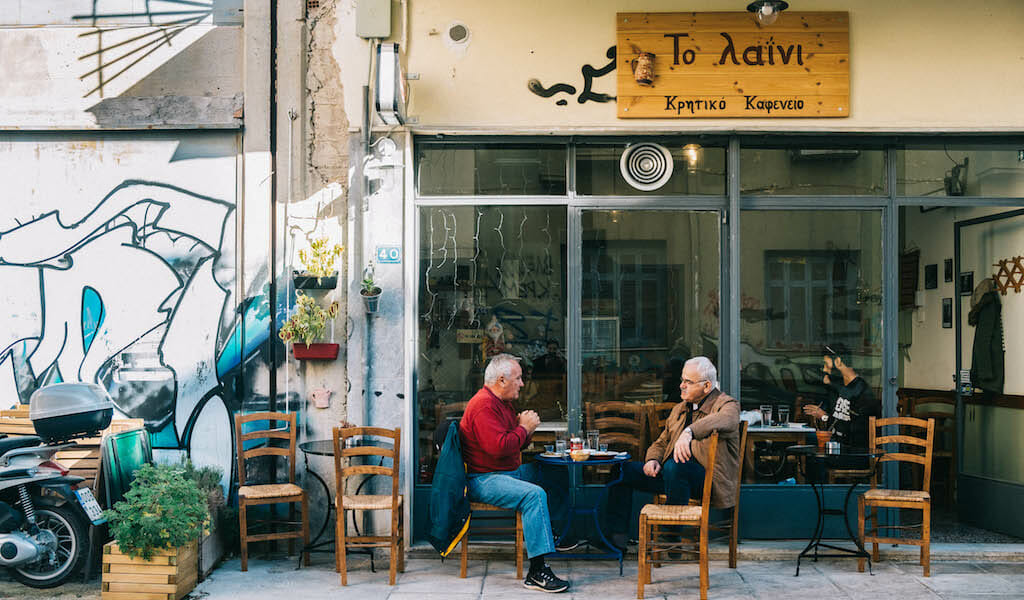 When childhood friends Yioula Svyrinaki and Michalis Psomadakis were planning last year to open up To Laini, a spot that would serve the kind of traditional food and drink found on their home island of Crete, it wasn’t very hard for them to decide on where to locate their new venture: the Keramikos neighborhood.

The two budding restaurateurs were already living in the area, but there was much more that made Keramikos an ideal choice for opening up their ten-table kafeneio, which on Crete refers to a no frills café that also serves food. Located just a ten-minute walk from Athens’ buzzing historic center, the laid back Keramikos neighborhood seems to live in a magical world of its own, a place where old and new, Greece’s storied past and often turbulent present, tradition and forward-looking creativity, all coexist happily together. 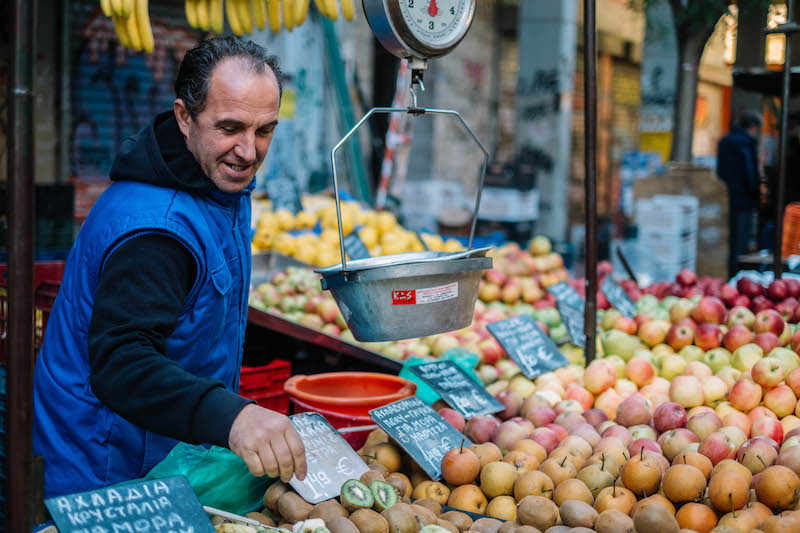 Famed in ancient times for its pottery – hence the area’s name – made from mud collected on the banks of a sacred river that once ran through it, in the last few decades Keramikos was better known as a run-down working-class neighborhood of closed factories and abandoned properties. The neighborhood’s struggles have paradoxically proven to be its savior. In recent years Keramikos’s low rents and old-time Athens feel have lured creative young Athenians – like To Laini’s Svyrinaki and Psomadakis – to the area, where they have opened up inventive restaurants, bars and cafés along with galleries and theaters. Joining Keramikos’s existing old-school establishments, these new spots have helped create one of the Athens’ most exciting dining and cultural scenes.

Just as Greeks are rediscovering their culinary roots, the world outside is also taking a new look at the country and its cuisine.

Keramikos may have its own unique vibe, but the story of the neighborhood’s rebirth and the success of a little place like To Laini, with its distinctly back-to-the-roots approach, is reflective of a deeper dynamic playing out in Athens. While for the last decade the city has been struggling with the impact of the ongoing economic crisis, which has also brought up some big questions regarding Greece’s self-identity and the country’s place within Europe, the hard times have also helped spark a process of rediscovery, with Greeks taking a new look at their own identity, their own resources and – most importantly from our perspective – their own culinary traditions and heritage.

Greece’s long-term economic recession has certainly created hardships, but it has also inspired Athenians to think creatively and move in new directions. That creativity is being expressed in various ways, from the graffiti murals covering the walls of some neighborhoods to the new art galleries and museums that are opening up. The economic difficulties have also led to innovative social entrepreneurship efforts, from the creation of a volunteer group that goes around Athens neighborhoods feeding the homeless to the opening of several cooperatively run bars and restaurants. 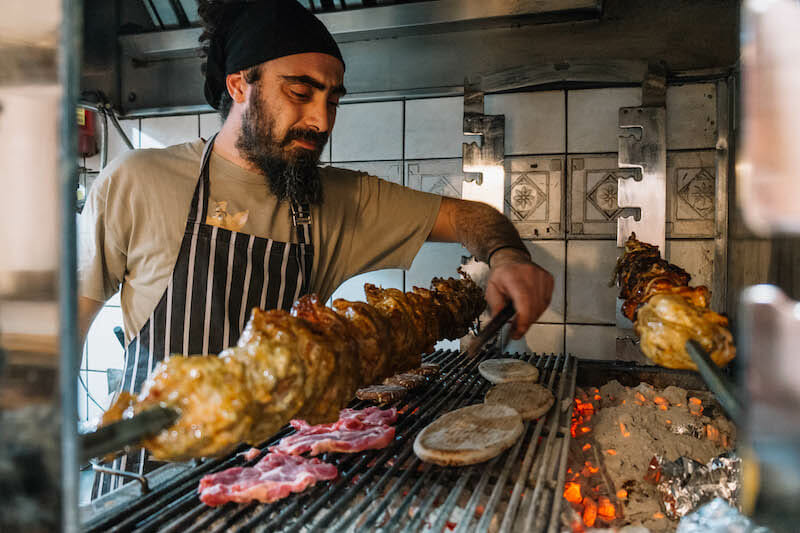 Pushed along by this surge of creativity, Athens’ culinary scene has been flourishing, with the emergence of both more ambitious restaurants and simple mezedopolio (meze spots) and souvlaki joints. What connects them all is a focus on drawing inspiration from Greek ingredients and culinary traditions, which in previous decades had sometimes been ignored or even looked down upon. Many restaurants have revised their menus over the last few years in order to focus on hyper-local products, digging deep to find regional ingredients that Athenians diners might be unfamiliar with.

These changes represent an important break with the past. During the 1950s and 60s, the trend in Athens was to emulate French cooking. It was a time when so many Greek recipes were “fused” with French culinary traditions – think dishes made with béchamel and crème fraîche. During the ’90s, culinary fashion saw a minimalist, European style of cooking take hold. This development was connected with the then rise in the standard of living and the boom days of the Athens stock market. As local prices rose and spending power increased, the Athens restaurant industry tried to build up the image of a European capital that was keeping up with international dining trends. 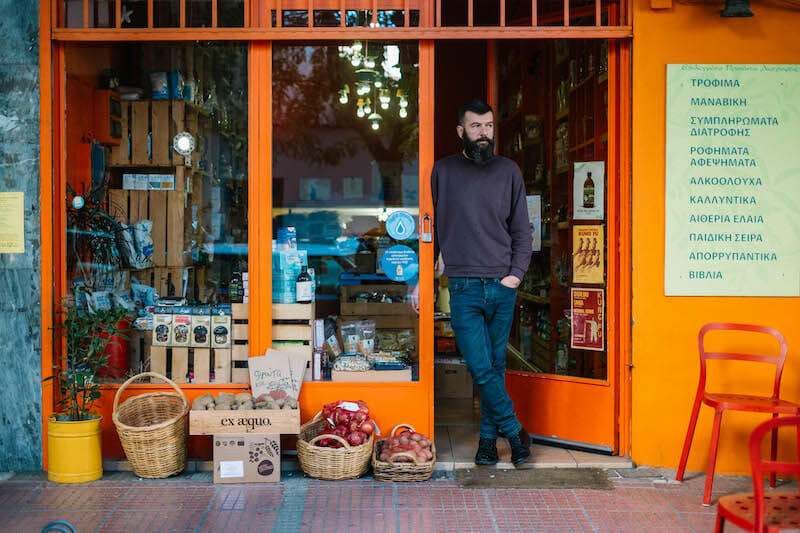 In the wake of the 2008 economic crisis, though, there was a shift towards rediscovering Greek cuisine. Creative Greek cooking became the new trend and Athenians became interested in trying out local products and exploring the traditional regional cuisines of Greece. Contemporary tavernas, like Seychelles in Keramikos, opened with success, offering a modern spin on the traditional, old-fashioned style of the past. Even more striking was the comeback of old-school establishments like the kafeneio, of which To Laini is a great example, and the pantopolio, a food shop that stocks all the basics as well as specialties like cheese, olives, cured fish and meat, and also serves a few simple dishes prepared in house. This style of simple eateries represents exactly what is popular right now – the use of local produce and ingredients to make simple yet tasty and hearty food that’s sold at affordable prices.

The new look that Greeks are taking at their own cuisine is also giving them a renewed confidence in promoting it beyond Greece’s borders. One of the interesting side effects of Greece’s recent economic struggles is that a cadre of educated young people, after being laid off from their jobs, went back to their family’s farms or traditional food businesses and helped them modernize by producing high-quality, smartly packaged artisanal products, many of which are now being exported to larger markets in Europe and beyond. As a result, Greece’s profile as a culinary destination has also been on the rise. These days, tourists are not just visiting Athens for its historical sites but also to learn about and enjoy the local food and wine developments. Just as Greeks are rediscovering their culinary roots, the world outside is also taking a new look at the country and its cuisine.

It’s too early to say that Athens has moved past the crisis of the last few years, but the city’s culinary scene provides hope that a new day is coming. Just come to Keramikos to get a sense of that.