In 2017, Shanghai’s longest-running open-air market at Tangjiawan Lu, which had provided the neighborhood with fresh produce, fish and seasonal foodstuffs for almost 115 years, shuttered its doors. The market and much of the area around the Laoximen metro station were some of the last historical (albeit run-down) structures in an otherwise central area full of expensive new residences. Construction has already begun on the entire city block’s worth of high-rises being built in its place, and the surrounding blocks – like many of Shanghai’s backstreets – are on notice, as the wrecking balls and construction crews continue to reshape the urban landscape at an incredibly fast rate.

The wholesale transformation of this particular area also forced the closure of Er Guang, our favorite late-night wonton stop. But luckily for us, and the crowds that used to line up for a to-go container of their signature pork and Chinese mustard green dumplings, they were able to relocate. We’re always thankful when our favorite spots are able to reopen or when new food options arise from the ashes, but that doesn’t change the fact that the few remaining pockets of atmospheric, traditional architecture and public space in Shanghai are steadily shrinking. 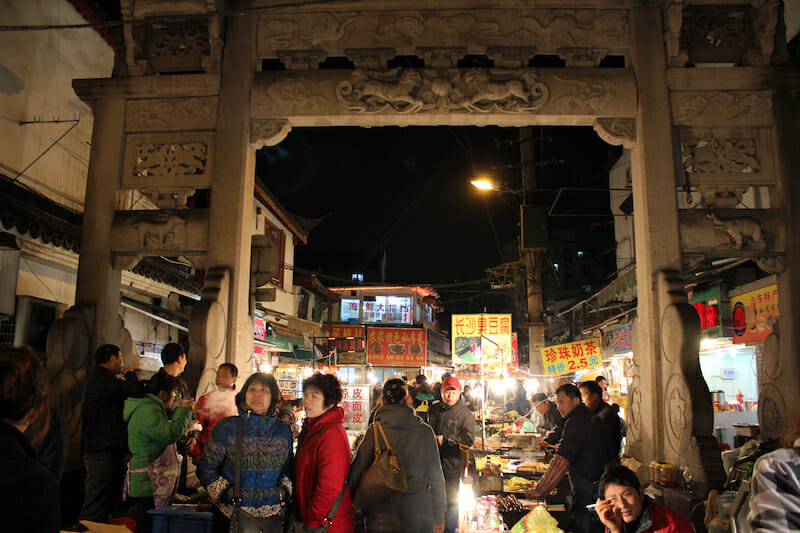 As we look back over the six years that we’ve been reporting from the city, it’s clear that breakneck economic growth has spurred massive change. But there’s another wildcard that has reared its head and immeasurably affected the cityscape, including its food scene, in more negative ways than we could have dreamed: top-down government changes.

In addition to the economic gains to be made from transforming Shanghai’s real estate, city officials in both Beijing and Shanghai have increasingly targeted dense housing and mix-used areas favored by low income migrants (and where more street food could still be found) in order to further their goals of capping the city’s total population. According to a recent report by the Guardian, both cities’ populations actually fell slightly to 24.18 million, with a goal of limiting Shanghai to a total population of 25 million. This planned gentrification succeeds in pushing lower income workers further and further outside the city limits increasing their commute times, and limits their chances of setting up food stalls right where they live. 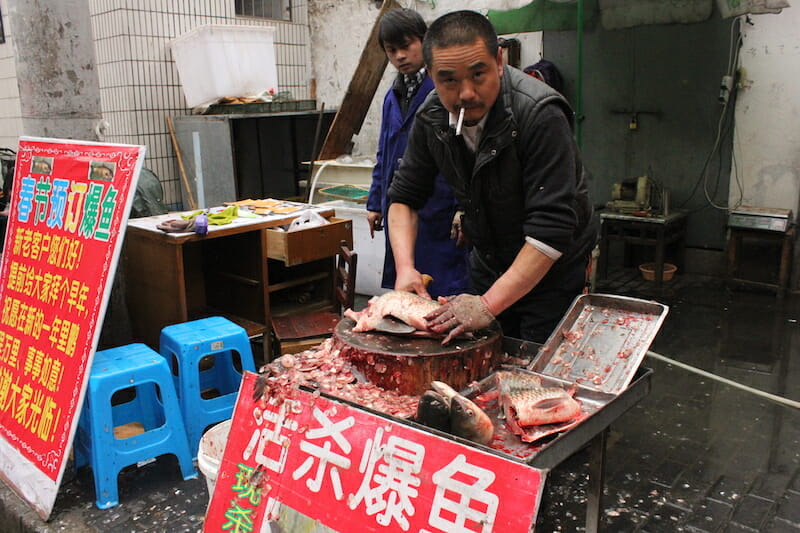 Perhaps as part of this new policy of making the city a less welcoming place for irregular workers and migrants, the days of laissez-faire enforcement in many aspects of daily life seem to be gone for good. Authorities are bent on bringing Shanghai in line with their interpretation of global standards by stepping up implementation of rules against sidewalk vendors, al fresco dining and government-owned buildings leasing out commercial space, and more strictly enforcing kitchen layout requirements, building codes and much more. In most cases, the laws were already on the books, but the decision to enforce them has brought vast changes, sometimes almost overnight. (Some believe this stricter approach resulted from a series of major food safety scandals that embarrassed China on the global stage.)

The roving street carts frying up fresh noodles and rice in woks were some of the first visible victims of this new crackdown. Although the occasional stand can still be found sporadically, the days of ayis (aunties) consistently working the same corner, where they served a stream of regular customers, are gone. The restrictions have only escalated, and instead of going back to “normal” after a period of enforcement, as locals have noted used to be the case, the rules seem to be sticking this time.

Many restaurateurs are giving up on the hassle of more atmospheric digs for the simpler parameters of a regulated space.

For now, with no end in sight, we continue to search for quality and authenticity, whatever that may look like in this rapidly changing city. With rents on the rise, one change we’ve noticed is the “upscaling” of some popular street food joints into more traditional storefronts. In some cases, this has given these spots a new lease on life, like the aforementioned grungy-but-delicious wonton shop Er Guang on Zhaozhou Lu, near the Tangjiawan Market. After being bricked up last year, new iterations have opened all around town. Their Dagu Lu location is so shiny it seems a poor reflection of their old identity, and the crowds haven’t come. Their Huangjiaque Lu location, however, retains a more ramshackle vibe, and there’s still sometimes a queue out the door. The fate of Er Guang seems to prove that heavy hitters with a solid following can keep their customers, even if the price point and locations have had to change with the times.

As more high-rises and malls crowd out the traditional digs around the Laoximen area, we’ve seen the continued exodus of many spots to the relative safety of food courts. Following the trend in Singapore and Hong Kong, mall dining in Shanghai continues to become better and better, with more high-quality restaurants replacing traditional fast food joints. As a result, many restaurateurs are giving up on the hassle of more atmospheric digs (and the neighbors, kitchen design and zoning problems that come with them) for the simpler parameters of a regulated space. 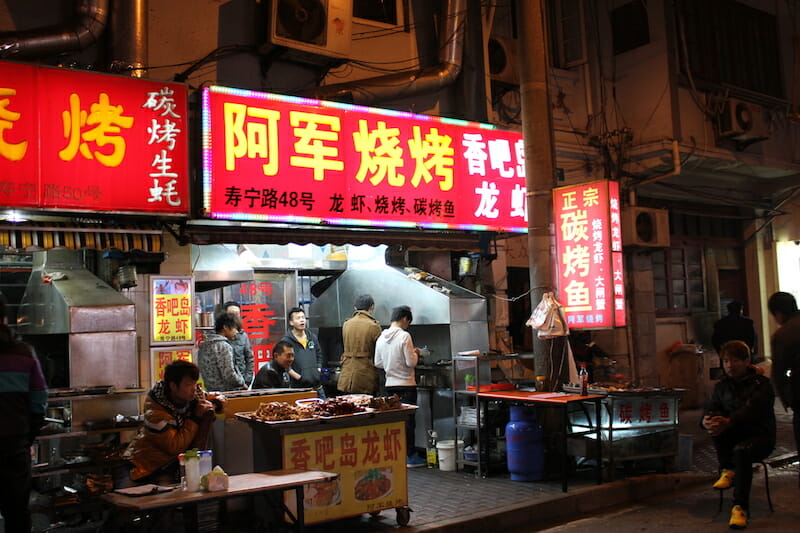 An important aspect of the increase in mall dining are the coffee and tea crazes that have hit Shanghai – there is a booming trade for both, and it’s hard to decipher which is more popular. On the one hand, the world’s largest Starbucks opened in late 2017 (with more than 14 times the daily revenue of an average U.S. store), and a plethora of locally owned shops have opened up in the downtown area. But tea was the big story of 2017, as Heytea’s cheese-foam-topped concoctions sparked hours-long queues; their success has helped give rise to even more mass-market shops backed by restaurant groups and big investments. Luckily, there’s always a subtle third-wave brewing in the background, and we’ve seen more refined and creative shops doing cold-drip teas, sparkling and juice mixes, alcohol additions and much more, that are well worth exploring.

For a touch of tradition, we still frequent our standby tea purveyor, Wan Ling. She’s just moved into a hidden garden home that’s now appointment only. Her selection of Fujianese teas (where she grew up) can’t be beat, and now she has the authentic old Shanghai ambience to match – it’s the perfect place to while away an afternoon learning about how to properly brew. 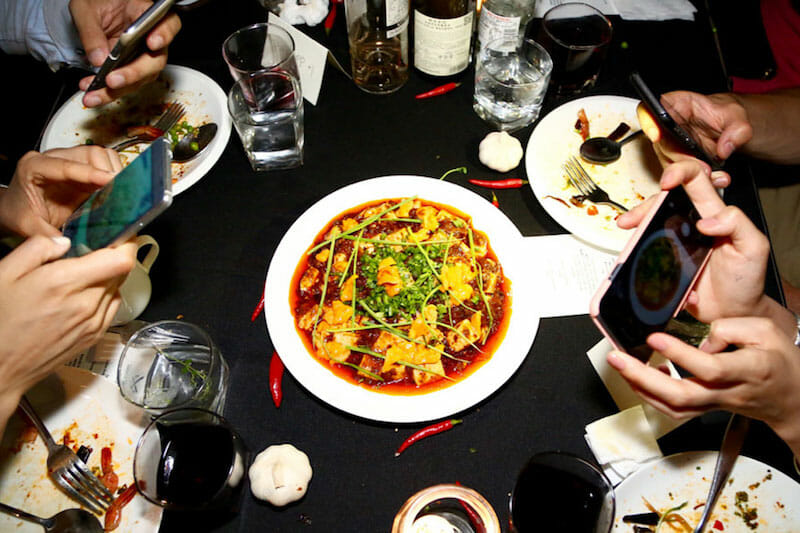 Two other themes that dominate practically every conversation about food in 2018 are millennials’ spending habits and their use of technology. As a result of the one-child policy, the demand for an active social life out with friends (more than family) has pushed the restaurant industry’s revenues ever higher. Dining out makes up 80 percent of all social activities, according to a recent survey (although, getting anyone to put down their phones to actually talk with each other is a whole other story). Additionally, 44 percent of millennials (those born between 1980 and 2000, according to most researchers) eat at home only two days a week or less. This particular market is clearly a prize worth fighting for.

On the technology side, the smartphone boom, free-flowing VC money and Shanghai’s population density have come together to create the ideal conditions for a booming food delivery market. In 2017, about 350 million people in China ordered food online, amounting to roughly half of all mobile Internet users, and an increase of 64.6 percent over 2016. There’s never been a better time to be lazy and hungry, but there’s also a good argument to be made that the boom may help increase the bottom line of vendors who are making popular traditional foods but struggling to survive with increasing rents. Indeed, our favorite fried dumpling vendor, Hu Jie, has an army of delivery guys ferrying out food during mealtimes, freeing up space in an otherwise crowded shop. But it’s still unclear whether these apps will help or harm restaurants in the long term. 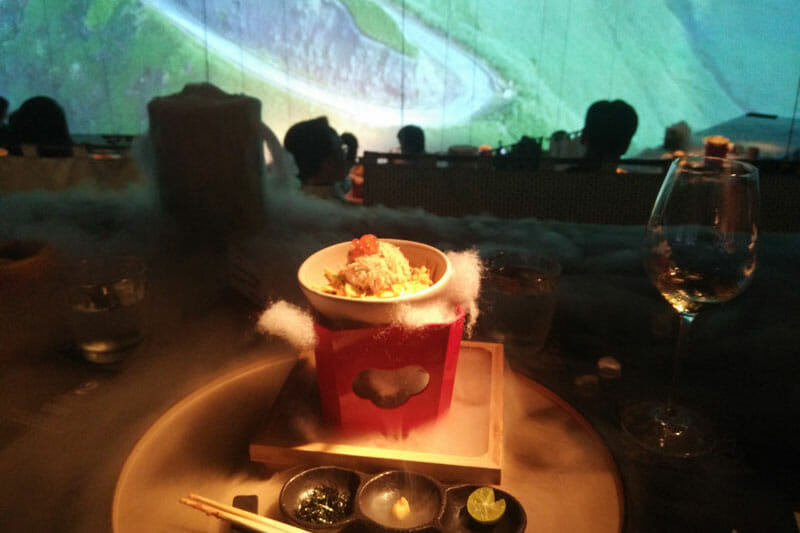 On the other end of the spectrum, high-end and international dining is marching ever forward. To survive in this arena in today’s Shanghai, it’s essential to capture the imagination of local diners – and they’re increasingly demanding ever more elaborate menus and well-designed spaces. Canton Table’s elegant renovation in the Three on the Bund building, for example, mimics traditional Shanghainese shikumen architecture and achieves a certain modern yet elegant nod to the past. Their dim sum brunch menu is reasonable for the fine dining space, but a braised dried abalone will set you back RMB 598 (around $95). Their prices seem modest, though, when compared to the 20-course tasting menu at Ultraviolet, Shanghai’s perennial over-the-top multisensory, avant-garde dining experience, which now costs RMB 6666 (around $1,000).

If anything is true about Shanghai, it’s that this is increasingly becoming the city where trends are born and change is embedded firmly in the DNA here. The constant transformation of old spaces, traditions and dishes is part of what makes dining out in the city so exciting. It can make finding “authentic” cuisine more of a hunt, but isn’t that also part of the joy of exploration?