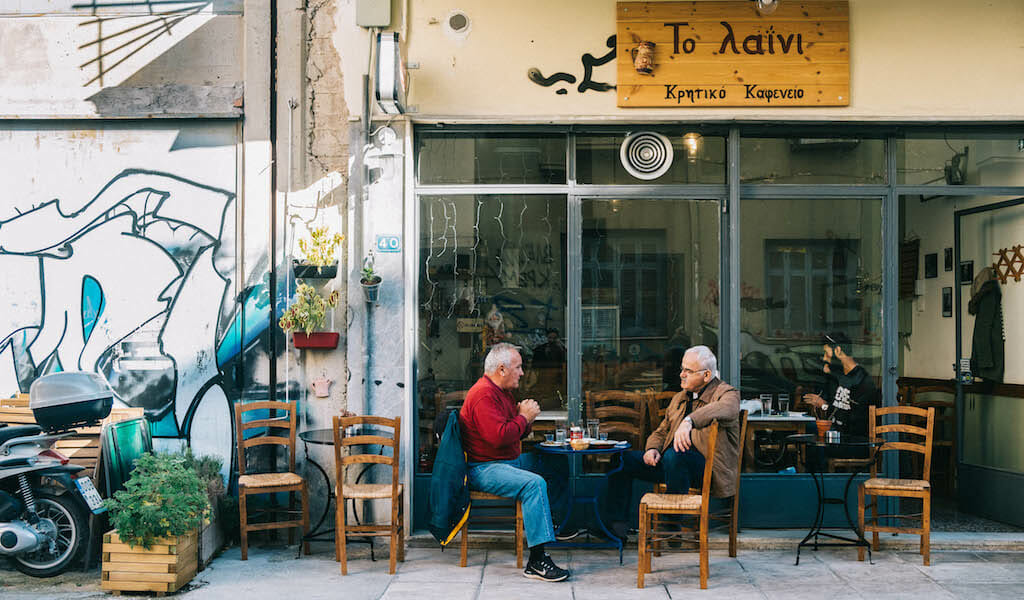 To Laini: Pass the Pitcher

The name of To Laini, a traditional-style kafeneio (a café that also serves food) specializing in Cretan cuisine, hints at what type of night one will have at this cozy spot. The word “laini” derives from ancient Greek and is widely used on Crete and the Cycladic islands to describe the small ceramic pitcher used to transfer water, wine or tsikoudia (a traditional Cretan spirit made from the distillation of grape pomace). Let’s just say, they’ll be transferring a lot of ceramic pitchers to your table over the course of a meal.

The spot was opened in March 2017 by two childhood friends, Yioula Svyrinaki and Michalis Psomadakis. They both grew up on Crete, the island known for its rich cuisine and high-quality food products. About five years ago, they both decided to move to Athens, moving into separate apartments in the Keramikos neighborhood and found jobs. Yioula started working for a Cretan deli downtown and Michalis in construction. But as they worked these days jobs, they were hatching a plan to open a traditional Cretan kafeneio in downtown Athens. Something simple, similar to the typical kafeneio one would find on Crete: small, cheap, welcoming, serving great tsikoudia and good food. 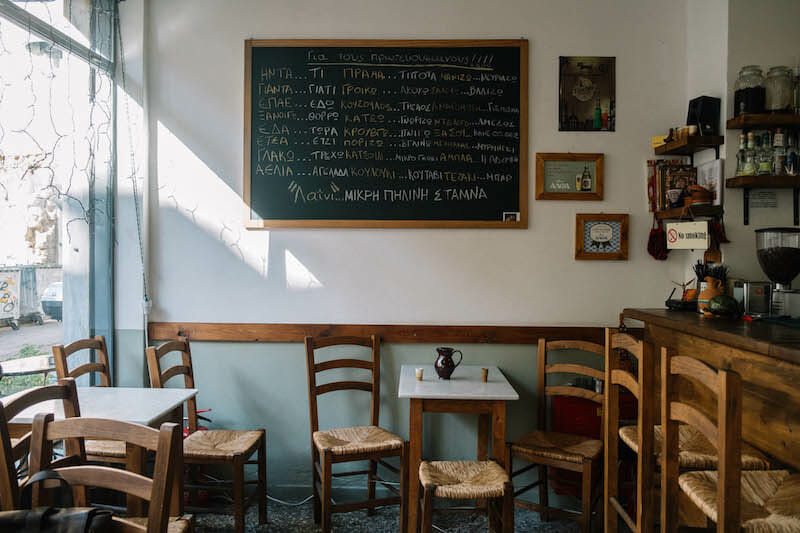 Their space is just that – it’s quite small, with no more than ten tables in total and a bar. Their open “kitchen” behind the bar consists of a couple of electric stoves, a camping gas canister and a portable little oven. When we first saw it, we wondered how they managed. But when there’s a will – and we would add, a love for food – there’s a way.

Their guiding philosophy is to offer dishes made with high-quality products, cooked with love and at a low price point. Everything they serve, both food and drink, comes from Crete, either from family members there or other small producers they personally know and work with. Luckily, the main distributor delivering food products from different parts of Greece to Athens is nearby.

They start serving food at 10 a.m. and most customers start with a coffee, which comes with a complementary treat, either a bite-sized loukoumi (similar to Turkish delight) or a traditional handmade spoon sweet (fruit preserves), which they make in two flavors, quince and grape. If you’ve already had your coffee try one of the traditional Cretan herbal teas on offer – many argue that these are the secret to the high longevity rates on Crete. 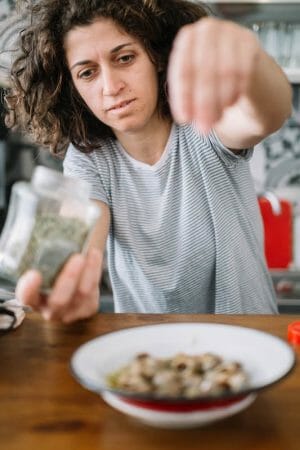 When we go in the morning, we always order a Cretan-style breakfast, which includes the popular sfakianopita, a pie that is somewhere between a crepe and a pancake stuffed with white creamy Cretan cheese, drizzled with honey and often sprinkled with cinnamon on top – a guaranteed delight. If we’re nursing a hangover, we go with the eggs fried in staka, clarified butter made from traditional Creten goat’s milk mixed with barley or wheat flour.

If you come in the evening, they immediately welcome you with a complementary shot of tsikoudia – be prepared for many more to follow. Food-wise, their regular menu is short but satisfyingly good, including the typical Cretan meze dishes you would expect to find in a kafeneio on the island, like hohlious boubouristous (snails sautéed in salt, vinegar, olive oil and rosemary), pickled artichokes, dakos (barley rusks topped with grated tomatoes, olive oil and crumbled feta or Cretan xynomizithra cheese), apaki (herb-smoked pork or chicken), fennel pie and Cretan sausage.

To Laini is clearly a family affair, and one that extends beyond the kitchen in Athens.

Alongside those delightful bites, they also serve dishes of the day, seasonal and always Cretan. On recent visits their daily dishes have ranged from sioufixta (traditional Cretan-style handmade pasta) served with a minced meat sauce and Cretan anthotyro cheese to symbetherio, a famous Cretan casserole made of snails, eggplant, zucchini and potatoes.

Like many simple eateries or tavernas around Greece, To Laini is clearly a family affair, and one that extends beyond the kitchen in Athens. During May and early summer they serve zucchini flowers stuffed with rice and herbs made by Michalis’s mother, and all year long Yioula’s grandmother prepares her best dolmades (grape leaves stuffed with rice and herbs). The rabbit that they often cook as a daily special either in a tomato sauce or with a rosemary and lemon sauce – both delicious – is sent straight from Yioula’s mother’s farm on Crete, as is the lamb that they cook with greens. Their olive oil is also exceptional and, no surprise, comes from their family olive trees and is extracted in Sivas, a village on Crete, at a traditional olive oil press that belongs to Yioula’s brother-in-law. 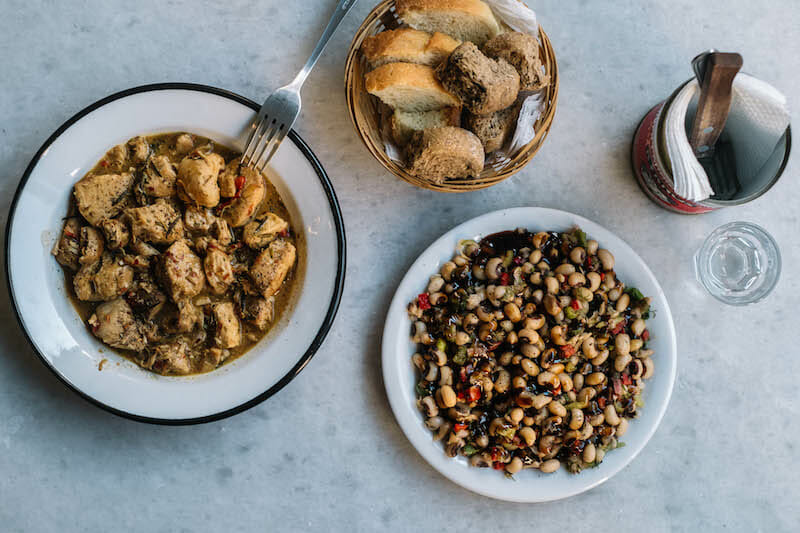 Cretans usually start off drinking tsikoudia and once they’ve had enough they switch to wine. If you can last through the tsikoudia stage, try their Cretan Marouvas wine, a red wine aged in oak barrels for at least 6-7 years. Food is served here until late – we once closed down the place around 2 a.m. On Sunday evenings, after 6 p.m., a group plays live Cretan music, which results in lots of singing, dancing and, of course, the consumption of more booze. When you’ve reached your limit and ask for the bill, it will arrive with another complementary shot, this time of their homemade rakomelo (tsikoudia mixed with honey and orange).

This is the type of place that could easily become a favorite haunt. You gradually become friends with the owners and other regular customers, you learn their menu by heart and you end up spending half your day there every time you go, passing the pitcher around and around. 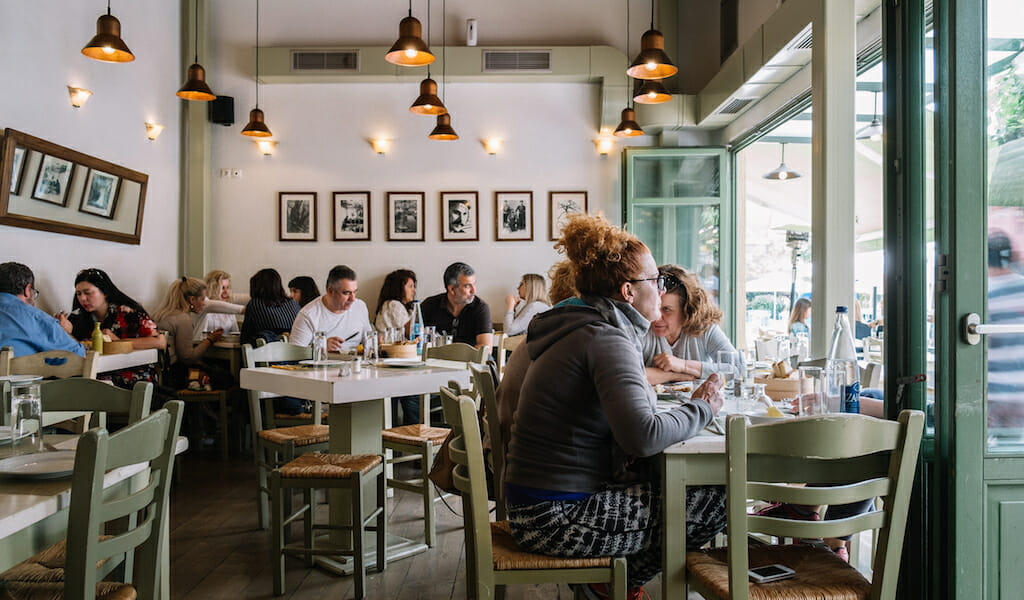 Athens | By Carolina Doriti
By Carolina Doriti
AthensThe neighborhood of Kesariani, built on the lower slopes of Mount Hymettos and located around 3 kilometers east of central Athens, has long been a culinary destination, particularly for seafood (even though it’s nowhere near the water). Many of the old seafood restaurants survive to this day although the neighborhood’s offerings have expanded to include… 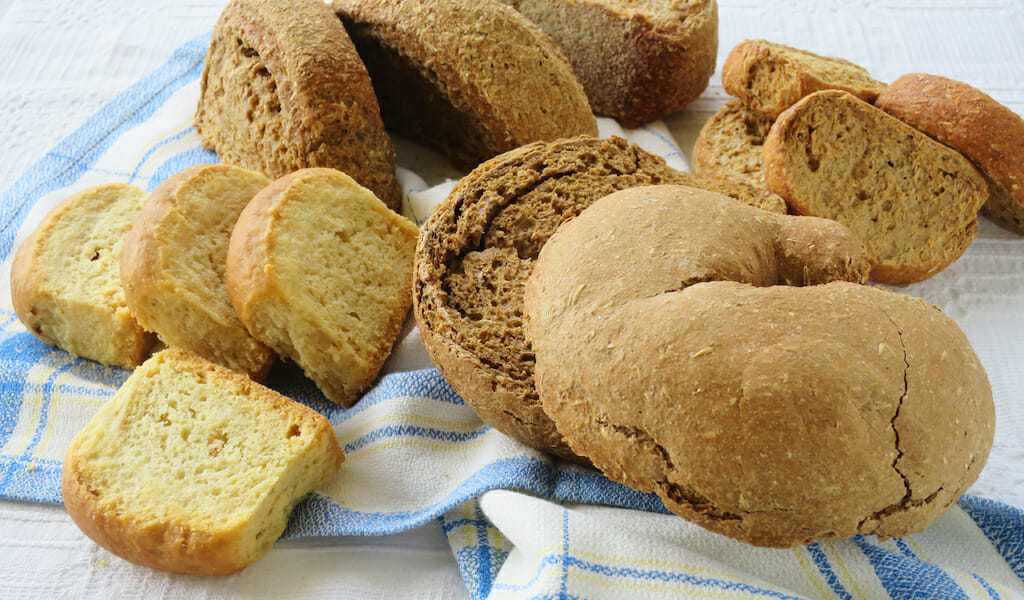 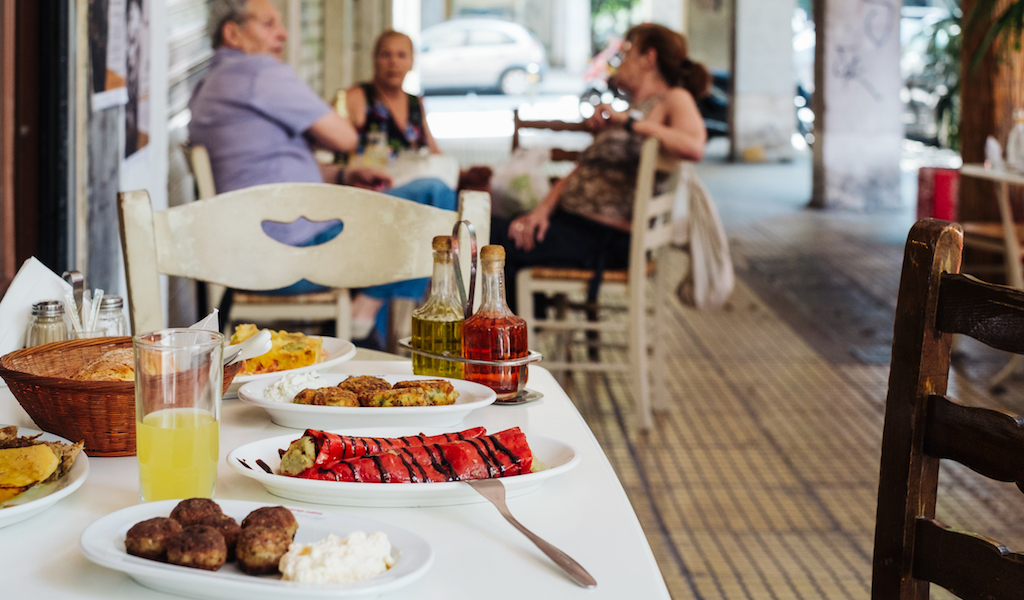 Athens | By Carolina Doriti
By Carolina Doriti
AthensA neighborhood on the southeast side of Filopappou Hill, between Acropolis, Petralona, Kallithea and Neos Kosmos, Koukaki was named after one of its first residents, Georgios Koukakis, who in the early 20th century opened a successful factory there manufacturing iron beds. Gradually the area developed into a charming middle-class neighborhood, full of life and –…
To Laini
Artemisiou 40, Keramikos
Tel. +30 6979 122343
Hours: 10am-2am