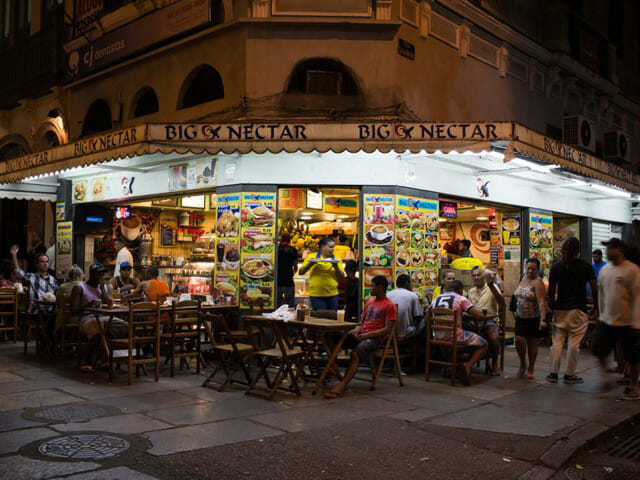 Rio: State of the Stomach

Editor’s note: As of this week, Rio de Janeiro joins Culinary Backstreets as our sixth city. We’re thrilled to have expanded to four continents, and are looking forward to sharing with readers our explorations of this exciting city’s dynamic food scene.

Like many things in Brazil’s beachside, party-hard Carnival city of Rio de Janeiro, gastronomy has a hedonistic edge to it. Sizzling rows of chicken hearts sold on a stick from sidewalk grills, gooey cheese rolls for breakfast, beer with lunch, fat skewered shrimp sold by ambulant vendors in Ipanema so that beach-goers need not lift themselves from their towels to nibble – these are just another day in the culinary life of cariocas, as residents of Rio are called. With such indulgences all around, it comes as no surprise that Brazilians traditionally offer guests an orange slice at weekend feijoada (beans stewed with fatty pork) get-togethers to help with digestion.

But don’t be fooled into thinking this is a city just of beans, meat and beer. Brazilians pride themselves on a history of miscigeneção, racial and cultural mixture. The colonial power established by Portuguese explorers in 1500 imported far more African slaves through the centuries than even the United States: some estimates say Brazil took in 30-40% of the trans-Atlantic human slave trade. The Africans who were brought over mixed with a vibrant indigenous population and, later, waves of immigrants, including large groups of Japanese, Italians, Germans and Lebanese. Brazil’s most recent census showed the country to be “majority-minority,” meaning that no single race accounted for more than 50% of the population. Middle Eastern esfihas (thin-breaded triangles with meat, cheese or spinach filling), shrimp stroganoff, and sushi with kiwi or strawberry are a few of the ways cariocas have brought the culture of miscigeneção to their dinner plates.

In addition to the human diversity, let’s not forget about nature’s bounty here. Brazil’s extensive territory – the country covers nearly half the South American continent and is the fifth-largest in the world – means a variety of ecosystems and one vast breadbasket. Avocados grow to the size of footballs. Cariocas are so particular about their bananas that supermarkets sell a variety of flavors and sizes to please each client’s taste. (Banana d’água is one of the sweetest, while a bananinha is so small that it can fit in the pocket as a snack.)

Even with a continent of choices at their fingertips, cariocas often stick to the basics: a plate of garlic-infused rice, stewed black beans, couve (collard greens, sometimes erroneously translated as kale), ground manioc root and a grilled meat is so standard that Rio’s ubiquitous lanchonetes (snack bars) advertise it simply as a refeição, or “meal.” But that’s just for starters. Rio’s juice bars pride themselves on menus that stretch across their walls with countless varieties of mixing options, such as maracujá (passion fruit) with tangerine or orange with couve. Avocado also finds its way to the juice menu, as cariocas treat it as a sweet, and some of the most inventive bars even offer eggplant as an uncommon juice mixer.

Rio’s botecos (small bars) are so plentiful that they have a variety of names, including botequim, barzinho and pé sujo (“dirty feet”), to refer to the grubbiest of them all. Expect a boteco to offer fried yucca root, eaten like a giant french fry; pastéis, or fried pockets with meat and cheese fillings; and small pots of black bean soup garnished with parsley and deep-fried bacon chunks.

In a city that, after being seen as unsafe and stagnant for decades, is quickly reinventing itself as a posh metropolis eager for comparisons with New York and Paris, some of the tastiest treats come from the least pretentious of places. Hot dog vendors will surprise and then delight an out-of-towner, as the wiener comes not just with ketchup and mustard, but also with hard-boiled quail eggs, peas, raisins, potato sticks, and diced tomatoes and onions. Tapioca carts fry up what look like bits of Styrofoam to make a lightly salted pancake with fillings like banana, cinnamon and cheese. Kiosks on the beach make some of the city’s finest caipirinhas, the national drink: cachaça (a sugar-based alcohol suited for those who like to taste their alcohol), shaken with ice and fresh fruit.

Rio is a city that cuts no corners when it comes to making its grub gostoso, which, in Portuguese, is used both to mean “tasty” and as a typical pick-up line to call someone attractive. If – as is popularly said here – God is Brazilian, Rio would be its Garden of Eden, brimming with the fruits of temptation.