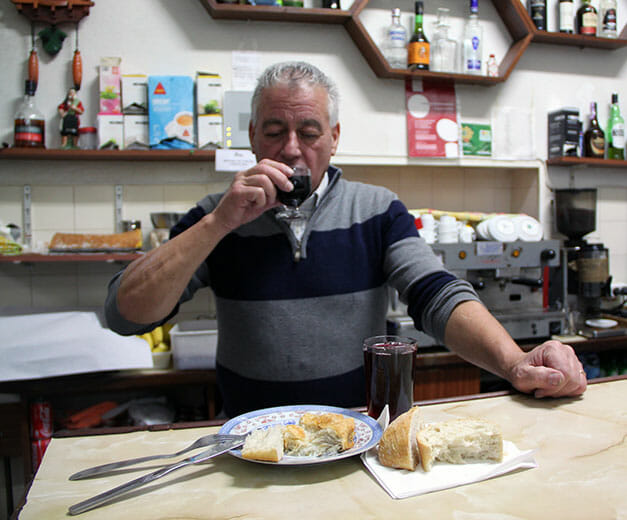 Lisbon: State of the Stomach

Editor’s note: We are very happy to be able to add Lisbon to the list of cities CB is covering. Our coverage of that city’s deep and fascinating culinary scene begins today, with our report on Lisbon’s State of the Stomach.

Lisbon, one of the world’s oldest cities, has a grand and turbulent past. Due to its position on the Atlantic Ocean, the Portuguese capital has been an important international trading post for centuries, flooded by a wide range of cultural influences and culinary tastes. The Romans, Arabs and Phoenicians all left their mark here, particularly with that lasting and classic trilogy: bread, wine and oil. The trade route opened by explorer Vasco da Gama in the 15th century also brought in spices and herbs little seen elsewhere in Europe at the time, and spices such as saffron, pepper, cinnamon and nutmeg are still integral to Lisboetas’ kitchens today.

Due to the imposing presence of the Atlantic, fish and crustaceans represent a considerable part of local gastronomy; the city has plenty of marisqueiras and cervejerias where it is possible to eat for a decent price the crabs, clams, mussels, barnacles and other shellfish sourced along Portugal’s rich coastline. The types of meat available are just as varied, the most symbolic offering being cozido, a traditional slow-cooked stew with pork, smoked sausages (morcela, farinheira and chouriço), assorted offal and chicken and other regional variations. It’s hearty fare, and is of course a vegetarian’s nightmare.

Eating local here has always been the norm, with simple fish, meat and vegetable dishes reflecting a home-grown agricultural landscape. Every neighborhood has its own distinct restaurants and tascas (modest, canteen-like cheap eateries patronized mainly by local residents) – many of which are still around thanks to strong community dependence and low rents – meaning you are never far from a simple and honest meal that is usually served in abundant portions. The city’s food culture is also imbued with regional diversity due to internal migration; take the many different recipes used to cook the typical salt cod, perhaps now a cliché, but which is still one of the most appreciated dishes in Portugal. Sardines and mackerel are also a Lisbon classic, particularly when June comes around. The image of smoky and improvised grills on the winding stone steps of historical neighborhoods such as Alfama has unsurprisingly become a culinary draw, even outside of the festival season.

And yet, while Lisbon’s food traditions have clear staying power, the city’s dining scene is also experiencing a transformation, thanks to a reconnection with the rest of Europe and socio-spatial urban changes. It’s not that surprising, considering that the city had a period of isolation: 48 years of dictatorship and decades of degradation due to general impoverishment had in some ways frozen it in time. After the 1960s, a considerable demographic decline and a dearth of architectural restoration (the latter most visible in the desertion of downtown Baixa) had given Lisbon a certain charm – and a forgotten and decadent heritage that still held some secrets.

In the last few years, this historical allure, as well as other obvious factors – the city’s seven hills, omnipresent Tejo River, sunny climate and cheap beer – have been seized upon by promoters of tourism. The impact of this new industry is so considerable that residents have created a new word, turistificação, or touristification, that is often palpable among the tacky eateries that have started appearing, especially in the old town center. In parallel to the downtown urban rehabilitation plan and the arrival of international investors, the city is abruptly changing, sprinting through a type of globalization that has already peaked in other southern European capitals. One consequence is that the culinary offerings can have an exaggerated “authenticity,” rebranding national identity with overpriced traditional food that is, unfortunately, not what it seems when it comes to quality.

Yet, there is a visible growth in variety, which is also changing the tastes of locals. Gourmet fusion and fast food have been booming, exemplified by the mutating state of one of Lisbon’s famous historical markets – Mercado da Ribeira, located in Cais do Sodré, not far from the river. This old marketplace has recently been split into two parts: one in which stands sell fresh produce as they have been doing for decades, the other sponsored by the Portuguese edition of Time Out magazine, hosting more than 30 trendy restaurateurs serving fare such as posh burgers, sandwiches of salmon and squid, croquetes of alheira (traditional sausage made with veal, duck, chicken, quail or rabbit and bread), sushi and escabeche. This contrast reflects the duality of Lisbon’s current eating habits.

There is also bottom-up diversity in the city’s food offerings, if you know where to look. The historical neighborhood of Mouraria was known until a few years ago as a downgraded quarter, but has recently been promoted as a diverse and multicultural area. Here, Chinese restaurants (sometimes informally hidden on the first or second floor) together with tiny Indian, Bangladeshi, Pakistani or Angolan kitchens, populate the narrow backstreets that were previously avoided by locals and tourists alike. It’s true here as it is in any of Lisbon’s other districts: If you avoid the main drags while your stomach is growling, a thoroughly satisfying meal awaits.