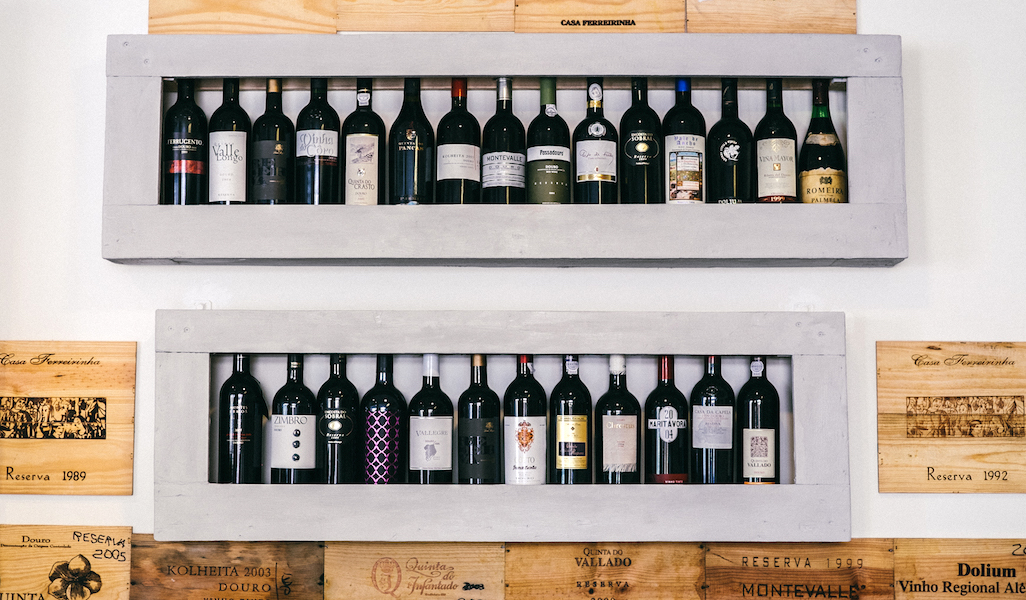 Tasca Tables: Stop do Bairro, the Rebirth of a Classic

“The reports of my death have been greatly exaggerated.” There is no better way to describe what happened to Stop do Bairro, one of Lisbon’s landmark tascas, than to give it a voice and use the famous Mark Twain quote.

Indeed, there were reports of its death when the doors of its original location, in the Campo de Ourique neighborhood, were shut last April after negotiations with the landlord for a new lease contract failed. 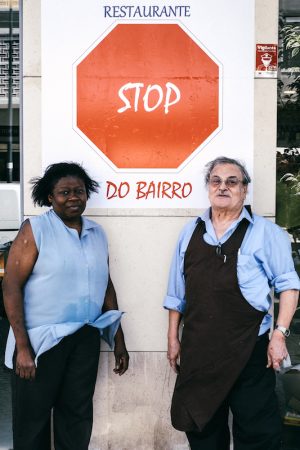 Stop do Bairro had existed in the same building and with the same proprietor, João Sabino, for 43 years. He was not a young man anymore – he’s now almost 80, actually – and many doubted whether he had the energy to start everything from scratch, like he did in 1974, after a brief career as a goalkeeper for Belenenses, one of Lisbon’s soccer teams.

Things were looking dim. Rent prices had soared so high in Campo de Ourique that it was impossible to stay in the neighborhood. Keep in mind that Stop do Bairro translates literally as “the neighborhood stop,” so it didn’t make sense to move further to another area. Or did it?

“We tried everything we could to stay in Campo de Ourique,” says Januário Paiva, a long-time customer who turned into Mr. Sabino’s new associate. But then they found a location in Campolide, a tight thatch of small, busy commercial streets and quieter backstreets lined with low rise 20th-century apartment blocks on the northern edge of Lisbon’s old town, a borderland straddling the city’s historic and modern districts. Mr. Paiva thought to himself: “Well, why not move here?” When he first posed the question to Mr. Sabino, he answered with a newfound energy: “Let’s do it.”

“For 43 years I didn’t take vacations. I didn’t even know what ‘vacations’ were.”

So they did it. It took some time to renovate the new building. Too much time, says Mr. Sabino. “For 43 years I didn’t take vacations. I didn’t even know what ‘vacations’ were. So I was a bit bummed that I had to close for six months.” When the restaurant finally reopened last September, he was as happy as a kid in a candy store.

Let’s be honest: the new dining room doesn’t have the tiles or the unique, classic feeling of the old place. “They [the tiles] broke as soon as we took them off the wall,” explains Mr. Paiva. Fortunately, the soccer scarves and shirts were more robust and are now hanging on the new walls, with Mr. Sabino’s favorite three conveniently highlighted: “They were offered by José Mourinho, Eusébio and Sporting’s goalkeeper, Rui Patrício,” he tells us.

The talented cook, Dona Rosa, an Angolan who has been working with Mr. Sabino for the last 30-plus years, has a new, much bigger, kitchen. At first, she was afraid she wouldn’t get used to it but that feeling lasted less than a week. The dishes that made the restaurant famous, served in generous portions, taste exactly the same: the monkfish rice, a recipe invented by Mr. Sabino in the 70’s, the ossobuco (veal shanks stew), and the cozido à portuguesa (portuguese boiled dinner), which has been served religiously every Wednesday during the colder months of the year. 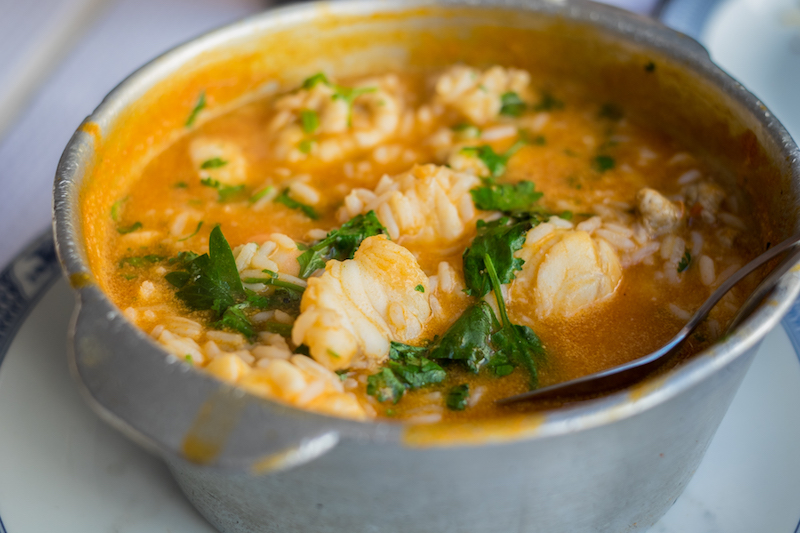 Desserts are also a strength. Especially the creamy chocolate cake, which is still made by Dona Teresa, their former neighbor in Campo de Ourique. She also does a killer encharcada, a soft scramble of egg yolks, sugar syrup and cinnamon, a conventional sweet originally from Alentejo. For those who can’t decide there’s the option of combining several desserts on just one plate, a formula that in Portugal has the inexplicable name of pijaminha (literally, “a small pajama”).

After dessert, make sure not to miss Mr. Sabino’s special “iced tea,” as he calls it. It’s actually a fermented quince brandy made by an ancient 106-year old man in a small village near Viseu, 300 kilometers north of Lisbon. “I once asked him what was his secret, how could he still be living and working at that age. He didn’t say a word, just filled a glass with it and drank it all at once,” reveals Mr. Sabino while pouring himself the same drink. It just might be the elixir of youth that keeps the man and his restaurant going. Cheers to that.

Editor’s note: This piece is part of our regular feature, Tasca Tables, which covers Lisbon’s tasca scene. Tiago Pais is the author of “The 50 Best Tascas of Lisbon.” 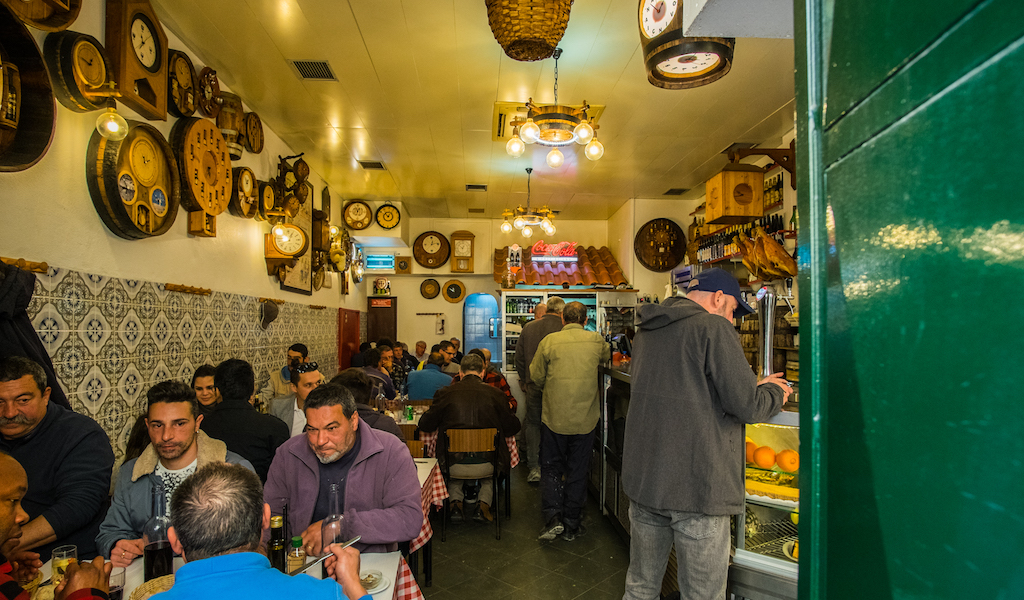 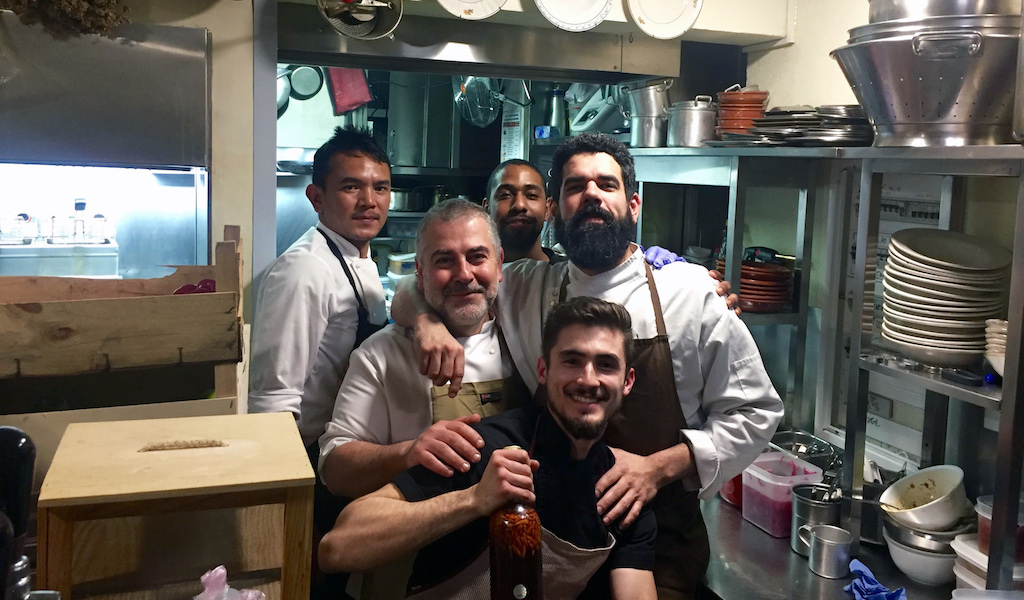 Lisbon | By Francesca Savoldi and Syma Tariq
By Francesca Savoldi and Syma Tariq
LisbonOn a steep, narrow curve that winds up from Santa Apolonia station, a growing group of people waits. Whatever the weather, a small crowd will always be there, ready for the low doors to open at 8 p.m. Taberna Sal Grosso, which seats around 25 people, has been holding its own, quietly, for five years.…
Stop do Bairro
Rua Marquês da Fronteira, 107 (Campolide), Lisboa
Tel. +351 21 585 2893
Hours: Tues.-Sun. noon-midnight; Mon. noon-5pm