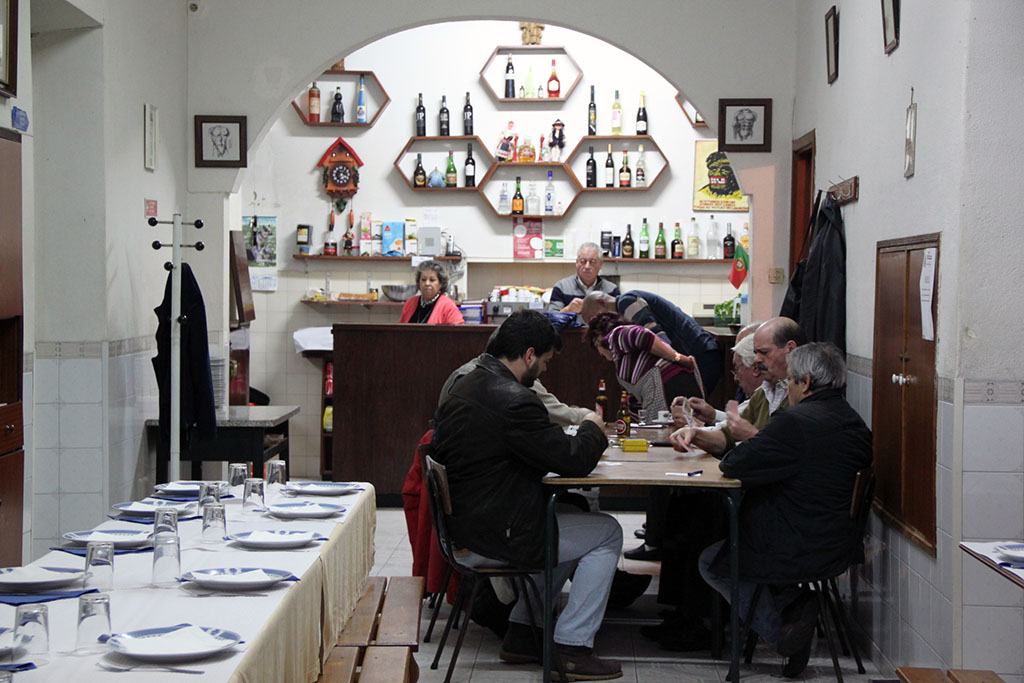 Portuguese regional food can be found easily in Lisbon, but at Grupo Excursionista e Recreativo Os Amigos do Minho, it is one of its raisons d’êtres. This warren of rooms that occupy a 19th-century tile-clad building not only works as a restaurant; the small cultural association has been a point of encounter for internal migrants moving from the northernmost Portuguese region of Minho since the 1950s. For all that time, this humble spot has kept the Minho culture alive in the capital, as well as renting out the space to young music promoters and cultural producers. Here you can experience rowdy parties with northern-style dances, live performances of the “concertina” (a typical accordion from the region) and, most importantly, group dinners with local, traditional food.

Regional gastronomy in Portugal is extensive and unusually diverse for such a small country, due to differing climates along its latitude and the range of cultural influences related to different historical conquests. Minho valley itself has its own special environment, characterized by green hills, plentiful forests and vineyards surrounding the fog-covered, mythical Minho River – all of which has clearly influenced the gastronomy. Os Amigos do Minho’s chef, Senhora Conceição, counts among her star dishes pork leg with chestnuts, bacalhau à Minhota (cod dipped in flour and eggs before being fried) and vitela à Minhota (stewed veal in red wine). 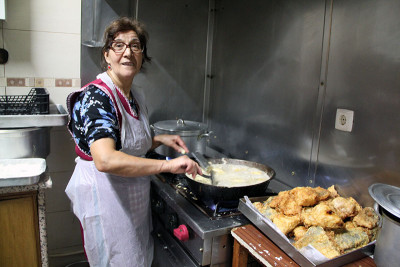 But she also knows how to cook the perfect caldo verde, a classic Portuguese soup that originated in Minho, made with potatoes, kale, olive and garlic or onion, often with a slice of chouriço.

The association is located in a historical building that maintains a folkloric, retro charm. Mr. Zé, Os Amigos do Minho’s president, told us that despite the recent gentrification process in the Mouraria neighborhood, little has changed behind the association’s grand red door – be it recipes, interiors or, so far, the rent. He is happy with the new population because they have suddenly regained customers lost during the hard times seen in the district over the last 25 years.

However, due to the current urban rehabilitation process, accompanied by barely controlled real estate speculation, the owner is ready to sell the building – and apparently, the buyer wants to demolish. Mr. Zé is struggling against this process. A returnee from the colonial war in Angola in 1975, he has been taking care of Os Amigos do Minho for the last 40 years, not only managing the association but also lovingly maintaining the vines that hang down onto the rooftop, which he uses to make homemade wine for customers. The grape variety is from Minho, of course: morangueiro, which originated from an American grape variety introduced to Europe at the end of 19th century to counter the spread of phylloxera, a pest that is fatal for commercial grapevines. Curiously, because of the fact that it was foreign-born, the Salazar dictatorship attempted to ban the disease-resistant grape – luckily, it didn’t succeed.

Even if enologists would probably turn their noses up at this intensely fruity, punchy wine, here it is made fresh, and drinking it on the terrace overlooking Lisbon’s rooftops is a unique experience. “Despite our age and the legal struggle with the landlord, 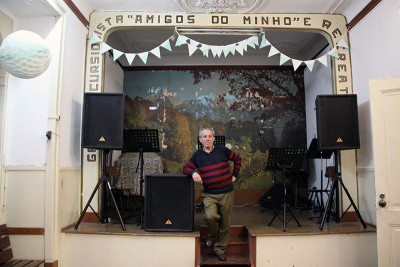 we have a lot of goodwill, and want to continue to take care of the building and keep organizing activities here,” Mr. Zé says.

In the same narrow road, another similar regional house is hidden among the numerous South Asian restaurants that characterize Rua do Benformoso. Casa da Covilhã is a picturesque place, promoting the cultural heritage of a tiny city at the foot of Serra da Estrela, the highest mountain range in Portugal. This association is even older than Amigos do Minho, and during the last 80 years it has been a meeting point for migrants who moved from Covilhã to Lisbon. We went to the kitchen with Senhora Guida, who revealed a key methodological secret to preparing the classic local dish, cabrito assado no forno (goat roasted in the oven): “It is important to soak the meat in white wine, garlic, pepper, laurel leaves and parsley for a few hours before baking it,” she says. “But the final touch is cover it with a flood of melted butter.”

Everything the chef cooks is from the traditional cuisine of the Estrela mountains, a protected area with an unexpected “alpine” landscape that’s home to a few villages that date back to medieval times. Typical ingredients from Covilhã include boar, goat and the famous queijo Serra da Estrela, an excellent sheep cheese that is creamy inside and was recently included in the international catalogue of endangered heritage foods. Standing up at the bar after dinner, there is one specialty that can make you risk forgetting what you have eaten – a final shot of aguardente de zimbro, a fiery brandy made from a local type of juniper, a true taste of Covilhã for the homesick. 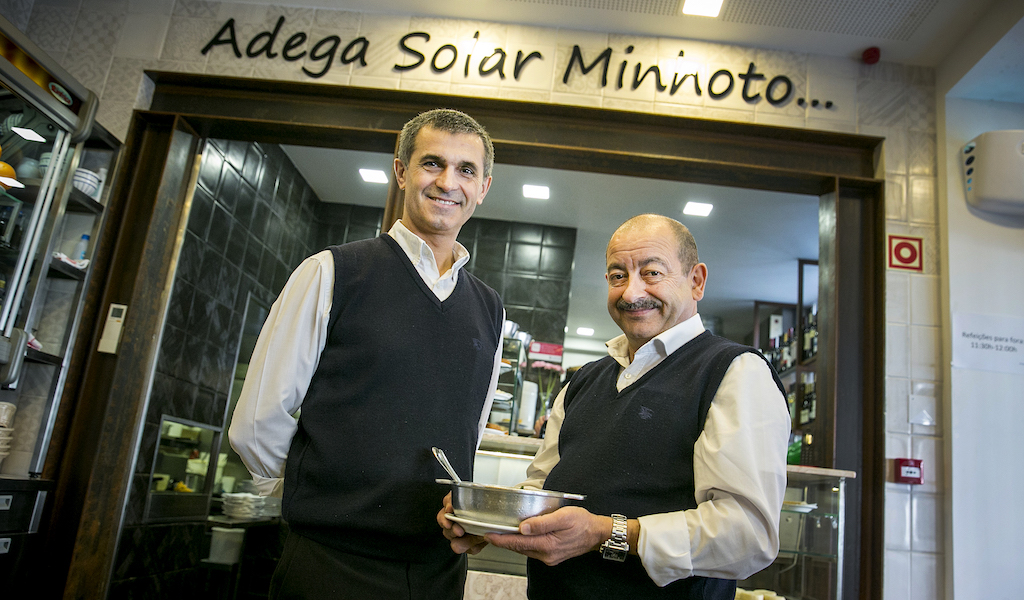 Lisbon | By Célia Pedroso
By Célia Pedroso
LisbonThe clock strikes 11:55 a.m., and the tables at Adega Solar Minhoto are already filling up with hungry customers. Many are regulars who come daily – they know that this traditional restaurant in the Alvalade neighborhood doesn’t accept bookings and is packed by midday, requiring a bit of a sprint if you don’t want to wait… 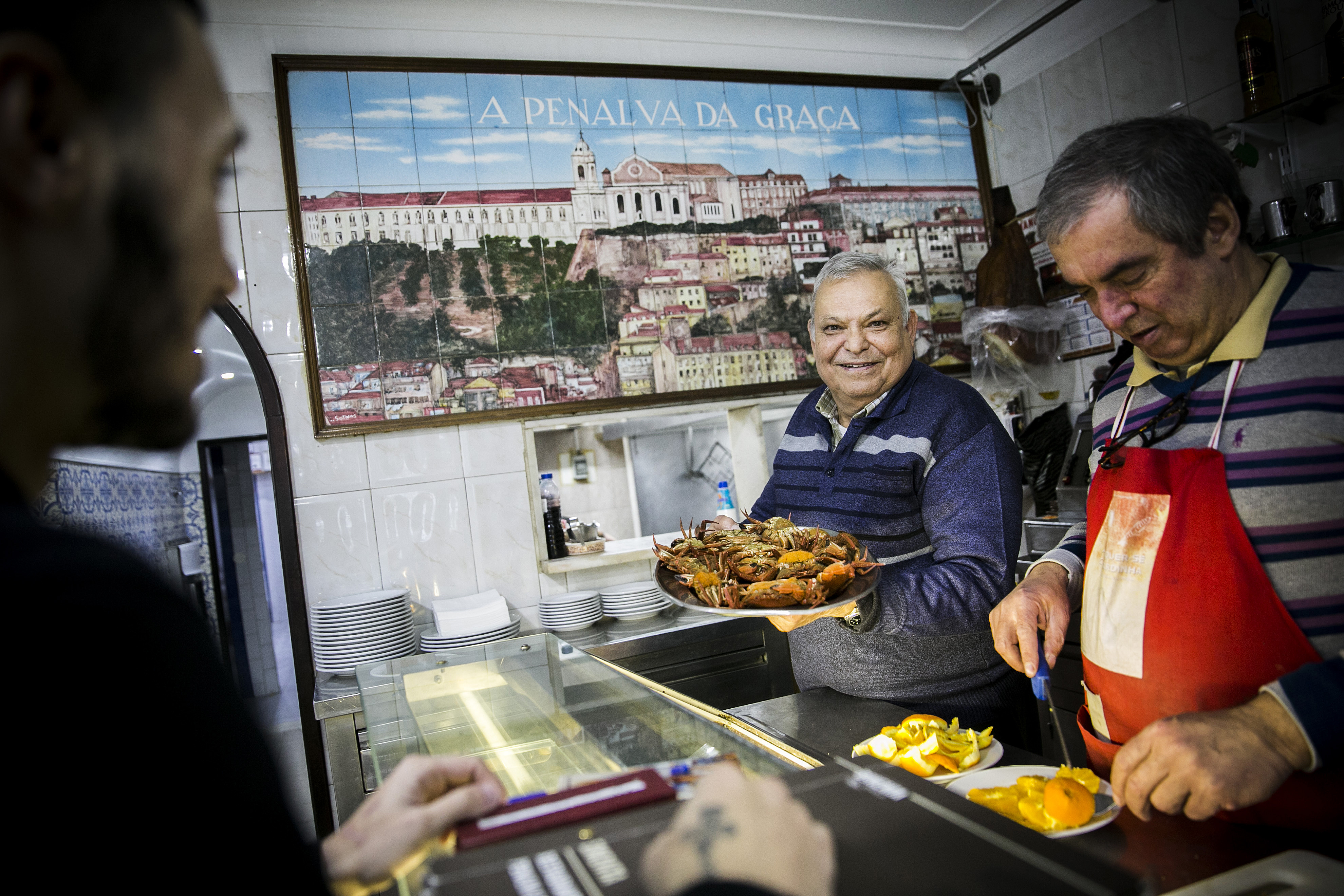 Lisbon | By Célia Pedroso
By Célia Pedroso
LisbonQuick Bite: On this afternoon walk through some of Lisbon’s most historic and scenic backstreets, we’ll explore the old and the new, ever delicious, in the kitchens of Graça and Mouraria. In Lisbon’s historic neighborhoods of Mouraria and Graça, where scenic little streets spread out, web-like, in the shadows of St. George Castle, the smell of…
A Taste of Home