We were strolling through the Dezerter’s Bazaar building when a little woman, about 5 feet tall, interrupted a pair of our German guests with “Sprechen Sie Deutsch?” Instantly charmed by her bright expression and linguistic dexterity, they stopped and chatted away in German. That’s how Tina Nugzarashvili became a must-stop on our Tbilisi market walk.

Tina occupies stall number 10 in a building that used to be the epicenter of Tbilisi’s main farmer’s market, two blocks from the central train station. The old structure, built in the 1960s, was an enormous space under a tin dome crammed with mountains of corn and wheat flour, wheels of cheese stacked a meter high, plastic buckets of spices, pyramids of corn-fed chickens, and piles of fruits and vegetables, some neon red, others green and orange.

One wall was dedicated to the butchers, burly men whacking slabs of meat with axes. Kiosks and table stands offered wine and chacha with gratis chasers of bread, fruit, tkemali, beans and whatnot. It was loud and crowded with people haggling over prices and space, and minstrel peddlers singing about hot bread, khachapuri, cigarettes and plastic bags. A southerly breeze would waft the smell of fish from near an entrance inside. It was all gutsy, lusty madness, and we loved it. 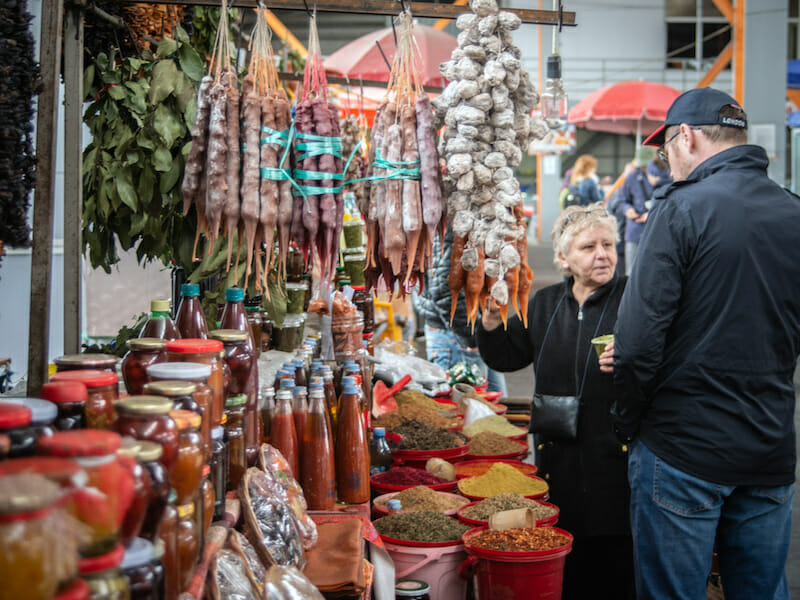 Then one day, around 2005, the city razed it. The government policy was to civilize the area around the train station, known as “Vagzal Bazaar,” which was basically a huge outdoor shopping mall where you could buy everything from counterfeit sport clothes from Turkey, new and second-hand cell phones and SIM cards, household goods and appliances, hardware – everything.

For the merchants of the Dezerter’s Bazaar, this meant displacement. They re-established themselves in nooks and crannies around the market place, inhabiting an old red brick building called the Central Bazaar. In 2012, when the new building was finally finished, few – if any – vendors returned to set up shop. The space now functions mostly as a wholesale warehouse of seasonal produce with stalls around its perimeter.

Tina arrived here six years ago. The 62-year-old had been a cardiologist for 35 years when the government purged many old-school administrators, bureaucrats and officials, including doctors. Back in the Soviet period, she traveled to Poland and Germany on work-related trips. Now, she takes a 40-minute metro ride from Varketili to open her stall every day at 7:00 a.m. She shutters it 12 hours later.

“Sometimes I have to take a day off to make churchkhela; it takes a long time. I don’t have time to relax. I can’t afford it,” Tina explains.

Tina claims she is the only person who makes much of her own products.

The Dezerter’s Bazaar is full of vendors selling the same things. Almost all of number 10’s neighbors have buckets of spices on display, along with repurposed bottles of tkemali and preserves and churchkhelas and dried fruits hanging from strings. However, Tina claims she is the only person who makes much of her own products. We recall how she used to make churchkhela and tkemali in her booth before the health ministry passed a law forbidding it. Nowadays, she does much of her cooking in a nearby garage, legally, after work.

“My mother had seven children and taught us all how to work. I learned how to cook from her,” Tina declares.

Tina always likes to ply us with her chacha, and although we are leery of bazaar moonshine, we have no complaints with hers, other than its strength. Her cherry-infused chacha isn’t so much for sipping as much as it is for jumpstarting your heart.

Her specialty, however, are her sauces. The satsebeli, a tomato-based sauce that accompanies kebabs and roasted meats, packs a bit of octane and is totally suitable as a salsa substitute in a bowl with corn chips on the side. Her bottled adjika is hot red pepper, garlic and spices. It is from a family recipe that hasn’t changed in generations. 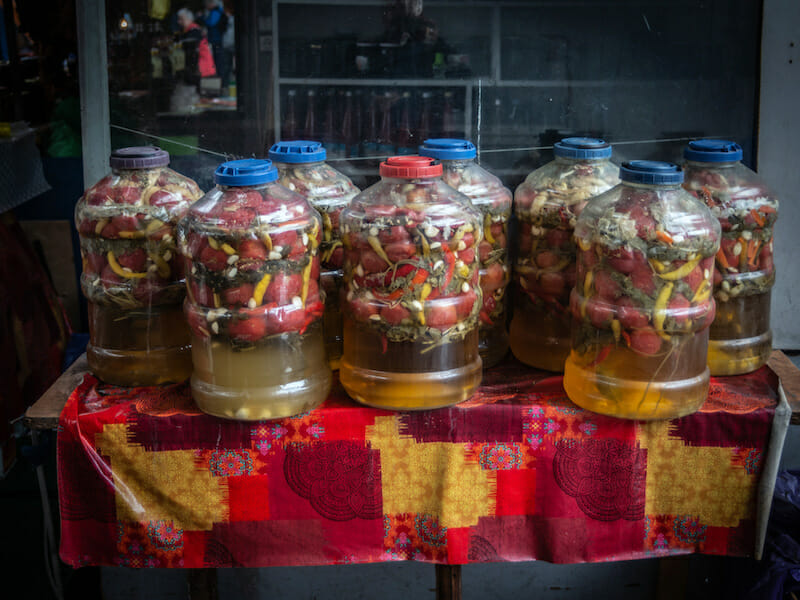 For Tina, spring means tkemali. The young green plums are just appearing in the market but they will be better in two weeks, once the pits are more developed.

“Baby pits get cooked into the sauce and make it bitter,” she claims.

Unlike the family adjika recipe, Tina has taken liberties with the tkemali, exclusively using the herb umbalo, or pennyroyal. “My mother didn’t always use it,” she says.

Back when Tina used to cook in her booth, we once stopped by hours after she just finished a huge pot of tkemali that had been simmering on a single-coil electric burner. With child-like glee, she grabbed us by the hands and escorted us behind the counter where she forced us to drink the cooling sauce by the cup. She watched us take it down with wide eyes and a confident grin.

We drank a flawless harmony of fervid tartness and earthy sweetness with an understated red pepper finish. It was fresh. It was provocative. It was Tina’s springtime tkemali. 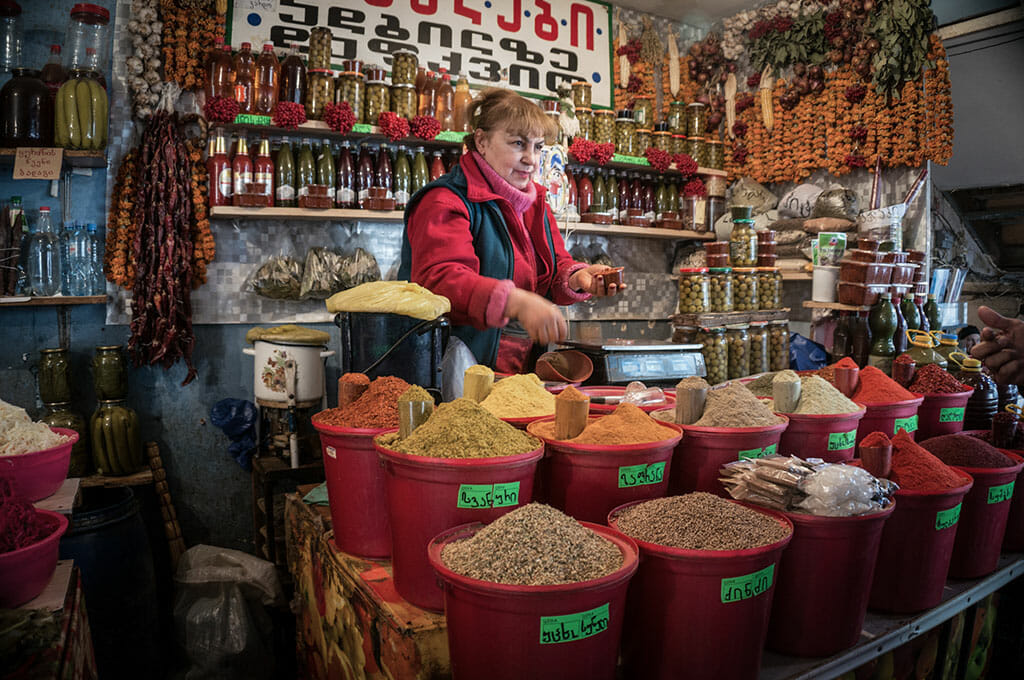 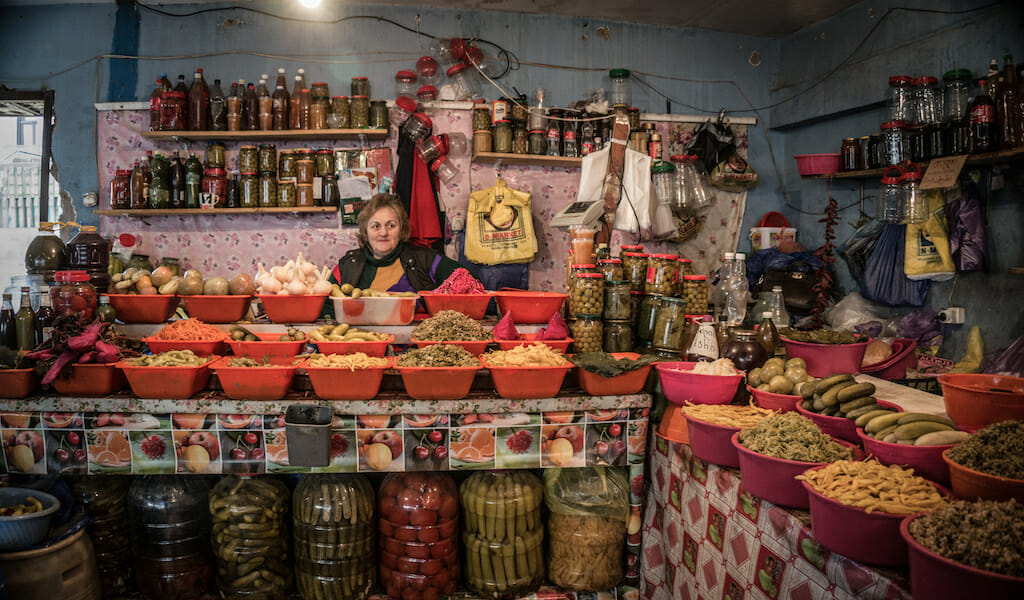 Tbilisi | By Paul Rimple
By Paul Rimple
TbilisiWe are so heartbroken to report the passing of Nunu Gachechiladze, fondly known as our “Pickle Queen” at Tbilisi’s Deserter’s Bazaar. We first met Nunu two years ago, while mapping out our market walk with Justyna Mielnikiewicz. In our decade and a half of life together in Georgia, Justyna, a Polish native and pickle expert…