“Ó freguesa hoje temos a bela sardinha!” From afar, the fishmonger calls me to see her “beautiful sardine.” It is indeed a thing of beauty, this fish that the Portuguese love, especially in the summer when they are at their best – fat and full of flavor.

Maria Alice has sardines, but also an incredible array of fresh fish from the waters south and north of Lisbon: cuttlefish, octopus, horse mackerel and mackerel as well as the prized ocean sea bass, sea bream and red snapper. Her friendly face is a reminder of how welcoming Mercado da Ribeira has been for generations of sellers and customers. Just as stalls are passed down from parents to children, so too is the habit of shopping there.

The market is the oldest in Lisbon still in operation and also the biggest, home to both retail and wholesale markets over the years. Its origins date back to 1771, but the actual building is from 1822; it was designed by the engineer Frederico Ressano Garcia, whose vision also shaped Avenida da Liberdade, the Campo de Ourique neighborhood and Avenida 24 de Julho along the riverfront. The market was partially destroyed by a fire in 1893, and in 1902, work began on enlarging the structure, to better serve the city. In 1930, as Lisbon began to be built up, the tower at the market’s main entrance was replaced by a dome with a clock above it. Lisboetas used to call it Mesquita do Nabo (“Turnip Mosque”) to define the new architectural feature. In 1980, the market’s slaughterhouse was closed, and in 2000, one the biggest changes occurred: The wholesale market moved from Ribeira to the north of Lisbon. Gone were the busy early mornings, and the business from nearby cafés and restaurants slowed down to a trickle.

However in 2014, the opening of the Time Out Market, a gourmet food hall, in the market’s central section brought some new visitors to the fresh produce side. It eventually became one of the most crowded tourist spots in the city, even if it drove locals away. Most vendors are eager to see their “neighbors” starting operating again, though they know it will take a while for tourists to return. 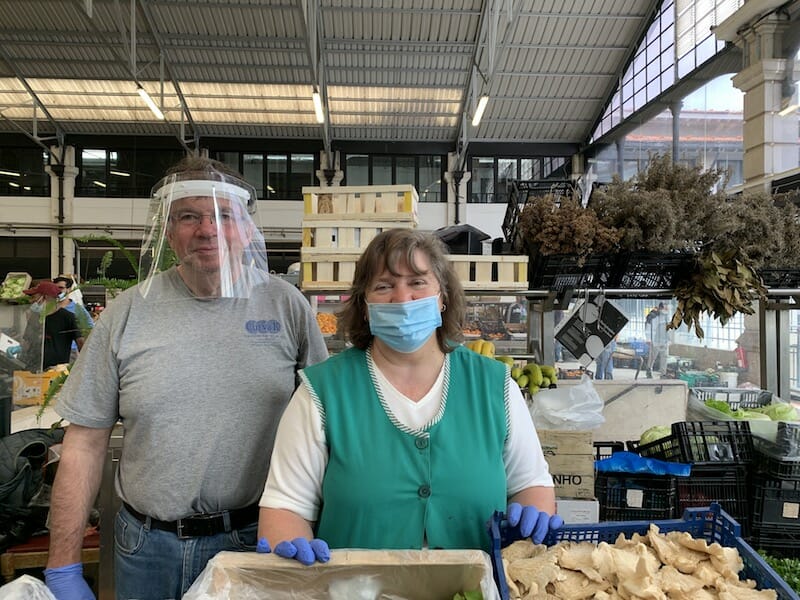 Like other markets in the city, Mercado da Ribeira never stopped working during the lockdown, as it was considered an essential supplier. The State of Emergency actually led to an influx of new customers, although they disappeared once the lockdown was lifted.

Moving from the back of the market to the front, I immediately spot Sr. Manuel and Sra. Margarida outside their little shop, which used to be a grocery shop but is currently dedicated solely to cheese and some charcuterie. The couple has been working at the market for 45 years, having inherited the business from Margarida’s grandfather. Serra (the soft sheep cheese from Serra da Estrela) is one of their bestsellers, but the goat and sheep cheese from Fundão, in the Beira Baixa province, is also popular. Today the shop is very quiet, and they’re hanging around outside to pass the time. “Our best customers, the restaurants, have stopped buying,” says Manuel. “You can see around the neighborhood – it’s so sad right now. Most places are still closed, and nobody lives here anymore. Other restaurants and tascas have closed for good.”

He’s right. Cais do Sodré, the area surrounding the market, has lost most of its local population due to gentrification – over the years it went from a seedy neighborhood to a tourism and nightlife hotspot. Increasing rents and noise in the early morning hours drove many inhabitants away.

Most vendors are eager to see their “neighbors” starting operating again, though they know it will take a while for tourists to return.

Back in the market, I make my way to the corner where Anabela and Carlos have been selling fresh fruit and vegetables for more than 20 years, some of which is grown on their own farm. They also have a wide variety of young trees, from olive to orange, for sale. Anabela’s mother started the tradition – at 15 years old, she began working at the market, staying until she was 65. They saw an uptick in business when the lockdown led many people to avoid crowded supermarkets, preferring instead to shop at the city’s airy municipal markets. But with the end of lockdown, most new customers went back to their old ways.

Not everyone has left, though. “We still have a few restaurants, but they buy much less because they are not as busy as before,” says Lurdes Neves, from her seafood and shellfish stall. “Luckily we have a few loyal customers, Portuguese and from other countries.” Business was slower during the lockdown and, as a result, they reduced their opening hours and stock. Now the top clams from Ria Formosa and the gooseneck barnacles from Peniche are back in the stainless steel stall. And I learn from Lurdes that her daughter Ermelinda is absent because she has gone out to deliver an order to a restaurant – another good sign.

Deliveries are also an important part of the iconic Rosanamar fish stall, helmed by Rosa Cunha, who has been selling fish for 38 years in Ribeira – she began working when she was 14, following her mother’s footsteps. One of her daughters now works with her, keeping up the family tradition. Her stall is decorated with photographs of famous Lisbon chefs visiting, including José Avillez, André Magalhães and Jesus Lee Fernandes. She supplies many restaurants, lured in by the high quality of her fish and the huge variety she sells. Her stall has the motto, “The sea gives, Rosa delivers.” 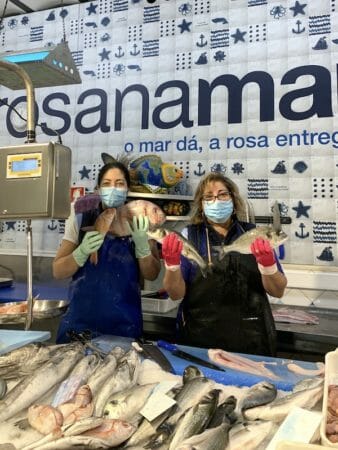 “We’re OK but very different from June of last year,” Rosa says. Like many others, she’s hoping that the Time Out side will reopen soon and inject some life back into the market. At the time of my visit, the food hall was in the process of being redesigned – it eventually reopened on July 1. Tables are now spaced apart in accordance with Covid-19 health and safety regulations; there are some screens; the venue closes early, at 11 p.m.; and the capacity is closely monitored. For the first time, it’s possible to book tables (with a maximum of eight people per table).

But on this day, it’s quite eerie to see the huge food court, where crowds used to wait in line for food and jostle to get a spot to sit down, so quiet. Despite displeasure with the former status quo at the Time Out Market – “it was not sustainable or friendly,” one seller tells me – both shoppers and sellers are now pinning their hopes on it reopening, albeit in a “civilized way without the crowds,” the seller adds.

On the same corridor as the fish sellers but on the opposite side are Carlos and Irene, whose normally bustling butcher shop is known for its pork and unusual cuts, from trotters to snouts. I stop for a chat with the couple, who have been working at Ribeira for 47 years now. They are bereft without their usual clientele, though some restaurants are still buying meat for bifanas (the classic pork sandwich) from the shop. All they can do is hope for better days ahead.

On my way out, I walk past the farm shop for the organic estate Herdade do Freixo do Meio. Set near Montemor-o-Novo, in beautiful Alentejo, it’s one of the oldest and most important organic farms in the country. The shop, which has developed a loyal clientele over the years, sells the farm’s excellent vegetables, meat, eggs and olive oil as well as their own traditional acorn bread. I bump into Estanislao Carenzo, an Argentinan chef living in Lisbon (his restaurants with chef José Avillez, Rei da China and Casa dos Prazeres, are sadly now closed), while he’s doing his personal food shopping. But overall the organic shop has fewer clients due to the pandemic, and most regulars only come in to get their CSA (Community Supported Agriculture) baskets.

Before exiting, I check if Manteigaria, the bakery specializing in pastéis de nata (custard tarts), is now open – sadly not yet. But I do notice, at the market’s entrance, the black-and-white photos of the hard-working varinas that used to come to this riverside area every day to buy their stock at the fish auction, which they would then sell across the city. These roving fishmongers may have disappeared from the urban landscape but the market is still here – hopefully for many years to come. 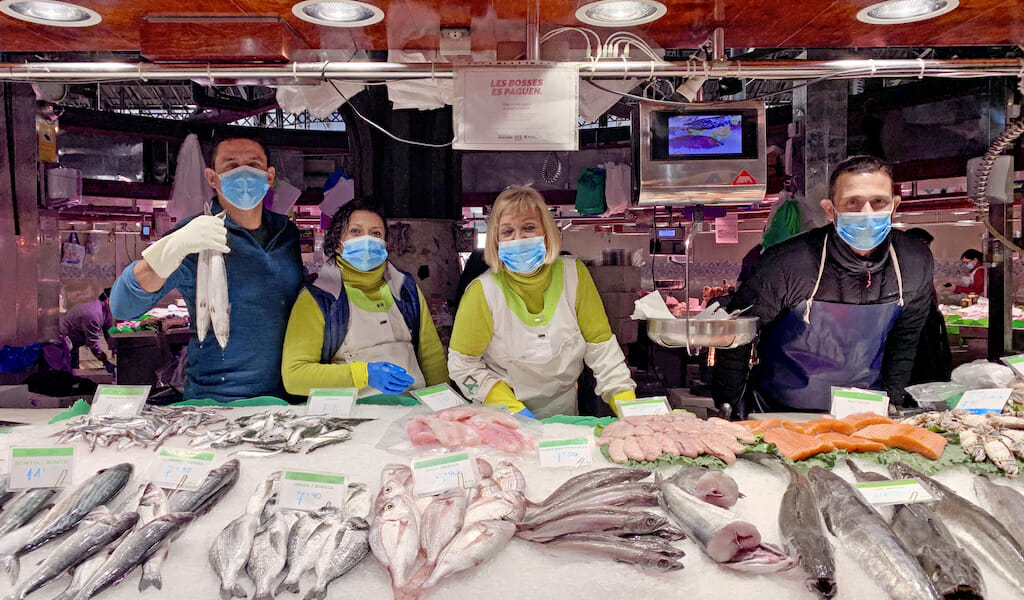 Barcelona | By Paula Mourenza
By Paula Mourenza
BarcelonaDo I have a fever? Am I coughing more than normal? My paranoia about potential coronavirus symptoms seems to be quite widespread, judging by my family and friends. After more than one week confined inside the walls of our homes in Spain, our moods have run the whole gamut from joking and laughing in chats…