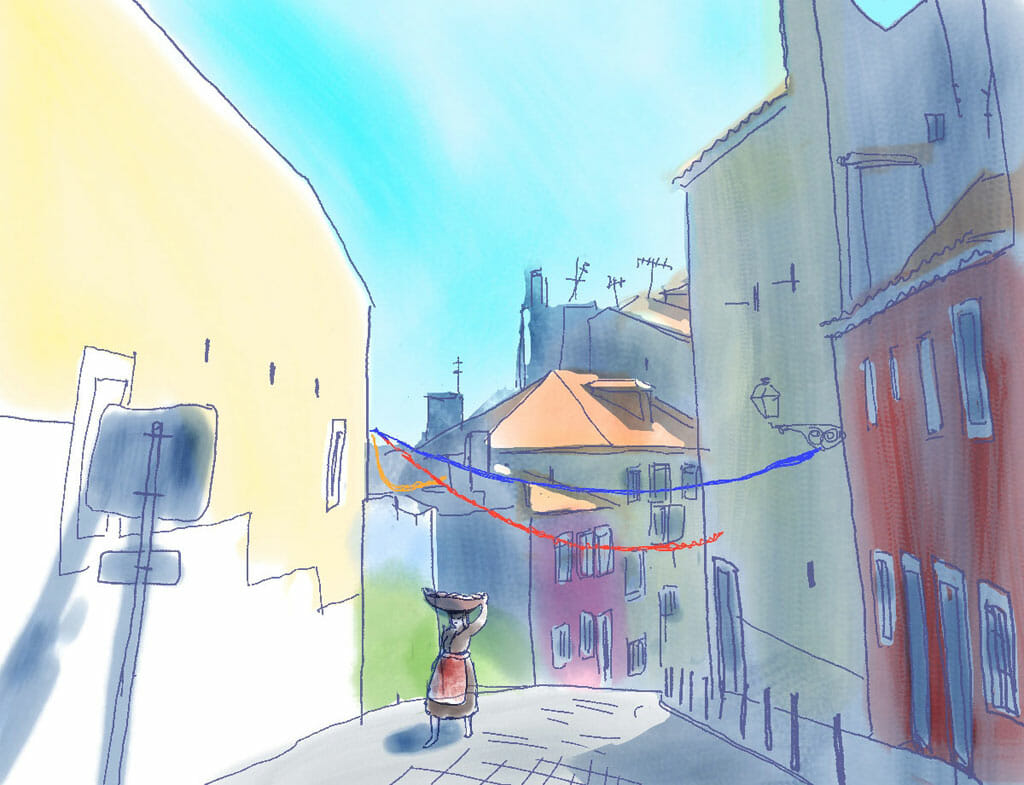 Varinas may no longer be prowling the streets of Lisbon, yet they remain iconic characters of the city. Until the 1980s, one would regularly hear these women loudly advertising the fresh fish they sold out of baskets they carried on their heads as they walked the hilly streets around the Lisbon.

“In the 18th and 19th centuries, there was what we call the ‘aveirense invasion.’ They were coming mostly from the Aveiro region in northern Portugal, particularly from Ovar,” explains Appio Sottomayor, a journalist, author and a renowned expert in Lisbon history. (This is why they were known as ovarinas and eventually, once the “o” was dropped, varinas.)

“Many fishermen would migrate to Lisbon during the winter when they had less work. Soon they called their women, who started to work in loading and selling fish, and settled in Madragoa, a central neighborhood, close to the fishing port and the Ribeira market in Cais do Sodré.”

Each day, early in the morning, the women would unload the fish that arrived at the Ribeira dock. Before going to the fish auction, these indomitable women had to walk a narrow gangplank from the boat to the pier to unload the fish or sometimes walk into the Tejo River and right up to the boats, often getting completely soaked. The hectic setting could be harsh but was also exuberant and full of life, celebrating as it did Lisbon’s love of fish.

These days, the roving fish sellers are no longer a regular feature of Lisbon life. With supermarkets supplying fresh fish, demand for door-to-door sales diminished, and the varinas could no longer make a living from just a basket of fish on their heads. Still, the surviving varinas remain an important part of the Madragoa neighborhood, serving as a living link to what is now a vanished past.

At 73 years of age, Deolinda Peres, one of the varinas that still live in Madragoa, has a serene face, but her broad shoulders speak of a lifetime of hard work, much of it dedicated to unloading fish in the port. 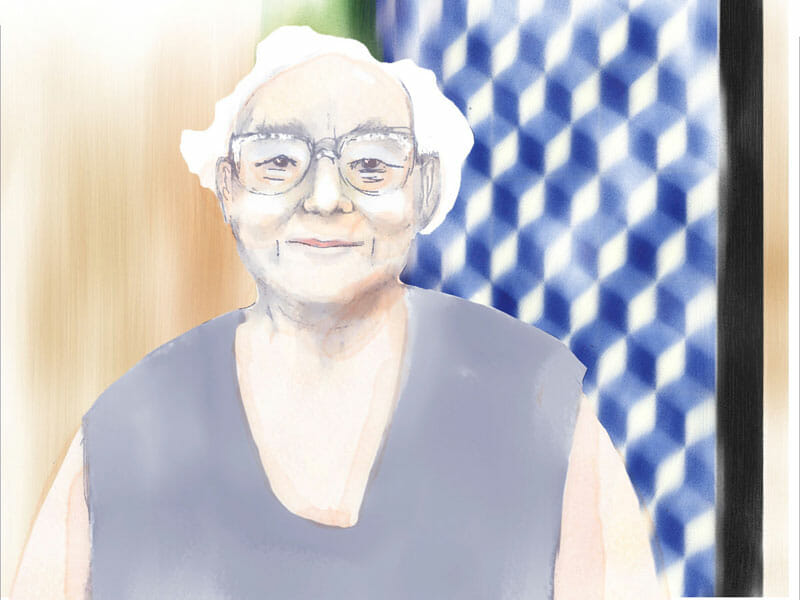 Peres started working in the fishing port when she was eight years old. Her parents were from northern Portugal, but she was born in Lisbon, not far from where she lives today.

“My mother didn’t send me to school, only my brothers, but she taught me a lot, including that I had to be independent.”

Madragoa is a quiet neighborhood – everyone still knows everyone – though gentrification and short-term rentals, which end up displacing locals, are on the rise. There was once a lot of fado vadio (amateur takes on fado, Portugal’s mournful national song form) in tabernas, and a street in Madragoa still disputes Mouraria’s claim as the birthplace of Severa (the first fado singer that became famous). Madragoa revives its maritime traditions during the June Santo António and São João festivals and parades, when grilled sardines and other fish return to its doorsteps.

Peres has two sons who still live in the neighborhood and five grandsons, but many local children call her avó (granny). Her smiling face changes when she speaks about her daughter, who died tragically at 37 after a lengthy illness.

Looking at the river below, Peres recalls times past. Her father had a canoe for shrimping, and her mother would supply water for the varinas to wash their fish in the river. Sometimes her dad would take her shrimping in the estuary of the Tejo. “There was a lot of shrimp in the river, great for rissóis,” a savory snack. “They were very fresh and full of flavor. We used to call them Moorish shrimp” – camarão mouro. “My father had restaurants that would regularly buy his shrimp for the rissóis, and I would deliver them.”

“When I started to work, it was always on the riverfront, unloading the fish, carrying them on my head or accepting the buckets thrown by the fishermen.” The work might also take her to the other side of the river. “I would go on the boats to Porto Brandão, Cacilhas and Trafaria to unload fish for the canneries, which have all closed now. I remember one factory in particularly that had one ramp that was really hard to climb, especially with 60 kilos of fish on my head.”

Back then, Ribeira was a vibrant port with fish coming mostly from the nearby sea, both north and south of Lisbon, and from nearby areas like Cascais and Caparica, which are today famous for their great beaches, but only a few decades ago were also known as fishing grounds for delicious (and cheap) octopus, cuttlefish, squid, mackerel and horse mackerel. Peres remembers the white stones on the Ribeira pier, the unpolluted, crystal-clear water, the dozens of fishing boats and shrimping boats lined up to unload their catch and the noisy crowds in the morning.

Peres would unload not only fish but also another element essential to the Portuguese: sea salt, brought from salt pans up and down the coast. She would carefully balance the heavy basket on her head as she walked up and down the gangplank. It was dangerous and a hard work. “We had to walk very fast on the board to avoid falling.” Some fell anyway.

The varinas worked in bare feet, as they had to be in and out of the water, sometimes up to their waists. By the middle of the 20th century though, they weren’t allowed to keep their feet bare any longer. The propagandists of the fascist regime that ruled Portugal at the time had turned the varinas into Lisbon folk symbols, but also decided that putting slippers on their bare feet made them seem more modern and civilized.

“When the police began to fine us I would go to the police station every day. How could I walk with slippers or shoes when I had to work with water up to my waist?”

Peres remembers one policeman in particular who was very strict and fined everyone. “He was called Manuel, but we would call him Sr. Ministro” – Mr. Minister – “because of this attitude. Once, I told him, ‘If you wish to take me to the station, then you’ll have to carry me, I’m not going.’” After that, he never bothered her again. “Sometimes I would have to walk to where the trucks were, and I could manage 10 boxes on my head, but only in bare feet.”

Peres remembers some of the varinas’ old tricks. “We used some ice [in the baskets] but couldn’t put a lot because it would melt, so we would use cabbage leaves to protect the fish from the sun.” There were some less-than-aboveboard tricks as well: “Sometimes we would inflate the [fish’s] bellies through a small hole made with a match. The hake would have a big fat belly and look like it had prized fish roe.”

Peres says she can’t stand eating fish now. Back then, there were grilled sardines for breakfast, boiled sardines with potatoes and onions for lunch and rice with sardines for dinner. Meat dishes were only for special or festive days.

Lisbon may have adopted the varinas as local icons, but in their day these women were not well accepted by society, with their coarse language, unbridled opinions and autonomy. “Lisboetas found these women strange,” says Sofia Tempero, a historian from Lisbon City Hall. (She produced a fascinating documentary about the varinas directed by Fernando Carrilho and broadcasted this year by the Portuguese public TV network.)

“They spent all day on the streets, practically lived on the streets, and the dress code was different, as well as the way they spoke. Also they had a financial independence that was quite unusual in Lisbon society.”

In 1980, when the fish port and the auction moved west, Ribeira changed dramatically. The varinas remained there for a couple of years selling sardines and horse mackerel caught in the waters near Lisbon (Peres herself worked in Ribeira until the last quarter of 1980). Some varinas hung on and kept selling in the streets of Lisbon, but soon supermarkets and fish shops replaced them. 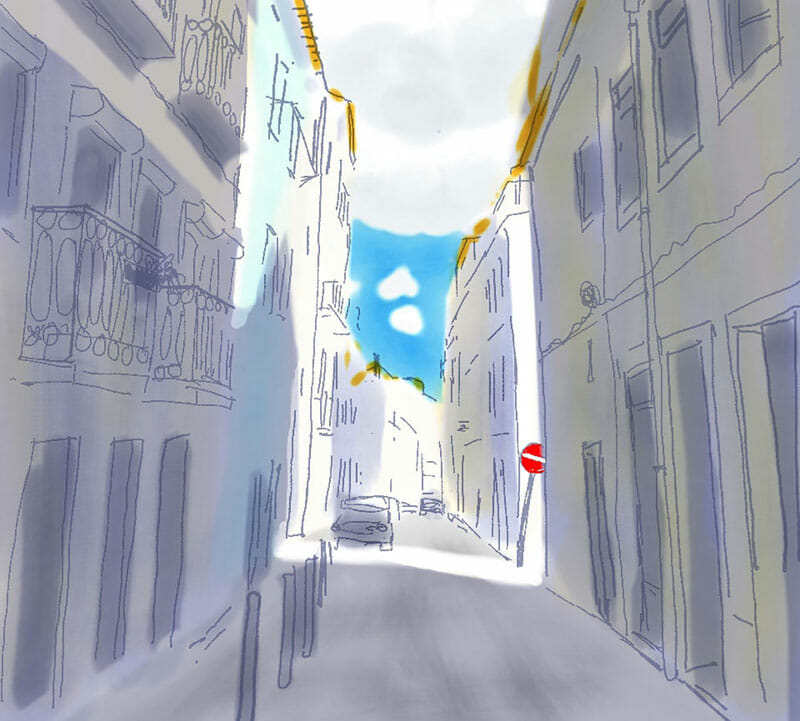 Ribeira today is quite different both on the riverfront and where the market still sits. The gleaming Time Out food court, which opened in 2014 next to the fresh fish and vegetable stalls, has two powerful black-and-white pictures of varinas at the entrance but without any caption, so most people miss the connection.

“I cried the last time I went there, says Peres. “I know every fishmonger and all the corners and stalls of that market.” 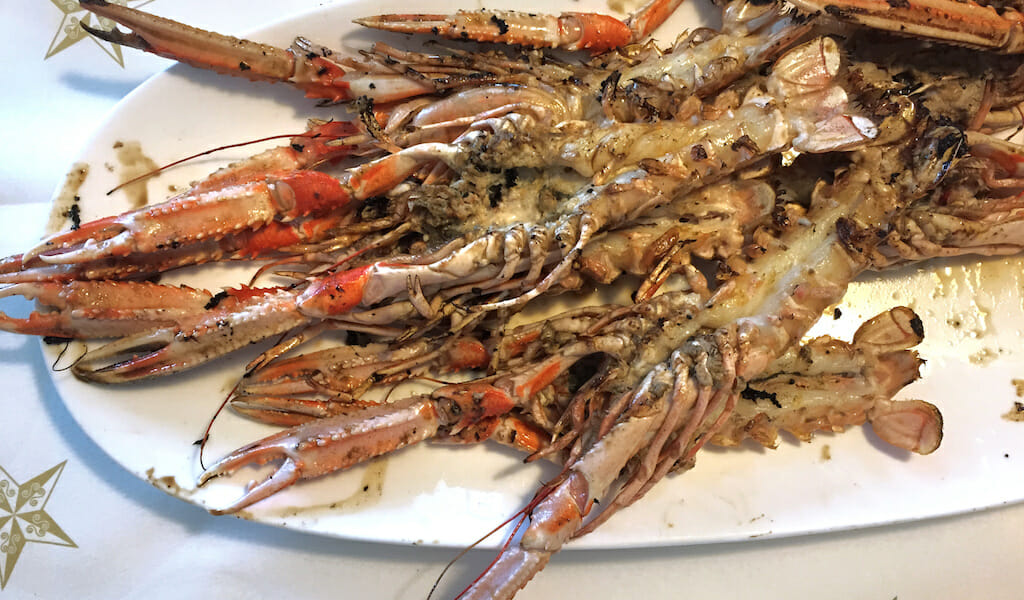 From Coast to Coast: A Galician Christmas Meal with Catalan Trimmings

Barcelona | By Paula Mourenza
By Paula Mourenza
BarcelonaLocated between the Atlantic Ocean and the Bay of Biscay, in the northwest corner of the Iberian Peninsula, Galicia is a large, wild cape that almost looks like a gigantic hand stretching out into the sea, hemmed in by the beautiful estuaries of the Rías Baixas to the south and the Rías Altas to the…