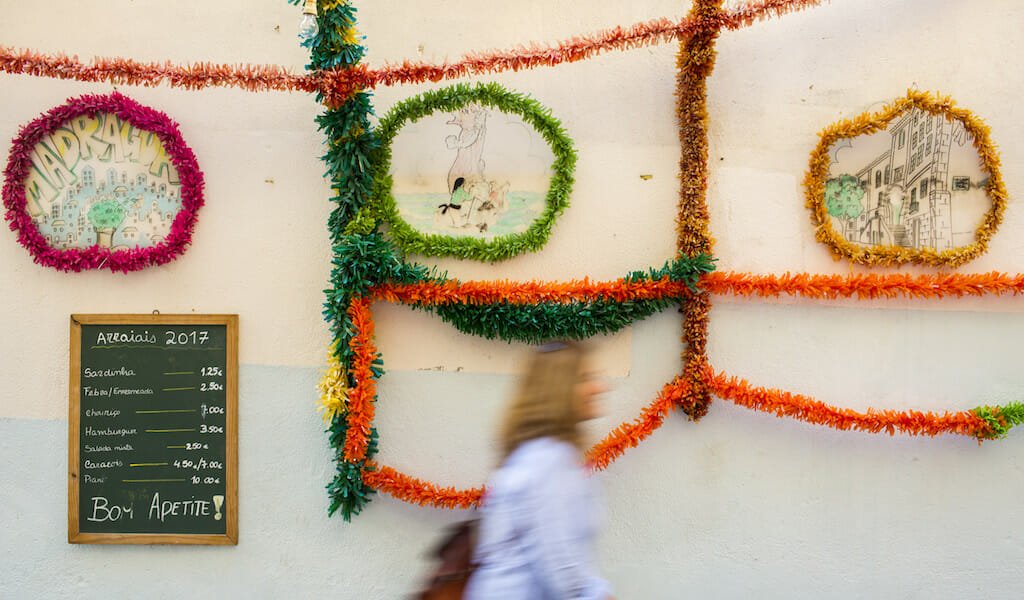 Over the course of June, Lisbon’s neighborhoods are perfumed with the smoke of barbecued sardines. It’s one of the most prominent features of the traditional arraiais, the festivals that pop in each neighborhood at this time of year, offering grilled fish and pork, beer and sangria, and music.

While all this eating, drinking and making merry is certainly a lot of fun, it’s by no means the main event. For many Lisboetas the highlight of the June festivals, which are held in honor of Santo António, Lisbon’s favorite local saint, are the marchas (parades) on the night of June 12, the eve of Saint Anthony’s Day. It’s the moment they have been waiting and preparing for all year – both the many people who will parade under the spotlights on Avenida da Liberdade, one of the city’s main thoroughfares, and the dozens of people backstage who have worked hard to perfect the costumes, music and choreography. 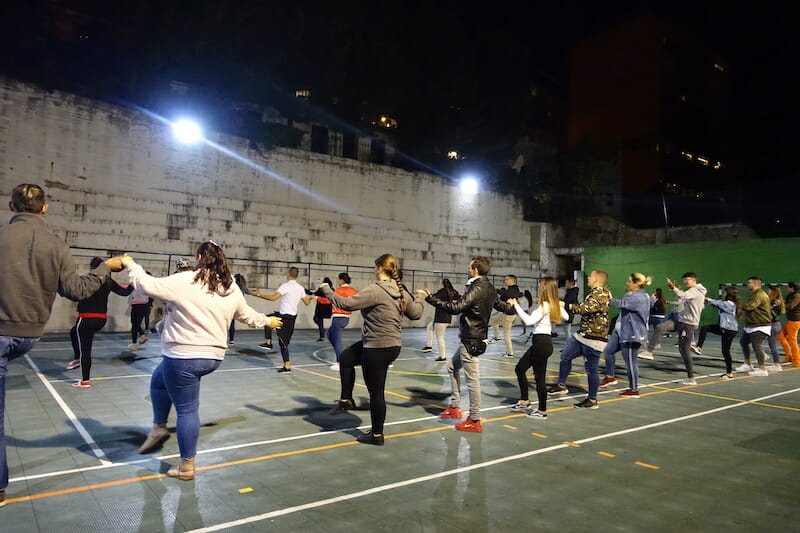 Each neighborhood has its own song, costumes and choreography, and the competition is fierce, with many long-standing rivalries between districts; it’s not uncommon at this time of year to overhear passionate debates over whether Alfama will win again.

The marchas tradition as we know it today dates back to the early 20th century, but records show something similar took place as far back as the 18th century, when small groups would parade holding torches. They were then called marchas ao filambó, an adaptation of the French marches au flambeaux.

These traditions were rediscovered and repackaged in 1933, as part of the big festive plan woven by filmmaker and newspaper editor-in-chief Leitão de Barros to revive Parque Mayer, a Broadway-like cluster of theaters in central Lisbon. Campo de Ourique won the first edition of the event, and in the following year the parade became monumental in size, snaking from the riverfront square of Praça do Comércio to the north of the city.

There was (understandably) a break in the celebrations during the Second World War. And they weren’t held for some years after the Carnation Revolution of 1974, which restored democracy in Portugal, due to the fact that many associated them with the toppled authoritarian regime of Estado Novo. But they made a comeback in 1980, and have continued to grow in popularity since then. 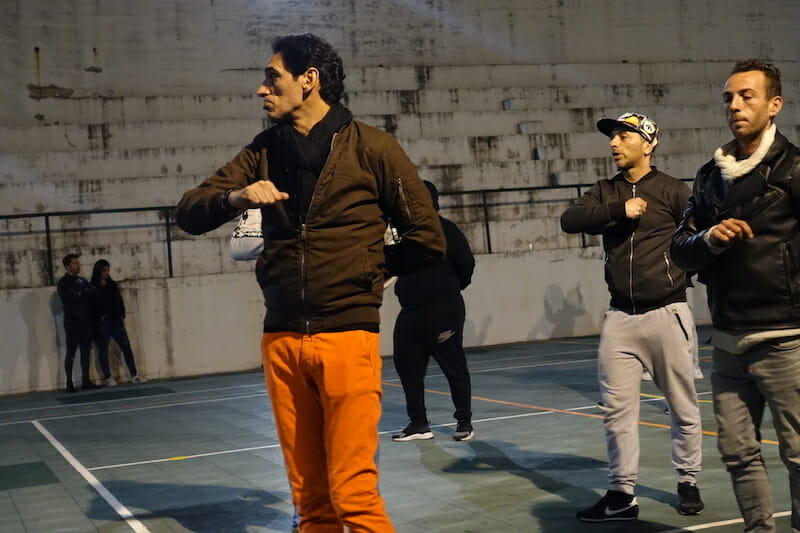 One of the most traditional neighborhoods participating in the marchas is Mouraria, the homeland of fado. Twenty-four people marched for Mouraria last year, but in total around 70 took part in the project. On a Friday night at Grupo Desportivo da Mouraria, a neighborhood association housed in a beautiful tiled palace that predates the 1755 earthquake, we went to witness the final preparations. GDM has organized the neighborhood marcha since 1936. Even though competition is fierce and the neighborhood has won twice, winning here is not the point.

Cátia Nunes, who has taken part in the parade since 2009, told us, “You cannot explain this [event], you have to feel it. I have goose bumps already just talking about it.”

Beside her were Raquel Lima and Cátia Mendes, who have participated in the marchas since 2005 and 2007, respectively. They were waiting to start the rehearsal ahead of the competition on Santo António eve. “Even if I had nothing but paper bags to wear I would still go, there is no better marcha than this,” said Cátia Mendes.

The football field was filled up with marchantes. In the kitchen, there were some minis (small beers) and coffee, and those who didn’t have time for a proper dinner chowed down on bifanas (pork sandwiches) and cheese toasts.

“She’s sleeping with the enemy, her husband is parading for Alfama.”

Raquel agreed there is a rivalry with other neighborhoods, especially Alfama. But Cátia Mendes added, “She’s sleeping with the enemy, her husband is parading for Alfama.” The three friends laughed out loud. The mood was festive and emotions high.

The bairrismo, a passionate protection and love for the bairro or the neighborhood, is strong here. “In the Avenida or in the Pavillion [the venue where the marchas are presented to the public two weeks before June 12] there is no such thing as unity – we are competing for our neighborhood,” said Cátia Nunes, whose four-year-old child was one of Mouraria’s two mascots.

The marchantes began rehearsals for the June 2018 celebrations in March 2017, meeting four days a week, at night, usually after a full day of work. “You have to really love this. And many of us cannot afford to live here anymore and are living in Margem Sul [South Bank] but still want to take part in this,” said Raquel. The cavalinho, the small band that accompanies the parade, was ready. The marchantes took their places on the football field without fanfare, and the band began playing at the director’s signal.

On the opposite hill, in Madragoa, we saw smoke from the sardine grills over Rua da Esperança but it’s also streaming up from the smaller streets. The neighborhood has a “Queen of the Parades” trophy from when they won the parade competition three times in the 1960s. The cup was well fought, and Madragoa has been trying to get back in the spotlight again. 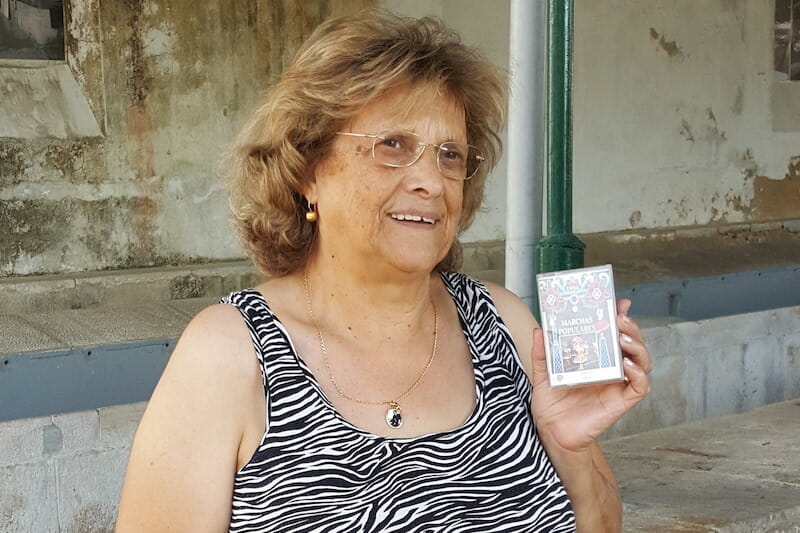 Fernanda Maria, now 79, remembers well the neighborhood’s huge success and the rehearsals that went all night long: “I was marching for more than 30 years. There always a great rivalry, and one year, knowing that we were parading barefoot, a tradition that comes from the fishermen and fishwives living here and working without shoes, they threw tacks on the ground. But I kept dancing.” Her kids joined the marchas with her and later became marchantes.

Three generations in the same parade is not unheard of. “My grandfather used to play in the cavalinho for Castelo, my mother was in the parade, and so was I. My daughter Liliana started to march too, and this year she’s going to do it while pregnant,” said Teresa Torres, who is proudly from Castelo neighborhood even though she grills sardines in Madragoa.

In “Noite de Santo António,” a song sung by the late Portuguese fado singer Amália, there’s a line that goes, “Enquanto houver Santo António, Lisboa não morre mais.” In English it means, “As long as there is Santo António, Lisbon will never die.” The city may be changing at a fast clip, but the annual parades are evidence that the spirit of Santo António (and thus Lisbon itself) lives on.

This article was originally published on June 11, 2018.

By
Célia Pedroso
, photos by
Ansel Mullins and Rodrigo Cabrita and Bob Karr