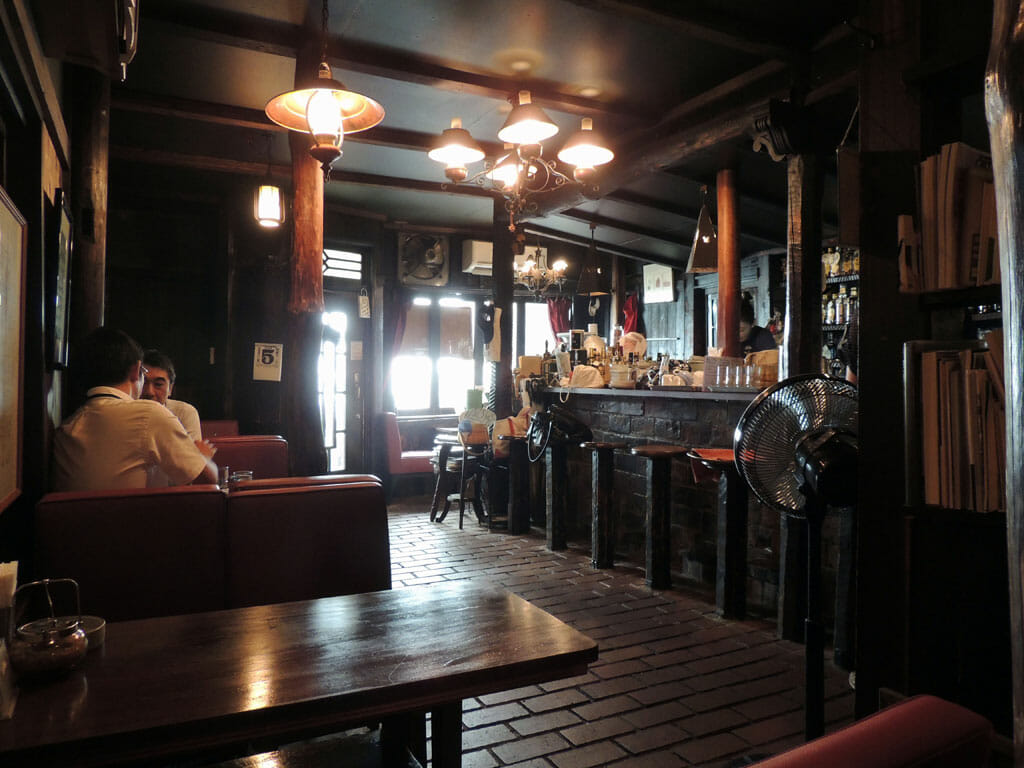 Our eyes take a moment to adjust to the dim light upon walking into Ladrio. The room is like a vault, its brick walls and floor emitting a scent familiar to anyone who’s ever been in a cave or stone cellar. This mustiness is comforting, however, and the cool air a welcome reprieve from the furnace of the Tokyo summer outside.

Soon we can make out several low tables extending back into the narrow space. People sit alone or in pairs sipping coffee or puffing cigarettes. Some converse in hushed tones as Edith Piaf is piped quietly from an unseen stereo. A few heads swivel in our direction but gazes never linger here. Ladrio is a kissaten – a no frills coffee house – and there’s an unspoken rule in Tokyo’s old-school ones that customers observe a certain level of decorum.

While coffee found its way to Japan via Dutch traders as early as the 17th century, the first coffee house didn’t open in Japan until 1888. It was modeled after European salons, intended as a place for people to gather and exchange ideas. Over time, more and more coffee houses opened. While some embraced the lively and social salon model, others aimed to provide peace and quiet for students and workers. Such kissaten, or kissa for short, flourished in post-war Japan as the country rebuilt itself brick by brick. While many customers nowadays favor more contemporary cafes, many stalwart, classic kissa remain by virtue of their unique and cozy atmospheres. 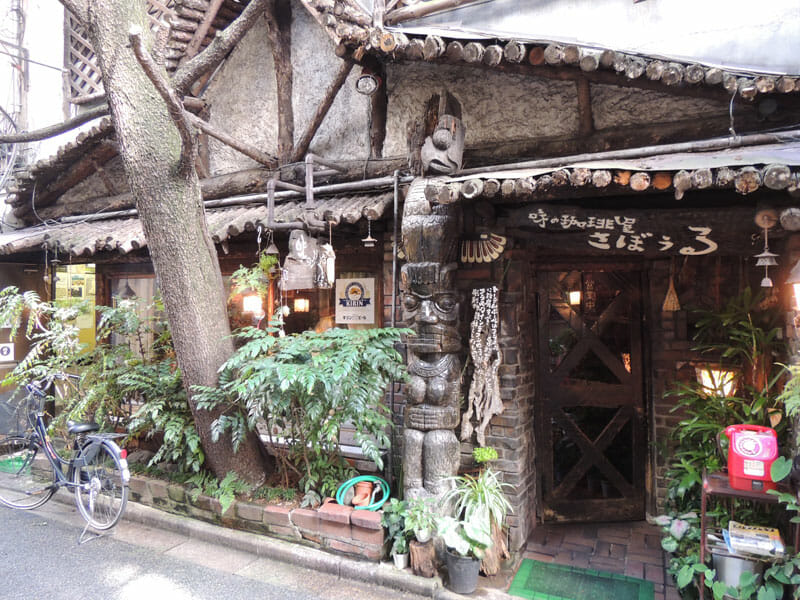 Since 1949, Ladrio has offered a quiet refuge from the hustle and bustle of Tokyo and has a long-standing reputation as a literary hangout. This distinction is fitting given its location. Ladrio is tucked away along a narrow alley in Jimbocho, a neighborhood famed for its dozens of secondhand bookshops that spill out onto the pavement.

An aproned server directs us quietly to a table in a tiny alcove along the wall, and we have a seat. The lunch menu at Ladrio is minimalist: chicken curry and Neapolitan spaghetti are the only options, both as simple and comforting as Ladrio itself. We opt instead for a cake and coffee set, and a few minutes later our taciturn server glides over with a sliver of lemon cake dolloped in whipped cream and iced coffee in an elegant fluted glass. The few conversationalists soon depart, and the occasional clink of cup against saucer is the only reminder we’re not alone. Most of the other customers read books or scribble in notepads. Not a single person is staring at his or her cell phone, as such behavior violates that unspoken kissa decorum we mentioned.

Not all kissa are so classic, however. Just up the alley from Ladrio sits Saboru, which has been serving up coffee, homemade sodas, and an extensive list of desserts since 1955. Though its history is almost as long and certainly as distinguished as nearby Ladrio, Saboru appeals to a much younger set and has an altogether different vibe. When we last visited one sunny afternoon, the place was buzzing with conversation. Students and trendsetters exchanged bon mots between sips of coffee and drags from cigarettes. A smiling staff member intercepted us at the door, and after a moment of looking around the crowded kissa directed us to sit “down below.” Saboru squeezes two levels out of a one-story room, but the cramped quarters are full of retro charm. Each level is hardly high enough to stand in and bedecked with Lilliputian furniture and statuettes of Tiki gods. Since the good old days, customers have been invited to write messages on the exposed brick walls, and so we perused decades of graffiti while awaiting our coffee. We may have eavesdropped on a conversation or two as well. 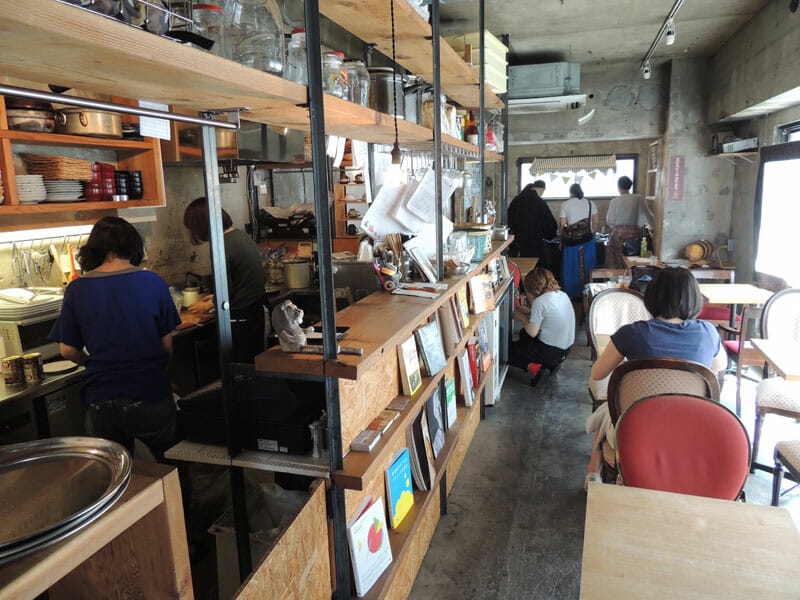 Without decades to cultivate their individual character, many newer establishments embrace a more modern aesthetic. Across town in well-heeled Mejiro, Abukuri has the quiet and cozy feel of a traditional kissa without the dim light and haze of cigarette smoke. It specializes in simple sandwiches, many of which are updates on kissa standards like egg or tuna salad, but served in a bright and smoke-free space. On our last visit, we ordered a roast pork sandwich with stone-ground mustard, apples and tangy balsamic onions. This was served with a salad of fresh greens topped with smoked prosciutto, black olives and crispy fried shallot. The meals at Abukuri are light, so we finished with a small hunk of lemon pound cake that was dense and sweetly sour with bits of candied lemon rind baked in. Abukuri still offers a quiet respite from city life, but its large windows and bare walls brighten the modern design. In addition, the small, open space in back is used to feature jewelry and similar small crafts from local artisans.

Ladrio, Saboru and Abukuri may span a coffee house spectrum that goes from classic kissaten to contemporary cafe, but each has its own appeal. Like anything well worn, a good kissa should match your mood.

Editor’s note: As we head into summer in Tokyo, we thought it was worthwhile to rerun this story on the city’s coffee houses, which was originally published on September 19, 2016.

Tokyo | By Davey Young
By Davey Young
TokyoOur eyes take a moment to adjust to the dim light upon walking into Ladrio. The room is like a vault, its brick walls and floor emitting a scent familiar to anyone who’s ever been in a cave or stone cellar. This mustiness is comforting, however, and the cool air a welcome reprieve from the…