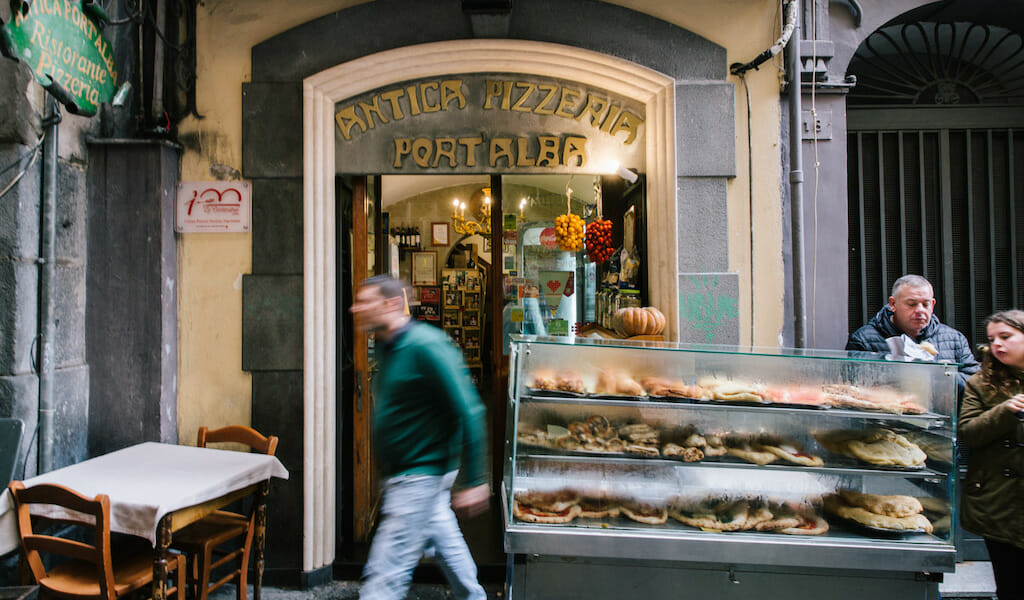 My Brilliant (and Delicious) City: The Culinary Side of Ferrante’s Naples

Elena Ferrante’s much-loved novel My Brilliant Friend and its sequels seduced the literary world. And now a new television adaption, which recently debuted on HBO, is bringing this coming-of-age story set in Naples to an even broader audience.

Over the course of what many call the Neapolitan novels, the two main characters, friends Lila and Elena, traverse the city. We decided to follow in their (fictional) footsteps, albeit with a focus on all things food.

The starting point of our journey is Porta Capuana, the ancient city’s largest gate, which dates back to the late 1400s. From here it’s a short walk to Mercato Sant’Antonio Abate, the most colorful food market in the city, and the used clothing market of the Ponte di Casanova, an area that regularly turns up in Ferrante’s novels. 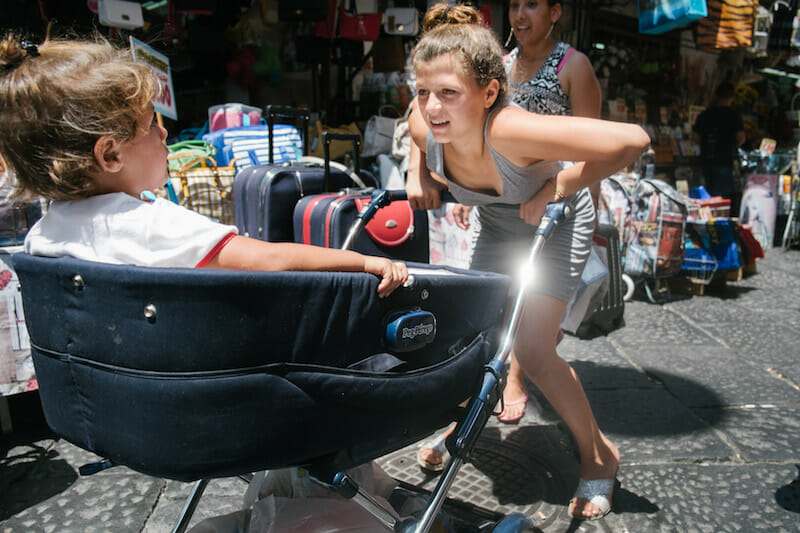 In many respects, not much has changed about the two markets since the 1950s and 60s, which is when the stories are set; the atmosphere, the people, the sellers’ screams are still today as they were then. In between the two markets, on the corner of Via Ponte di Casanova and Corso Garibaldi, is where Antonio, Elena’s boyfriend, would wait for her to go back to the rione (neighborhood) together.

After the markets whet our appetite, we begin the food portion of our day with the classic Neapolitan breakfast: sfogliatella, a shell-shaped pastry with a variety of fillings, and coffee at Pasticceria Sorella, right in the center of Piazza San Francesco, which is steps away from Porta Capuana. Here the sfogliatelle are kept warm in the oven; but before they can open the door and pass along our pastry, we have a decision to make: the sfogliatella riccia, the classic version that looks like a lobster tail, or the sfogliatella frolla, a shortcrust pastry without the characteristic layers? We solve this problem by trying both. 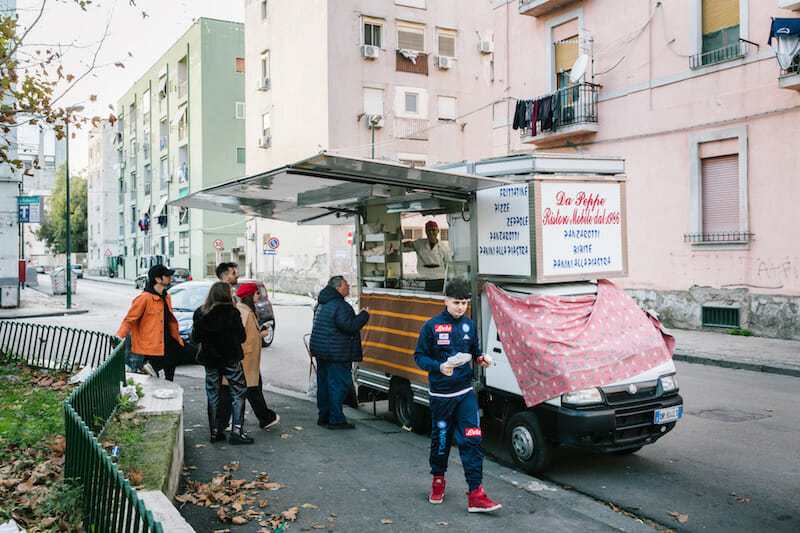 After finishing our breakfast, we could catch a taxi in Piazza San Francesco and head to Rione Luzzatti, the secluded working-class neighborhood where Lila and Elena grew up and an important backdrop in the books. But instead we decide on the more scenic route: walking to the central train station and taking the underground – Line 2 – to the eastern district. (If we had taken a taxi, we would have made sure to inquire first about the price, which should be 15 euros at most.)

Heading towards the train station, we make a stop at the Vasto street market, just north of the terminal, where we can still breathe the atmosphere of Ferrante’s novels – wandering amidst the stalls stacked high with everything from fruit to underwear, we can easily imagine Lila and Elena’s mothers combing through the piles in search of clothes for the two young women.

The metro ride is short. Getting off at the Gianturco stop, we make our way to the neighborhood through the tunnel “that led to the sea” – the dark underpass (today covered in graffiti) where Lila and Elena face their first adventure together. From the tunnel we reach the stradone, the big road (now Via Emanuele Gianturco) that is the only way into and out of the district.

We make our way to Piazza Francesco Coppola – the two girls played in the gardens here. The square is also home to the public library where the two spent many hours together as teenagers. From here the “road leading to the school,” where all their adventures with school friends took place, branches off through small gardens.

Via Vesuvio begins at the center of the square – we always imagined that the girls lived in one of the four-storey white buildings on this street, and that the Cerullo family’s shoe workshop was located here, too. 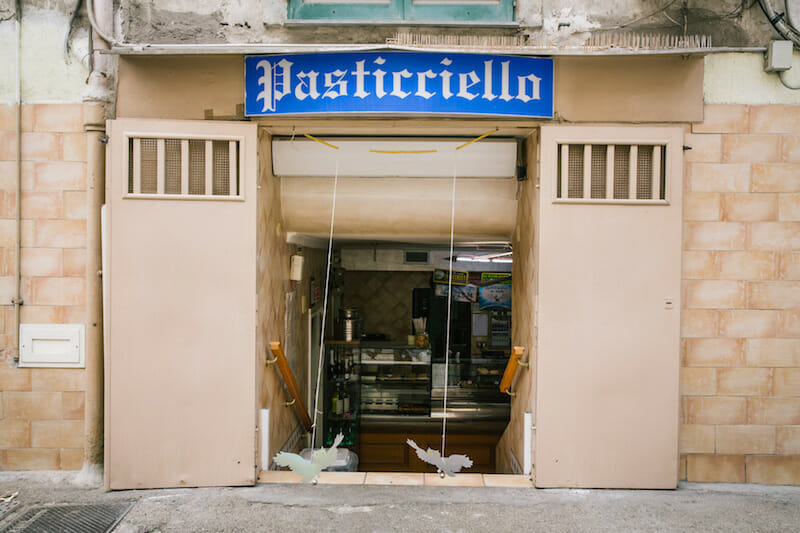 We make sure to stop at Pasticciello, an exceptional pastry shop on this street run by the sisters Lucia and Anita Taglialatela. It may not be aesthetically pleasing, but no matter: Pasticciello is all about substance over frills. The two sisters are continuing a family trade – their father, Antonio, is a third-generation pastry chef, and Lucia and Anita clearly have a passion for their chosen career. They’re famous for their pagnottiello, an extraordinarily good Neapolitan rustic pie filled with salami and boiled eggs.

To wash down the pagnottiello, we head to the wine shop in Piazza Coppola for a glass of good vino. There’s nothing particularly special about the spot, but it still has a certain appeal: the local families to whom it caters certainly seem to enjoy it.

In fact, Rione Luzzatti itself is not the most attractive place in Naples. Built after the Second World War, the neighborhood is made up of anonymous white buildings and doesn’t have much in the way of shops and restaurants. Before Ferrante’s books, hardly anyone made the trek out here.

But for some reason, we still love the area. Perhaps it’s because the Neapolitan novels caught our imagination – so much so that we’re almost tempted to approach the elderly locals chatting in the gardens opposite the wine shop to ask if they ever had a childhood friend named Elena.

We don’t, though, deciding instead to let ourselves get lost in reliving these enchanting stories. Near the square is the road (today Via Marino Freccia) that leads to the church where the teacher Oliviero lived; behind the church were the uncultivated lands and ponds where Elena and Antonio had their first sexual encounter.

After meandering through the scenes of the girls’ adolescence, like the parish church and the public gardens, it’s time to go back to the center, to the places of the sprawling city where Lila and Elena lived their young adult lives after outgrowing their neighborhood.

We go back through the tunnel and take Line 2 to Piazza Cavour. Walking down Via Costantinopoli, we reach Port’Alba, an area full of shops selling schoolbooks – this is where Elena bought her books and spent hours in the stalls. We follow her example and explore the used books of Port’Alba, which works up an appetite. So we get a pizza a portafoglio (folding pizza) at Antica Pizzeria Port’Alba, the oldest pizzeria in the city; it has stood in the same spot since opening in 1738. 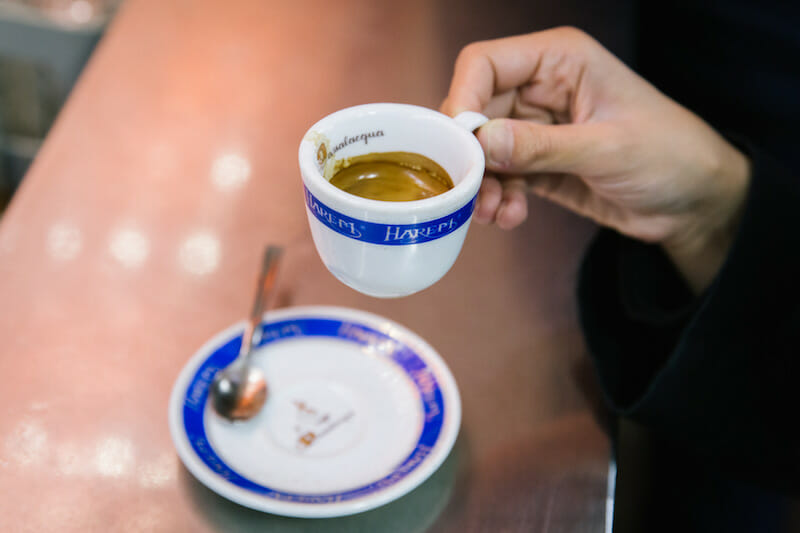 From Port’Alba, we make a beeline for Bar Mexico in Piazza Dante to taste the best coffee in the city. We take care, though, as the cup is hot and the coffee is already sweetened.

Following Via Toledo on foot, we reach Via Chiaia, another important spot in the novels: this is where young people from Rione Luzzatti used to come for Sunday strolls. But since the Chiaia area was home to wealthy families, the class differences between the youth from Rione Luzzati and their rich counterparts from the center often generated conflicts that resulted in violent scuffles.

On the same road is Cafè Gambrinus, where we pop in for a babà and to admire the beautiful neoclassical rooms that used to attract Neapolitan intellectuals. The two “brilliant” friends also frequented this spot as adults. 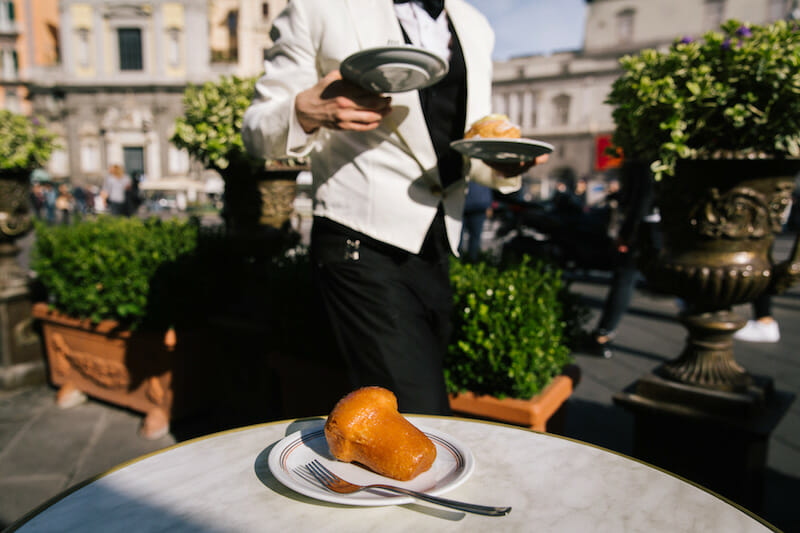 Via Chiaia eventually leads to Piazza dei Martiri, the showroom of the city, where the Solara brothers opened their shoe store, selling Lila’s designs. Today, Salvatore Ferragamo’s shoes (and his scarves) occupy the center of the commercial area in Piazza dei Martiri, while the large Feltrinelli bookshop, the largest in southern Italy, is one of the cornerstones of the city’s culture.

Feltrinelli did not exist during Elena Ferrante’s youth, but today the bookshop is supported – almost literally – by the Neapolitan writer’s novels. Picking up a new title, we head to the Gran Caffè La Caffettiera in Piazza dei Martiri for a tea and the chance to start our new book surrounded by an elegant Art Nouveau ambience.

We can only hope it’s as bewitching as Ferrante’s books; but one thing we know for certain is that it’s unlikely to capture Napoli’s soul as beautifully as she did. 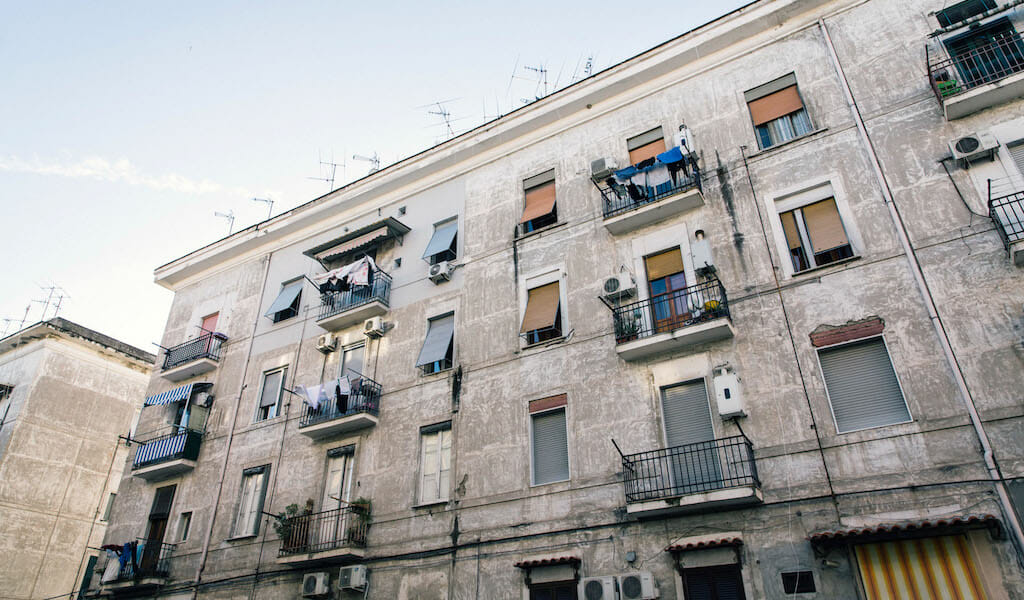 Naples | By Amedeo Colella
By Amedeo Colella
NaplesRione Luzzatti is an ugly neighborhood. That’s not particularly surprising to anyone who has read My Brilliant Friend, the first of Elena Ferrante’s Neapolitan novels (or watched the television adaptation) – the two main characters, friends Lila and Elena, grew up in this neglected and working-class area. Built following a simple design after the Second…