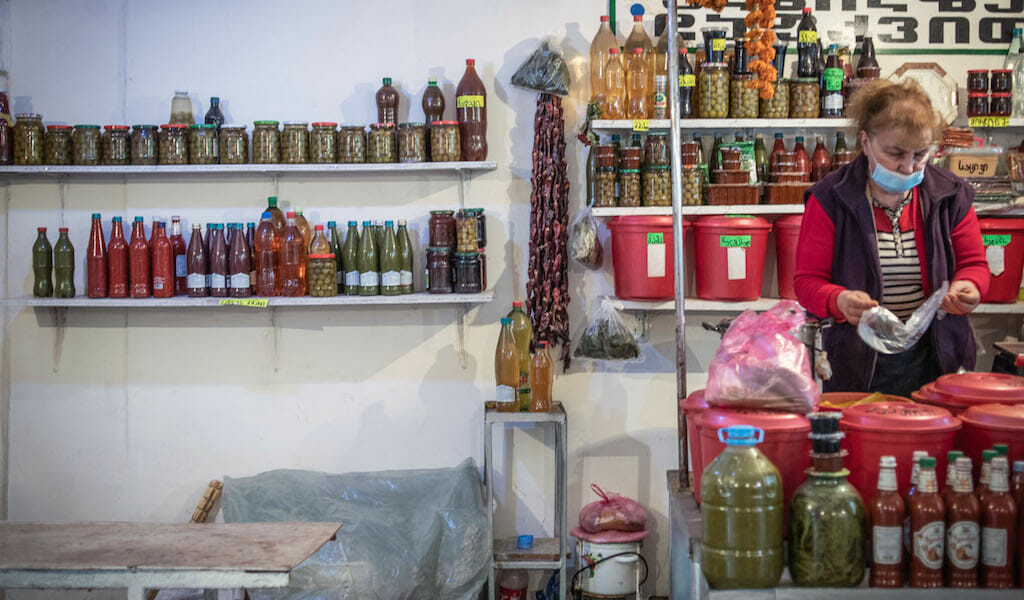 We used to live across the street from Dinamo Stadium, on the edge of the Deserter’s Bazaar and part of the Vagzalis Bazroba – Station Bazaar – complex, a sprawling, unhinged confederacy of free-marketers selling everything from counterfeit apparel to contraband from Russia, secondhand cell phones and coffee beans labeled Nescafé.

Zaza, a musician and our roommate at the time, served as our guide. His song “Vashlis Gamyidvelo,” about an apple seller who sold him a beautiful but rotten apple, was a big hit on the radio and made him quite the local celebrity. Shopping with Zaza at the bazaar meant lots of discounts and free drinks at the many wine stands back then. We never had to worry about pickpockets, although some apple vendors failed to understand his metaphor. We got no deals from them. 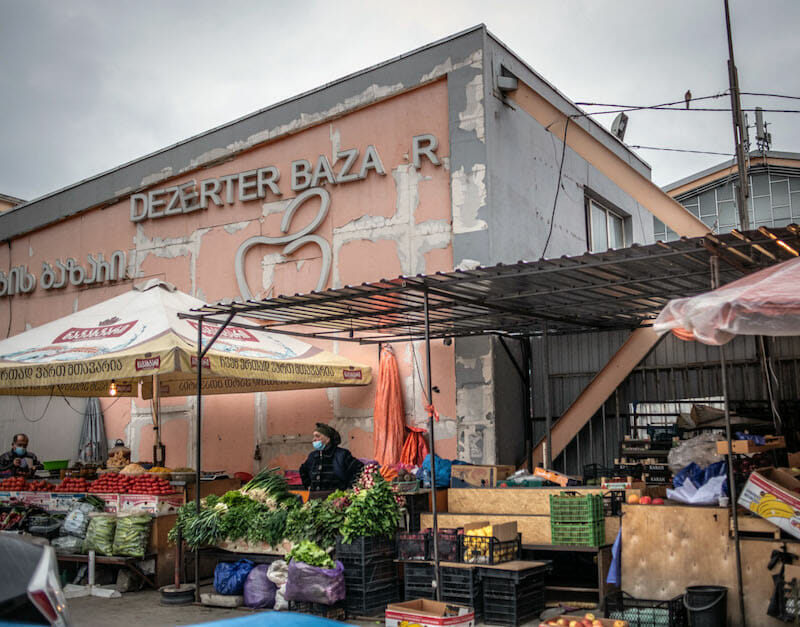 The Deserter’s Bazaar thrived because there were no supermarkets or shopping malls, and regulations were nonexistent. You could sell what you wanted, where you wanted – on the sidewalk, even in the middle of the street. For the hordes of displaced people from Abkhazia who settled in the vacant hotels around the train station in 1993, the bazaar was a lifesaver, providing people who had nothing with a means to eke out a living.

Last week we had the great pleasure of leading our first Tbilisi market walk after a 13-month hiatus due to the pandemic. “Tourists?” our friends perked up and asked wide-eyed from their stalls and counters. “Where from?” After a year that vendors say is the slowest they have ever seen, our presence offered a spark of hope.

After a year that vendors say is the slowest they have ever seen, our presence offered a spark of hope.

This was a different market than the one we wrote about last June. The city was just reopening after the first months-long lockdown. Nine cases had been detected in Georgia in one day, no one had yet died, and we hadn’t seen a tourist in three months. The bazaar was looking forward to their restaurant clients reopening in the summer, as well as the borders, although that didn’t happen. 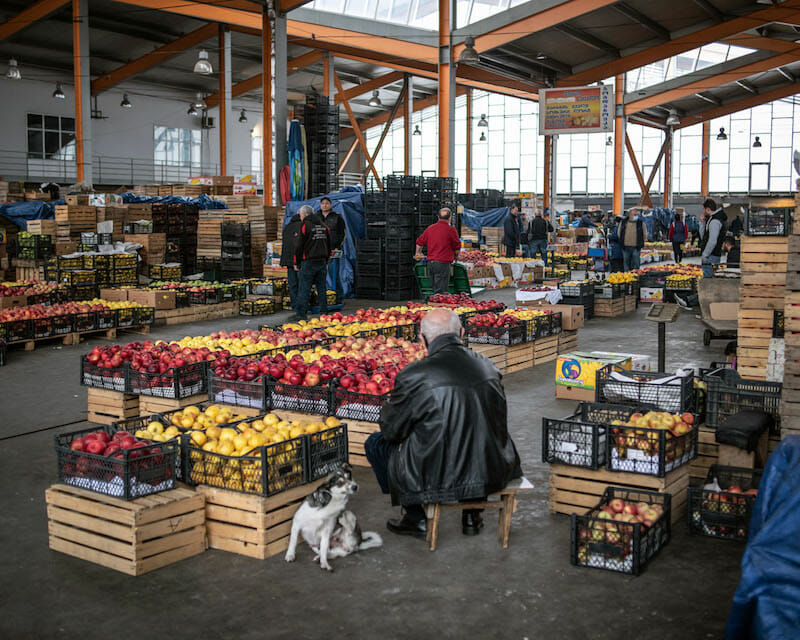 The government has officially admitted that we are now experiencing the “third wave.” On the day of writing, 1,030 cases of Covid-19 have been detected while seven people have died, bringing the total number of fatalities to 3,908. However, at the Deserter’s Bazaar, the only numbers people have been counting are lari, and unlike the Covid-19 numbers, they have been going steeply down.

“Badri went back to his village,” Vardo Chalagania says, pointing at the empty corner were Badri had his pickled vegetables displayed. Vardo makes and sells sauces and some of the best adjika paste we’ve found at the bazaar, although not as much lately.

“I only get a few customers a day. Who knows, I might have to go back to the village, too,” she adds.

We know how much Vardo and all the other vendors depend on their restaurant clients. What we didn’t know was how much tourism directly contributed to the bazaar economy, too. 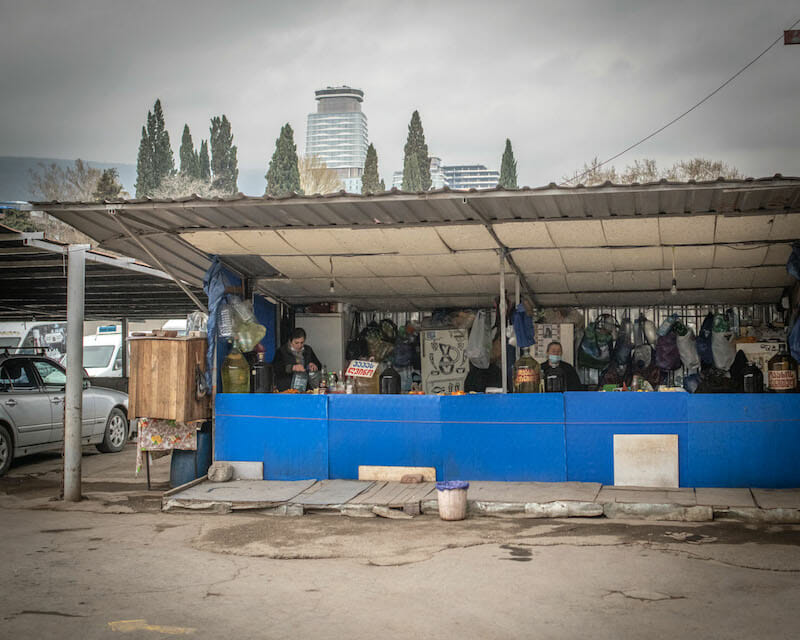 Before the pandemic, the overall bustle of the bazaar diluted the presence of tourists, although Miss Luiza, our spice girl, reminds us how there was always a line of people at her stall, and almost all of them spoke Russian.

“Seventy percent of my clients were Russian tourists. Europeans never bought anything, but Russians did,” she asserts.

Tina Nugzarashvili closed her stall in the “new” bazaar building because her goods – tkemali, spices, preserves and knickknacks – were bought mostly by tourists. Because she needs to supplement her meager pension, she sometimes goes out to the sidewalk to sell apples and fruits, as bureaucracy prevents her from selling them from her stall.

“When tourists come back this summer, I’ll open my stall,” she says.

Aleko, our nut dealer says tourists contributed to half his income. All the women in the churchkhela corner, even Maria the cured pork and basturma vendor, confirm that tourists – Russians in particular – are sorely missed. Only the butchers shrugged their shoulders when we asked about tourists. Aliev, a halal butcher, offered us “cognac” as a response.

Despite the Kremlin’s mid-summer travel ban to Georgia in 2019, the number of Russian visitors increased to 1.5 million that year, during which they spent $700 million in the country. In 2020, the number plummeted to less than 209,000, a decrease of 86 percent. 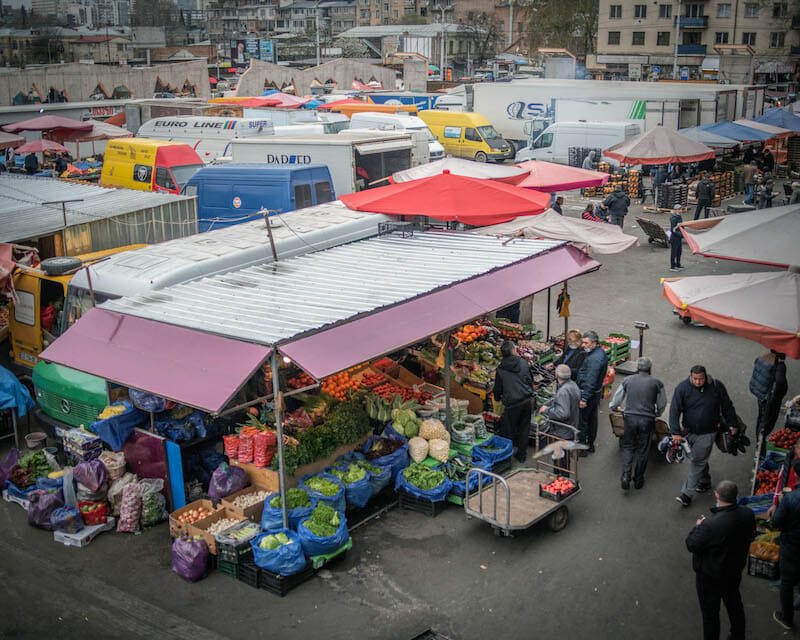 While low tourist numbers continue to frustrate the merchants of the Deserter’s Bazaar, people worry there is too much elbow room at the market with Easter just weeks away. This place should be bustling – Easter is the most important holiday in Georgia.

“The pandemic breaks everything, businesses, governments, hospitals; everything,” says Luiza, who was a doctor in Sukhumi before she fled her home in 1993 and opened her spice stall here. “Only when we kill the pandemic will things get back to normal.”