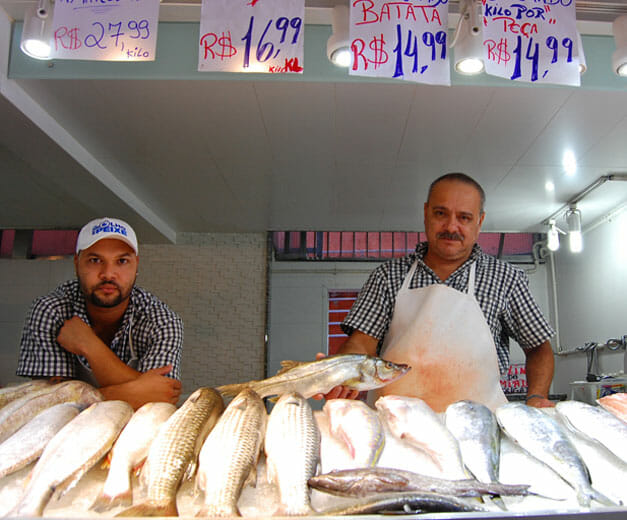 CB on the Road: Daytripping in Niteroi

From 6 a.m., Tuesdays through Sundays, over 500 customers – from housewives to Michelin-starred restaurateurs – stream into a two-story, tile-front fish market in working-class Ponta d’Areia, a neighborhood in Niteroi, across Guanabara Bay from Rio de Janeiro.

Since 2 a.m., stall owners have been out greeting fishing boats at docks across the city, where captains return from four- to 10-day trips along Brazil’s southeast coast, up to the Lake Region (Região dos Lagos, which includes the cities of Maricá, Saquarema and Cabo Frio, still in Rio de Janeiro state) and south to the state coastlines of São Paulo, Paraná and Santa Catarina.

The sellers bring the fresh catch to the Mercado São Pedro (named for Saint Peter, the fisherman), the largest fish market in Rio de Janeiro state. The market anchors a hub of seafood restaurants that together with Niteroi’s beaches and monumental architecture offer plenty to explore and devour for the adventurous daytripper from Rio.

From Rio’s Praça Quinze, a downtown seaside plaza, it’s a 15-minute ferry ride to Niteroi’s Praça Araribóia, named for a local indigenous chief (in native Tupi, Niteroi means “water that hides”). Ferry riders can peer up close at the small teal neo-Gothic island castle called Ilha Fiscal, which inspected ship cargo during the 19th century, and the massive box girder Rio-Niteroi bridge, a product and symbol of the infrastructure expansion carried out by Brazil’s military government during the mid-20th century. The 13 km bridge took five years and 10,200 workers to make. Urban legend says that the bodies of workers who fell to their deaths during construction still lie trapped in the concrete. On Niteroi’s shore, the ferry rider is greeted by small Oscar Niemeyer-designed monuments that look like astronaut toys. 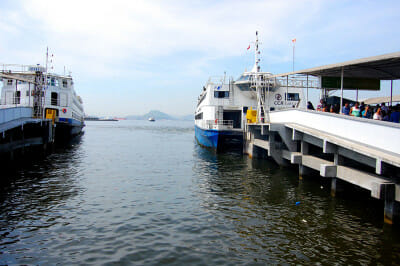 Niteroi’s most famous beach, a broad, tranquil ocean bank between two mountain peaks, is called Itacoatiara. Rare is the traveler who regrets taking the 20-minute cab or 30-minute bus ride (line 38, departing from the ferryside bus stop) to dip toes and watch surfers in Itacoatiara’s secluded waters. For those who would like to spend the day closer to Niteroi’s downtown, the Museum of Contemporary Art and its cousins, the Niemeyer theater and cultural center, allow visitors to wander into the utopian, political and beauty-loving story of Brazil’s most famous architect, who spent part of the military dictatorship in exile in France and returned afterward to still create work aiming to celebrate his country’s hallmark for “surprise and enchantment.”

We recommend bookending these activities with the local specialty: fish. Fishing has defined the Brazilian diet since indigenous times. In addition to observing St. Peter’s Day on June 29 each year, in Rio the bounty of the sea is also celebrated in December and January at festivals honoring the Afro-Brazilian spiritual figure Iemanjá. Year round, fish arrive in Niteroi’s market from both seafaring ships and artisanal fishermen who live and work around Guanabara Bay itself.

The market was founded in 1951 and since then has been run for the most part by Italian immigrants and their descendants. Shop owner Mario Mannarino’s father came to Brazil fleeing economic hardship in Italy after World War II and upon arrival in Rio, was directed to the Niteroi fish market because “that was where people spoke Italian.” According to Mannarino, in Rio during that time, for reasons of language and social networks, Italian immigrants were sent to fish sellers and newspaper stand owners for tutelage just as Portuguese immigrants were directed to bakeries, Spanish immigrants to fishing boats, and German and Polish immigrants to rural farms on the outskirts of Rio.

The concentration of 39 vendors in the Mercado São Pedro means they are competing both for the best prices and the best customer service; many shoppers develop relationships over time with a particular vendor. Home cooks and head chefs ask the same question: What’s the freshest today? In the Brazilian winter this is likely tuna, bacalhau (fresh cod, good for stews), sardines (caught by small-scale fishing families along Rio’s bay) and salmon (raised in Atlantic waters and flown in on ice daily from Chile). In the summer it’s namorado (literally “boyfriend,” all varieties good for grilling and white varieties good for ceviche), the redfish pargo and olho de cão (“dog eye”), often grilled, and the gold dourado, usually simmered in the Afro-Brazilian stew moqueca together with malagueta peppers, coconut milk and red palm oil. 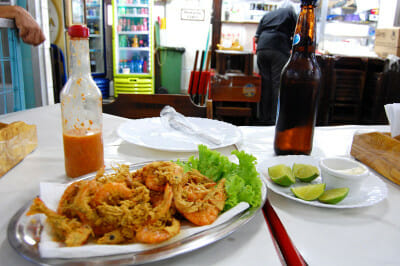 The available fare may change this June, when a list issued by the Ministry of Agriculture and Fishing could outlaw the fishing of several endangered species. However, both fishermen and conservationists are currently lobbying the government to consider more specific management plans for each individual species – a complete ban will go unenforced, they say, whereas participatory management and specific guidelines are necessary for environmental health in the long run. If you see parallels here to Brazil’s war on drugs, it’s just in time to have a pe-sujo (dive bar) philosophizing moment: pick out whichever fish has a cara boa (face that looks appetizing) and take it to the market’s upstairs restaurant level to be fried immediately and eaten with lime, hot sauce and a sweating cold beer. Second-floor specialties include fried sardines at Bar do Wagner, where you can talk football with Wagner, the ex-goalie of Rio’s Botafogo club, and beer-battered shrimp at Bar da Leda.

Whether your afternoon activities are in downtown Niteroi or on a more distant beach, it’s worth sticking to Niteroi (or frankly, making the entire trip across the bay) in order to eat the ceviche crafted from local ingredients every Thursday night by chef Cesar Augusto Antunes. Antunes grew up in Niteroi and studied gastronomy at local universities Estacio de Sá and Unilasalle; now he runs the kitchen at Niteroi’s Armazem São Jorge. The armazem (storehouse) specializes in craft beer to accompany its food, and the friendly staff can happily point you to local and international brews of all colors and notes. With ceviche, they recommend wheat beer, and the Mineira (from the state of Minas Gerais) Wäls Witte – light-bodied, orange-flavored and creamy, perfectly washed down with the flavor explosion of Antunes’s lime-seared white namorada fish, tangerine, red onion, cilantro and dedo de moça pepper ceviche. We were immobilized between the temptation to gobble it all down and the desire to let each bite seep slowly into the tongue. Antunes’s ceviche recipe is different every Thursday. One version salts and spices avocados for a rare incarnation of guacamole this far south of Mexico. Another uses ripe mangoes, also with red onion and lime, while still another uses geleia de pimenta, or spicy and sweet Brazilian pepper jam.

When we’re ready for a main course, we refer to the burger menu, also developed by Antunes. The most popular sellers are the artisanal cheeseburger, with a fat roasted tomato and cured white canastra cheese from Minas Gerais, and the picanha burger, made with the wildly popular Brazilian rump cap cut of steak, paired with cheddar cheese. Burger buns are delivered by a local bakery minutes after the kitchen opens each evening and offer a pillowy, golden conveyance for the beef, together with spicy homemade barbeque sauce that we always make sure to request. The menu lists which beer harmoniza, or complements, each entree, and we were pleased by the Funk IPA, a Rio de Janeiro pale ale brewed with the tang of passion fruit.

After burgers, we like to bask on the front deck of the bar, one of several adjacent patios that create a merry evening glow in the residential neighborhood of Icaraí. If we’re wise enough to save room, there’s beer-flavored picolé (Brazilian ice cream tube, the first of its kind) for dessert. Sol a Sol, a Niteroi based creamery, currently produces five flavors: Weissbier with orange, Dunkel with Belgian chocolate, Bock with hazelnut spread, Pilsen with apricot and IPA with dulce de leche.

Niteroi, saude! (Here’s to your health!)

For the coming months, the Niteroi Museum of Contemporary Art is undergoing renovations, but its gift shop is open at Mirante de Boa Viagem, Niteroi (tel. +55 21 2620 2400, Tues.-Sun. 10am-6pm). The Oscar Niemeyer Theater and Roberto Literary Center, which make up the Caminho Niemeyer, can be visited at Rua Jornalista Coelho Neto, Aterro da Praia Grande, Niteroi.
By
Catherine Osborn
, photos by
Catherine Osborn

Add to favorites
The Sea’s Bounty in Niteroi