Olhão in the Algarve doesn’t have the picture-perfect scenery – the beautiful rocky cliffs cascading into the sea – normally associated with the region. But this fishing town managed to avoid the overdevelopment that has plagued other fishing villages in the region, like Albufeira or Armação de Pêra, now cautionary tales of how not to approach urban planning.

At the heart of Olhão’s fantastic old city center, known for its cubist architecture, is one of Portugal’s best markets. It’s divided into two large red buildings with green domed towers, a distinctive feature that defines the town, especially when seen from the water. One building sells fish and shellfish from the rich Atlantic waters while the other has fruits, vegetables, nuts, cakes and cheese from the eastern side of the Algarve, which includes Faro (the regional capital) but most importantly the stunning Ria Formosa, a natural park that consists of lagoons and barrier islands. 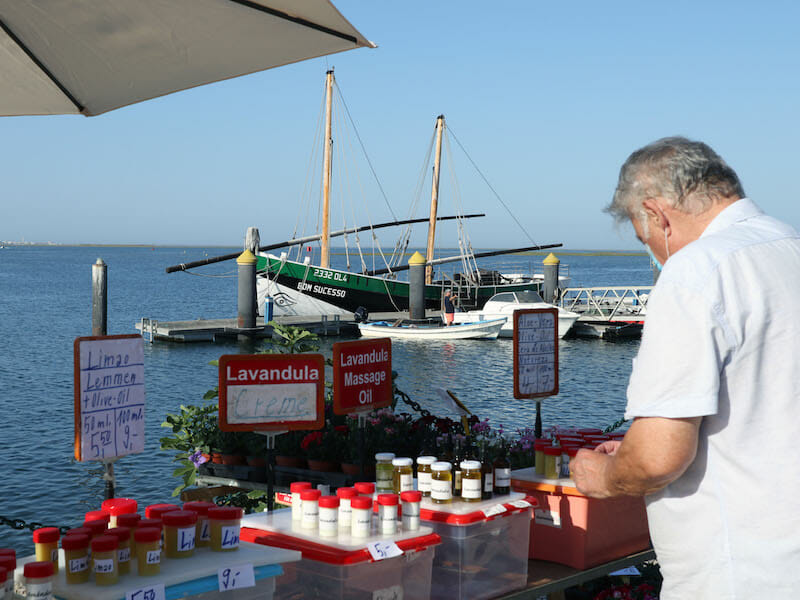 The market in Olhão is situated on the waterfront, along with a number of restaurants. It’s a joy to watch the sunset with a drink in hand or to eat some incredible seafood rice while contemplating the quiet blue waters. One of our favorite spots for the latter is Cervejaria Olhão, where Luísa Carmo has been cooking her Algarve specialties for the last 20 years. Before that, she used to have another restaurant on the town’s main drag.

Luísa originally hails from Culatra, one of the barrier islands that make Ria Formosa so special. Perhaps most famous for its long stretch of sandy beach, the island is also home to many fishermen and shellfish gatherers. Luísa left at 18 and settled in Olhão. She loves cooking, even on hot summer days, like the one we experienced recently. “I feel good cooking, to me it’s a pleasure. And I like to do it with the family,” she told us.

While some chefs consider the Algarve to have some of the best fish in the world, the shellfish is equally extraordinary.

Her sister Patrícia works as a waitress and still lives in Culatra, taking the ferry every day. On some days, Luísa starts working at 7 a.m. Even though she is alone in the kitchen, that doesn’t prevent her from making dishes that take longer to prepare such as arroz de marisco (seafood rice) or cataplana (a traditional Algarve seafood stew cooked in a copper pot of the same name). We were lucky to taste the former, a magnificent version of this beloved soupy rice dish. Incredibly, it had more seafood than rice: clams, shrimp, king prawns, two kinds of lobster and langoustine were in such abundance in the stainless steel pot that we found ourselves wishing for more rice. (It takes about 40 minutes to prepare, so we recommend ordering in advance.) Her sardines with sweet potato and traditional salada montanheira (in which the tomato and cucumber are finely chopped) were also as fresh as you can get. 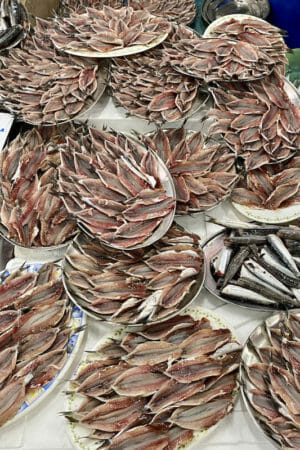 She normally leaves after 3 p.m., at which point her son replaces her in the kitchen. “He studied in the Hospitality School in Faro so he has a more gourmet style, but still he asks me many questions,” said Luísa. She also tried to study at the same school, but the “crisis came” (the bailout and financial crisis between 2010 and 2014) and she couldn’t make it work. More recently, the 62-year-old has been thinking about retiring and going back to Culatra. “I love this but it’s a lot of work and planning,” she explained.

After our seafood-rich lunch, we strolled around the market for a visual feast. While some chefs consider the Algarve to have some of the best fish in the world, the shellfish is equally extraordinary. For example, the best scarlet shrimp eaten at Ramiro, the famous cervejaria in Lisbon, come from here. The impressive quality and diversity is on display in Olhão’s effervescent market stalls, from sun-dried litão (blackmouth catshark, a traditional delicacy from Olhão) to octopus eggs or the deboned biqueirão (anchovies), ideal for Algarve’s vinegary version of ceviche, with olive oil, garlic and oregano added to the marinade. All at very reasonable prices, especially compared to Lisbon or even Setúbal, a city also known for its fish and seafood.

The abundance of vegetables and fruits in the other pavilion is just as impressive. The building is also peppered with stalls selling cheese, meat and dried fruits/honey, some of which sell the delicious folar de Olhão or the local versions of piripiri sauce. On Saturday mornings, the market spills out of the two buildings onto the waterfront, where farmers sell their seasonal produce. Enticing fragrances, improvised stalls and amazing flavors delight the senses. On our most recent visit we tasted melons, tomatoes, almonds and oregano. 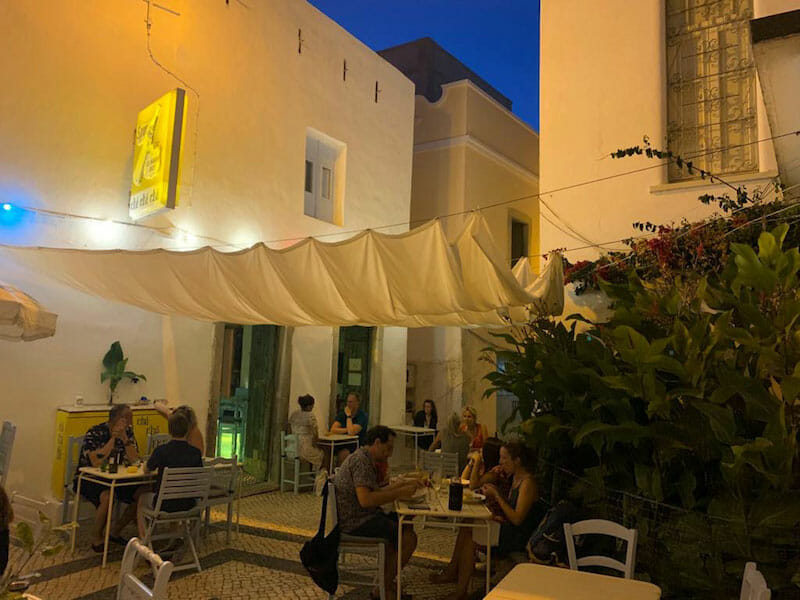 We also ran into the food and travel journalist Kevin Gould, who has been living in Olhão for a decade. Two years ago he opened a restaurant called Chá Chá Chá, not far from the market, in the intricate maze of the cubist neighborhood of Barreta, which is reminiscent of the Moorish period even though most structures were built in the 19th century. The tables outside make the most of the narrow streets – in this pandemic summer, everyone wants to sit outside. But Kevin says the Algarve is still suffering from a lack of tourists. “During the lockdown we were doing 30 solidarity meals a day, and now we’re helping 19 families with kids, the unemployment is huge here,” he told us. Kevin has set up a food bank that anyone can contribute to; already his clients have been incredibly generous.

Those visitors who make their way to Chá Chá Chá find a menu that is a reflection of the market: “I just go there every day and see what is best. Today for instance is the red mullet,” Kevin said. Forget being the best in Portugal, Olhão’s market “is one of the best in Europe, believe me,” he added.

Add to favorites
Dining in Olhão