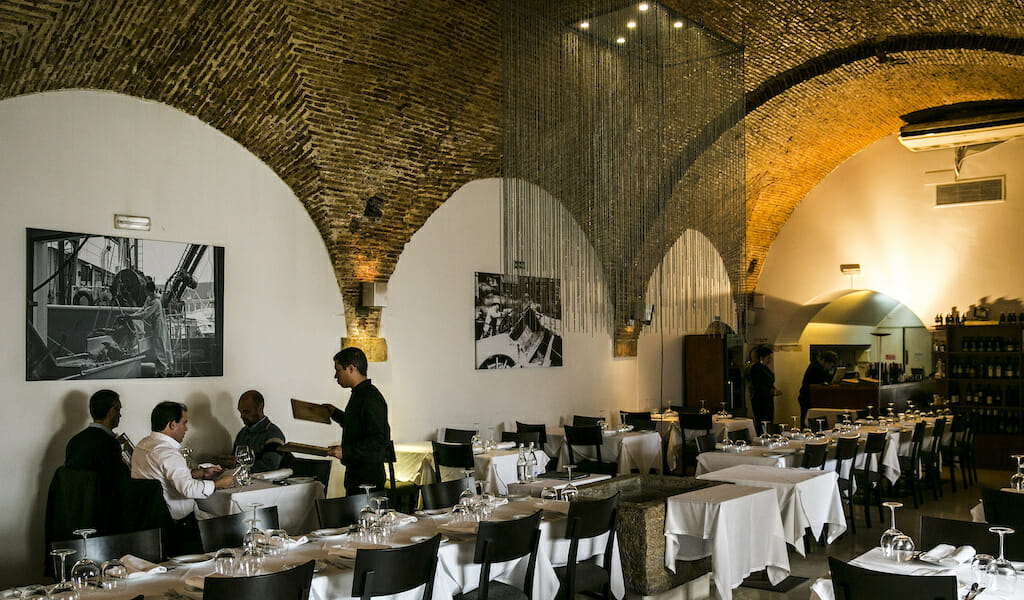 Scan almost any menu in Lisbon and you’re bound to find bacalhau (salt cod) in some form. That should come as no surprise: Lisboetas have long had a taste for this preserved fish, which can be found in a number of traditional dishes.

Yet despite being seemingly everywhere, there are very few spots that focus exclusively on bacalhau. A Casa do Bacalhau, as its name suggests, is one of them, using salt cod in almost everything it serves except dessert. Open since 2000 in the Beato neighborhood, the restaurant is housed inside the old stables of the Duques de Lafões palace, which was built after the 1755 earthquake.

The neighborhood left its royal past behind in the 19th century and morphed into an industrial center, only to experience a decline in the late 20th century. Recently has it seen a resurgence; amidst this sea of new, it’s comforting to see a relative old timer like A Casa do Bacalhau doing brisk business. 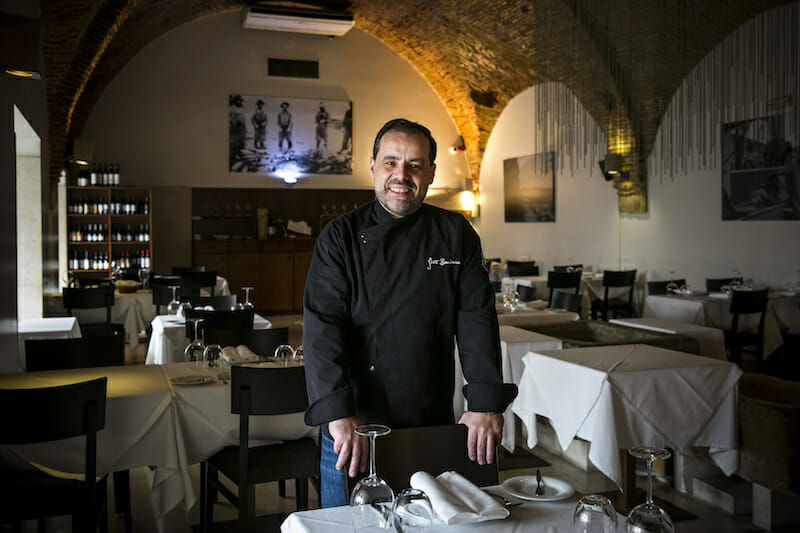 The current owner, João Bandeira, took over the reins in 2011, and presently around 90 percent of the menu contains salt cod. Further bolstering its bacalhau credentials, the restaurant won the inaugural competition for Lisbon’s best pataniscas (salt cod fritters) in 2017, held as part of the annual Fish Festival. The version here is crispy, not greasy and, most importantly, has large flakes of cod, not bits shredded in threads that vanish into the batter of flour, water, parsley and egg. “It does have a lot of cod in it,” adds João as we cut one in half and play “spot the fish.”

Every year, João goes to Iceland to check the quality of the bacalhau he orders for the restaurant – usually 15 tons a year, perhaps closer to 20 tons in 2017. He even goes out with the fishing boats for one night, intent on seeing the fish from ocean to table. His high regard for the product is even on display in the restaurant: in addition to the cod itself, the walls below the vaulted brick ceilings are covered with black and white photographs of cod fishermen. Iceland has a smaller market, which allows for more artisanal fishing by hook as opposed to nets. “It’s a little bit more expensive than the cod from Norway but it’s worth the difference,” says João.

During difficult times cod became known as the fiel amigo (the faithful friend), one that people could always rely on.

Portugal is the biggest consumer of cod in the world. Our love for an imported fish, especially when we have such a large coastline with excellent fresh fish reserves, has deep connections to our history. Originally the Vikings that came in search of salt from the Portuguese salt pans showed locals how to preserve cod and traded the fish for salt. As early as the 15th century, according to some reports, the Portuguese, like the Basques, crossed the Atlantic to fish cod off Newfoundland and Canada. For religious reasons the Portuguese needed fish for Lent and the many fast days on the calendar. Cod was easy to preserve in salt and take to the countryside. 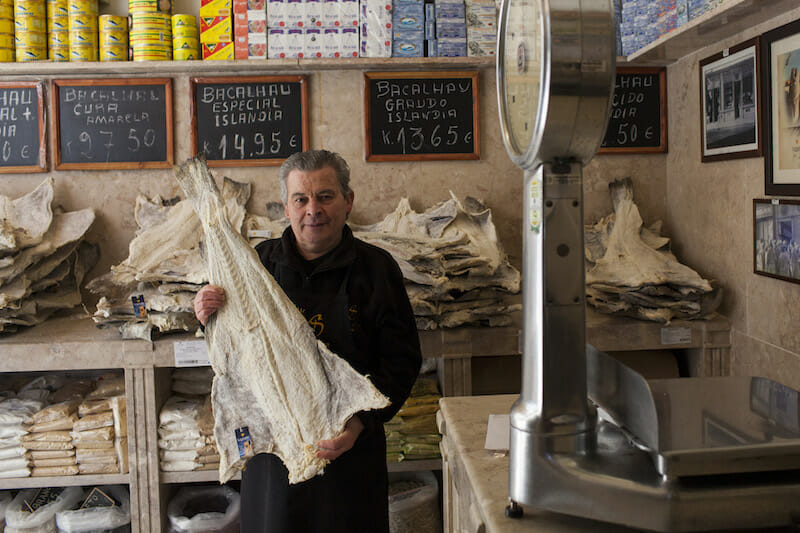 Over the centuries, salt cod became one of the most affordable proteins and a popular food staple in a poor country. In the 20th century, during the dictatorship, the fishing industry was protected, the fleet expanded and prices lowered. Consumption of cod increased all over the country and in the former colonies. Even during the Second World War, the so-called white fleet never stopped crossing the Atlantic. During these difficult times cod became known as the fiel amigo (the faithful friend), one that people could always rely on. When protective fishing laws were enacted in 1968, many boats stopped running. The death knell came in the early 90s, when Canadian cod banks collapsed because of over fishing and the remainder of the Portuguese cod fleet was mostly dismantled. Only a few cod fishing boats remain nowadays, and most bacalhau is imported from Norway and Iceland.

Once it reaches Portugal, most cod is salted and then later soaked to remove the excess salt before cooking. A Casa do Bacalhau has this done at a factory north of Lisbon, which prepares a special cut with thicker loins for the restaurant. “I go there often to check the levels of salt,” says João. “Unfortunately, we cannot soak all the cod here as we don’t have the capacity – it needs to be done in a big machine that keeps it cold. We only soak the most expensive cod, like yellow cured cod, in the restaurant.” A proper soak makes all the difference. “For this kind of thick loin, it should never soak for less than four days,” he says.

The menu at A Casa do Bacalhau is split between classics that are always available and a rotating list of innovative dishes. Out of the former, we normally go for the pataniscas or the bacalhau com broa (salt cod with corn bread), a 400 gram piece of cod – enough for two – with roasted potatoes, turnip greens and corn bread. Like all the cod dishes in this restaurant, the fish is cooked slowly in olive oil over a low heat for 8 to 10 minutes, leaving it succulent and full of flavor. “People have the habit of cooking cod on the grill or in the oven at a high temperature,” João explains. “But it’s not the best way to cook the fish, it gets overcooked and dry.”

From the less traditional dishes, the salt cod loin cooked at a low temperature with the unexpected sides of a carrot puree and citrus fruit is really outstanding. The best sellers, however, are our two favorite classics: the bacalhau com broa, and the award-wining pataniscas. The latter is thought to have been created in Lisbon with fish leftovers – in times of hardship a single piece of cod could make a lot of fritters. 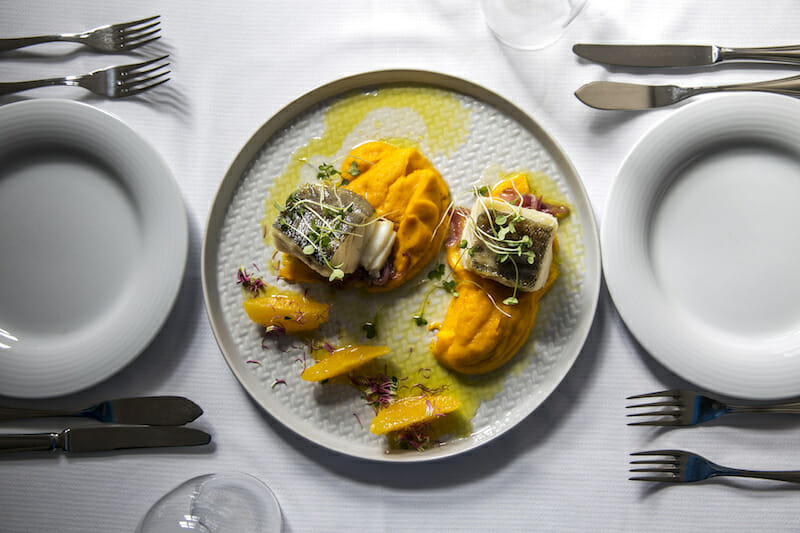 Sometimes you can find meia-desfeita (chickpeas with salt cod), another dish with roots in Lisbon, on the menu, and in the summer there are a number of lighter cod dishes. For those who are averse to bacalhau, there are other options, like octopus or pork.

It may serve the classics, but A Casa do Bacalhau is also embracing change, particularly Beato’s newfound popularity – across the street, Hub Criativo do Beato, a former factory complex housing start-ups and tech companies, is growing and new restaurants, craft breweries and bars are opening in nearby Marvila. “When we started no one would come to Beato, people used to say it was too far. Now probably 50 percent of our customers are Portuguese and the other half are Brazilian, Spanish and Italian,” says João. It also probably helps that there’s no other place like it in the neighborhood. “The only competitor we have is Laurentina, in another part of the city,” he admits.

In August, A Casa do Bacalhau will close for renovations, particularly in the kitchen. But it won’t be anything like the renovations João did when he first bought the restaurant. Workers had to dig really deep to restore the brick and stone walls. The former horse stables are a cozy spot and a reminder to Lisboetas that bacalhau has long been a “faithful friend” to so many. 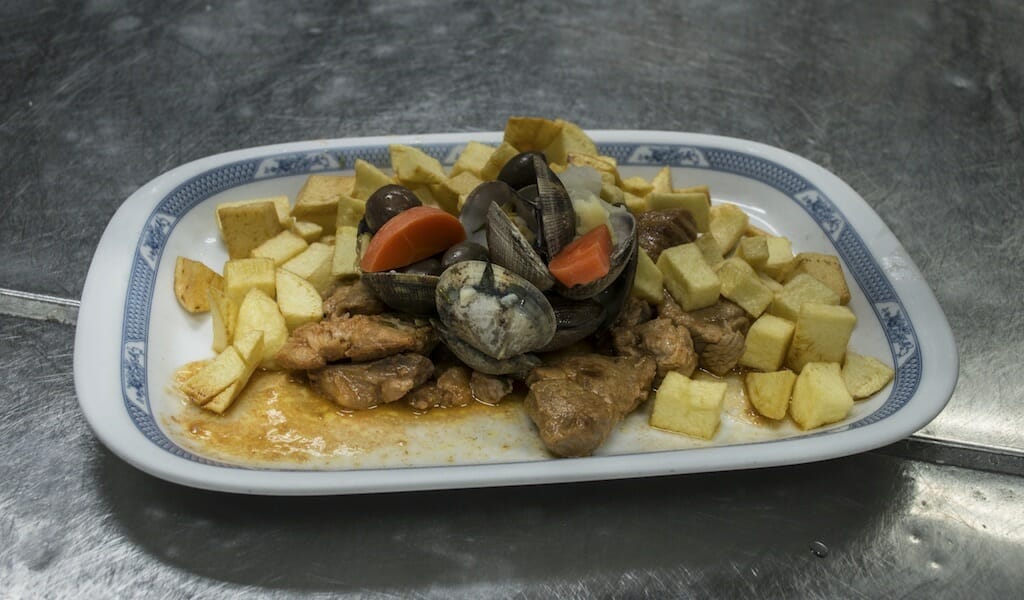 Tasca Tables: A Ideal, Saved by its Good Food and Bad Location

Lisbon | By Tiago Pais
By Tiago Pais
LisbonLisbon is changing every day. That change is noticeable all around the city in different ways. On any given day, a new Hollywood celebrity might be joining the ranks of current residents Madonna, Michael Fassbender and Monica Bellucci. This famous person will likely buy an enormous loft in a neighborhood where long-established shops are giving…