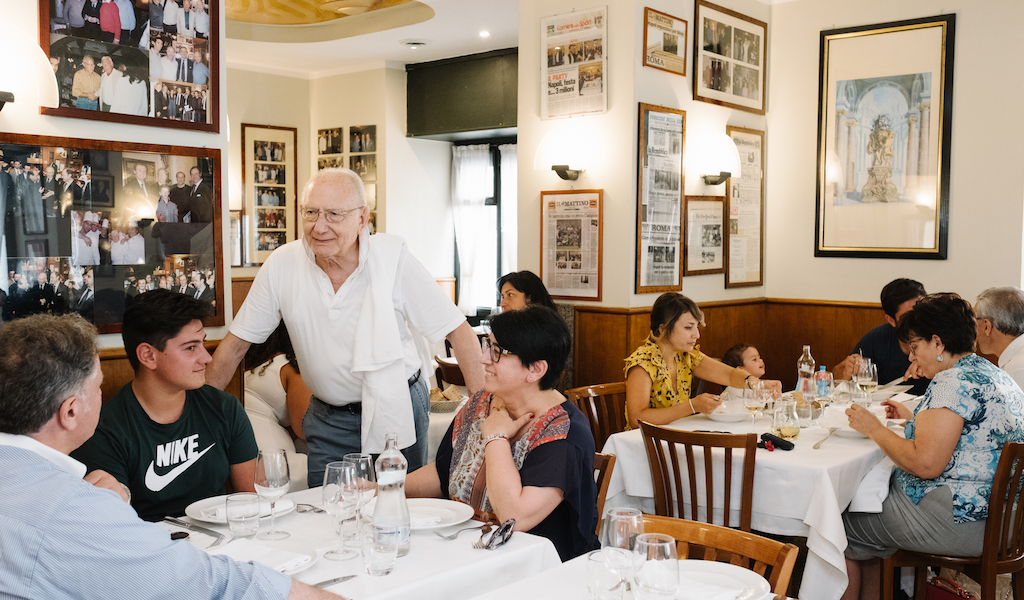 On a recent visit to the market of Sant’Antonio Abate, a pilgrimage site for fresh produce, we made friends with Salvatore, a young Neapolitan chef who was buying fruit and vegetables for his restaurant. We thought nothing of it until we bumped into him again, this time when he was buying fresh bluefish, the symbol and pride, he told us, of his restaurant.

Our curiosity piqued, we asked where he worked. Mimì alla Ferrovia, he told us, a name we immediately recognized – it’s one of the custodians of Neapolitan gastronomic orthodoxy. And Salvatore Giugliano, an innovative young chef of 27, is now at the helm of this historic restaurant.

Since opening in 1943, Mimì has been a point of reference for lovers of good food. It was founded by Emilio Giugliano, the so-called Mimì, and his wife, Ida. Mimì had a passion for horses, which is why the horse is the emblem of the restaurant.

Emilio (Mimì) worked closely with his nephew Michele (somewhat confusingly, also known as Mimì) in the kitchen for 30 years, and after the death of the original Mimì, the second Mimì, who learned the art of cooking from his uncle, led this institution into the new millennium. 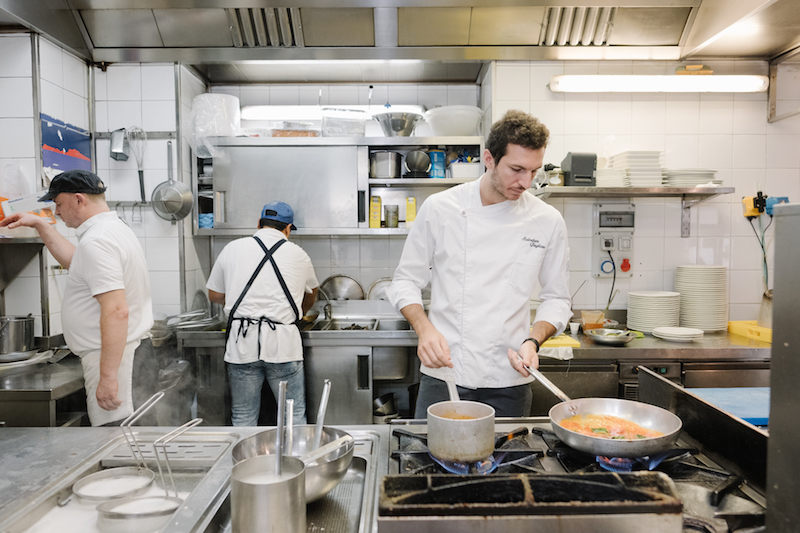 Three years ago, after spending just over 70 years working in the kitchen (he began working alongside his uncle at the tender age of 11), Mimì handed over the reins to his son Salvatore, who is keeping up the family tradition while also bringing a touch of creativity to the menu.

When deciding how, exactly, he’ll innovate, Salvatore builds on two immutable elements: the historic recipes of the Neapolitan kitchen and the highest quality ingredients. “Only that now,” Salvatore told us, “everything is assembled with a lighter, more modern idea of ​​cooking, using new techniques. Take the traditional dish of squid with green hot peppers, which I serve with provola mousse – it’s emblematic of how I’m tweaking classics so that they feel fresh but are still linked to the flavors of our memory, the tastes we grew up with.”

“Customers seem very happy with his innovations,” added 85-year-old papà Mimì, who still helps out in the dining room. “Classic dishes are still on the menu, so regulars know that they can always taste the great Neapolitan culinary tradition here. But if they want to splash out, they can try something slightly new, which motivates them to return.”

There are some dishes that have become symbolic of Mimì’s high quality. For example, everyone comes here to taste the puparuolo ‘mbuttunato (grilled peppers stuffed with a mixture of milk thistle, ham and bread), which here, Salvatore told us, “is served to all incoming customers, like bringing a bottle of water to the table.” 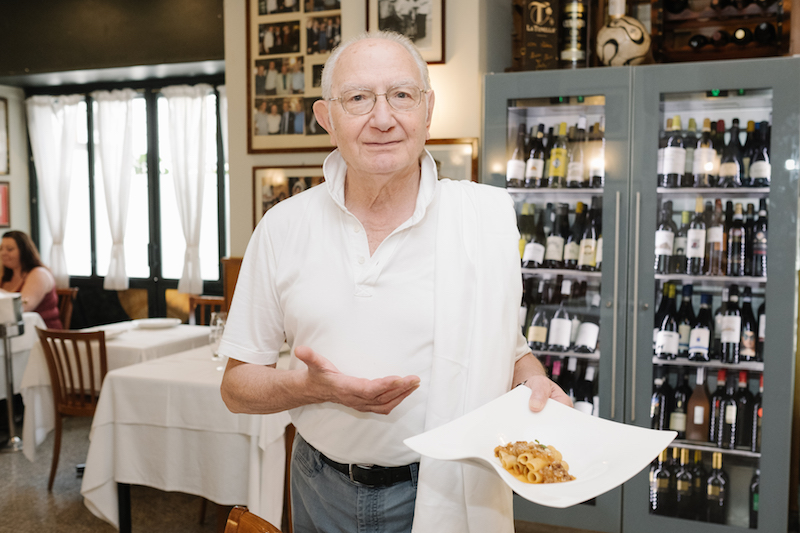 For appetizers, the offerings are so varied that you may not find yourself looking at the rest of the menu. They serve escarole, cabbage and squash flowers stuffed with light ricotta, battered and then fried. Papà Mimì himself recommended a buffalo mozzarella ball with a small bit of ricotta accompanied by tomato sauce. And finally, from the sea, there’s seared squid or bluefish.

If you still have enough room for a “first” (i.e. pasta) course, you’ll be spoiled for choice. Neapolitan cuisine may be a rich baroque cuisine Salvatore told us, “but excellence is achieved in simplicity. Like when pasta is combined with simple ingredients: with potatoes, with beans.”

“I’m tweaking classics so that they feel fresh but are still linked to the flavors of our memory.”

And in fact, Mimì makes a wonderful pasta and potatoes, a classic Neapolitan dish. The provola cheese melts completely but continues to give a strong smoky flavor to the dish, while the potato almost disintegrates but binds to the perfectly cooked pasta. It’s a successful three-way marriage, with pieces of bacon acting as witnesses. We recommend eating it while dining alone and then enjoying five minutes of peace – no distractions.

Another excellent first course is the pasta and beans with mussels, a standby of Campania cuisine, which here reaches unimaginable heights. “This is the only pasta and beans better than the one that my mom prepares,” Alberto, a regular customer, told us on a recent visit. And in our opinion, this is the highest compliment for Mimì’s chefs, because in Naples the mother is always the best cook.

And finally the classic seafood plate, the linguine alla Mimì with shrimp and seafood seasoned with delicious Piennolo tomatoes that grew on the slopes of Vesuvius. 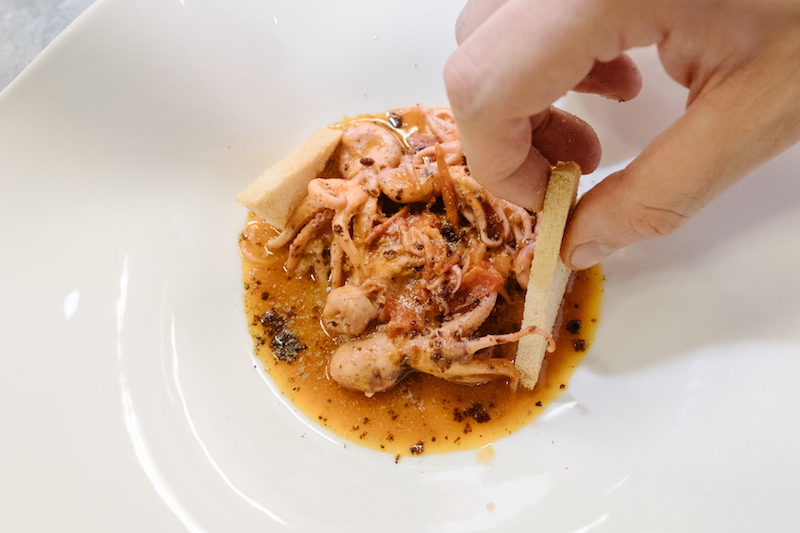 The restaurant’s antique interior is beautiful: frescoes on the ceiling, photos of their illustrious customers, like Federico Fellini and Luciano Pavarotti, on the walls, overall an elegant setting but with reasonable prices. And surprisingly, as the name states (ferrovia means “railroad”), this good-looking spot is close to the central station area – a happy oasis in a chaotic area. “Usually our customers are professionals, employees of the nearby business center and teachers of the nearby university,” Salvatore told us.

When it comes to the second course, fish is king: baccalà cod, octopus and, above all, the catch of the day. However, do not miss a generous slice of eggplant parmigiana (a dish that can be eaten in Naples as an appetizer, first course, second course or side dish). “Mimì’s parmigiana is the best in Naples. Salvatore has the golden hands!” exclaimed Sofia, a regular customer, on our most recent visit.

To close the meal there are all the traditional Neapolitan desserts, from pastiera to the babà – the waiter will advise you what’s best on that day. At the end of our meal, we called out to our new friend, “Salvatore, bring us a great coffee!” And the kind Salvatore answered: “For a great coffee, you have to go to the bar across the street.”

We didn’t complain. Mimì alla Ferrovia, after all, is a temple of good food. We’re happy to get our coffee elsewhere. 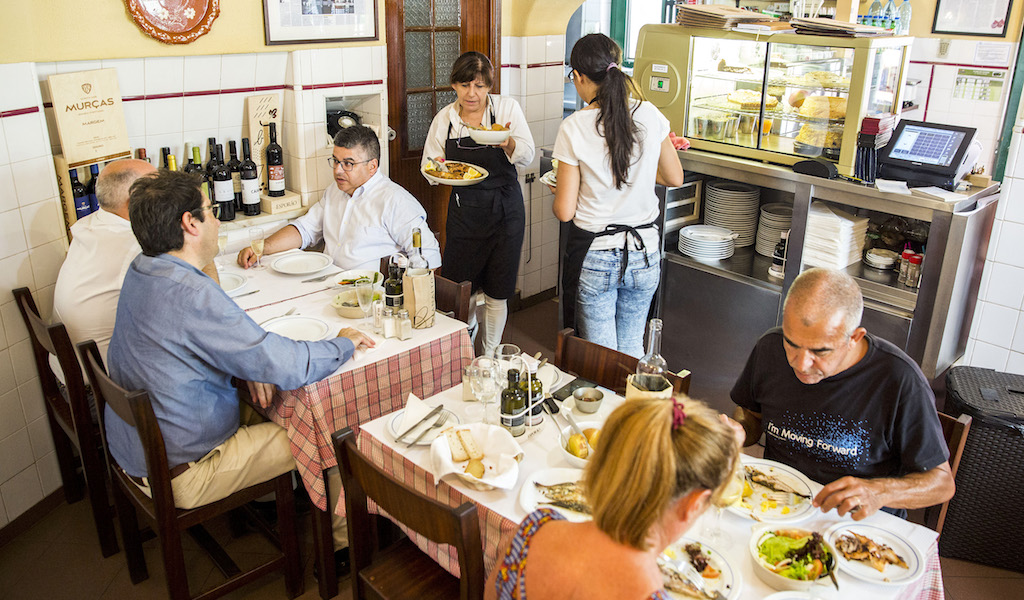 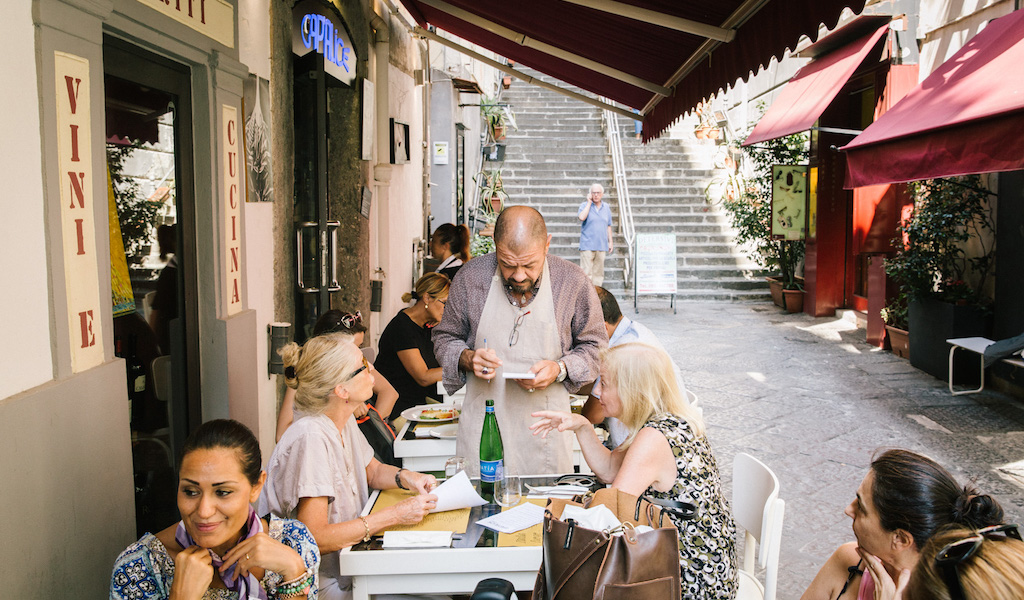 Taste the best Campania products on our Naples walk!

Naples | By Amedeo Colella
By Amedeo Colella
Naples -- The seaside district of Chiaia, perhaps best known for Via Caracciolo, a boulevard with sweeping views of the Bay of Naples, is the most elegant neighborhood in Naples. Long the seat of the Neapolitan aristocracy, the area is studded with Art Nouveau palaces, elegant boutiques, and Villa Pignatelli, a house museum with an…