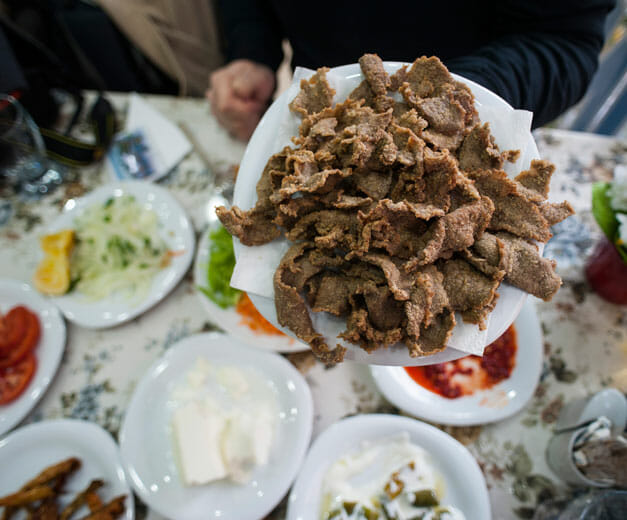 The city of Edirne sits on the borders of Bulgaria and Greece in the far northwestern and European portion of Turkey. Once the capital of the Ottoman Empire, Edirne has been occupied for thousands of years, dating back to the Romans and Thracians before them. While no longer the seat of an empire, Edirne could still be considered a culinary capital for tava ciğer, or fried liver. Two things are constant companions to travelers venturing into Edirne: glistening portraits of famous oiled-up wrestlers (a big annual contest is held nearby) and innumerable small restaurant fronts featuring a vat of boiling sunflower oil. The aroma of meat cooking in these vats is distinctive and primal, instantly activating salivary glands or rumbling stomachs.

It’s 9 a.m. Morning light glints off of the swelling banks of the Meriç and Tunca rivers, reflecting off simitçi carts luring in their daily customers. We are enjoying our second cup of tea with İlhan Usta, one of the proprietors of Meşhur E 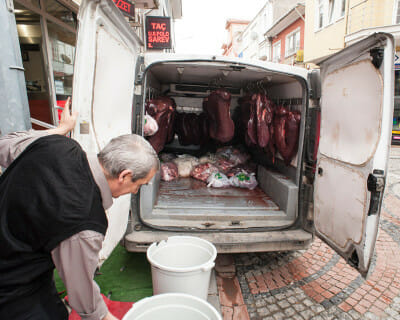 dirne Ciğercisi, while waiting for the liver man to arrive from Bursa. The screech of brakes and a clattering on cobblestones herald the arrival of a sleepy-eyed but jovial man in a royal-blue sweatshirt and plain white van. Swinging on hooks in the back are gaggles of juicy red livers from young bulls. İlhan prefers the animals to be about a year and a half old and sought out the ranch in Bursa for the particular quality of its meat. Bulls are chosen because they have fewer blood vessels in their livers, speeding up the processing of the meat and improving the overall texture.

After hauling 10 slabs of meat in white buckets to the fridge, İlhan selects several livers and proceeds to a centrally placed square table. Good liver lasts up to four or five days, after which a particular stink signals that it is time to call the liver guy back. İlhan laughs as he snaps a hairnet onto his balding head and prepares for the arduous task of slicing the liver into paper-thin pieces. Veins, sinew and tough patches are carefully removed with a long, razor-sharp knife. Every few minutes the click and whir of the sharpening steel signals that another portion is done.

İlhan of Meşhur Edirne Ciğercisi used to be an army officer, but in 1998 he became an apprentice to his father-in-law, Kazım. Kazım began as an apprentice in the same location in 1962. He would later inherit the restaurant from his master and perpetuate 100 years of continuous liver sales in the same location. For at least that amount of time, liver in Edirne has been fried. However, this has not always been the case.

İlhan recounts a story of how cooking liver grew out of necessity, a time when Ottoman soldiers were marching to war in the Balkans. Edirne was once a resting point for soldiers after a week of hard riding to the front. Cattle were slaughtered en masse to feed the hungry men, and to make use of as much meat as possible, the liver, head and other organs were processed for consumption. Originally the liver was cut into steaks and slowly grilled, but the skill needed to cook the meat instigated a shift to thinly sliced, fried meat. 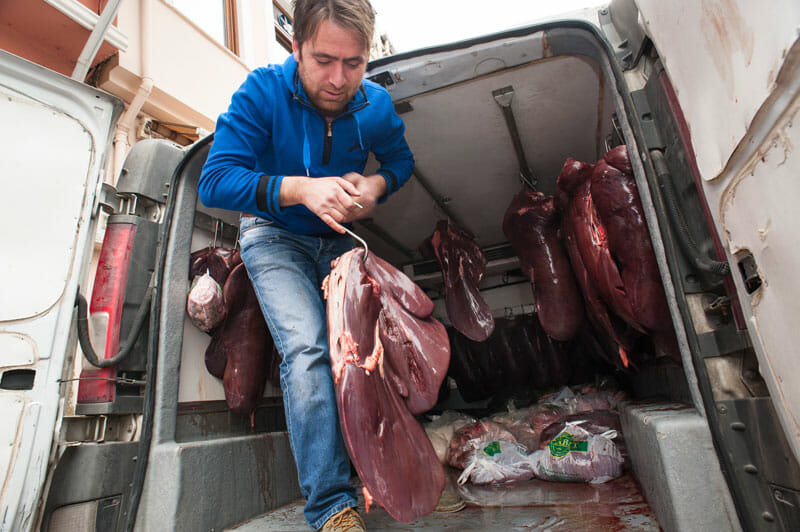 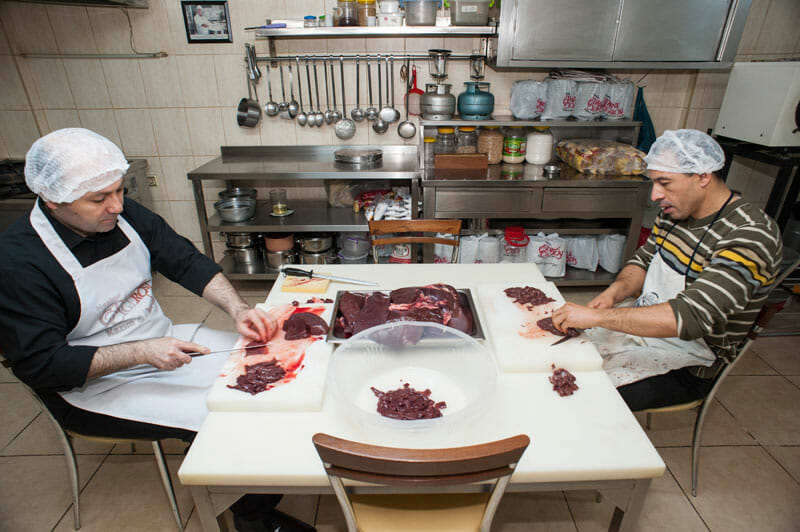 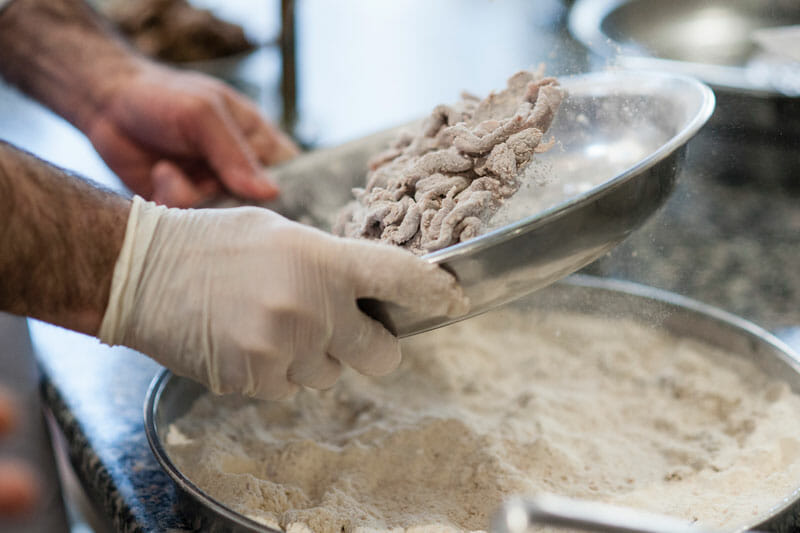 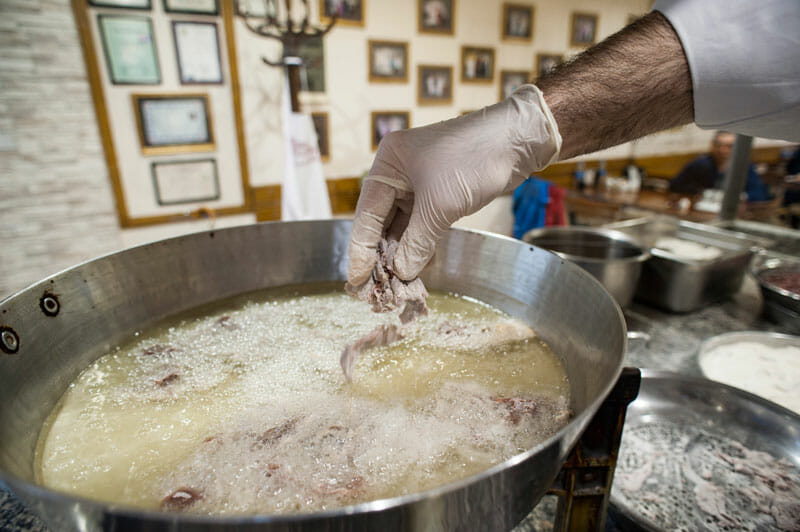 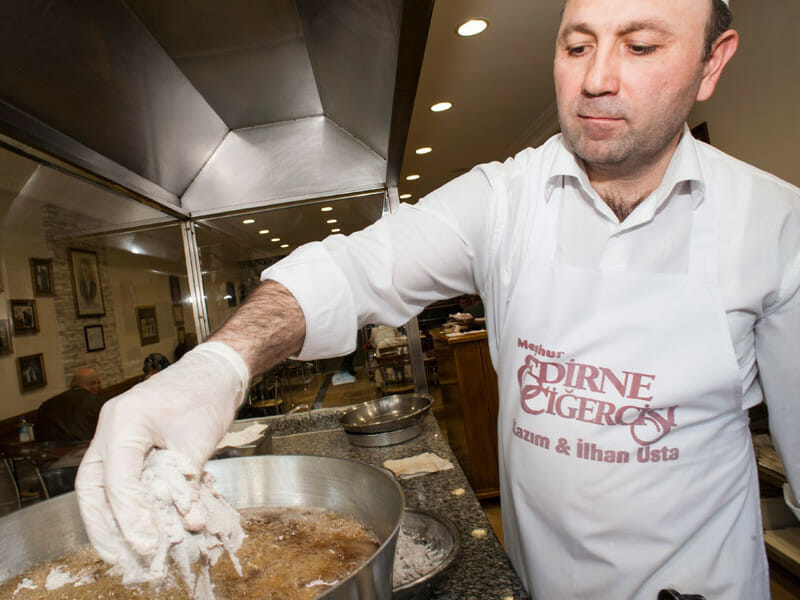 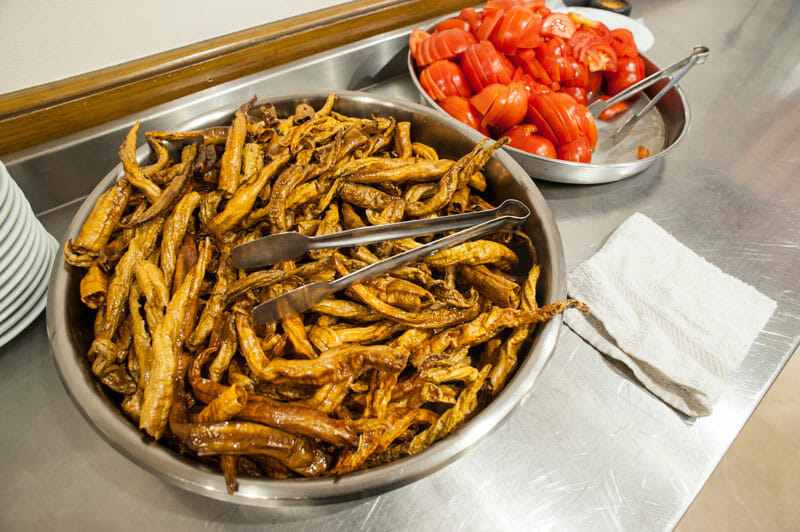 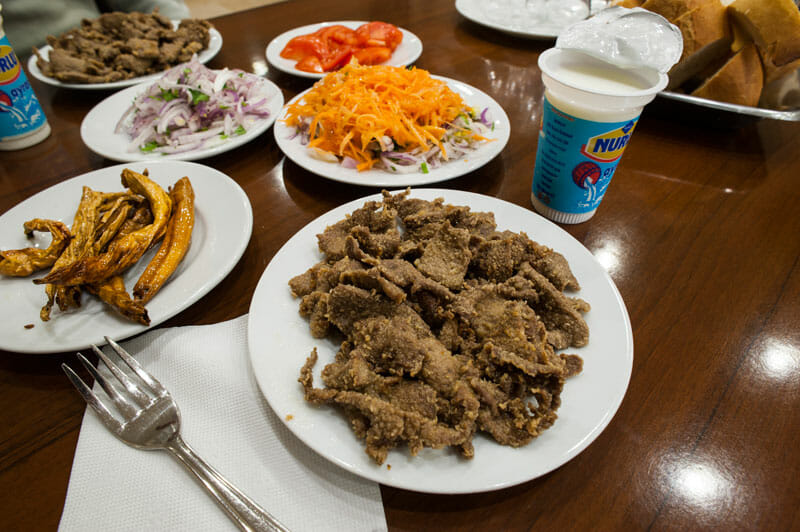 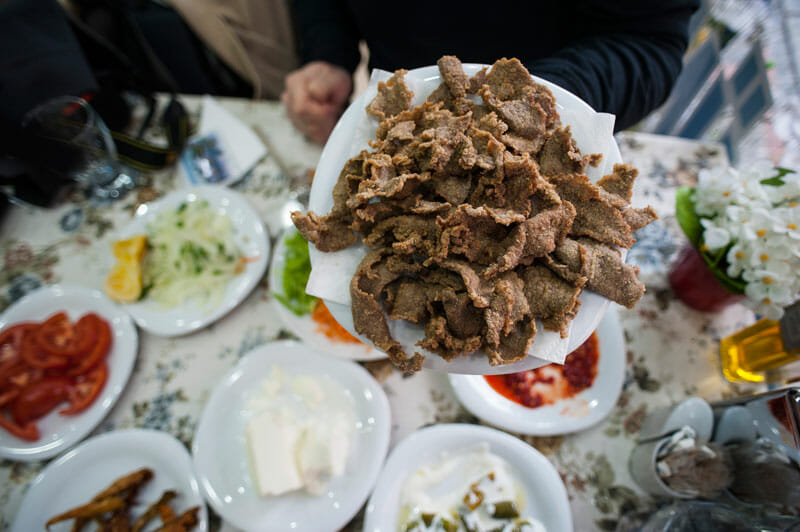 After hours of processing at Meşhur Edirne Ciğercisi, the first customers begin to show up around lunchtime. The freshly sliced liver leaves are sprinkled with a little salt and left to drain before being tossed lightly with flour. “Too much flour means you spoil the quality of the oil,” İlhan says. “It burns. You need to get rid of the excess.” A test slice is gingerly placed in a hot pan of oil, which immediately erupts with fizzing and bubbling. İlhan proceeds by adding the rest of the liver. He constantly stirs, noting the color, and after mere seconds carefully ladles out the finished product. On a busy day, Meşhur Edirne Ciğercisi will go through about 100 kilos of liver and 30 liters of sunflower oil. “With the oil, you can fry with it only two or three times before it must be changed. On the fourth time you can tell the oil is bad…. Because oil costs a lot there are places that do not change the oil.”

Over at Akgünler, Erdi Mustafa Çelenk stands at attention in crisp white chef’s garb in front of our table as we survey a massive spread of dishes. Each is meant to complement the liver lovingly placed in front of us in a different way. The water buffalo yogurt stands out, sitting in a firm rectangle in the center of the table until greedily pounced on. A smile dances across his young, cleanly shaven face while he describes to us how at a young age he impressed a liver usta while prepping food in a restaurant after school. Now he is one of two chefs at Akgünler, a small establishment perched on the edge of a thoroughfare sprouting with many different purveyors of liver. With the continual turnover of restaurants in the competitive tava ciğer scene in Edirne, the energy at Akgünler seems to support its survival in an industry where many restaurants offer almost the exact same thing. 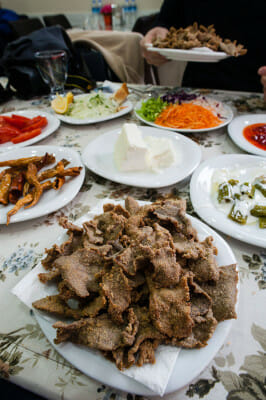 When tava ciğer is delivered to the table, there are several dishes that almost always appear with it: freshly cut tomatoes (light pink ones from Trakya when in season), as well as bread, green peppers, spicy red pepper sauce, onions and sour, fresh ayran (a salty yogurt drink). Possibly the quintessential ingredient, however, is the Karaağaç pepper. Grown a few kilometers from Edirne near the Greek border, the pepper is harvested green in August and dried for just over a month. Before being brought to the table, the peppers are dropped into the same oil as the liver, frying inside and out until they are the consistency of volcano-flavored popcorn.

Many of the liver restaurants in Edirne share very similar names but are different in quality. Please take care to check the name carefully if you seek out our recommended spots.

Meşhur Edirne Ciğercisi
Found off the beaten liver track near the fish sellers and restaurants just off of Saraçlar Caddesi. The crowds are less than those of some of the bigger restaurants, but the quality of the ingredients is exemplary. A great place for top-notch liver and fast service.

Edirne Akgünler Ciğercisi
A small but formidable restaurant with lots of side-dish options near some of the tava ciğer giants outside of Edirne’s main covered pazar. Chef Erdi Mustafa Çelenk recommends the cacık as a good way to cut the extreme spiciness of the fried peppers, but make sure to leave room for the trileçe cake made by a local Albanian family.