When you live in a medieval town that is as beautifully preserved as the little Catalonian hamlet of Peratallada, you are never too old for dress-up. All year round, these worn stone walls and charming plaças effortlessly take visitors back in time to the 10th century.

However, on the first weekend of October, the sights, sounds, smells and tastes of the Middle Ages return to the narrow streets of this historic bastion in full and festive glory.

The history of Peratallada (“cut stone”) is fuzzy, though the first mention of the castle here was more than 1,000 years ago. Now a protected site – and one of the best-kept examples of a medieval township in all of Spain – this tiny village is comprised of a dense network of ancient streets with two main squares at its core. As we arrived in the late morning outside of the town’s high stone walls and crossed the old moat (now nothing more than a grassy ravine some 4 meters deep), we immediately encountered a plentitude of colorful stalls heaped with artisanal cheeses, honey and bee pollen, myriad handicrafts, plump cured meats and intoxicating, scented oils, all manned by brightly costumed locals excited to kick off the 21st annual Fira Medieval (Medieval Festival) of Peratallada. 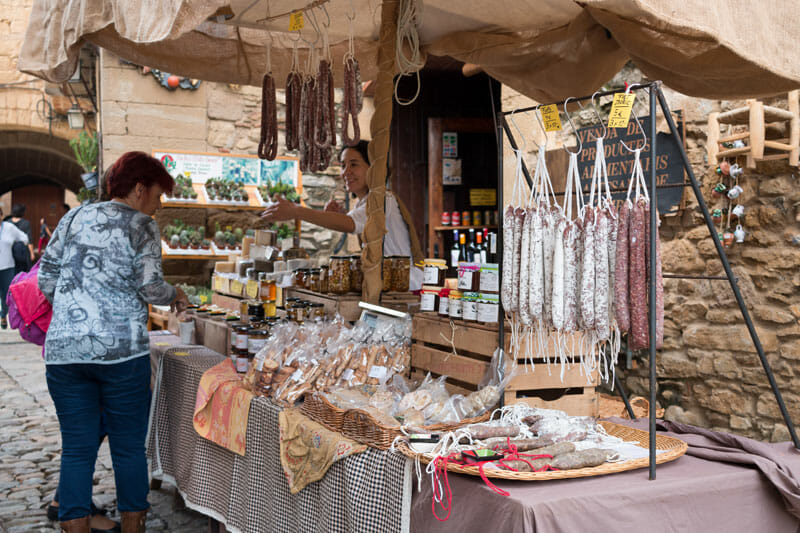 The two-day-long program is packed with enticing events, activities and spectacles, from processions of medieval musicians to theatrical swordplay and falconry. The crowd of families and friends enjoying the sunshine in their tunics and gowns instantly set the festive mood, and we jauntily set off in search of the culinary treasures we had come for – samples of medieval cuisine of the bountiful Baix Empordà region, a fertile plain that has been treasured land since before the time of the Roman Empire.

“Medieval cuisine is essentially food without potatoes, zucchini, beans, tomato, peppers and chocolate,” explained Catalan writer Salvador Garcia-Arbós, a resident of the town of Besalú. All of these ingredients (which are now indispensable to Catalan gastronomy) were unknown to Europe until Christopher Columbus brought them back with him after his journey to the New World. Garcia-Arbós is part of Peratallada+, an organization that was recently formed with the goal of highlighting the medieval character of the town through education and events.

In addition to this delicious and educational little gathering (which was the first action of this relatively new coalition), Peratallada+ also orchestrated a townwide medieval cuisine showcase via the kitchens of the town’s most famous restaurants. Seven establishments in total participated this year, each featuring at least one classic medieval recipe all weekend, treating visitors to delights such as seared duck with pears, leek and goat’s milk soup, vinegar-marinated mackerel, roasted apples stuffed with sausage and spiced wine. We chose to pass a leisurely lunch in the town’s most picturesque plaça at Restaurant Bonay, the oldest restaurant in Peratallada. 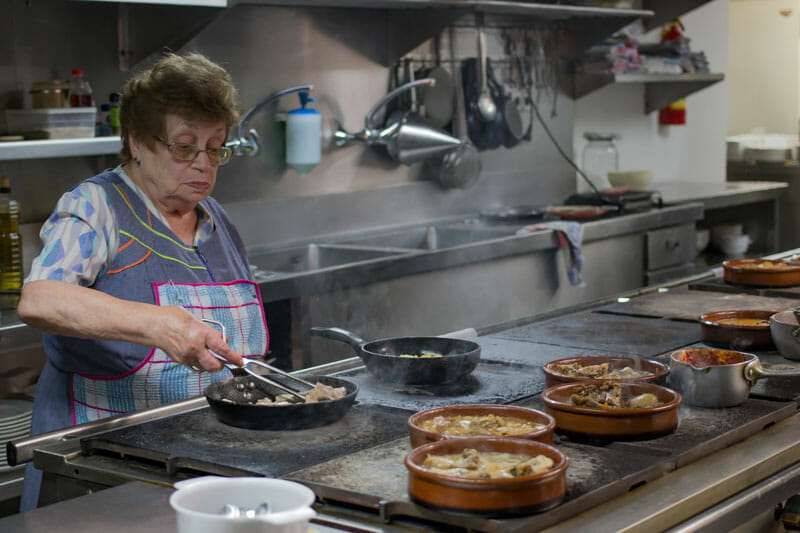 “Nearly everything on the menu is ‘medieval,’” said Enric Fanals i Bonay, the third-generation manager of this beautiful restaurant. “My grandparents opened this restaurant in 1936, and my parents took it over in 1960. My father still runs the bar, my mother cooks, my brother is the head chef and I run the dining room.” Restaurant Bonay appears small from the outside, but venture in and you’ll discover a wine museum of sorts housed below low stone arches, a spacious dining room on the second floor and a vibrant interior garden terrace. Fanals i Bonay invited us into the Bonay kitchen to see where our lunch would be prepared, and we had a front-row seat as his elderly mother, Maria Lluïsa Bonay, cooked up a storm as she has done for over 50 years.

“The Oca amb naps [goose with turnips] is our star dish,” explains Enric. “It has been on the menu since 1936, and it’s what made the restaurant famous.” A big clay crock of fragrant goose legs and turnips, slowly simmered in a thick gravy until luscious and tender, sounded like a splendid meal for a brisk October afternoon, and with its purely medieval constitution, we were sold. The care and craft behind the food at Restaurant Bonay was apparent at first bite, and the wine (an expressive yet brandless Empordà red table wine from just a few dozen kilometers away) complemented the meal perfectly.

Out the window of Restaurant Bonay, we watched as men and women with shiny horns, pointy shoes, tattoos and tunics played medieval drums, woodwinds and bagpipes in the busy Plaça de les Voltes. As their manic rag came to a buzzing crescendo, a comic “crusader” in helmet and cape entered from the wings, pushing a catapult and declaring his intentions to “assault the castle,” to the glee of the crowd. This slapstick game of storming the “castle keep” with foam boulders and a mini catapult is clearly for the children, though a quick look around was enough to prove that adults, too, thoroughly enjoyed the show. We finished our coffees and our excellent apple tart and joined the mob, following the heroic warrior as he pushed valiantly up a steep, cobbled alley towards the Plaça Castell del Perat – the heart of the town and of the day’s festivities.

As the charade unfolded, our attention was grabbed forcefully by the unmistakable seductive smell of grilled meat and the sound of the laughing throngs that lined wooden picnic tables in the far corner of the crowded square. Drinks were passed around freely, and every face was plastered with a wide smile as participants happily enjoyed their own midday feast. Though the proportion of our lunch at Bonay was grand on any scale, we felt that there could yet be room for another taste or two.

For those wishing to forgo a more costly restaurant experience and instead dig into a platter of medieval “barbecue” at long communal tables, members of the Associació Recreativa i Cultural Vulpellac (the ARCV, a culture and recreation association from the nearby town of Vulpellac) set up a cantina of sorts, offering medieval dishes, beer and wine. 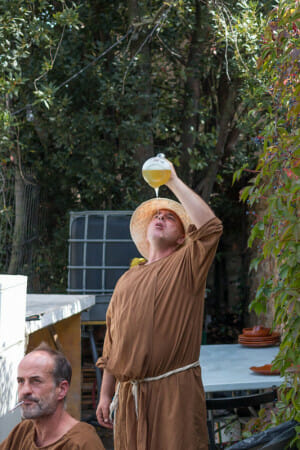 “The ARCV handles the food during the Fira Medieval in Peratallada each year in order to raise money for the Festa Major (town festival) of Vulpellac. We began setting up yesterday,” said Àngel Aznar, a local man dressed as a medieval friar, punctuating his explanation with a long pour of beer mixed with lemon Fanta (known as a clara) from his glass porró – a typical Catalan drinking vessel – held at arm’s length. “We started at 7 a.m. today with beer and entrecotes [rib-eye steaks] for breakfast,” he laughed. “Maybe tomorrow we’ll start with solomillo [tenderloin].”

Àngel and the others, a diverse group spanning at least two generations, were born and raised in the region, and for them, these foods aren’t anything out of the ordinary. “On a regular basis, we have botifarra, pork ribs, sirloin, rib eye and spiced pork skewers from the grill, plus cargols [snails] cooked in the typical fashion with garlic, pickled guindilla chilies and cognac.” Àngel opened up a full-sized home refrigerator in the back of the food prep area and showed us the massive mound of fresh sausages that would be feeding hundreds of people over the course of the festival. Every platter held the ubiquitous pa amb tomaquet, or tomato bread; seques, a side dish of small, buttery white beans sautéed with botifarra negre, or black sausage; and a dollop of authentic allioli – a simple mash of garlic and olive oil so potent that even a spoonful leaves a garlic taste on your tongue for days. Ranging from €8 to €10 per plate, plus €2 for beer or wine, this festival fare is by far the most economic option for lunch in a town known for great food but elevated prices.

Peratallada hosts various festivals and events throughout the year, but none is better or more anxiously awaited than the Fira Medieval. Despite more than 20 years of popularity, the occasion didn’t make the town feel overly crowded, and the opportunities to taste local cheeses, meats, wines and authentic recipes were virtually endless. As you make your way into this time warp of a hamlet, it’s easy to forget the modern world outside and fall in love with the charm that the village exudes, as every corner and lane is meticulously preserved and the stone-walled center offers no cell phone reception. Surrounded by wineries, numerous other towns of medieval importance and some of the Costa Brava’s most beautiful beach coves (in Pals and Begur), Peratallada is a pleasurable and delicious way to spend the weekend, if not temporarily return to medieval times.