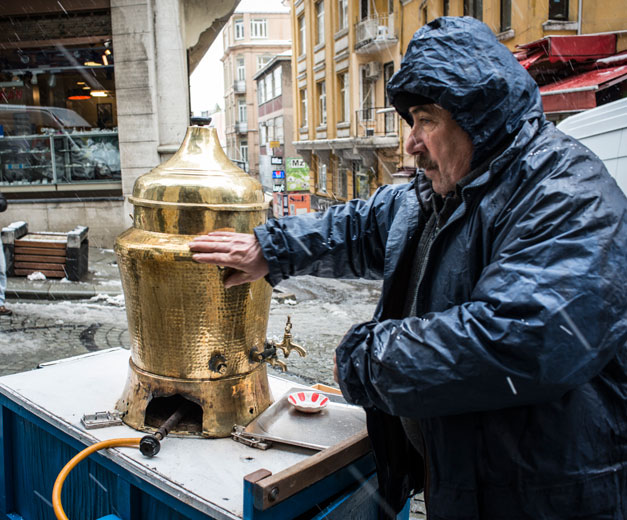 By the name of the place, you’d expect the Sütçüler (“Milkmen” in English) district near Isparta in southern Turkey to be a dairyland paradise, thick on the ground with men carrying buckets sloshing fresh milk, cheese wheels stacked in cool dark sheds, verdant hills freckled with cows. But there are no milkmen in Sütçüler, at least not in the wintertime. The area’s name actually has nothing to do with anything going on in Sütçüler itself.

The mayor of Sütçüler, Hüseyin Müftüoğlu, confirmed this over the phone. “In 1938, the decision was made to name this area Sütçüler. For more than 100 years, in Istanbul, in every neighborhood there’s a milkman and almost surely, that man is from here, one of our Sütçüler brothers,” Müftüoğlu told us.

From a distance, it might seem like these Ispartans are dairymen, providing an important link between city folk and the farms back in the village, but spending some time among those from Sütçüler, we found their most common feature to be their willingness to grind out a living by dragging a pushcart through the streets of Istanbul, winter after winter.

“There are no trades in Sütçüler. Men from Sütçüler used to be milkmen and now they are all salep sellers, nothing else,” said Osman, a taxi driver who himself narrowly escaped the fate of his kinsmen. “My uncles, cousins, everyone in my circle. All of them are salepçi in Istanbul.”

As markets with dairy sections stocked with long-lasting UHT milk have replaced the need for milkmen, the men of Sütçüler are now mostly in the business of selling salep (also spelled sahlep), a hot and gooey, eggnog-like drink sold from pushcarts throughout Turkish cities in the winter months. If you’ve ever heard the bark of a salepçi and seen that bright brass samovar fastened onto a rickety cart turn a corner, then you’ve most likely encountered a man from Sütçüler. 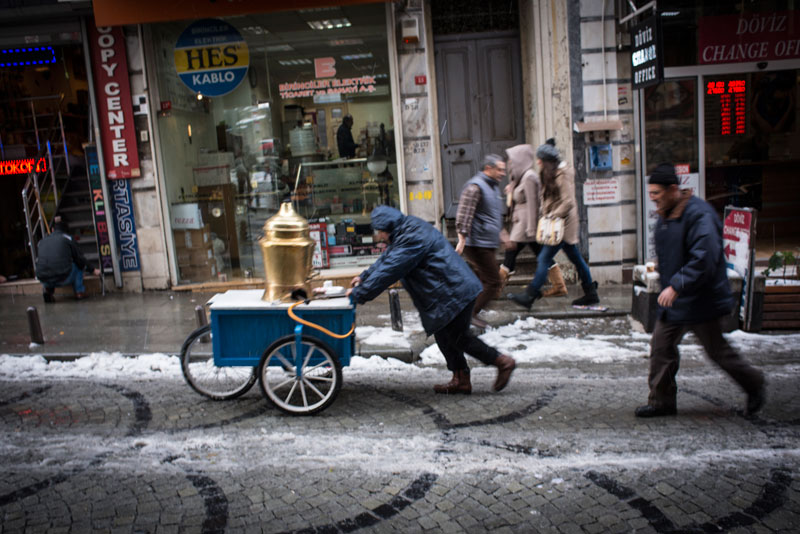 In Beyoğlu, between Tünel and the Galata Bridge, that cup might have come from the hand of Hüseyin Kozak, a Sütçüler native and itinerant salepçi of 37 years. Coming from a long line of salepçi, he was born into the business and speaks of it being handed down by his atalar, or ancestors.

Every year in November, he leaves the village of Bekirağalar in Sütçüler, migrating with scores of his neighbors to the city with hopes of earning enough money to pay down his debts and have a little left over to make it through the summer. In Istanbul, he lives with other salep vendors in a cramped boardinghouse in Kasımpaşa near the parking lot where he chains up his salep cart every night. His son lives in Istanbul now, so he’s not entirely alone, but when we asked him when the season ends, he became joyful: “On March 15th I go back home!”

We were curious about how it was that the people of this rural, remote area took up such a specific line of work in a city 600 kilometers away. Why wouldn’t the men of Sütçüler sell simit or drive school buses? We posed this question to two Sütçüler natives, Osman Uysal, President of ISYOD (Istanbul Milk and Yogurt Vendors Association) and Yalçın Demirtaş, President of SUYAD (Sütçüler Assistance Association).

They rattled off five or six provinces in Anatolia with specific trades associated with them: Artvin – pudding, Maçka – blanket repair, Konya – bulls-eye rifle game, Nevşehir – scrap collectors. The people of Kastamonu, they told us, are well-known hospital orderlies.

Yes, but why salep?

“Most likely, back in Ottoman times, some man came up from Isparta and got a job assisting a milkman in Istanbul – probably a Bulgarian back then. He learned the trade and passed it on to his relatives. So now, we do this work,” said Osman Bey.

He added, “Do you know the word gurbet?”

“Gurbet” refers to a state of exile, being on the road, or away from home, and it is the way of life of many of the 17 million people in Istanbul. Though the seasonal gurbet experienced by Hüseyin Bey is less common than that felt by fully landed economic migrants, the sense of being away from home saturates this city’s identity. 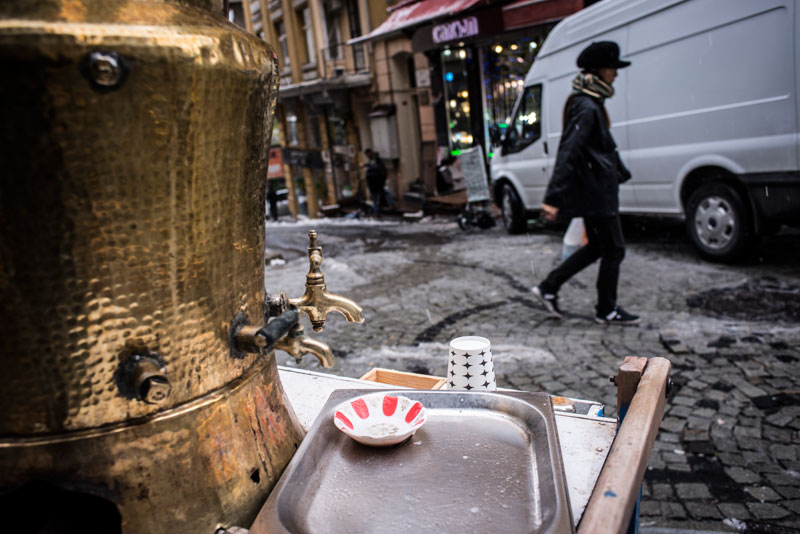 Gurbet plays such a strong role in the social history of Anatolia that a whole category of folk music addresses this limbo state of living between the village and the city. “Gurbet songs express the traumatic disillusionment of a migrant who has left his or her home in search of a better future only to discover that their destination was not what it was cracked up to be,” said Haris Theodoris-Rigas, an Istanbul-based publisher, academic and musician.

Even with the adoption of a specific trade, like selling salep, and the pride in that tradition expressed by the salepçi of Sütçüler, discontent remains close to the surface.

Mehmet, a salepçi from Sütçüler who has been pushing his cart around for 25 years, patted his battered brass samovar, warming his hands on it. “This is my insurance, my retirement, all I’ve got.” He pushed off as we tried to ask him more questions. It was so cold out he was crying.

Hüseyin Bey said, “If I had no troubles, had some money for my family, I’d never return here. Why would I come? Why would I endure this misery?”

Accepting the difficult reality of gurbet, Osman and Yalçın see these street vendors as an important patch in the social fabric of Istanbul that deserves their support. They giddily swapped street vendor sightings like seasoned bird watchers.

In Nişantaşı, one of Istanbul’s tonier neighborhoods, Osman Bey said he was on his way to visit a sick friend in the hospital when he came across something that surprised even him: a yogurt vendor still using the omuzdan, a long curved stick slung across one shoulder on which two big containers of yogurt are balanced. “In fancy Nişantaşı!” he exclaimed. “He said he has some old customers there who won’t let him quit.”

Looking at a photo featured in one of our previous salep stories, Osman said, “Yes, Bekir Amca, he is from the village of Sarımehmetler. He used to wear white sleeves and a white hat. He had a very fine salep cart. Very original! The cops confiscated it.”

It was less nostalgia than a sense of urgency that colored this conversation. Aside from a small group of officially recognized street foods (simit, boiled corn on the cob, roasted chestnuts) sold by tightly controlled vendors, it is illegal to move around selling foodstuffs in Istanbul. Salepçi, sütçü, pilavcı, yoğurtçu, balıkçı, ciğerci, şalgamcı, tatlıcı, sebzeci (vendors of salep, milk, rice pilaf, yogurt, fish, liver, pickled turnip juice, sweets and vegetables, respectively) – all outlaws. “The municipality has no respect for this culture. In fact, they are working to annihilate it,” said Osman Bey. Without the backing of the municipality he thinks the end of the road has come for the migratory salep vendors of Sütçüler whom he’s worked so hard to protect and support.

Illegal or not, Osman and Yalçın actively support their Sütçüler constituents. When someone’s salep cart gets confiscated, they work their contacts to get it back on the street. When a boza seller gets laid up with pneumonia, they visit him in the hospital. Osman even filed an official communiqué pressing the municipality to recognize salep as a “traditional Ottoman craft,” thus lifting the embargo on its sale on the street. They did not even respond, he told us.

Istanbul | By Istanbul Eats
By Istanbul Eats
Istanbul -- By the name of the place, you’d expect the Sütçüler (“Milkmen” in English) district near Isparta in southern Turkey to be a dairyland paradise, thick on the ground with men carrying buckets sloshing fresh milk, cheese wheels stacked in cool dark sheds, verdant hills freckled with cows. But there are no milkmen in Sütçüler, at… 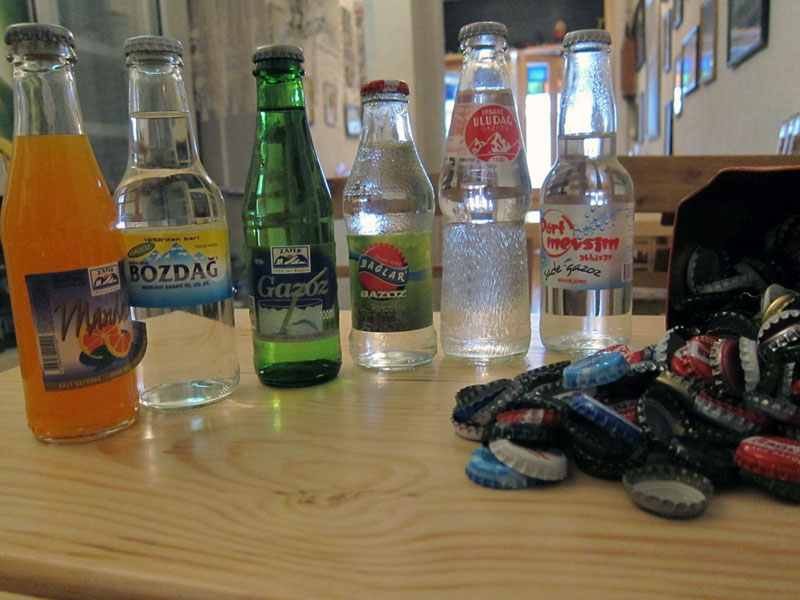 Istanbul | By Istanbul Eats
By Istanbul Eats
Istanbul -- In a 2003 TV commercial for Cola Turka, the actor Chevy Chase was seen speaking Turkish and then sporting a moustache, after taking just one sip of the intended challenger of Coke in this country. This sensational ad – which riffed on the old theme of American cultural imperialism through its number-one agent,… 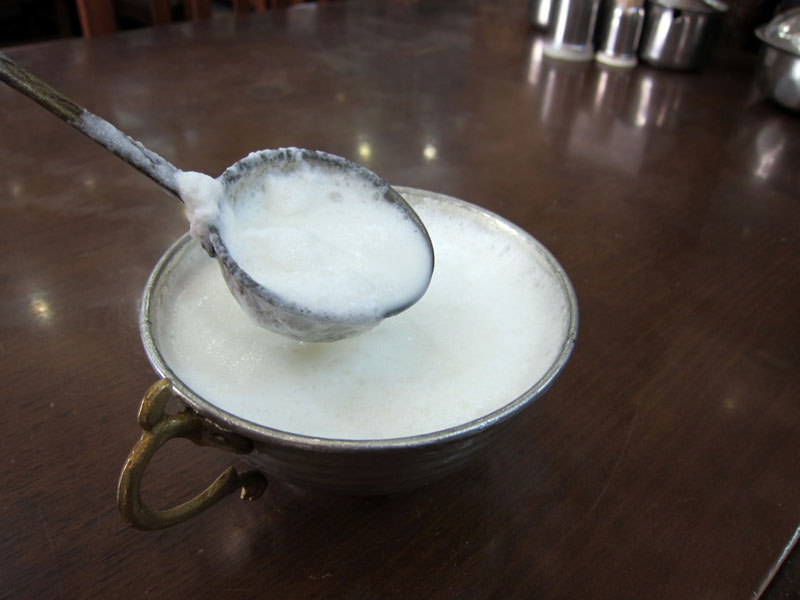 Istanbul | By Istanbul Eats
By Istanbul Eats
Istanbul -- Editor’s note: While the fate of the Gezi Park occupation is being hotly discussed, we’ve been spending our time sipping deeper into Turkey’s other great debate: what is the country’s national drink? In the spirit of national reconciliation, here is our report. The recent protests that raged across Turkey may have been sparked…