In Spain, preserving the rituals of Lent – historically a period of 40 days of prayer, penance and pious abstinence from eating meat that leads up to Easter – was up until the second half of the 20th century mostly the responsibility of priests. Nowadays, however, it is more often the country’s chefs who are shaping the observance of Lent, by both maintaining and updating its delicious culinary traditions, which are still very much a part of Spain’s contemporary food culture.

Each country where Lent was customarily practiced has its own special dishes in which meat is replaced with other protein-rich ingredients in order to fill the stomach. In Spain, the “king” of Lenten cuisine is cod (bacalao), introduced in the 16th century by Basque fishermen who had begun to catch it off the faraway coast of Newfoundland. Easy to preserve in salt and, at one time, cheap and abundant, this versatile, tasty fish was originally a food for poor people, even those far inland. For centuries, when everyone in Spain was more or less required by the Catholic Church to observe the Lenten abstinence from meat, only people with money could afford to buy the Papal dispensation to avoid this requirement, so the smell of a dish of cod was a clear sign of a humble home. Despite this class association, cod has gradually become more and more popular in Spanish cooking, and not only during Lent. 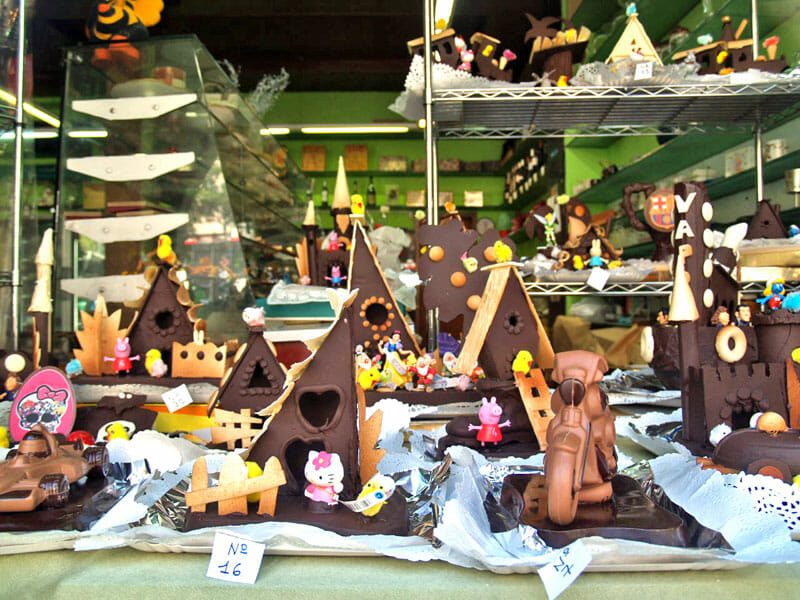 Traditional Catalan preparations of cod include the classical esqueixada, a rustic vegetable salad made with dried, salted cod that is torn into pieces (the name of the dish comes from the Catalan verb “to tear”). These days, however, cod is prepared in Catalonia in more elaborate ways. For example, on the menu at Clandestino – one of the restaurants on Barcelona’s “Ruta del Bacallà,” a gastronomic route organized for the first time this year during the several weeks leading up to Easter – is an appealing dish described as “confit of cod with vanilla, smoked eggplant, saffron pil-pil and kefir perfume.” Aimed at bringing customers to restaurants and shops selling this Catalan staple, the “Cod Route” was set up by the Gremi de Bacallaners, a local union of salt cod purveyors. These tradesmen – who select salted cod of very high quality, carefully debone and butcher it so no part is wasted, and then soak the cod to reconstitute it and remove the salt – are part of an old and unique profession in Catalonia. In their shops, which are usually located in or around markets, they also sell other pesca salada – cured, smoked or salted fish such as anchovies or sardines.

An excellent version of the traditional “Lent cod” recipe is offered at La Estrella, a restaurant in the Port Vell located near the Estació de França railway station. The venue was opened in 1924 by Josefa Chiquillo, great-grandmother of the current owner, Jordi. La Estrella’s menu always features a number of cod dishes, but its Lenten cod, a kind of stew known throughout Spain as bacalao de Cuaresma, is something else. The dish is based on the same classic recipe as all Lenten cod: artichokes, some chickpeas, hard-boiled egg and the cod, stewed with olive oil, onion, garlic, crushed tomatoes and a pinch of paprika or saffron. But while bacalao de Cuaresma is typically made with the penca, a rather dry section cut from the cod’s tail, Jordi instead uses the morro, a better cut of the fish that is extremely tender and juicy. The generous portion of cod is served with just a few chickpeas and pieces of artichoke and covered with the stew. In La Estrella’s version, what was once a strong-tasting dish becomes subtle and even delicate.

Buñuelos de viento, or “wind fritters,” are another delectable Lenten food that is still enjoyed in Catalonia. These small, round, airy pastries, introduced in the Middle Ages by Sephardic Jews, consist of balls of dough made with wheat flour, egg, butter and some anise drops, which are fried in hot oil and dusted with sugar. In Catalonia, they are sold in many pastry shops from the first day of Lent until Easter Sunday under the name buñuelos de Cuaresma, or “Lent fritters.” Some places offer buñuelos del Empordà (or brunyols de l’Empordà in Catalan), a local variation from Girona in northern Catalonia made with a denser, more brioche-like dough that includes eggs, milk, lemon and anise, which imparts a delicate, fragrant flavor. 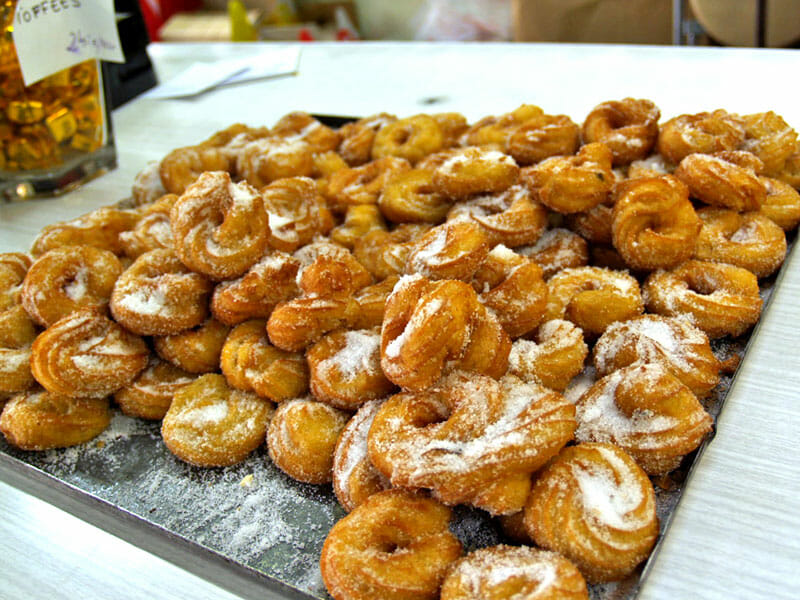 Another Lent specialty of which we are very fond is the mona de Pascua, a dessert with a number of different variations. This sweet, whose name is thought to be derived from a Medieval Arabic word, munna, meaning “provision for the mouth,” was traditionally given by Moorish servants to their master. Over time and due to the influence of Catholicism, it evolved into a present given by godparents to their godchildren on Easter Sunday. These round cakes were typically decorated with the same number of hard-boiled eggs as the age of the child. Over the last century, the cakes have become more complex, and chocolate eggs are often substituted for the hard-boiled eggs.

Patisseria La Colmena, a classic pastry shop from 1835 housed in a beautiful Modernist building in Gràcia, is one of our favorite places to buy Easter-time sweets. The bakery not only makes both types of buñuelos but also wonderful monas de Pascua, ranging from the old-fashioned style of the cake topped with hard-boiled eggs to those with chocolate eggs or elaborate chocolate formations. Another typical Catalan Easter pastry here is the crocant, a crunchy sculpture of almond and sugar brittle that is sometimes made in the shape of a house.

These days, monas de Pascua made entirely of chocolate are the most popular among children. These wonderful sculptures of houses and castles, often decorated with figurines of Disney princesses or Barça football players, are displayed in the windows of Catalonian patisseries until the glorious day when godparents will give it to their godchildren. This day is known as Pascua Florida, the “Feast of Flowers,” the first day after Lent, which opens the door to spring, the sun, meat, eggs and a new season of guilt-free food.

This article was originally published on March 29, 2013.

Add to favorites
Lenten and Easter Foods in Barcelona