On June 20, Georgian Prime Minister Mamuka Bakhtadze signed a decree abolishing the Writer’s House of Georgia, Tbilisi’s leading institution of literary culture and the home of Cafe Littera, the restaurant that gave birth to the culinary revolution Georgia is currently going through. As soon as the ink was dry, the Writer’s House accounts were frozen and its directors were suddenly dismissed with only half a month’s salary. The fate of Cafe Littera is unknown.

The story of the Writer’s House goes back to 1905, when philanthropist and father of Georgian brandy, David Sarajishvili, completed construction of an Art Nouveau masterpiece of a house to commemorate his 25th wedding anniversary to Ekaterine Porakishvili. After their deaths, the home was auctioned off in 1918 to oil tycoon, philanthropist and committed Menshevik, Akaki Khoshtaria, who fled to Paris when the Bolsheviks invaded Georgia in 1921. The state turned the home into The Writer’s Union two years later. John Steinbeck wrote of his visit there in 1947 in his book, Russian Journal.

In October 2008, the Writer’s Union became the Writer’s House, administered by the Georgian culture ministry. When Natasha (Nata) Lomouri arrived three years later as director, the house was a wreck. Broken banisters, missing stairs, torn up hardwood floors, moldy plaster walls, a garden of weeds – and about a dozen dusty old writers – were the legacy 70 years of communism and nearly 20 years of independence had left behind. With a laughable budget and virtually no support, Nata and her team began to rebuild the old Sarajishvili mansion, piece by piece. It opened with a few restored rooms in 2013. 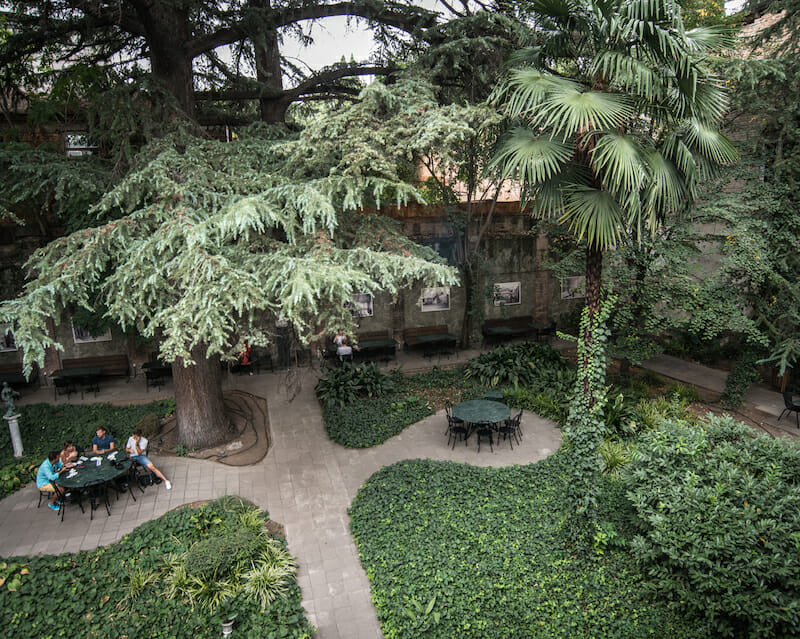 At the time, Nata and her friend Tekuna Gachecheladze – a rising star in Tbilisi’s slowly awakening post-Soviet culinary scene – discussed the idea of opening a restaurant in the Sarajishvili garden, a lush, beguiling, private courtyard dominated by a giant pine tree. Tekuna was stoked with new culinary ideas she had been experimenting with at her cooking school and “laboratory,” Culinarium, and she was eager to unleash these on the public. The Writer’s House was the perfect venue for their shared vision.

“We joke that we are two crazy women, the ideological granddaughters of Sarajishvili, carrying on his legacy,” Tekuna remarks with a deep chuckle.

David Sarajishvili and Ekaterine Porakishvili were a modern Georgian couple who had embraced the progressive trends of Europe and the national awakening that was happening in Georgia under Russian rule – a kind of “cultural fusion.” They worked closely with leader of the Georgian national movement, poet, writer and publisher, Ilia Chavchavadze, while their home hosted gatherings and exhibitions by the most notable artists of the day, including poet Akaki Tsereteli, actor Valerian Gunia and painter Gigo Gabashvili. Naturally, such events were followed by a supra, or feast.

“I can’t imagine not having this,” Tekuna says. “This house has an aura.”

“Sarajishvili had a French chef bringing culinary culture to Tbilisi,” Tekuna says. Tekuna herself was already a star chef when she opened Cafe Littera in 2014. She had catered special dinners for visiting dignitaries invited by President Mikheil Saakashvili and had a popular cooking show on TV. But Cafe Littera was a game changer. Her innovations, like fried elargi balls, trout tartare with jonjoli, and mussels chakapuli challenged the long-established concept of Georgian cuisine. Traditional fare is great, but Tekuna made Georgian food sexy. Cafe Littera has inspired a new generation to pursue culinary careers. It has also branded the Writer’s House.

“Littera surprised my expectations,” Nata says. “We really go hand-in-hand. All the newspapers and magazines that come to interview Tekuna write about David Sarajishvili, too. People eat, drink and learn about the house.”

Between renovations, Nata and her co-director Dea Metreveli have had their calendar packed with book presentations, fairs, literature festivals, exhibitions, music recitals, poetry readings and diplomatic engagements, which Tekuna often caters. Esteemed guests have included former NATO Secretary-General Anders Fogh Rasmussen, former US Defense Secretary Donald Rumsfeld, US Vice President Mike Pence, and writers Orhan Pamuk, Boris Akunin, Svetlana Alexievich, to name but a few. In 2017, Nata renovated the third floor and established a writer’s residency. She was in the process of creating a Sarajishvili museum this summer, but was fired the same day she secured funding from the private sector, and her project was snuffed. At the same time, Georgian authorities announced that the Writer’s House would be merged with the Georgian National Book Center to create a new entity called the National Foundation of Georgian Literature. 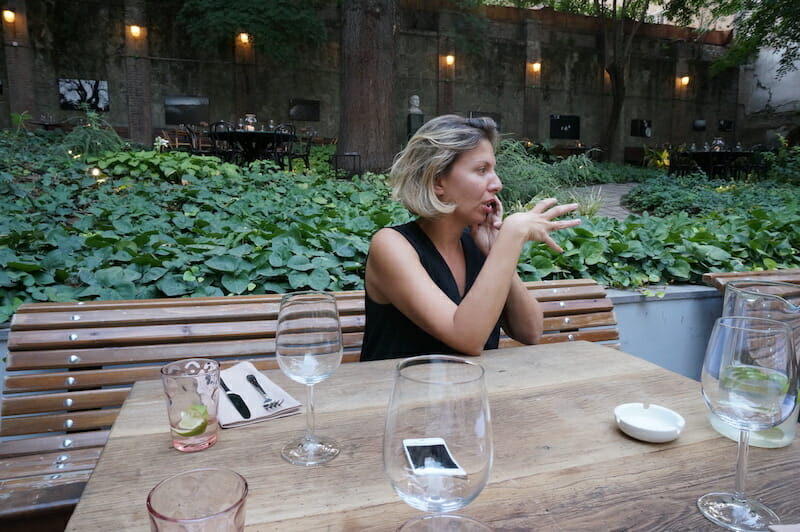 “There were no explanations or consultations about the merger – no transparency. They [culture ministry] replaced me with another director and said I could work in a lesser capacity for half the salary. I said I wanted to stay to finish two projects, then they told me there were no positions available because I was overqualified,” Nata states.

Levan Kharatishvili, deputy minister of the Ministry of Culture and Monuments Protection of Georgia, states that the intentions of the merger were announced at a meeting in January although the details of the merger are only being discussed now, which he affirms “is completely normal.”

Nata and Dea started an online petition to save the Writer’s House, insisting consultations are held on the reorganization with all who have vested interests in its future, including literary professionals. They also demand the opportunity to continue their work. Their social campaign is supported by the country’s leading writers, translators and publishers who are boycotting the new organization. At a June 28 meeting to discuss the merger, some compared it to the Soviet method of monopolizing authority over institutions.

Tekuna says the restaurant has an annual contract, a detail she had never worried about until now. Moreover, she says, the arrangement can be annulled at any time without a reason. She fears that she may have to compete in a tender, which inevitably goes to the lowest bidder. “The Sarajishvili garden could be a khinkali and khachapuri restaurant next year,” she adds.

Mr. Kharatishvili says Tekuna has nothing to fear; the new management has no intentions of changing the restaurant. But this the same ministry that removed the protected status of the archeological site of the world’s oldest gold mine and gave the land to a mining company. There are trust issues at stake.

“I can’t imagine not having this,” Tekuna says. “This house has an aura. The people in the ministry, in their offices, they don’t understand this place. They don’t have this pride.” 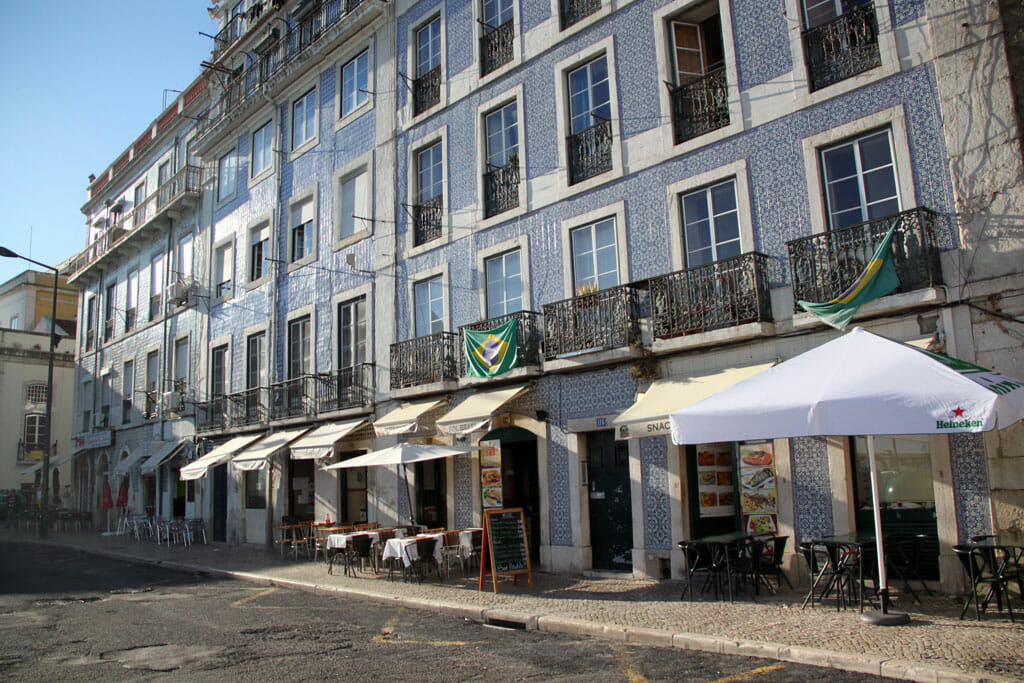