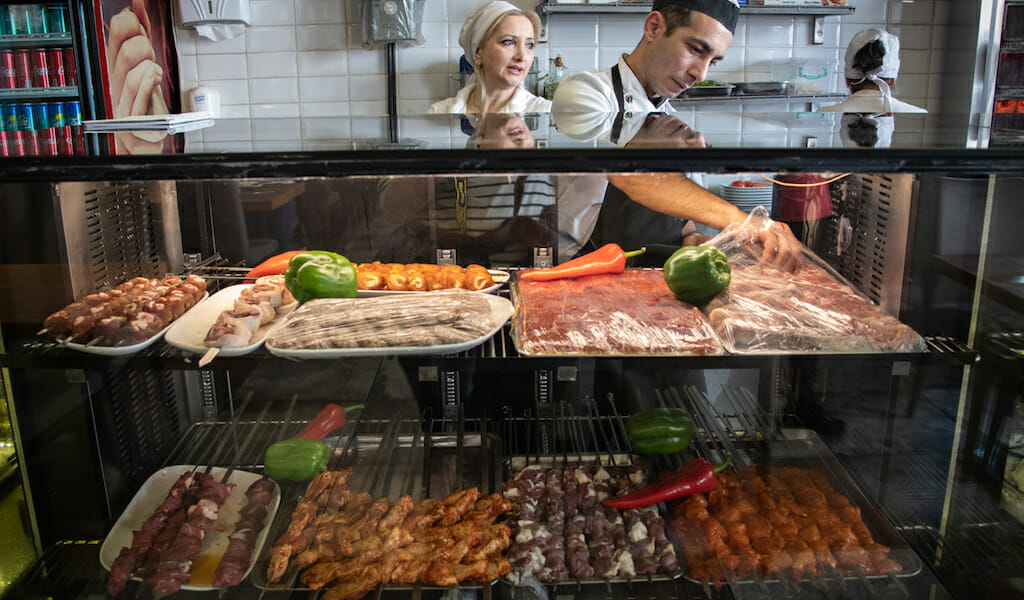 We were living in an urban cave: a dark, cramped, one-room ground-floor apartment next to the Marjanishvili Theater in Plekhanov. At 60 bucks a month we could hardly complain – after all, there were greater things to grumble about. The year was 2002, and electricity was a capricious luxury that always seemed to go off the moment you came home only to come back on the moment you went to bed. And there were the cops, whose sole duty was to extort money from people.

Occasionally, we would even gripe about dinner. “Georgian, again?” There were several greasyspoons along Aghmashenebeli, our main drag, which was often buried under a bone-rattling cacophony of gasoline-powered generators. The menus were all the same, so we would go to one place for their shkmeruli, another for ostri and the famed El Depo for khinkali. They were fine, but we missed variety.

Nevertheless, we were actually quite lucky; not because we had McDonald’s a block away for those special hangovers, but because Aghmashenebeli was one place in Tbilisi that provided us with a taste of Turkey. There were very few other international cuisines in the city at this time. 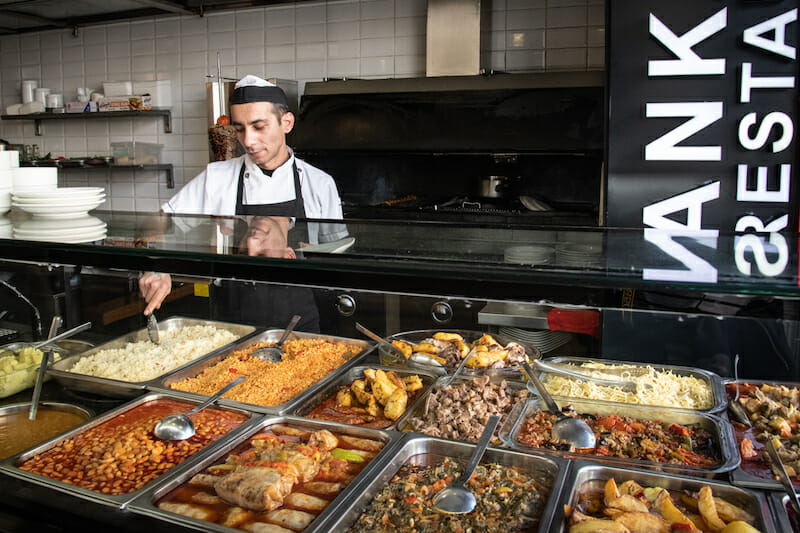 We gravitated to a place called Ankara. It was sparkling clean, a sharp contrast to the Georgian dives we were accustomed to, and the staff were pleasant and professional, which was also uncommon. Moreover, the food was quite appetizing and reasonably priced.

In 2004, the city began to “clean up” the area around Marjanishvili metro, which was like a sidewalk bazaar that spilled into the streets. People laid out blankets and sold everything from old books to wooden utensils and second-hand clothes. Jalopies offered village produce or cheese from their trunks. Rickety kiosks tacked into alleys sold magazines, vodka and black market cigarettes – they all began to disappear.

Our favorite Georgian restaurants started vanishing, too. The tax police shuttered El Depo, our spot for ostri became a shoe store and Sachashnike, our beloved shkmeruli joint, just kind of faded into a backdrop of storefront discount fashion shops.

We had since moved across the river and settled into a routine that kept us out of Plekhanov, for the most part. Chinese and Italian restaurants opened up for diversion, but whenever we had a hankering for Turkish food, we always counted on Ankara to dish out salacious karnıyarık, fiendish kuru fasulye and obese lahana sarması. In fact, their khashlama soup fortified our daughter throughout her mother’s pregnancy. 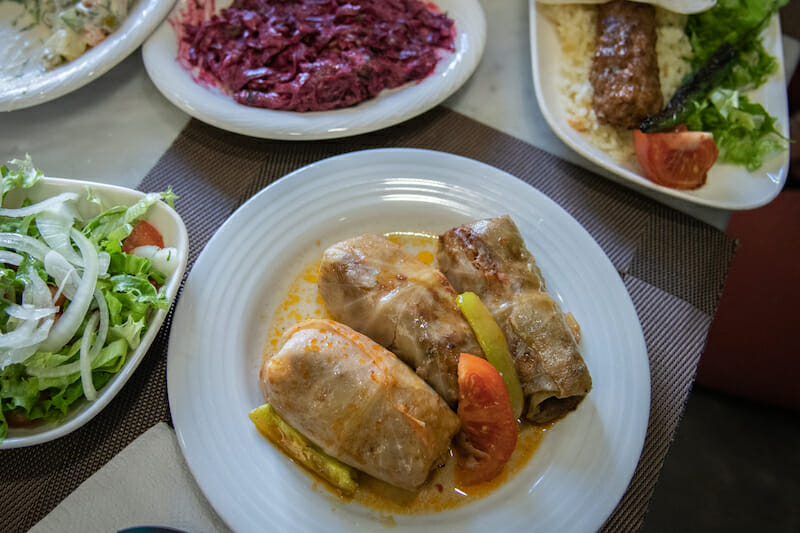 “This used to be a Georgian cafe,” Yusuf Tosunoglu tells us over a cup of tea. Behind him a flatscreen on the wall shows a news broadcast from Turkey. “My father would come and meet me here once a month while I was going to school,” he says, indicating the restaurant with a wave of his hand.

Yusuf came to Tbilisi in 1995 from his native Hopa with a dream of being a pharmacist, like his grandfather. When he learned it would be eight years of schooling, he switched his major to journalism and got his diploma five years later. But it was not a lucrative career choice.

“One day my father called me and said, ‘I bought the café for you,’” Yusuf recounts.

Yusuf admits he wasn’t thrilled to be a restaurant owner at first. He felt ashamed to take money from friends for serving them food. But the business, Aghmashenebeli’s first Turkish restaurant, took off and inspired others to open in its wake.

Aghmashenebeli’s first Turkish restaurant took off and inspired others to open in its wake.

Georgian restaurants might not technically fall into the “slow food” category, but the dining experience is certainly a most unhurried affair. The Turkish style, on the other hand, with döner, kebabs and steam table fare, is perfectly suited for quick turnover lunches. Ankara’s clients are mostly Georgian and Turkish businessmen.

In 2011, City Hall started a massive Aghmashenebeli urban renewal project. They ripped up all the towering Eucalyptus trees and broken sidewalks, resurfaced the facades of all the old buildings and laid cobblestones in portions of the street. Georgia’s President boasted they made the street look “like Paris.”

A liberal visa regime and daily direct flights from several Middle Eastern cities have attracted Persian and Arab tourists in recent years, many of whom are drawn to Aghmashenebeli and its halal food. We now have Syrian, Yemeni and Iranian establishments along the street, which rankles intolerant locals who forget that Tbilisi’s history is one of a multi-ethnic, multi-denominational melting pot. In July 2017, a group of far-right nationalists marched down Aghmashenebeli shouting racist, anti-Muslim drivel. 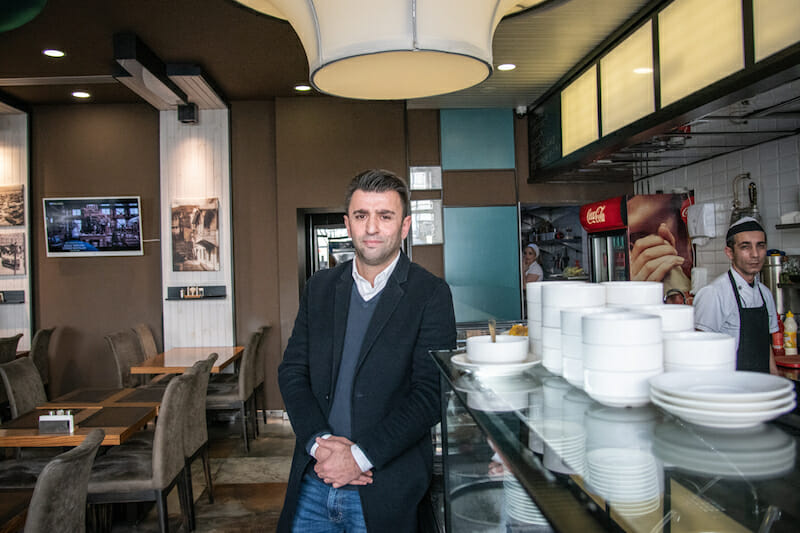 Yusuf, who is married to a Georgian, says he has “never for one minute felt like foreigner” here. Tourism is a reality and Middle Easterners are part of that package. However, he confesses that Arabs tend to holiday in large family groups and that things “can get loud and messy,” which keeps regulars away during the summer. “But my Georgians come back in the winter,” he adds with a gentle grin.

We recall when Yusuf would alternate between the cash register and a table of regulars hanging out over cigarettes and cups of tea. Today, this man who used to squirt lemony kolonya into our hands after we paid the bill owns a sister restaurant down the street called Ankara Style as well as a corporate catering business that employs some 200 people. “Azeri, Armenian, Georgian, Turks – they all work together,” he affirms.

It takes an intelligent, compassionate person to maintain a proficient staff. Many of Ankara’s waitpersons and cooks have been here for years. Tea, a chocolate-eyed Georgian beauty has been floating across the floor from the very beginning and even remembers when Yusuf was a student, sitting by the window with his father. The food is wonderful, but it wouldn’t be so delicious without Tea here. The moment she notices us, she never fails to radiate a wide, welcoming smile and ask, “How is your khashlama daughter!?” 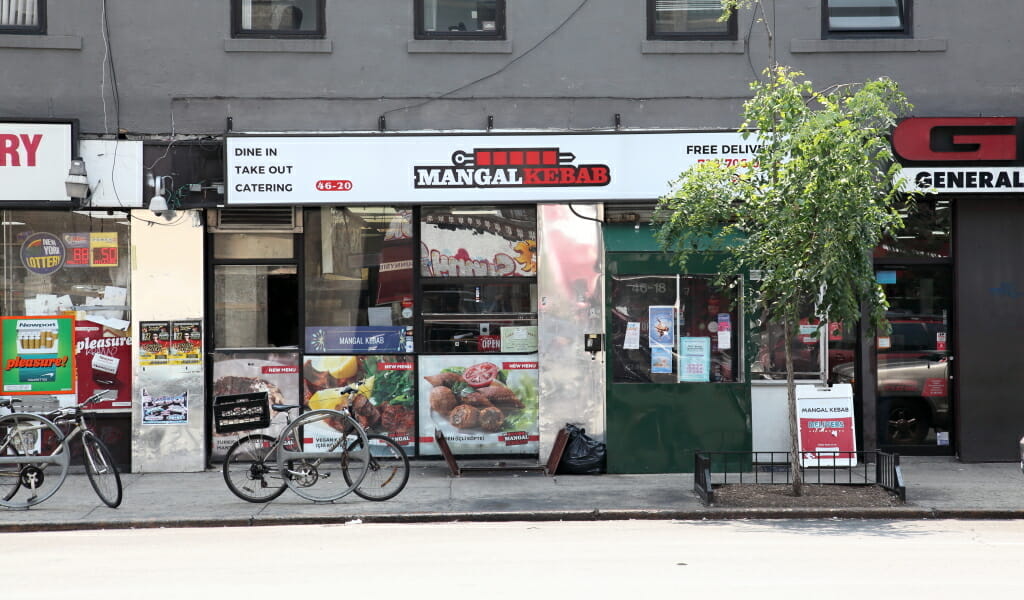 Queens | By Dave Cook
By Dave Cook
QueensWe counted ourselves among the cogniscenti on our first visit to Mangal Kebab, a decade ago, when we passed up pizza in favor of pide (Pea-day). Sharing the same section of the menu and baked in the same oven, but elongated rather than round, the Turkish flatbread suggested a well-laden canoe, until it was sliced…