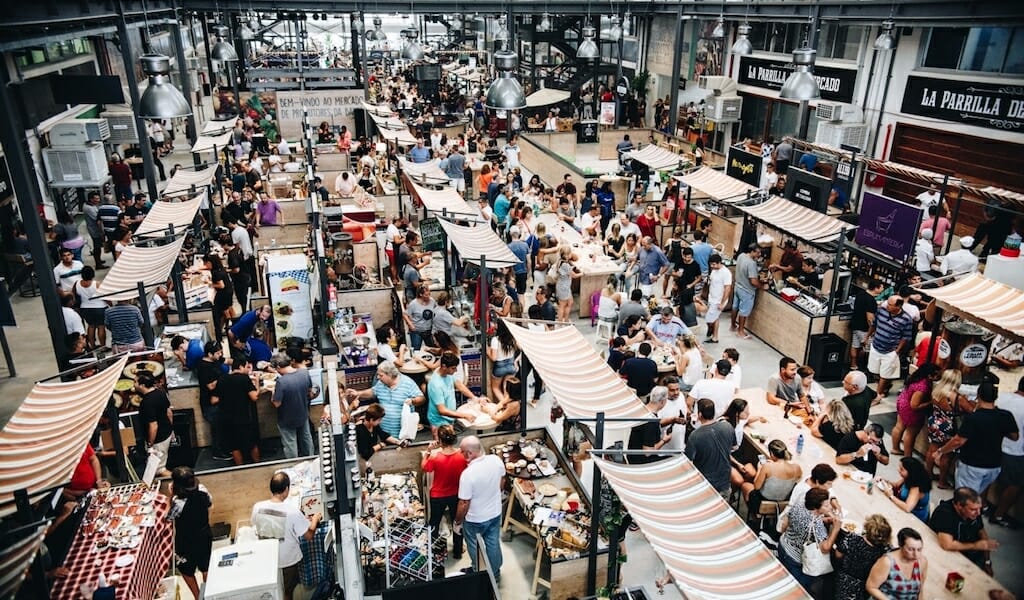 Twenty years ago, Rio de Janeiro was teeming with food markets: big indoor venues full of stalls where people could go to buy groceries, fresh meat and produce, but also stay for a while to have a drink or two, maybe some appetizers, or even sit down for a meal.

As time went by cariocas spent less time in these markets, instead shopping in grocery stores and eating at restaurants; the markets continued to limp forward only because of some strong-willed and stubborn merchants who refused to shut down their businesses.

But this all began to change two years ago. Recognizing the burgeoning foodie culture and cariocas’ interest in food that went beyond the traditional local favorites, vendors slowly started to change course and cater to these new tastes. As a result, these small business owners tweaked and rebranded their shops, transforming them from regular stands selling groceries and farm products into charming food stalls offering fresh organic produce, artisanal beers, good wine, special cheeses and above-average Brazilian and international food products. 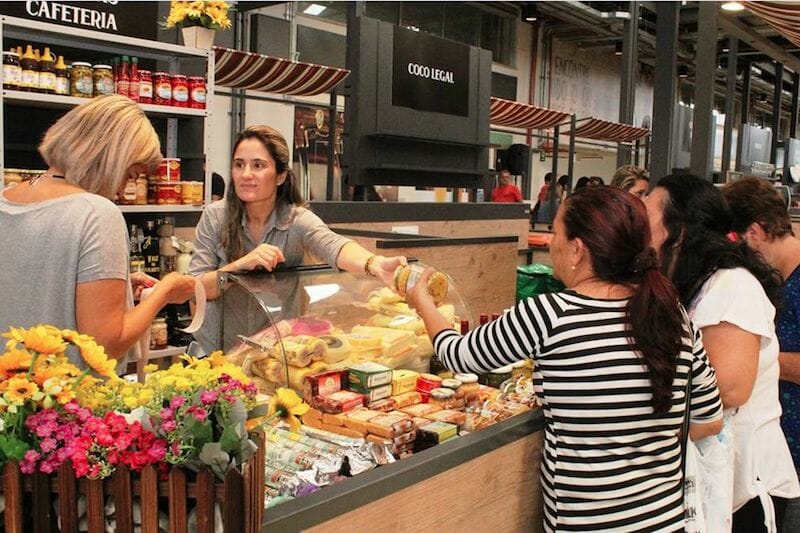 The strategy has worked: now some of most traditional food markets in Rio, like Cobal in Botafogo and Cadeg in Benfica, are back in business and doing very well. It has also led to the launch of Mercado de Produtores Uptown (the Uptown Farmers Market), the first market-food hall of its kind in Rio.

Located inside a massive shopping mall called Uptown in the West Zone of the city, Mercado de Produtores takes its inspiration from Lisbon’s Time Out Market. The enormous food hall – the venue is 6,500 square meters in size and is home to more than 50 food stores and stalls – was opened in March 2017 as part of a real estate venture led by businessman Schalom Grimberg. One of the biggest real estate developers in the city, Grimberg has invested heavily in Rio’s West Zone.

Unlike its Portuguese counterpart, which is located in the heart of Lisbon’s downtown, Mercado de Produtores is far from Rio’s historic center, making it less vulnerable to the charge that it is displacing more traditional shops and vendors. Situated instead on the edge of Barra da Tijuca, a relatively new neighborhood that is perhaps best known for its large condo buildings, gated communities and access to green space, the food hall caters to the middle-class and affluent residents of this area.

“It’s impossible not to be excited by the potential this place has to become the number one food attraction in Rio.”

Considering the recent rise in crime in Rio and Brazil’s general sense of economic and political instability, it’s not surprising that the enclosed market is doing well. “One of the reasons [we’ve been so successful] is that the market offers security and comfort. We are like a safe little city inside Rio,” says Mr. Grimberg. “In these hard times we are living in, where traditional street stores are suffering from the increase in urban violence, a place like our market is a really attractive option.” Not only does it offer many of Rio’s most popular food items, but it does so in an environment that resembles an endless party, music included (sometimes even live shows), seven days a week.

But more than that, Mercado de Produtores offers a wide range of cuisines from outside of Brazil. It has everything, from Peruvian to Middle Eastern food. “This gathering of diverse food and great cooks helps to give the place an atmosphere of joy and happiness that only good food can provide. The excellent local beers, cheeses, sausages of small artisanal production, and most importantly the cultural diversity – all of this turns the market into an authentic foodie’s Disneyland,” says Pedro Landim, a famous food critic in Rio. 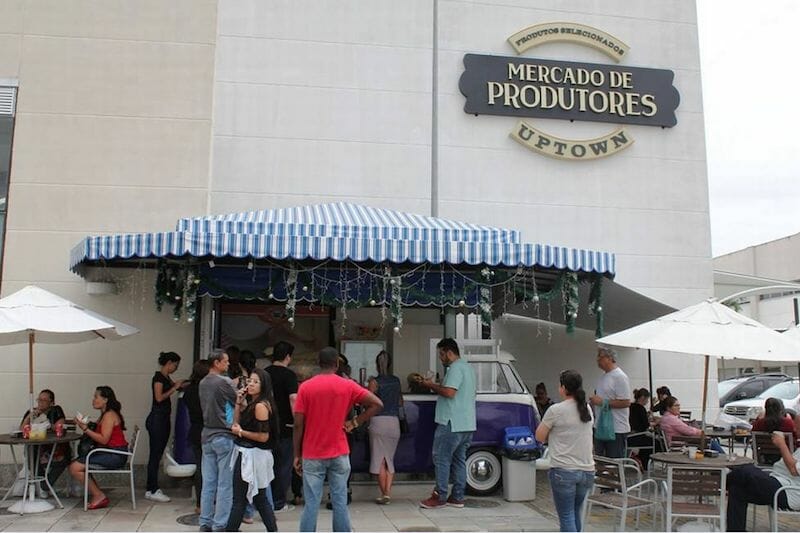 The comparison makes sense, but we think the food hall is more akin to Epcot, a theme park at Disney that recreates a world’s fair – you can travel around the world in a day. Starting in the morning, it’s possible to taste Argentinean empanadas from La Empanadera, followed by some fresh Peruvian dishes at Ceviche da Fabi. After that you can swill some artisanal beers made in house at Tio Ruy Brewery (it’s never too early for a beer, in our opinion). Once you’ve had enough of their delicious brews, you can choose between a big Spanish seafood lunch at La Plancha, one of the few large restaurants in the market, or some barbecued pork ribs made by Espírito de Porco, a tiny food stall dedicated to all things porcine.

The market could easily be a soulless place, but the vendors are what give it its heart. The majority of the stalls are small family businesses that focus on high-quality products. Places like Delicias da Canastra, a spot dedicated to selling the best Brazilian cheeses (which come from the Canastra Mountains, hence the name). The stall offers hundreds of products that can be taken home or tasted right there. Every week, they offer special tastings, pairing the cheeses with wine and beer. And very often the beer comes from Tio Ruy, which is only a few steps away.

Or take Diogo Teixeira, a carioca businessman who has long had a passion for cured meat. Five years ago, Diogo bought an oven and started to make his own cured meat at home. Then, a friend of his who runs a bar started buying products from him. Now he has his own stall at the market and has just opened a second shop, in another part of town. 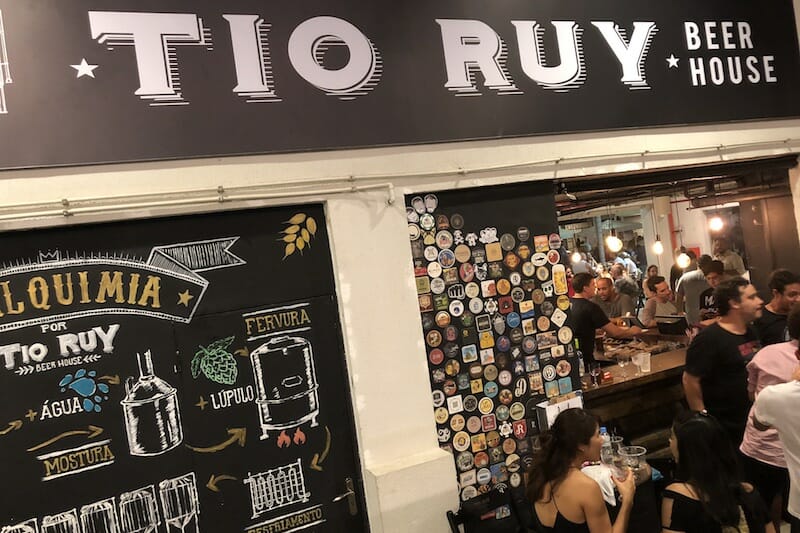 This isn’t an isolated example. We spoke to Fabiana Ciraudo, owner of Ceviche da Fabi, a stall that sells fresh raw fish made in the Peruvian way. Fabiana is a psychologist who used to prepare ceviches for family parties. She was one of the first vendors to start operating in the market, and is one of its most active merchants.

“This market is just over one year old, and it still has a lot of growing to do. But it’s impossible not to be excited by the potential this place has to become the number one food attraction in Rio. We are working hard for this,” says Fabiana as she prepares, along with her husband Marcelo, ceviche for a long line of customers. The hard work appears to be paying off.

The market is open all day, seven days a week. The best and safest option to get there is to take the Metro (Line 4) until Barra da Tijuca (“Jardim Oceânico Station”), and then take a US$10 taxi ride straight there. 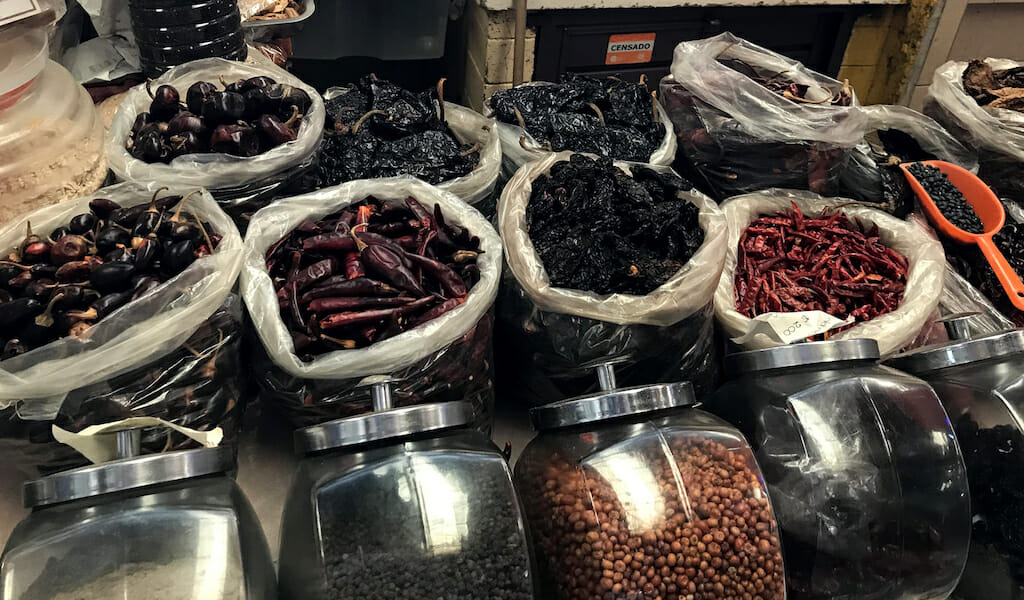