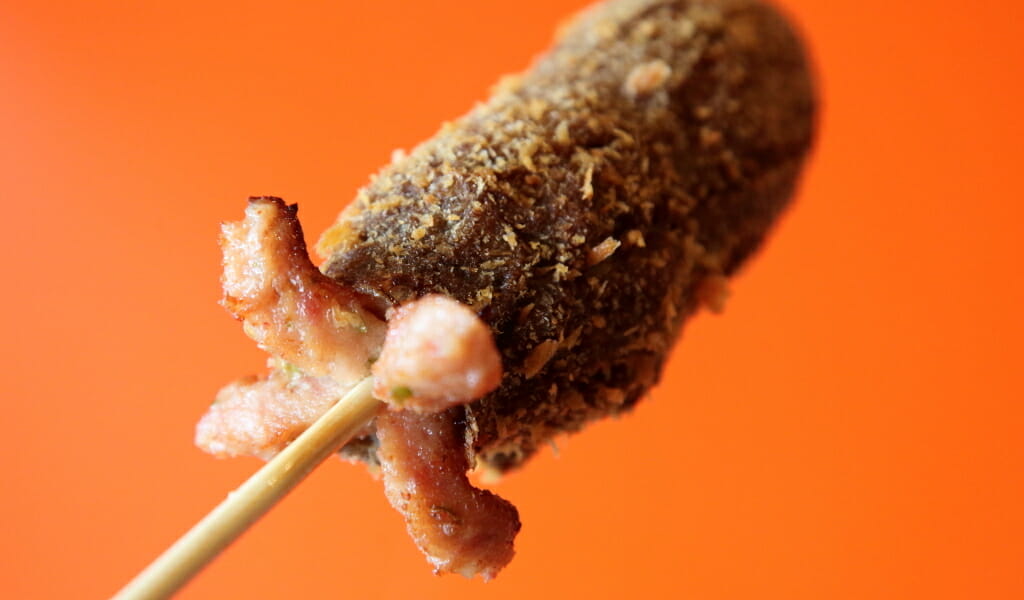 Just to the east of Flushing, the home of New York City’s largest and fastest-changing Chinatown, is a sprawling neighborhood that boasts many of the city’s most interesting Korean restaurants and food shops.

We hesitate to call it a Koreatown. Compared with the few dense blocks of Manhattan’s Koreatown, this part of Queens has a more open feel, with modest buildings, wider streets and more sunlight. Here, in the late 1700s, the Murray family owned a nursery of more than 100 acres filled with trees and other plants imported from around the world. In the late 1800s, when the nursery gave way to residential development, the burgeoning neighborhood was named for the family: Murray Hill. 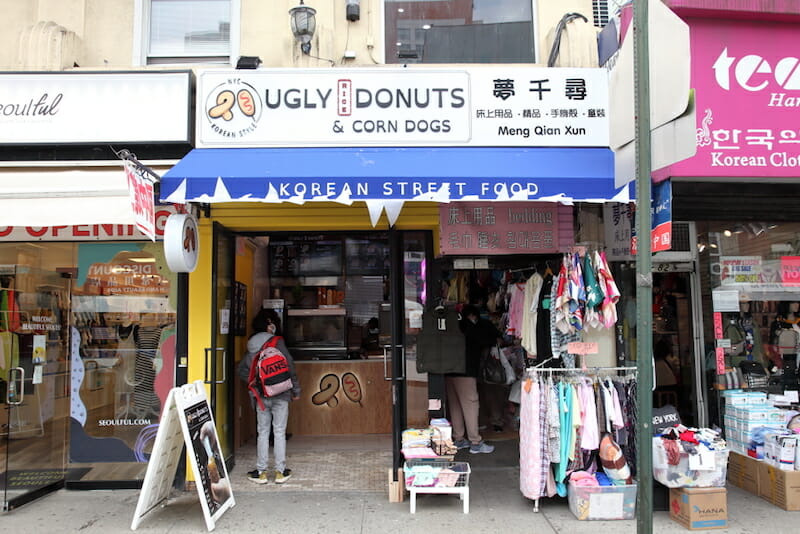 Since the 7 train that carries hungry explorers from Midtown Manhattan terminates in the heart of Flushing’s Chinatown, venturing eastward into Murray Hill requires a little bit of doing. A free transfer from the subway to a bus that travels along Northern Blvd., Murray Hill’s major thoroughfare, is one everyday option. On weekends, the LIRR commuter rail offers a discounted fare from Manhattan’s Penn Station to anywhere within the city limits.

Walking from the 7 train is an option, too, when we’re sure we won’t succumb to the immediate temptations within Flushing of too much Chinese food. Instead, we prefer to begin snacking after stepping off a commuter train (or bus) at (or alongside) the Broadway station of the LIRR. 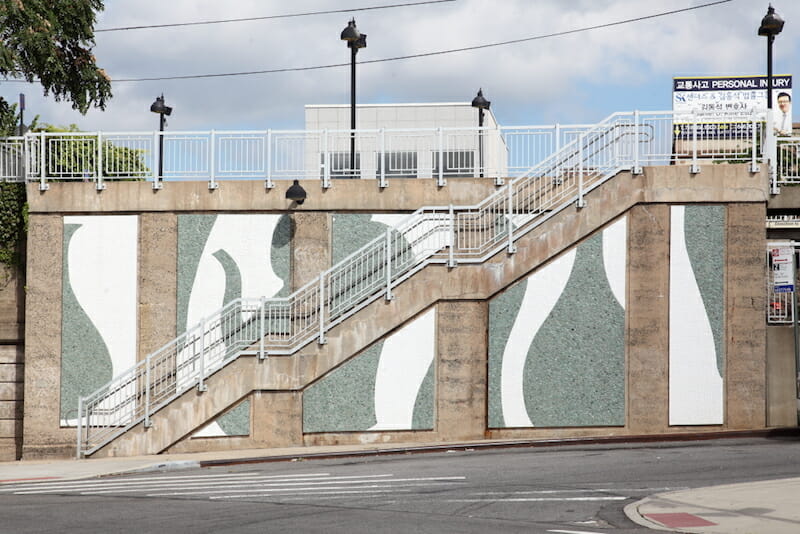 First, however, we always take a few moments to admire the mosaic, more than twice our height, on the south wall of the station. From a distance, “Celadon Remnants” (by Jean Shin, completed in 2008) consists of abstract forms in its namesake green-blue. Close up, each of the remnants that make up the mosaic – these were donated by the city of Icheon, South Korea – has a beauty of its own.

A few minutes’ walk to the west is The Basac, one of the first restaurants in the city to serve the Korean take on the classic American corn dog. The original – a wiener impaled on a skewer, coated in cornmeal batter and deep-fried – has been a standard at U.S. state fairs at least since the 1940s. The Korean version, at the Basac, skewers cheese in with the wiener, on request; introduces rice flour to the batter, for a somewhat chewier texture; and offers a half-dozen options to embellish the coating. This includes cubed potatoes, corn flakes, ramyun (instant noodles) and squid ink. For that last option, the base of the corn dog is sliced in four and curled back, to suggest tentacles and a head; we always start eating at the tail end. 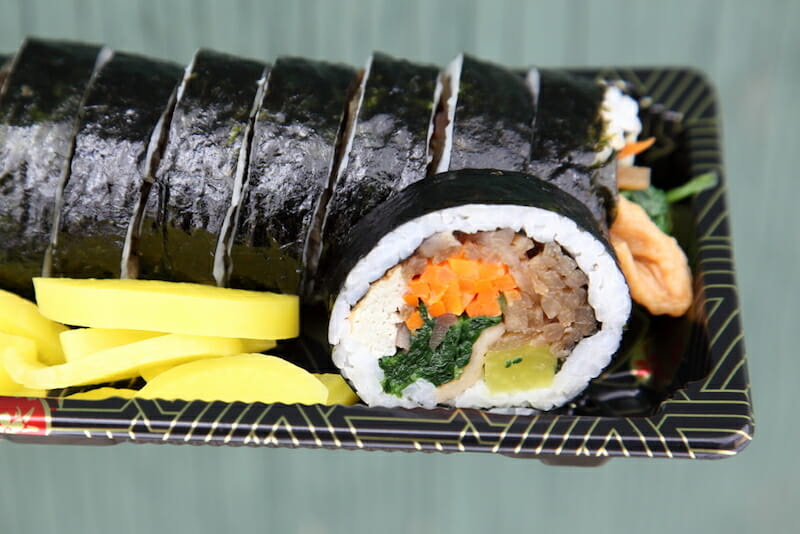 The namesake menu items at New York Kim-Bob NaRa looks a lot like Japanese sushi rolls. And, in fact, the name gimbap (a more common spelling than kim-bob) does refer to gim, pressed and dried seaweed, rolled around bap, cooked rice. But while Japanese sushi rice is seasoned with vinegar, bap takes on the traditional, sweeter, Korean taste of sesame oil. And while a sushi roll often features a single type of raw fish, the typical gimbap often includes cooked or preserved items in a medley of textures and flavors. One of our recent rolls included fish cake, egg, stewed burdock root, carrot, spinach and danmuji (bright yellow pickled radish). More radish awaited alongside, to refresh the palate. This small shop offers more than a dozen varieties of gimbap prepared to order; all of them are easy to carry away and to share. 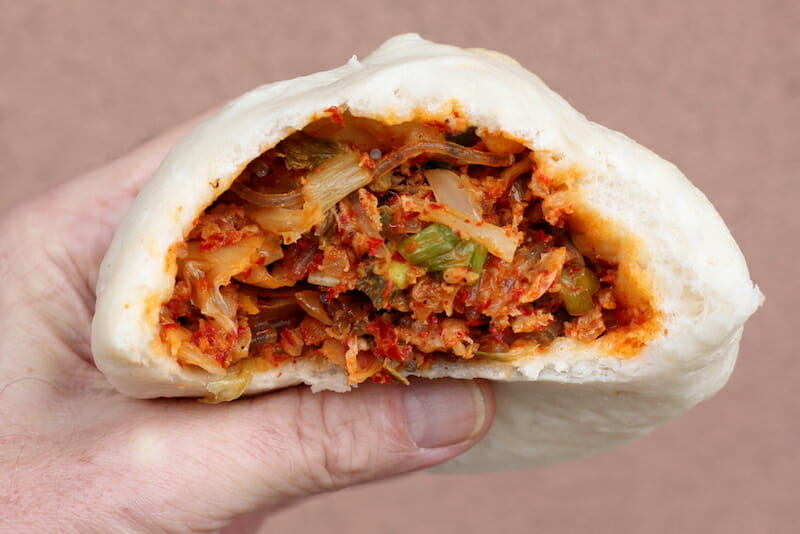 The word mandoo, at Northern Wang Mandoo, can refer to dumplings. The versions at this shop, often assembled by hand in the dining room and later boiled or pan-fried by the dozen, are virtually indistinguishable from their Chinese cousins. But here, the name wang mandoo, or “king” mandoo, describes a steamed bun as big as a monarch’s fist. Our favorite is overfilled with minced pork and kimchi (salted and fermented vegetables – in this case, cabbage) and threads of translucent sweet-potato noodles. We’ve never taken the time to pick through and identify all the other little tidbits inside, and anyone who’d ask us to put down our wang mandoo, for a thorough inspection, would have a fight on their hands. Maybe we should say that it’s as big as a boxer’s fist. 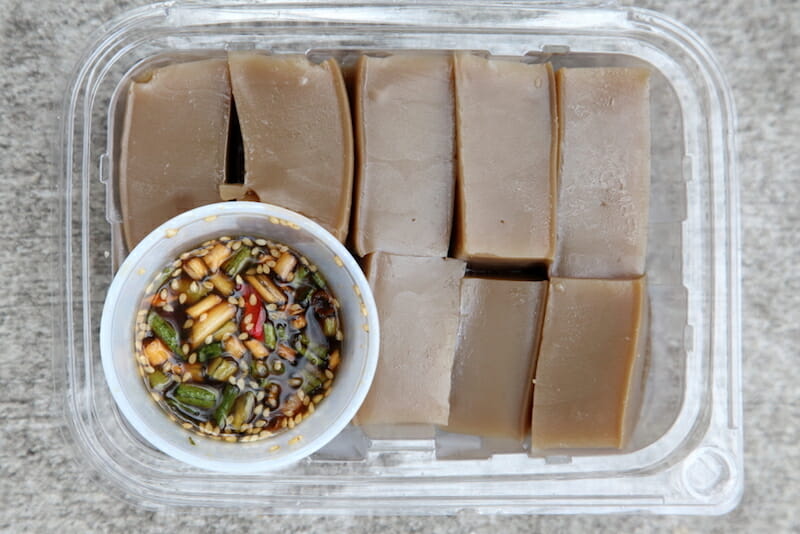 Despite its drab color, there’s something about the pale brown jellied starch called dotori muk that calls out from the grocery shelves of Hansol Foods. The first time we encountered dotori muk, some years ago at another shop, the attendant – pantomiming with two hands to her lips – explained that it was “like [what] squirrels eat.” Acorn jelly, that is. The tannins in raw acorns are unpalatable and, if consumed, not easily digestible by humans (we can’t speak for the squirrels). Leaching the acorn starch remedies those problems, but also leaves less flavor. In truth, the bland sliced oblongs of dotori muk are a conveyance for a soy-based dipping sauce – it’s the one colorful thing in the container – that’s seasoned with garlic, chile pepper and sesame seeds. A little goes a long way. 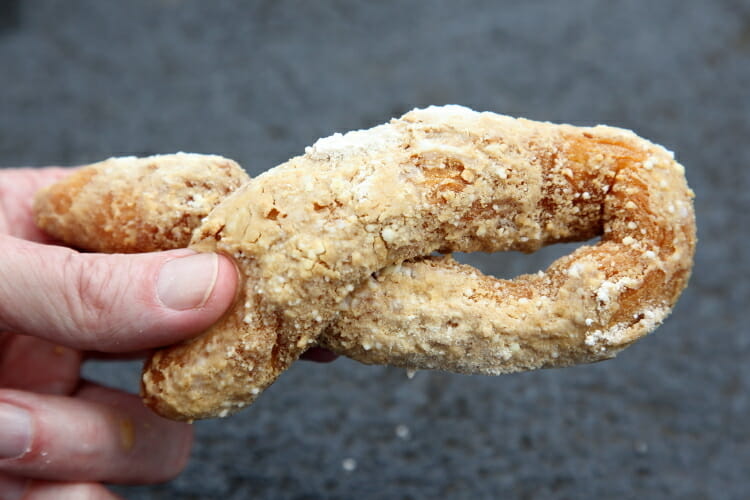 At Ugly Donuts & Corn Dogs, the larger-than-life plastic models of decorated wieners on skewers can be very enticing when we haven’t already cast our eyes toward the kkwabaegi (Kwah-bay-jee). The name describes traditional Korean twisted donuts – these include a little glutinous rice flour, too, for chewiness – but thanks to an emphasis on deliciousness rather than good looks, “ugly” is easy to understand. That’s particularly true for the version that coats the donut (and, very soon, our fingers) with injeolmi, sweetened toasted soybean flour. Simpler and slightly less messy donuts are coated only with sugar, or cinnamon sugar; all of them are handed over so fresh and hot that the counterwoman warns us to let them cool a bit. We can hardly wait. 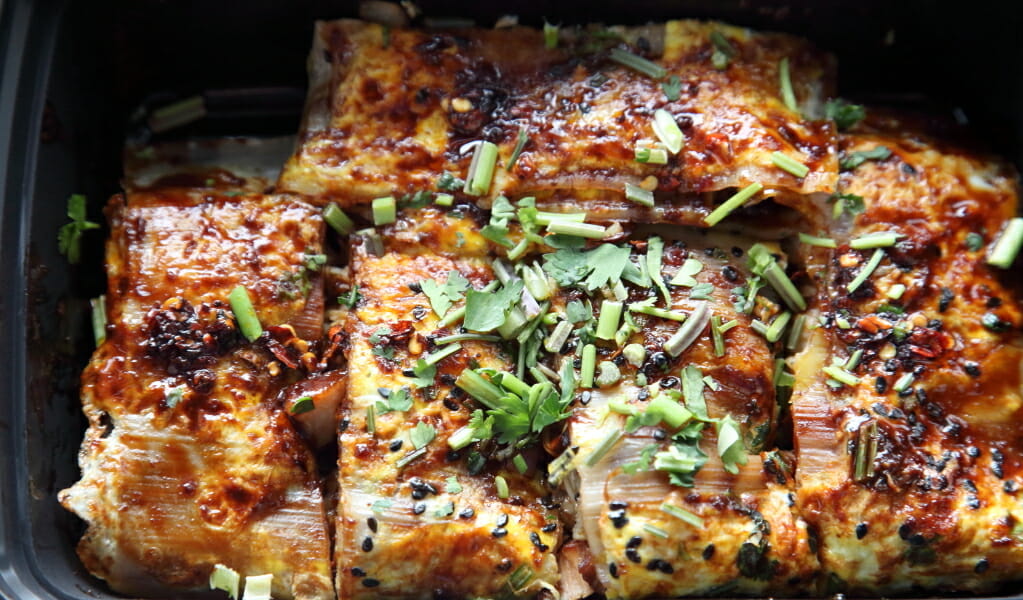 A Snacker’s Guide to Flushing

Queens | By Dave Cook
By Dave Cook
QueensNew York City has many Chinatowns; how many is a matter for dispute. While the oldest and most famous is in Manhattan, southern Brooklyn now boasts two such neighborhoods – or maybe three, depending on who's counting. Without a doubt, however, the city's largest and fastest-changing Chinatown surrounds the eastern terminus of the 7 train… 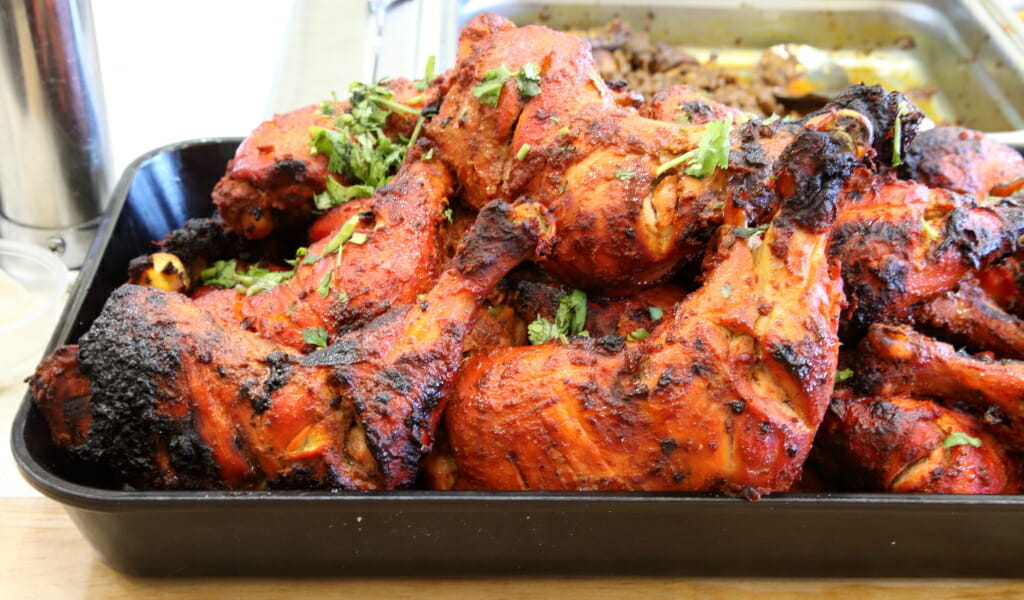 Queens | By Dave Cook
By Dave Cook
QueensFor Queens, one culinary claim to fame has always been the variety of cuisines on offer. That was the case in 2019 and before, it held true in 2020 and continues to this day, late in 2021. The onset of the pandemic, however, meant that businesses sometimes felt as isolated as individual families. Many were… 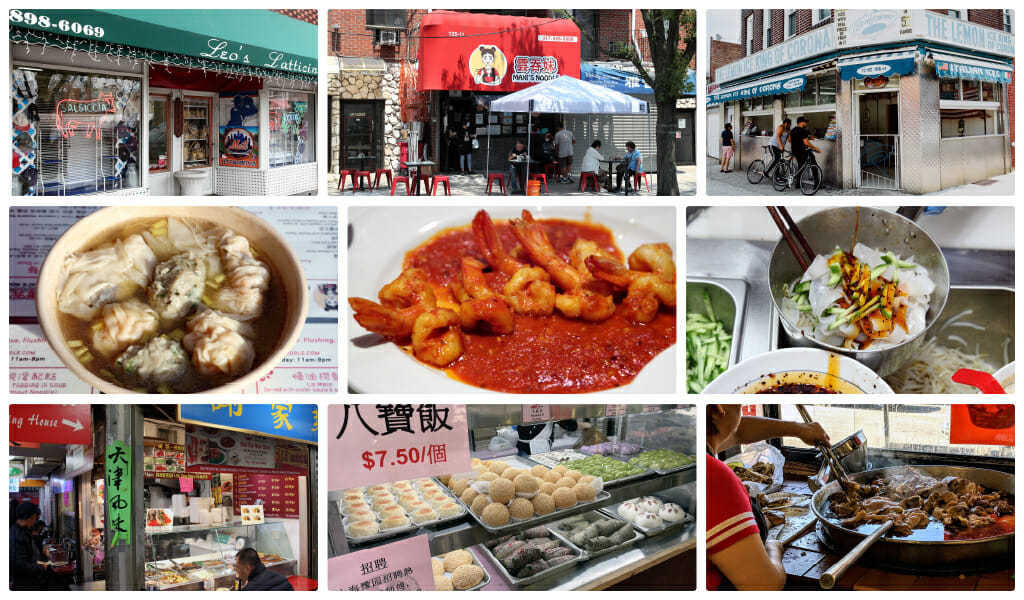 Queens | By Dave Cook
By Dave Cook
QueensEach year in late summer, some of the best athletes on the planet converge on Flushing Meadows Corona Park to compete in the United States Open Tennis Championships. In 2021, the U.S. Open begins with practice sessions and qualifier matches on Tuesday, August 24, and concludes with the men's singles final, scheduled for Sunday, September…