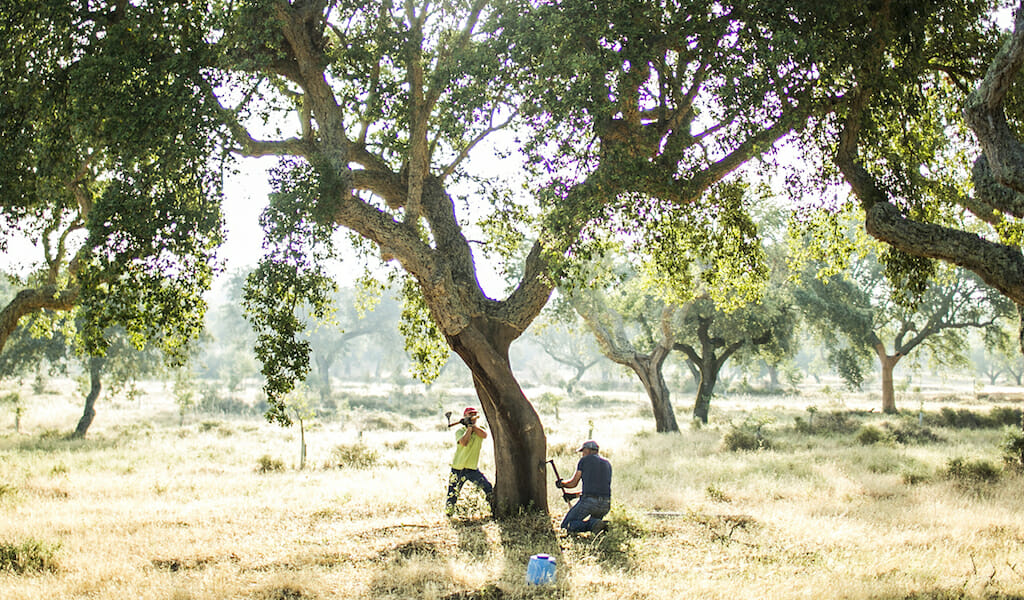 We were crawling through traffic on Porto’s ring road in our rental car when dawn finally caught up to us, illuminating the spectacular view of the Douro River down below. That slice of the waterfront quickly glided past as we exited the bridge, soon replaced by the lush rolling countryside south of the city: olive trees, low grape arbors. We were on our way to Santa Maria de Lamas to visit the headquarters of the world’s largest cork producer, Amorim Cork.

Like most visitors to Porto, one of the first things we did upon arrival was a port wine tasting, perhaps the most famous feature of the city’s culinary culture. It was December 2016, and we had barely unpacked our bags before strolling down to the Douro River’s quays and finding a small spot to partake in this delightful ritual, one that has evolved over centuries. Three ports – white, pink and rubio – were placed before us, lined up on a leatherlike cork cloth. While each vintage was excellent, we were curious about the connections within that tableau of cork and port, hence our trip to the countryside.

Despite printed directions and a GPS, we got lost once we left the highway and had to navigate narrow country lanes. At a light-filled café our lack of Portuguese was comical. By the time we reached Santa Maria de Lamas, friendly people had offered us directions in three languages (Portuguese, French from a truck driver, and English from a policeman on foot) plus a pictograph drawn by a woman in the café. Passing signs for other cork manufacturers on Rua dos Corticeiros (roughly translated as Corkmaker Street), we finally found the Amorim entrance. Clearly this area had a niche.

Carlos de Jesus, Amorim’s marketing director, and his colleague Bruno welcomed us. We had hoped António Amorim the elder, almost 90 years old at the time and the most active member from his generation in the family business, might join us. But that day he was down with a cold.

Right off the bat, we posed a question to Carlos that had been knocking around our head for quite a while. Why were so many cork companies based in northern Portugal, when the country’s cork oak forests were mostly in the south? He admitted it was a historical puzzle. 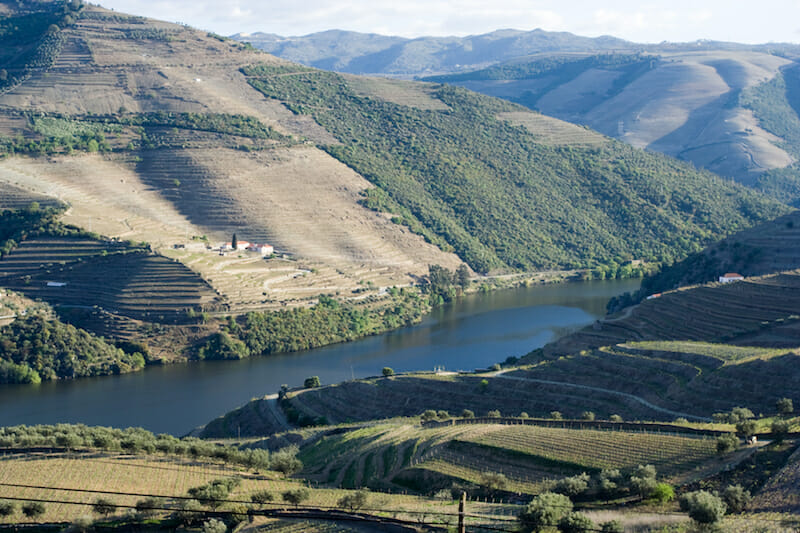 For centuries, wine producers in the Douro Valley had been not only excellent vintners but also canny businessmen. They had navigated European trade wars, starting in the 1300s. And since 1756, port wine production in the Douro Valley has been regulated, making it one of the world’s oldest defined and protected wine regions. (Only Chianti in Italy and Tokaj in Hungary are older.)

The evolution of wine containers in that same century turned on the rediscovery of an ancient technology near at hand: cork, from the cork oak.

Douro wines first gained a reputation in the ancient Roman era. As soon as Portugal came together as a kingdom in 1143, the region was exporting wines. In 1386, the Treaty of Windsor formed a special trade relationship between England and Portugal, with many English merchants moving to Porto to ship wines back home. Still, French wines held favor among English wine drinkers until the 1600s, when a trade war between England and France created an opening for other producers. (Louis XIV first restricted the import of English goods; Charles II retaliated by banning French wine imports.)

Porto’s exporters added a touch of brandy or another spirit to stabilize the wines for the voyage. For centuries, port wines came down the Douro River on flat-bottomed barcos rabelos – colorfully restored versions of this boat line the docks nowadays – to cellars across the river from Porto’s old city.

In time, the Douro wine exporters made a habit of adding the brandy before the wine finished fermenting, which resulted in a slightly sweeter, fresh-tasting wine. People noted that these fortified wines could age much better. This capacity further improved with longer bottles that could be stored on their side and allowed to cellar. And secure stoppering with cork was what made that sideways cellaring possible. By 1850, wine producers were fortifying nearly all the wines they exported.

The English dubbed these “port wines” for the city of their origin, and exports to England gained traction after the Methuen Treaty of 1703, which reduced Portuguese export duties on wines shipped to England. It was the Marquis de Pombal, the government minister who seized power during Portugal’s recovery from the devastating 1755 Lisbon earthquake, who introduced controls in 1756 that enshrined the quality standards to keep hold of the English market.

Pombal had a dual aim, notes writer and wine expert Oz Clarke: first, curb the power of English exporters, and second, give some financial stability back to the wine growers in the upper Douro. Pombal required all port wine leaving the region to be tasted by the Douro Wine Company. In a precursor to Fair Trade, the company guaranteed better prices to grapes grown under the preferred conditions on black, crumbly schist soils. The best vineyards were staked out with granite posts.

For the first half of the 20th century, cork was the most modern of materials.

As exports grew over the following century and the region required more cork for shipping, the cork industry gravitated north from the cork forests of the Alentejo region. António Amorim, the founder of Amorim Cork, built a factory on the Porto quay for making handmade cork stoppers in 1870. In 1908, the family opened a new plant in Santa Maria de Lamas to increase capacity and broaden to other products.

For the first half of the 20th century, cork was the most modern of materials and used not just in stoppers but in any industry that needed its flexibility and ability to seal, ranging from automobile gaskets and windshields to bomber planes.

Then in the 1950s, Carlos, Amorim’s marketing director, explained, “the idea of modernity changed.” With the sudden rise of cheap plastics after the war, the cork industry saw a decline. This was punctuated in the 1990s by a steeper decline as plastic made inroads even in wine bottling. Cork’s prospects were complicated further that decade by Trichloroanisole, or TCA, a chemical compound that can occur in natural cork from an interaction of plant phenols, chlorine and mold, and which caused musty odors in wines. Carlos said the 90s were a “kick in the pants,” as plastic screw tops became more popular and forced cork makers to invest anew in research and development.

In the past 15 years, cork has become modern again. As public concerns over plastic’s environmental waste have grown, cork has shown itself as eco-friendly and Portugal’s cork forests as harbors of biodiversity.

Carlos was heartened also by the growth in eco-friendly construction, and the prospects for growing more cork oaks to meet future demand. Amorim works with growers, he said, to help make cork harvesting one of the highest paid farm-based livelihoods: workers earn roughly €95-100 a day during the three-month harvest season.

The cork industry has increased efficiency enough to undercut the cost of plastics and screw tops. Now seven out of ten wine bottles globally are still sealed with cork. The pop of cork from a wine bottle “is one of the most iconic sounds in our culture,” says Carlos. 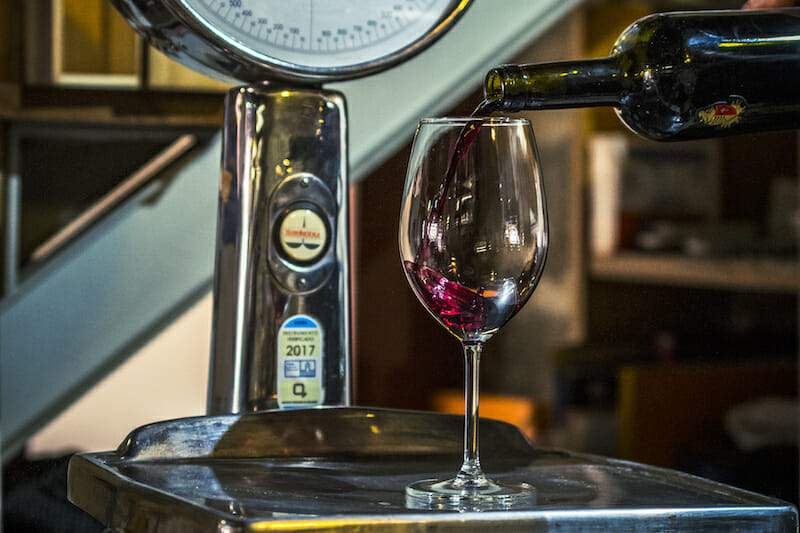 You can learn a lot of history in the Founder’s Museum, which occupies the charming 1885 stone house on Amorim’s grounds. Beside the front door stands the shell of a cork oak, skillfully shorn off the tree’s trunk and branches in a single sleeve, like an apple skin. Cork oak is the only tree species that can be peeled this way without hurting the tree. A cart once used for hauling the cork sheaves from the forest leans nearby.

The exhibits inside open a window on this remarkable intersection: an old map of the Douro shows Porto’s Gaia Quay, where António Amorim made his cork factory in 1870, alongside dramatic photos of their later factories in Lamas in 1890 and the 1930s. And a tableau features a life-size image of a cork oak being shorn of its layer by two skilled harvesters, with the curved husks from the tree like thick hides, surrounded by the harvest tools, laid out before you. (The Founder’s Museum is not to be confused with the Santa Maria da Lamas museum, which is also called the “cork museum” and features this history too.)

Bruno showed us through the new factory, pointing out how their research and new production rules helped to defeat TCA, the cork taint that caused the problems in the 1990s.

After a morning spent talking history, all of our stomachs were grumbling. So we decided to visit a local favorite for lunch. Bruno gave us a ride in his car. Climbing into the back seat, Carlos remarked, “Christmastime, everything smells like cod.” Bruno looked embarrassed. “I was bringing it home,” he said. Salted cod was the company’s holiday gift to staff. Across Portugal, cod is the king of Christmas.

Our destination was Restaurante 1715, named for the year the restaurant opened, a dozen years after the Methuen Treaty. Going inside, we were surprised to find a hearty crowd enjoying a remarkable buffet of dorado and potato, polvo (octopus), melon squares and greens. Desserts included king cake and crème brulee.

In this place food and wine have held hands for centuries. On the drive back to Porto, we marveled again at the green hills and vineyard rows. The clever Douro wine producers, having perfected a system and technology for exporting their wines to the world, had now lured wine lovers to come to them.

David A. Taylor is a U.S.-based writer and the author of Cork Wars: Intrigue and Industry in World War II.

This article was originally published on February 20, 2019.

By
David Taylor
, photos by
Rodrigo Cabrita and António Morais

Porto | By David Taylor
By David Taylor
PortoWe were crawling through traffic on Porto’s ring road in our rental car when dawn finally caught up to us, illuminating the spectacular view of the Douro River down below. That slice of the waterfront quickly glided past as we exited the bridge, soon replaced by the lush rolling countryside south of the city: olive…