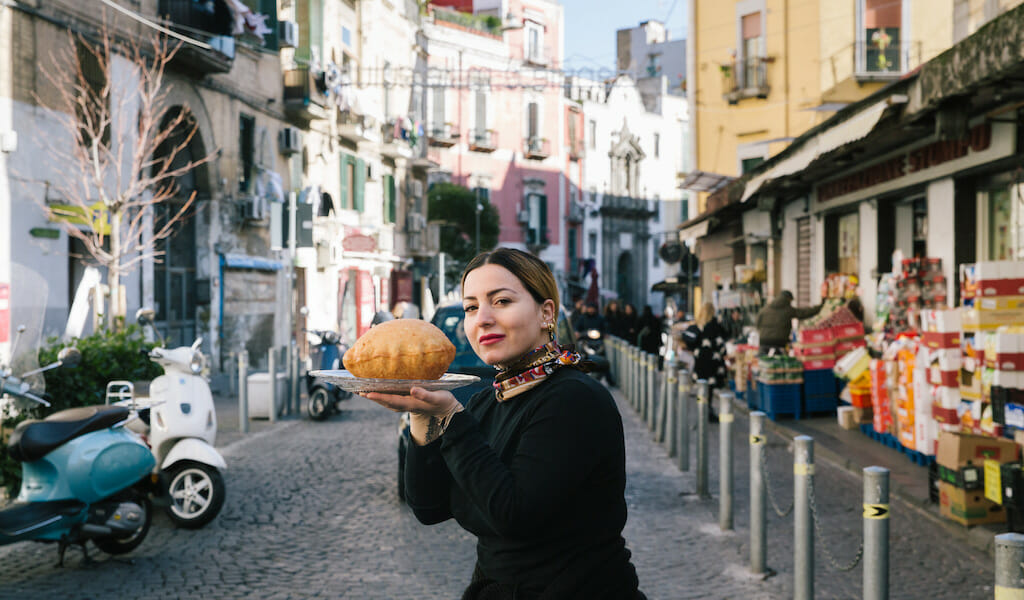 After a morning spent walking around the Fontanelle Cemetery, the oldest ossuary in Naples, and the Sanità market, we believe that we have created enough of a calorie deficit to face a fried pizza – the original pizza, born before the more familiar oven-baked variety, and a universally beloved dish in the Neapolitan cuisine – with self-acquittal.

And in the Sanità neighborhood, there’s no question that we’ll be seeking out the fried pizza of Isabella De Cham. The 26-year-old makes creative and high-quality fried foods in an elegant and polished restaurant, with a black-and-white color scheme – not quite what you’d expect for a fried pizza joint, although the familiar warmth is still there.

Production is efficient, organized and visible through the large windows that separate the dining room from the kitchen. The preparation of the dough, the addition of the filling, the pressing of the edges with powerful strokes, the immersion in boiling oil – all take place before our eyes, like scenes in a film.

The entire process, from start to finish, is overseen by women – fried pizza has long been their domain, so we know that they have an edge. Susanna takes care of the friers, Alessandra is the handy(wo)man and Isabella’s right hand, Imma is the wine specialist, Ilaria makes the dough, and Antoniette, a true orchestra conductor, oversees the cash desk. But that’s just the tip of the iceberg – there are 20 employees in total at this small business. 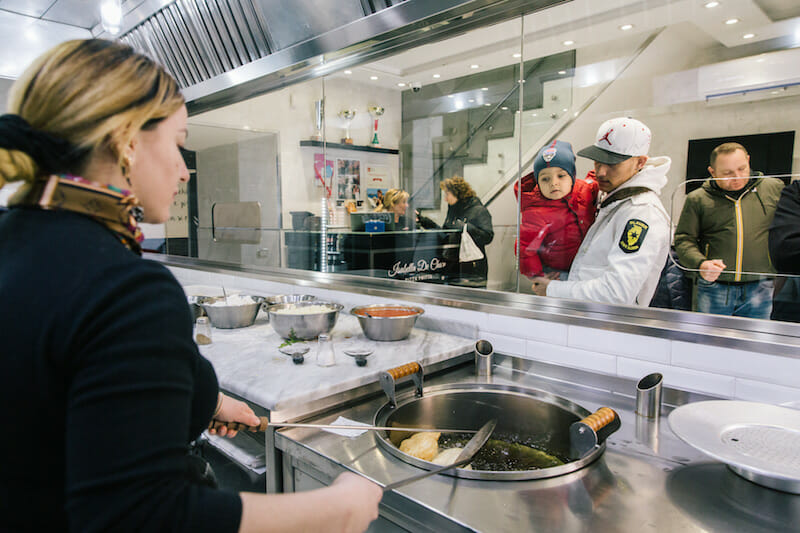 Isabella’s last name – De Cham – is of French origin (like many Neapolitan last names inherited from when the French governed Naples at the beginning of the 19th century) but she is certainly a true Neapolitan, as evidenced in her temperament, enthusiasm and the energy she transmits.

“I was only 16 when I started working in a pizzeria in the Sanità quarter – Pizzeria Oliva. Then I worked in Masardona, the Neapolitan temple of fried pizza. I never touched the dough, but I learned many things from the master pizza chefs, just from looking,” Isabella tells us.

In 2018, she decided to challenge the sacred masters of the Neapolitan pizza world by opening her own fried pizza spot. It was a risk that paid off – today she is one of the best-known pizza makers in Naples and has even expanded, opening a second Isabella De Cham Pizza Fritta in the Montesanto market (Via Portamedina 53).

In 2018, she decided to challenge the sacred masters of the Neapolitan pizza world by opening her own fried pizza spot.

“I am very attached to the traditions of my city. I am fortunate to live in a very popular neighborhood, Sanità, a neighborhood where traditions are still deeply felt,” says Isabella.

Besides her hard-earned pizza-making skills, Isabella has built a reputation for herself by using high-quality ingredients and employing ancient methods. “I let the dough rise for a long time, from 36 to 48 hours,” says Isabella. The result is a truly light, elastic pizza.

The standard fried pizza is filled with pork crackling, ricotta, pepper and basil; we always choose this classic filling because we believe it is the pizza on which all pizza makers should be measured. Here it is divine (which comes as no surprise). 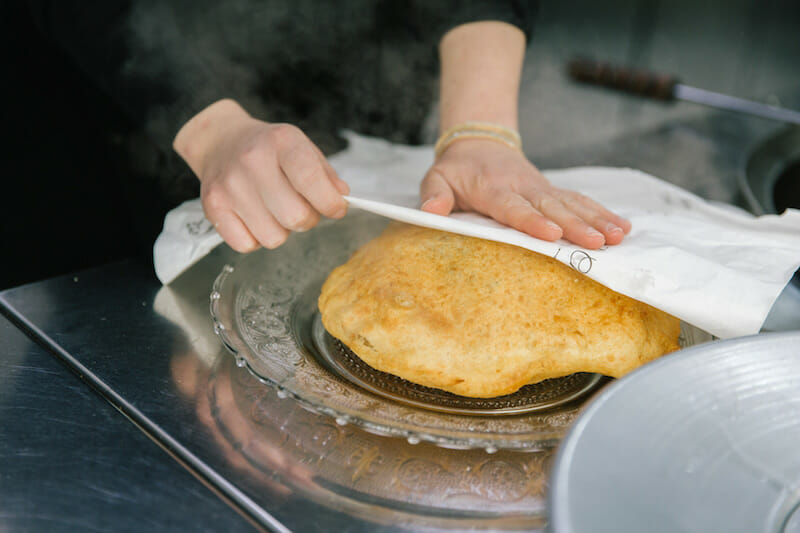 But there are many other options on the menu. One of the most popular is the Donna Isabella pizza, which is filled with rucola (rocket), provola cheese and lemon zest. We also see many people eating the Zia Nuna pizza, stuffed with yellow tomatoes, salami, provola and caciocavallo.

Then there is the fried pizza with eggplant, which is called Papino – it’s dedicated to Isabella’s dad, Salvatore, a taxi driver, who helped her make her first fried pizzas. “One Sunday morning, I told my family that I was going to make fried pizzas,” she tells us. “I made small fried calzoni stuffed with mushrooms and eggplant. The only one to help me was my father, and for this reason I still call the eggplant pizza ‘Daddy.’”

And in addition to ingredients and technique, there is Isabella’s creativity that fuels her fried creations. The montanare (small fried pizzas) are stuffed with unexpected combinations: shrimp and avocado, broad beans and bacon, Genovese sauce.

But her boldest experiment is frying the Neapolitan pastiera. The pastiera is the oldest and most traditional dessert of Neapolitan pastry, with a base of shortcrust pastry filled with ricotta, boiled wheat and candied fruit. The resulting “Millefritta Pastiera” is an explosive dessert, a fusion of modernity and tradition.

This article was originally published on February 7, 2020. 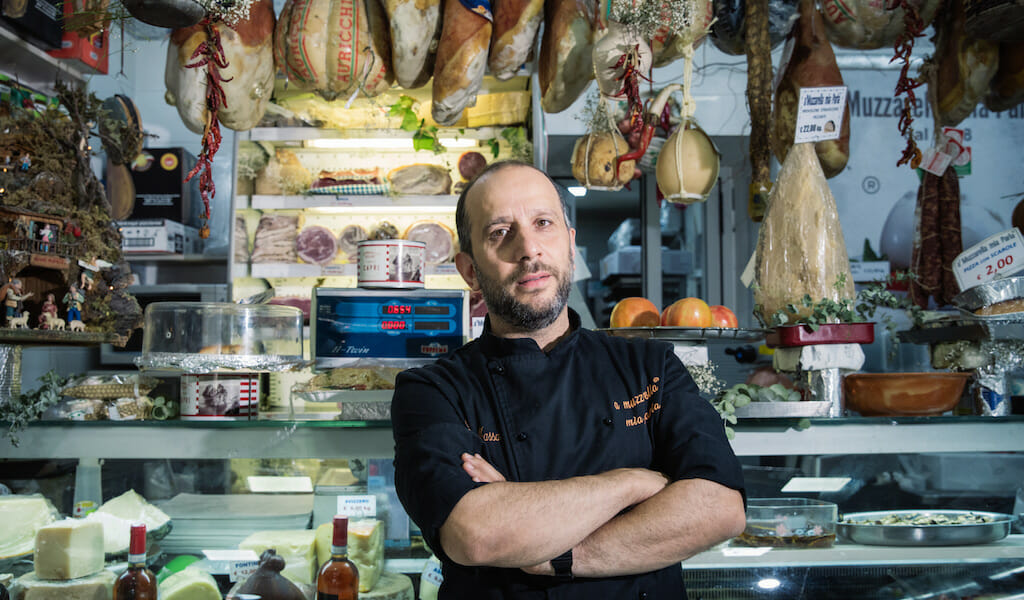 Naples | By Amedeo Colella
By Amedeo Colella
NaplesWhen Michelangelo made his Moses statue at the beginning of the 16th century, he found it so lifelike that some say he asked the statue, “Why don’t you speak?” Michelangelo’s Moses, which is now housed in a church in Rome, never said a word. But centuries later, in 2009 to be exact, a customer entered… 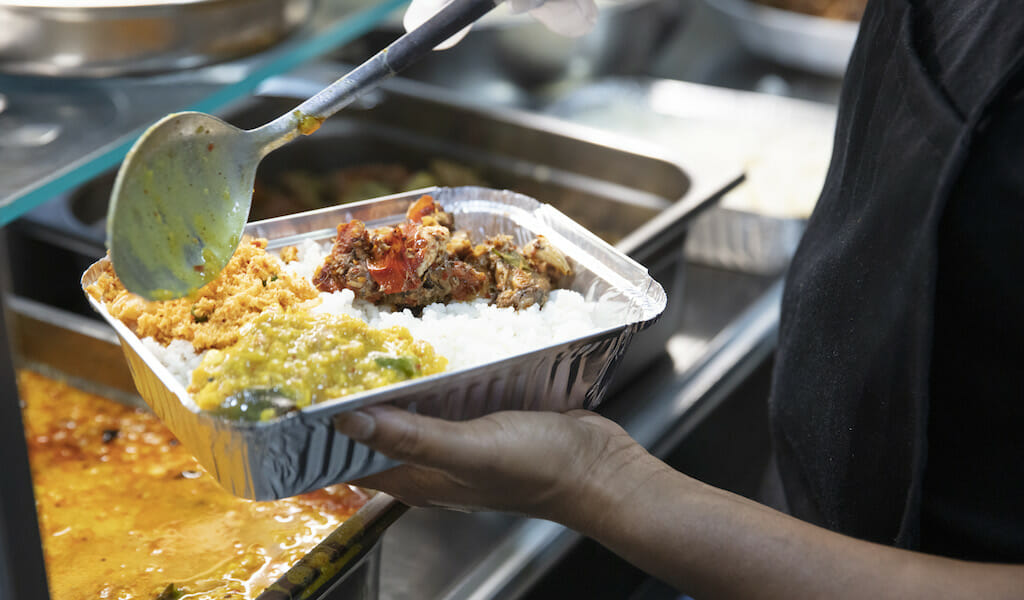 Naples | By Tobias Mueller
By Tobias Mueller
NaplesOn Sunday around lunchtime, the streets of Sanita can get almost eerily quiet. Where normally children play, scooters zoom past, shopkeepers haggle loudly with old ladies, and neighbors stick their heads out of their windows and discuss the latest gossip, suddenly nobody is to be seen or even heard. Sanita is still a very traditional… 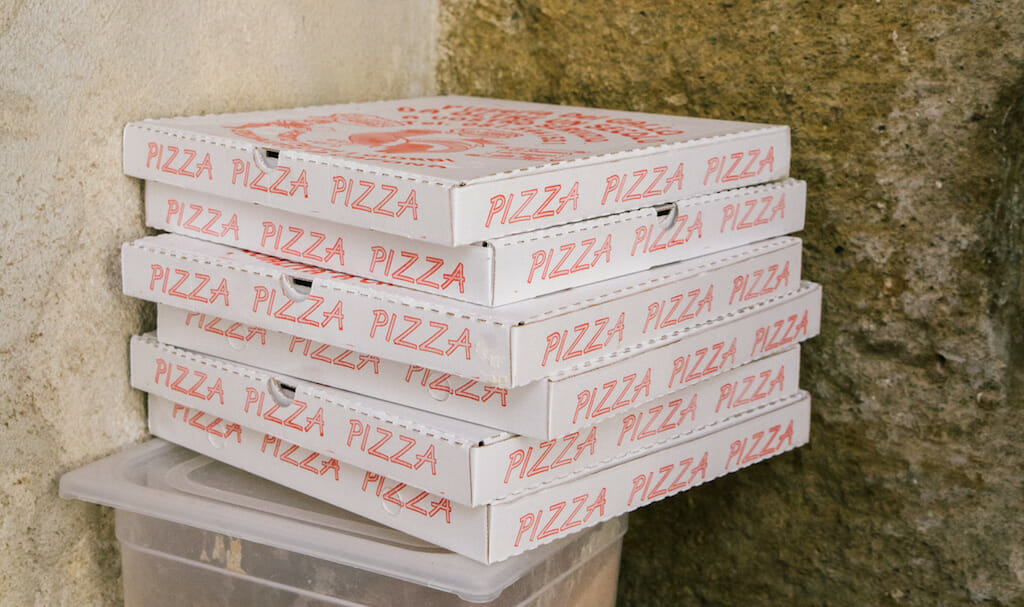 Naples | By Amedeo Colella
By Amedeo Colella
NaplesOn Saturday, May 2, we were finally able to eat real Neapolitan pizza once again. No more homemade pizza, thank goodness (a timely measure as yeast is becoming harder to find across Italy). The threats of Vincenzo De Luca, the president of the Campania region, to use flamethrowers in response to those who violated the…