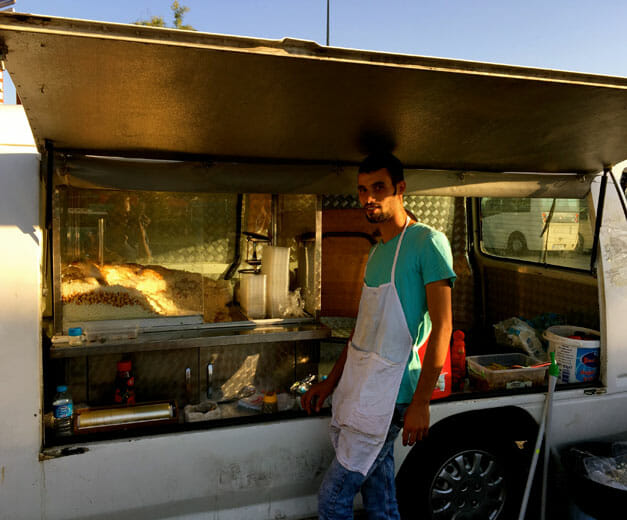 The Yenibosna bus station sits at the intersection of numerous transit routes, where passengers can embark on journeys to the furthest corners of the city as well as to its beating heart.

Close to Istanbul’s main airport, and wedged in beneath several high-rise towers that seem to have ascended from the ground overnight, the bus station sits adjacent to a major metro line and below the main E-5 highway, with the grubby, crowded neighborhood of Yenibosna to the north.

As thousands of people crisscross through the terminal daily, naturally there are a handful of places to grab a quick bite. And in keeping with the theme of transit, the top culinary delights of the drab station happen to be sold out of the back of vehicles.

Brothers Kamuran and İbo sell small plastic containers of delicious butter-laden rice topped with chicken and chickpeas directly out of a Mitsubishi minivan to hungry passengers and drivers alike. These brothers – who hail from the southern province of Adana, better known for its kebab – are seasoned veterans, as they have been making and selling rice since they were children, a profession inherited from their father. “I’ve been doing this for 13 years, and I’m 20 years old,” İbo said.

On our latest visit, the small white van was encircled with taxis and minibuses, the drivers of which had rolled up to grab a quick bite before returning to work. 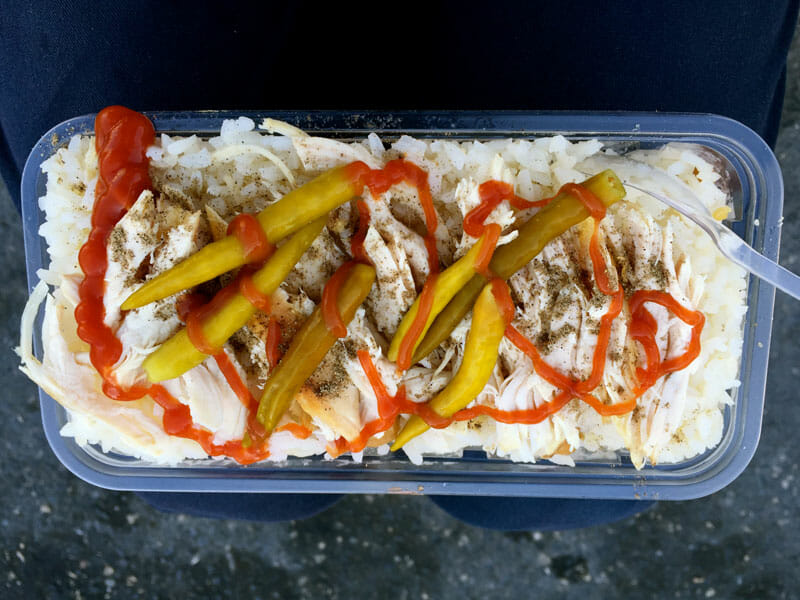 The rice can be ordered plain, heavy on the chickpeas, with or without shredded strips of chicken. Optional condiments include black pepper, spicy biber turşusu (slender, pickled green peppers) and ketchup. While we knocked this latter addition before trying it, the ketchup is a surprisingly important element of the streetside staple. The buttery rice, chicken and chickpeas constitute a formidable fortress of wholesome richness, balanced by the potent spicy peppers and sweetness of America’s favorite French fry topper.

Kamuran and İbo can be found nearly every day selling the rice that they cook themselves, though if their van is nowhere to be seen, it’s likely they have been chased away by police since they do not have official permission to set up shop within the station. Fortunately, their kitchen is also their getaway vehicle: “Once I fled the area while a customer was still inside,” the 25-year-old Kamuran said with a smile.

Right where the bus station fades into the entrance to the Yenibosna metro stop is another great option for a quick snack on the go, also sold out of the back of a car. A gentleman by the name of Mehmet rolls up wraps of çiğ köfte, a pungent blend of bulgur wheat mixed with tomato paste and a blend of spices. The mixture is spread on a tortilla-like flatbread and topped with iceberg lettuce and spicy sauce per request.

Çiğ köfte is a popular staple found on practically every corner in Istanbul, but Mehmet’s is some of the best we’ve had. The spicy sauce bites, then backs down quickly alongside the cool, crunchy iceberg lettuce, making this çiğ köfte wrap a light and invigorating snack to grab on the go.

Mehmet declined to have his photo taken, possibly out of fear of the police, since he also operates out of the station sans permission and frequently puts pedal to metal when the fuzz is on the prowl. But the four-door with its open hatchback can’t be missed, and shouldn’t be passed up in the event of post-metro hunger pangs.

A portion of Kamuran and İbo’s rice with chicken will set one back just TL 4, while one of Mehmet’s wraps costs a whopping TL 2.50. That’s barely more than bus fare.

Istanbul | By Istanbul Eats
By Istanbul Eats
IstanbulEditor’s note: This post was written by “Meliz,” an intrepid explorer of Istanbul’s culinary backstreets and frequent Istanbul Eats guest contributor who would like to keep her anonymity. At Istanbul Eats HQ, the conversation comes up every once in a while about how çiğ köfte has emerged as a sort of fast-food franchising opportunity: young…

Add to favorites
Yenibosna Bus Station Food Vendors
Vendors do not keep fixed hours but can usually be found from 4 to 10 p.m. at the bus station.