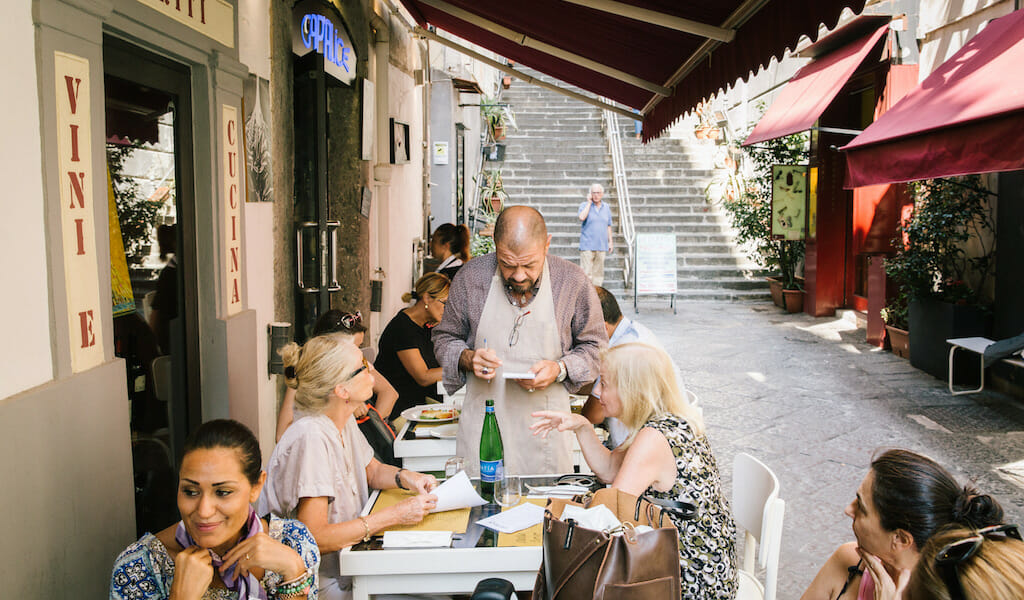 The seaside district of Chiaia, perhaps best known for Via Caracciolo, a boulevard with sweeping views of the Bay of Naples, is the most elegant neighborhood in Naples. Long the seat of the Neapolitan aristocracy, the area is studded with Art Nouveau palaces, elegant boutiques, and Villa Pignatelli, a house museum with an impressive art collection.

But our favorite corner of the neighborhood is Piazzetta Ascensione, a quiet little square at the top of Via Ascensione (the Latin phrase nomen omen, “the name [is] a sign,” applies here, so be ready for a climb). It’s so dear to us in part because there’s a small, charming restaurant just off the square, one with a very distinctive name: Cap’alice.

Cap’alice means “anchovy head” – it’s not the most appetizing image, especially considering that the head is thrown away when cleaning an anchovy and thus has no value. But in Naples there is a saying that goes: “It is better to be the head of an anchovy than the tail of a mullet” (Meglio cap’ ‘alice ca coda è cefaro in Neapolitan), meaning that it is better to be at the front of a small endeavor than a cog in a bigger organization. 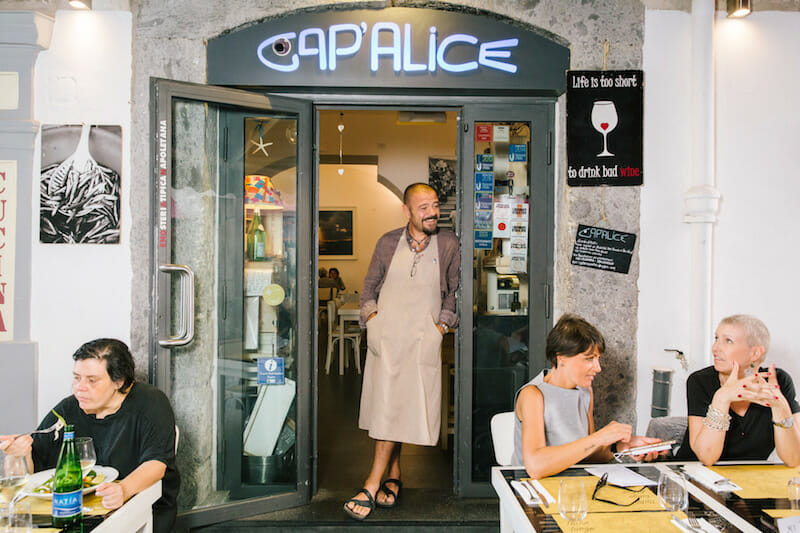 This is the philosophy 47-year-old Mario Lombardi adopted when opening Cap’alice in early 2012 – in fact, it was a saying that one of his high school teachers used to tell him, and he never forgot it. After years spent working in other Neapolitan restaurants, Mario had a dream: to create something of his own, a modest restaurant that paid homage to the gastronomic history and resources of southern Italy. It’s the reason he called his place Cap’alice, the symbol of a small thing over which you have ownership.

He couldn’t have picked a better spot to realize his dream. The plaster vaults of the restaurant are ancient and pleasing to the eye, while a weathered wooden beam at the entrance testifies to the venue’s old age – the building dates back to the 18th century.

And like an anchovy, it certainly is small: there are only 40 seats, with a few extra outside in the summer. Mario can always be found in the dining room welcoming customers, while three waiters work the room and three cooks man the kitchen. 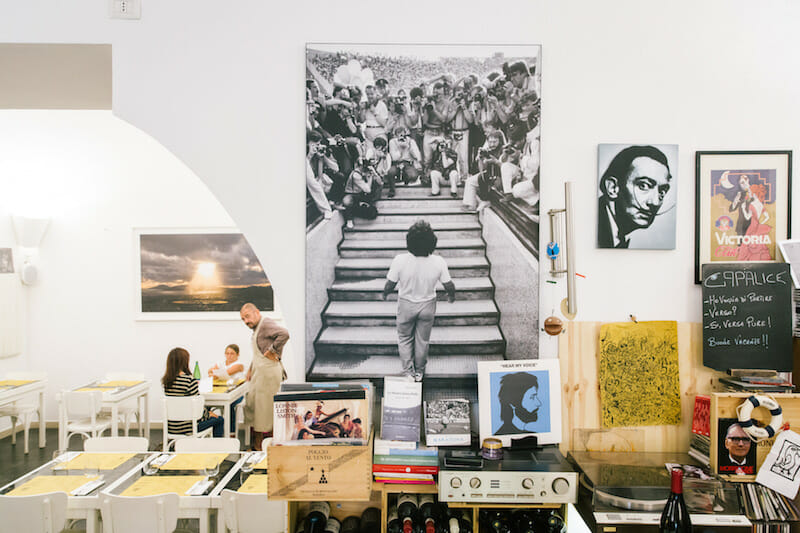 As one would expect for a restaurant named “anchovy head,” the kitchen specializes in fish and seafood – the selection changes daily, depending on what looks best at the market. On a recent visit, anchovies were the catch of the day (it almost seemed a little too on the nose but, as anchovy lovers, we weren’t complaining). We started with the spaghettone and anchovies from Cetara, a seaside village on the Amalfi Coast, followed by a second course of anchovies coated with a mixture of breadcrumbs and finely chopped basil, and then fried.

Also on the menu was spaghetti with Cetara anchovy sauce, a dish that the Cap’alice team has perfected. This anchovy sauce is the direct heir of the garum sauce that ancient Romans made by fermenting fish heads and entrails. It’s an apt dish for a restaurant called Cap’alice.

“It is better to be the head of an anchovy than the tail of a mullet.”

“Here we value the raw materials of the region,” Mario tells us. “I like to use Slow Food products, very high-quality products, even if [they’re] a little more expensive.”

“My Genovese sauce is made only with the best onions, those from Montoro, the coppery onion,” says Salvatore Cozzolino, the chef at Cap’alice, who is nicknamed Celeste (“Heavenly”) because of his blue eyes. “I brown it for 12 straight hours, and I prepare it only when the onion is in season, so only ten months out of the year; nothing is frozen and used out of season, to ensure the highest quality.” 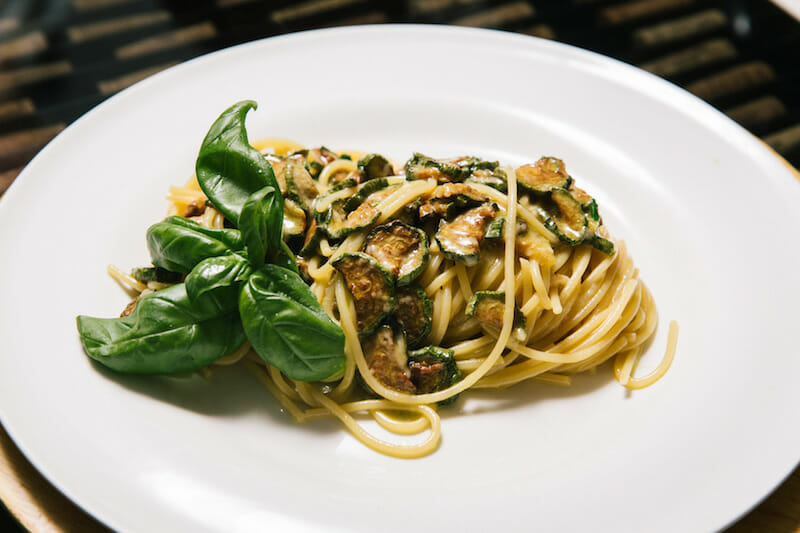 The fish burger, which is made with ricciola (greater amberjack), a fish commonly found in the Gulf of Naples, is homemade. And the baccalà cod is available every day.

The lunch clientele mainly consists of Neapolitans who live or work in the area. In the evening, the district, which is flush with high-quality restaurants, attracts a younger crowd, who come for dinner before going out on the town.

Mario works side by side with his wife, Germana, when she’s not busy taking care of their two young children. “It’s a substantial help for a small company like this,” he says.

More than a cheerful restaurant focused on Neapolitan gastronomy, Cap’alice also prominently features some of the best wines that the Campania region has to offer. Mario periodically organizes tasting dinners with important local wineries, so that they can share the history of their vineyards and make their wines better known and appreciated. As the big fish in his small domain, he gets to decide.

This article was originally published on September 19, 2019. 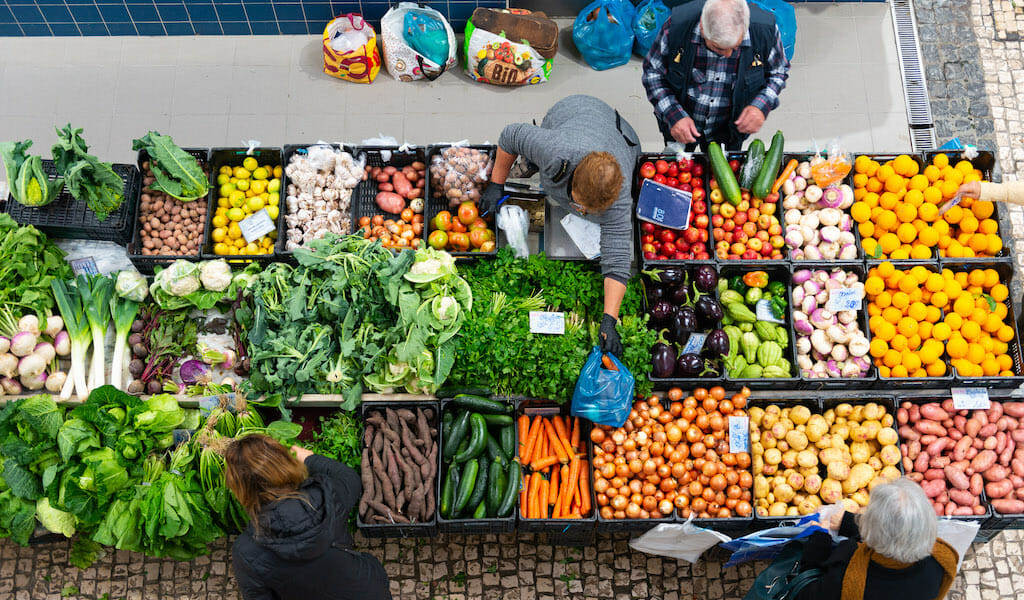 Lisbon | By Austin Bush
By Austin Bush
LisbonAs amazing as Lisbon’s food and drink scene is, many of its markets are underwhelming. The sad truth is that it’s necessary to head outside of the capital to witness spaces that showcase the real bounty of Portugal’s fields, orchards, vineyards, farms and waters. The recently-renovated Mercado do Bolhão, in Porto, is one such place.… 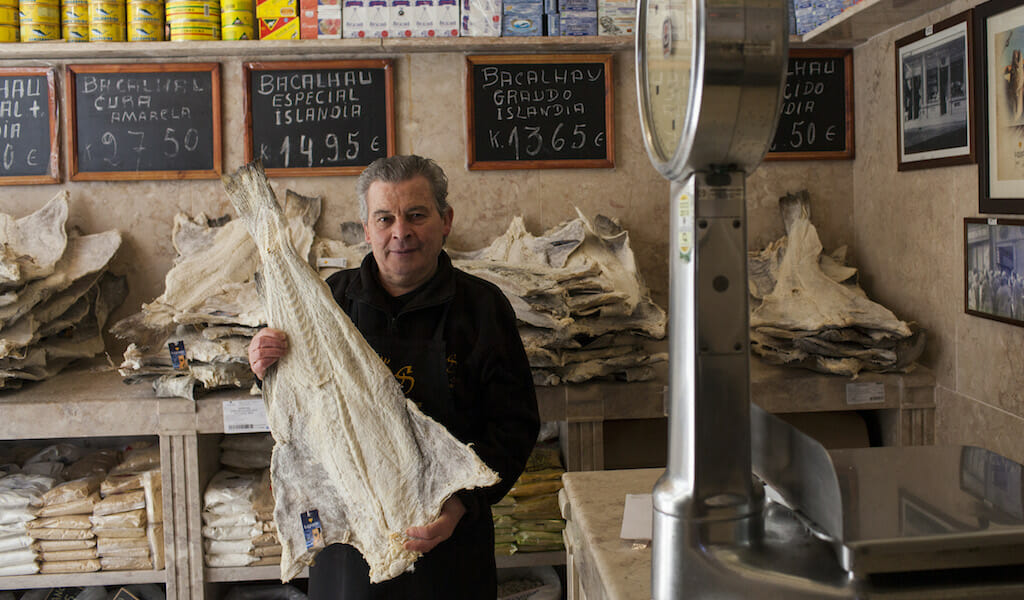 Lisbon | By Célia Pedroso
By Célia Pedroso
LisbonThe black-and-white photo shows a crowd, a policeman and José Martins holding a piece of salted cod, all crammed together in Manteigaria Silva, a small, historic shop in Baixa. It’s from a newspaper clipping dated December 10, 1977 – Christmas season. That year Portugal experienced a shortage of bacalhau, the beloved salt cod that was (and… 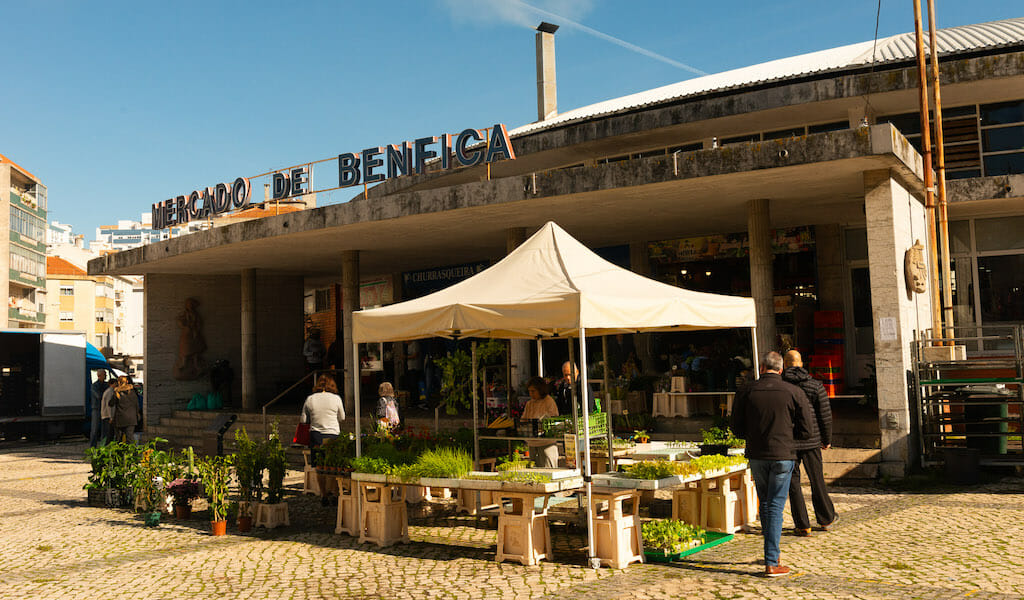 Market Watch: Mercado de Benfica, the Last of Its Kind

Lisbon | By Austin Bush
By Austin Bush
LisbonIn Portuguese, it’s now known as Efeito Time Out, the “Time Out effect.” An iconic fresh market – for example, Lisbon’s Mercado da Ribeira – is renovated and rebranded, given a new life, albeit one that has little to do with the traditional Portuguese market. In 2014, the Time Out media brand took over control…