At Culinary Backstreets, we tend to opt for tradition over trendy, street over chic. We delve into a city’s blind spots when it comes to local favorites. Taking that approach makes it too easy to dismiss new spots out of hand.

So, if it weren’t for our friend Liz hounding us for months about a newish “falafel place” near her house, we almost certainly would not have thought about visiting it. But that’s the great thing about friends – they take us out of our routine and generally bring us to unexpected places, as was the case with Kebab Nation.

Much like how friendship brought us to the doors of Kebab Nation, the restaurant’s roots go back to a friendship formed while Leonardo García, one of Kebab Nation’s three partners, was studying in Paris 15 years ago and living with a Turkish roommate, Bora Hazar. “It came out in conversation that there was something similar about our food,” García says. The two were intrigued by the common traits of Mexican staples like tacos al pastor and Turkish kebabs. 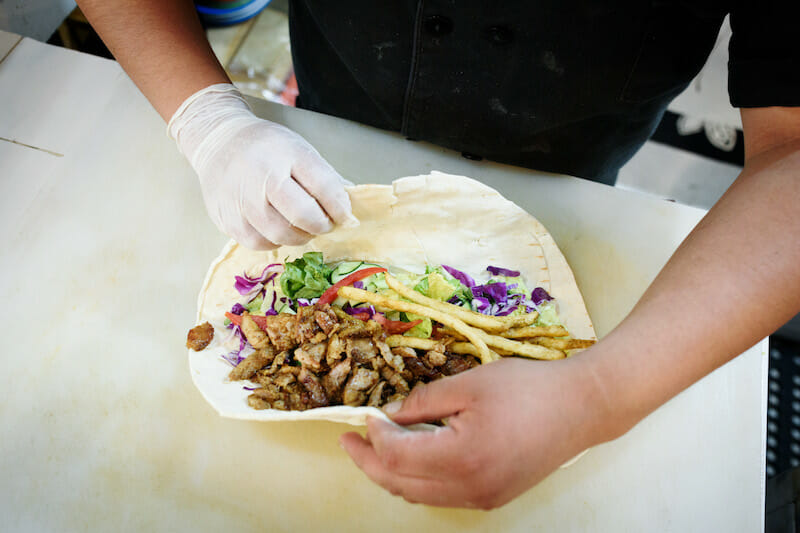 “I had suggested to Bora that it would be good to do something in Mexico,” García says. “That was 15 years ago. We let it go… everyone continued on their way.” The idea was left to simmer.

“I returned to Mexico. After several franchise projects, Bora and I decided it was time to start what we had talked about,” he says. The final piece of the puzzle came when García brought on board his friend Fernando Aramburo, a chef who had studied in the US and had, coincidentally, also befriended a Turkish roommate at school. “It all started really with friendships formed abroad with Turkish folks,” García emphasizes.

The name Kebab Nation stems from this very reality: friends who met abroad, crossing cultures but finding a common thread. It communicates how “the kebab” and the cuisine around it work on a global level on par with sushi and pizza. Based on our visit, the Turkish(ish) eatery, which opened in 2016 on Gobernador Agustín Vicente Eguia in the heart of the quiet San Miguel Chapultepec neighborhood, is off to an exceptional start.

“It came out in conversation that there was something similar about our food,” García says about his Turkish roommate, Bora.

García told us they landed on the smallish venue, which seats about 10-12 patrons, for its cheap rent and to see if their little experiment would bear fruit. Looking to offer what García describes as “a casual experience, with a touch of gourmet,” Kebab Nation indeed offers a robust menu and dishes prepared and presented with attention to detail. Walking into the narrow diner, we found it clean and clearly well-managed, with prices that considerably undercut those you would expect to pay at Mexico City’s cache of Lebanese eateries, which make up the bulk of the city’s Middle Eastern spots.

García pointed out that Mexicans often lump all Middle Eastern cuisine as Lebanese fare, since Lebanese immigrants formed one of the most prominent and successful groups that came to Mexico in the 19th and 20th centuries. (Most famous is the country’s richest billionaire Carlos Slim, whose grandparents sent his father to Mexico at the age of 14 in 1902 to avoid conscription into the Ottoman Empire’s military).

Though you’ll find an overlap with Lebanese cuisine at Kebab Nation, there is definitely a Turkish spin at play here: street food wraps of spit-roasted lamb döner nestled into puffy flatbread or the larger tortilla-like dürüm, not to mention the array of Turkish delight at the checkout stand. Regional staples like hummus, jocoque (as labne is called in Mexico) and tabouli are available as sides, but García emphasized Kebab Nation’s global mindset and that it’s open to new entries and dietary trends, with vegan and vegetarian options intentionally offered. 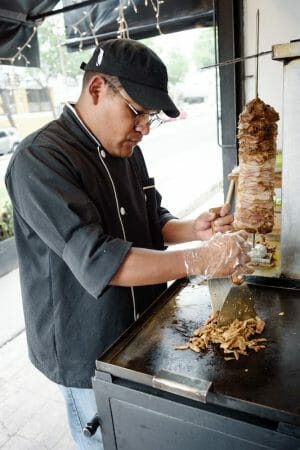 The core menu at Kebab Nation is an elegant 5×5 matrix where you can select your bread for the wrap and toss in five fillings. The bread options include pita-like pocketbreads, as well as a flatbread akin to Iranian barbari and the granddaddy-of-them-all dürüm, which by itself makes a hearty meal for two.
Your options for fillings include fresh, crispy falafel, which García promises are vegan; the trompo árabe, a combo of subtly spiced beef and pork cooked on a vertical spit, al pastor (or, depending on your point of view, shwarma) style; and your more straightforward beef and chicken, cooked a la plancha on the flattop grill, largely in line with what you’ll find in tacos de pollo or tacos de res at a decent street stand. At the high end of the menu, Kebab Nation offers one final, mouth-watering option: the cordero, or lamb, also cooked a la plancha. It took García and company five years to find the right provider for their locally sourced, farm-raised cordero. They use a 24-spice blend, including a number of imported seasonings, to get it just how they like it.

Even the most expensive selection, the cordero served in the massive dürüm, comes out to only 145 pesos. This is really an outstanding price when you take into account proportions and quality, even by food stall standards ­– which, in Mexico, are among the best in the world. Go nuts and make it a combo with home-style potato chips and fresh aguas frescas for 35 pesos. (Not to worry, the Turkish-style fries come in the main wrap, and they are righteous.) The newest, most-attractive and trendy-ish places to eat in Mexico City’s hipper neighborhoods put an obnoxious premium on prices to attract “the right kind of people.” Kebab Nation just doesn’t hear that noise, and we appreciate this deeply.

Others seem to be just as appreciative. The owners kicked off a second location in June 2018, further south in the city’s Nápoles neighborhood, not far from Mexico’s World Trade Center. It is five times larger and can handle up to 60 diners. García and his partners are already looking for a third venue.

(Note: For art lovers, there are two exceptional venues near Kebab Nation’s San Miguel Chapultepec. Kurimanzutto, just blocks north of the restaurant, has established itself as one of the most important galleries in Latin America (Gobernador Rafael Rebollar 94). Just to the west of San Miguel Chapultepec is the Casa Luis Barragan, a true masterpiece of architecture and design that has opened to the public for tours (Gral. Francisco Ramírez 12-14).)

This article was originally published on May 8, 2019.

Add to favorites
By
James Young
, photos by
PJ Rountree

Mexico City | By Susannah Rigg
By Susannah Rigg
Mexico CityIt wasn’t very long ago that finding a vegan restaurant in Mexico City was like finding a friend on the city’s overcrowded metro during rush hour (read: impossible). In fact, until this decade there were no exclusively vegan eateries in Mexico’s bustling capital. This is not to suggest that vegan options weren’t available, but exploring…
Kebab Nation
Gobernador Agustín Vicente Eguia 40 Local A. San Miguel Chapultepec
Tel. +52 556 728 6433
kebabnation.mx
Hours: Mon.-Sat. noon-9pm; Sun. noon-7pm