We bit into the khinkali, its handmade dough indelicate and sticky, as we like it. Steam poured out the newly made hole, and we blew lightly before slurping up the rich stock and gobbling the dumpling down, even the puckered knob. The ground pork and beef was packed with fresh cilantro, the juices absorbed into the jacket. It was a perfect khinkali. A home wrecker.

This seducer of a dumpling is molded by the knowing hands of Manana Osapashvili, born in Gudamakhari, a mountain village in Pasanauri, the heartland of khinkali. A professional cook for 29 years, Manana has been making khinkali since she was 10 years old. Today, she is running the kitchen at Sioni 13, located at the Tbilisi Theological Seminary in Old Town. It is a part of the city known for its tourists and hookah bars, and the mediocre “traditionnel” Georgian restaurants that cater to them.

“Lots of tourists are coming and don’t know what Georgian food should taste like,” Manana explains. “Other places around here aren’t bad, the food is just not as it should be,” she adds, summing up much of the Georgian dining experience in a nutshell. 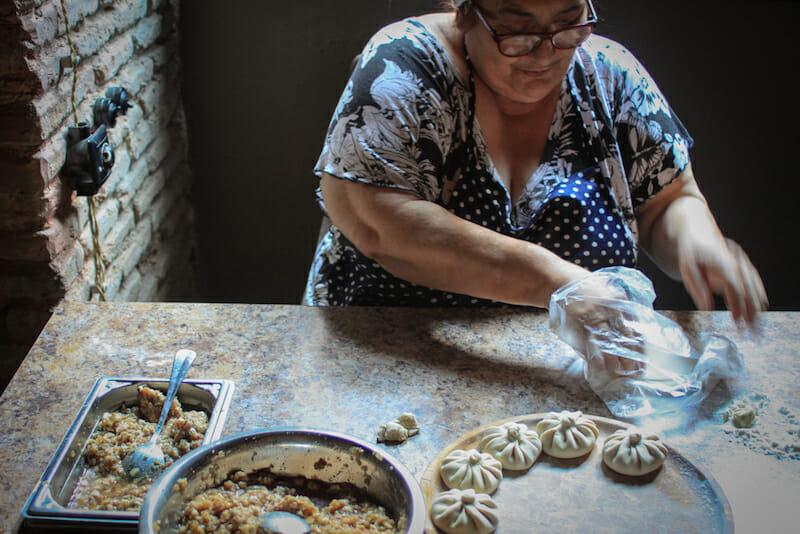 We first tasted Manana’s cooking several years ago, when she was cheffing at Duqani, a basement restaurant near the Opera House. Her simple, seductive food attracted a strong following of local foodies who appreciated her Midas touch on dishes they had been eating all their lives, but never really tasted. When co-owner of Duqani, David (Dato) Natadze, sold his shares earlier this year, he invited Manana to join him at Sioni 13, which has only been open a few months.

The restaurant is a classy space of raw 19th century brick walls and an open kitchen, a balanced blend of traditional and contemporary ambiance. Tables on the cobblestone street can get lots of sun in the daytime, but are a fine place to sit in the evening to watch people beeline with their selfie sticks or hear the cool tunes from the jazz cafe across the street. What’s missing is the sign with pictures and prices of the menu by the door and the shill trying to hustle people inside.

“I hate that,” Dato says of the annoying practice between puffs of a small cigar. Although tourists are obviously the target clientele, his main aim is to attract Georgians. “It’s difficult to bring locals to this location, but I want to break that trend,” he asserts.

We bit into the khinkali, its handmade dough indelicate and sticky, as we like it. Steam poured out the newly made hole, and we blew lightly before slurping up the rich stock and gobbling the dumpling down, even the puckered knob.

With 20 years in the restaurant business, Dato is more than capable of achieving his goal. Unlike most places in the neighborhood, his prices are friendly, as are his staff. The menu is tuned down to a healthy handful of courses and, an added bonus for tourists who order khinkali is an invitation to watch Manana construct them at her large work-table – with an opportunity to try their luck at folding one up, too.

Everything on the menu beckons us, but first we try the kabob, which is a great way to test a restaurant. Does the kitchen cut back on the quality of meat? Does it stretch the portion by adding lots of bread crumbs? Is it under or over cooked? Kabob is a simple dish that many cooks don’t take seriously, but Manana makes it as if each order was prepared for a VIP: a perfect blend of pork, beef and chicken spiced with red and black pepper, onion and cilantro. There’s enough grease to keep your lips wet, but not enough to easily stain your shirt. We like that. 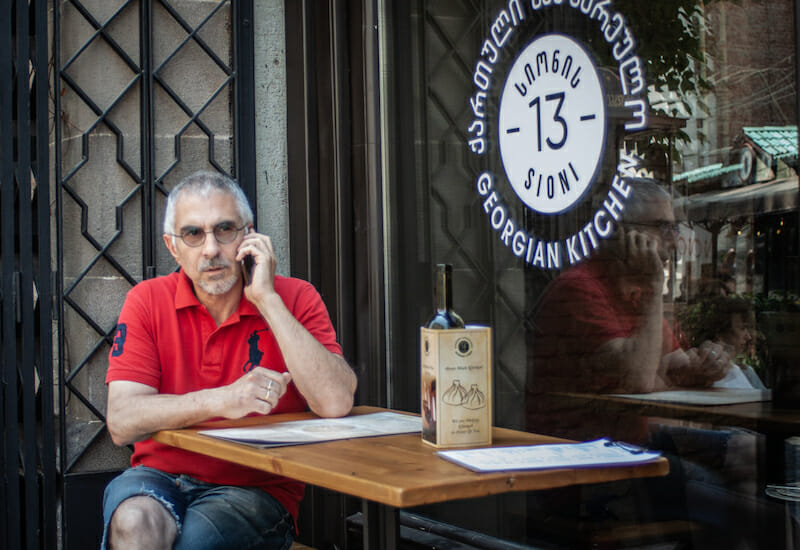 Because Manana is a Pasanauri native, we had to try her phklovani, the region’s greens-stuffed cheese bread. Manana’s is loaded with sautéed onions, fresh beet leaves, cilantro and cheese, which she lightly pan fries into the kind of zesty pie you are served at home, not at a restaurant. We look forward to returning soon to go through the rest of the menu, but now we have straightened our backs and rubbed our hands on our pants before sprinkling black pepper on Manana’s Pasanauri style khinkali, made from her old family recipe of pork, beef, onion and wild cumin. We bite, blow, suck and devour an eye-rolling richness that urges us to divorce our former favorite khinkali joint.

At a time when eateries are moving towards being more creative with Georgian cuisine, it is refreshing to see a new place open up doing tradition with integrity. Manana is not against so-called fusion and believes “any culinary progress is good,” but she adds with a sparkle in her eyes, “you can’t forget old recipes. They are our culture.”