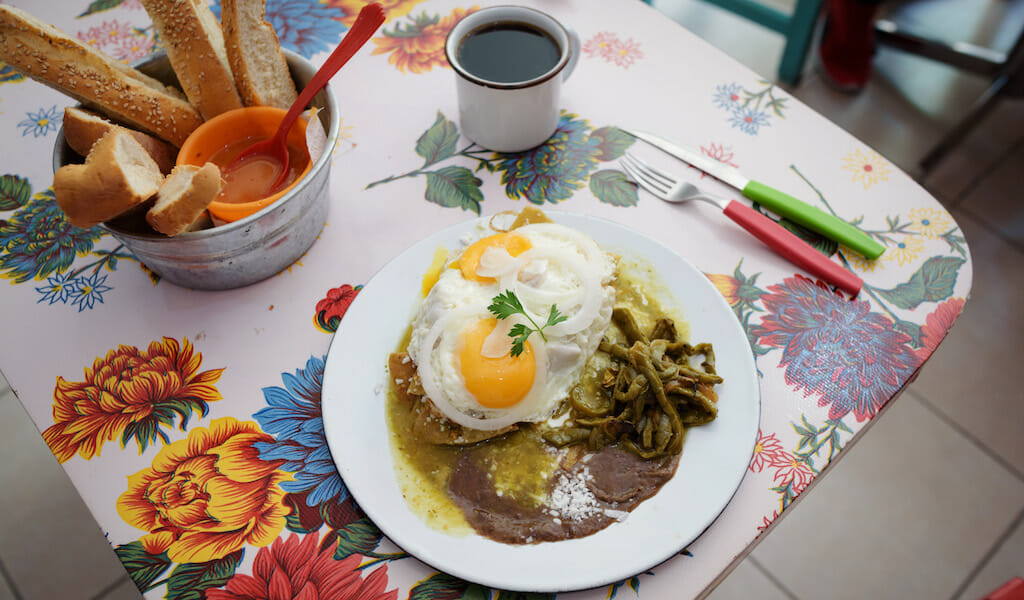 When Brenda Miranda and her partners started Chilakillers seven years ago, it was on a lark. They were freelancers – like so many young professionals in Mexico City – who needed some extra cash and thought, “Who doesn’t love chilaquiles?”

The only problem? None of them had much experience in the kitchen.

But the mother of Brenda’s ex agreed to give them her salsa secrets – verde, mole, refried beans with chipotle, and a super spicy version (to which they would later add an avocado salsa and a vegan salsa). Plus, while Brenda may not have cooked much growing up, she did know meat – her father worked as a butcher all through her childhood in Mexico City’s Obrera neighborhood. 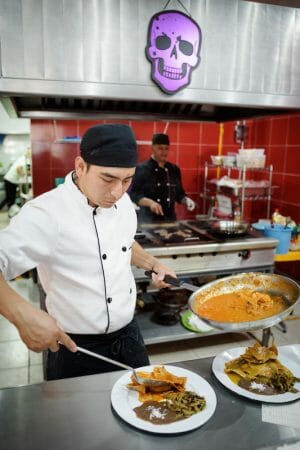 In their original tiny space in Tacubaya they first envisioned tortas de chilaquiles to go, a kind of chilaquiles sandwich popular on the streets of the capital as a morning snack on the run. “We brought pots and pans from home, I was in the back washing dishes, it was a super basic set-up,” says Miranda. They landed on a full menu of chilaquiles (and tortas) and eventually added molletes and eggs.

Despite their inexperience, their chilaquiles, mountains of fried tortillas drenched in salsa and topped with tender arrachera, salty cecina, or whole roasted chicken breast, were a hit. “People come back again and again because they love the flavor. We haven’t changed a thing in the recipes in the past seven years, they continue to be as good as they were at the beginning,” says Miranda.

They quickly gained a following as the place for chilaquiles in that part of the city. Friends would ask friends, “Have you been to Chilakillers yet?” A line began forming out the door on weekends, sometimes with a wait time of up to an hour; pretty soon they were packed every day from the time they opened at 9 a.m. to closing at 5 p.m.

It wasn’t just the delicious chilaquiles that people were coming for. The place itself was full of kitschy Mexican décor: wall murals, shadowboxes and classic Catrina skeletons everywhere. It became a hangout, a cool spot, but one that’s more fun and punk than hipster, Miranda insists.

The portions are no joke, perfect for soaking up a hangover or feeding you for 24 hours.

“People come just as often to take pictures as they do to eat chilaquiles!” she laughs.

The wild success of their spot in Tacubaya made the team rethink Chilakillers as just a side project. It was starting to feel like a proper business, and they wanted to expand. Colonia Santa Maria de Ribera was their next stop.

Walking into their new location on Santa Maria de Ribera Avenue, you are bombarded by colors and lights. Murals by the graffiti artists Ofier and Gatobanton adorn the walls, colored lights twinkle around a Chilakillers sign, and a life-size skeleton sits all the way in the back eating breakfast at a table for one. This space is double the size of the locale in Tacubaya and while the neighborhood initially resisted their opening (Santa Maria is known for its strong protest of any perceived gentrification in neighborhood), they’re slowly winning locals over – there’s now a line out the door on weekends. 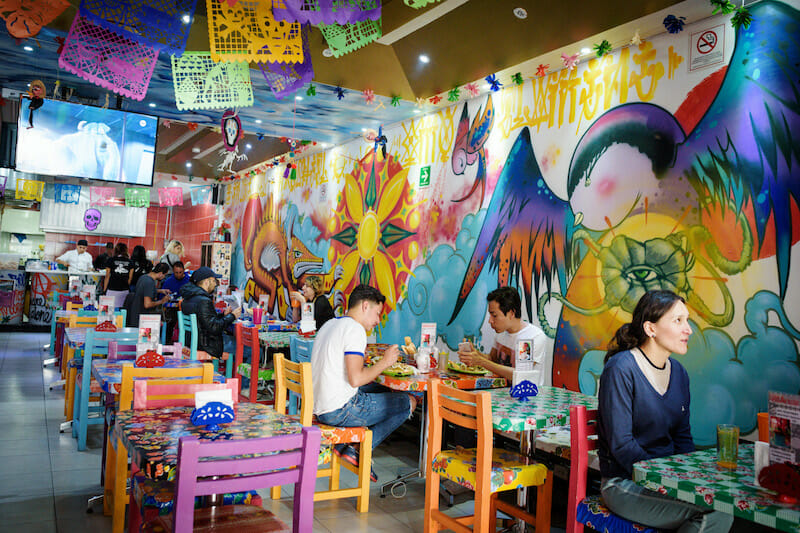 What’s more than likely is that this new location is going to be an even greater success than the first due to a fiery new item on the menu – mezcal. They have created the ultimate hangover cure with a version of café con piquete, sweet and cinnamon café de olla with a shot of smoky mezcal. It grabs your throat like a baby pulling your hair and doesn’t let go. You might need one or two to get through the kilogram (that’s right, an entire kilo) of food involved in the grande size chilaquiles plate.

There are seven proteins to choose from – chicken, beef, pork ribs, chorizo, arracherra, cecina or egg – or you can get a vegan version. Of the six salsas, verde is the most popular, Miranda reports, but the three-pepper super spicy salsa and the velvety sweet mole are close seconds.

Each weekend they have a new special on the board – cilantro salsa with cochinita pibil, hibiscus salsa with suadero and recently a pozole version of chilaquiles.

Whatever you choose, make sure to come with an empty stomach – the portions are no joke, perfect for soaking up a hangover or feeding you for 24 hours.

What’s next for the Chilakillers dream team? One group wants to move to L.A. and start a chilaquiles food truck; another is hoping to set up a Chilakillers on the beach in the Yucatán. At some point Chilakillers might be everywhere you look. For now find them in Tacubaya and Santa Maria Ribera, where you can feed your need for great breakfast chilaquiles. 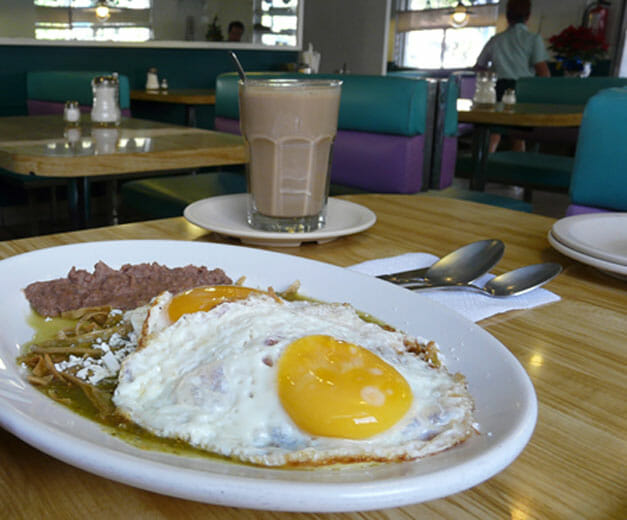