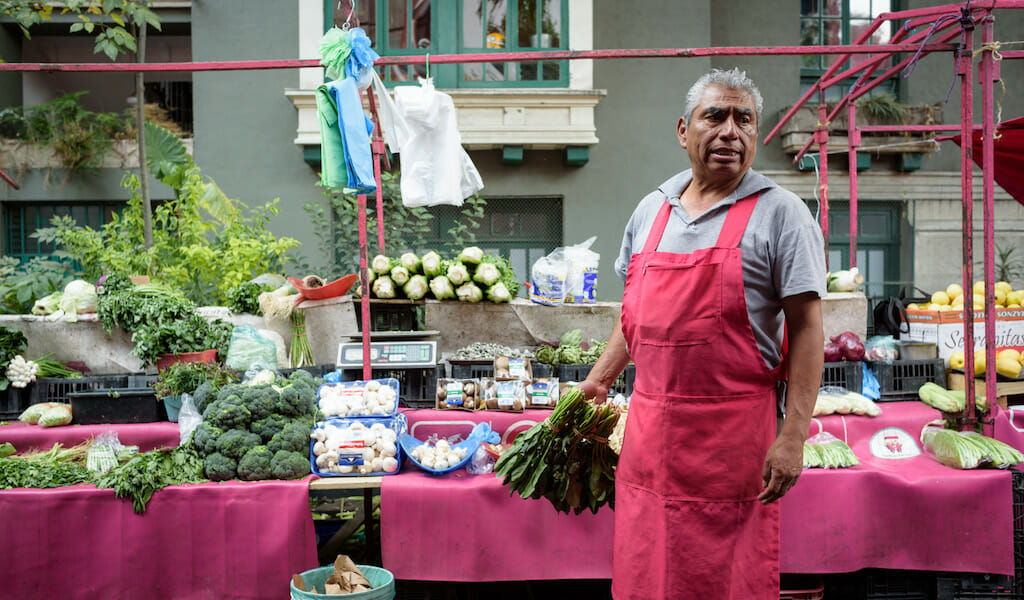 Spring Surprises: Treasures of the Tianguis in Mexico City

Being the geographic dead center of the country, Mexico City is the hub for all produce heading in any direction. In other words, all roads lead to the sprawling Central de Abastos, the distribution center and wholesaler in the south of the city.

“Spring” here is the dry season – the temperatures get hotter by the day until May, even June, when the rainy season begins – but conventional produce is always in season somewhere in Mexico, no matter how parched Mexico City itself might be. But say you’re looking to stick to a “100-mile diet” – surrounding the city there are fertile soils of volcanic valleys as well as high desert regions. So what surprises do they offer in spring? 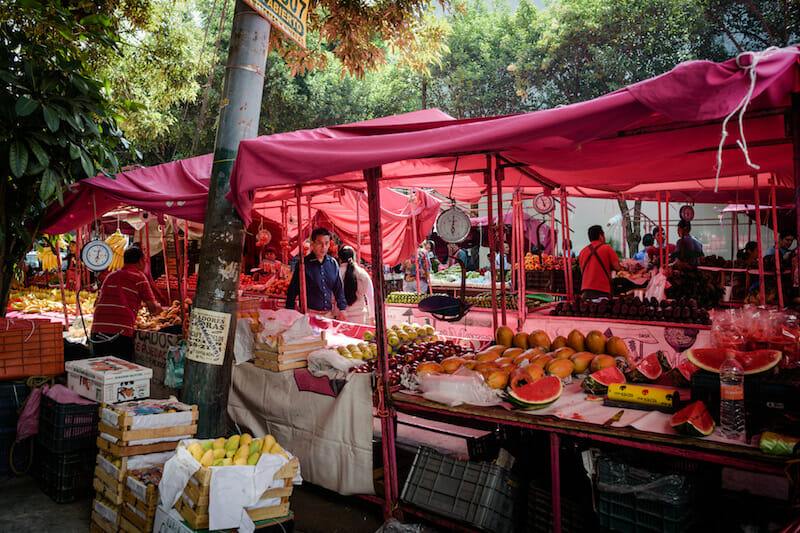 The best place to find that out is at the city’s open-air markets, called tianguis (tehYAN-gyez), which have their roots in the Aztec Empire (the word tianguis comes from tianquiztli in Náhuatl, the language of the Aztecs) and have been in almost continual existence in Mexico since then. Bringing food and essential products to the people was, of course, an essential practice, but the survival of this tradition is as much due to its role as a social and community activity.

Today, anything that is portable might be sold at a tianguis, from pirated videos to makeup and underwear. Some sell primarily produce, though invariably you’ll encounter stands selling those essentials that female customers need – for efficiency’s sake, no doubt.

The tianguis have their roots in the Aztec Empire and have been in almost continual existence in Mexico since then.

Markets of this sort pop up weekly around Mexico City. A government-run organization regulates what they call the “System of Markets on Wheels” (Sistema de Mercados Sobre Ruedas); vendors must pay a fee to participate. Bright pink tarps with the organization logo on them distinguish these tianguis as being “legit,” and the organization states on its website that about 1,500 of these markets are held weekly around the city.

Many unregulated tianguis are also semi-permanent fixtures along sidewalks or in empty lots, but it’s those that are regulated, like the Tianguis de Martes (Tuesday Tianguis) in the more affluent Condesa neighborhood, which attract customers across the economic strata.

For hyper-local produce, we visit these regulated tianguis and search out the smattering of vendors who come from pueblos outside the city jurisdiction and are not “official members.” These merchants, most often elderly women, fill out the edges and squeeze into the gaps between those approved vendors who’ll welcome them (on terms depending on the individual situation). There are always surprises to be found when you have the luck to come upon one of these vendors because in addition to what they cultivate on their milpa, a small community farming plot, some of their products will be wild foraged. 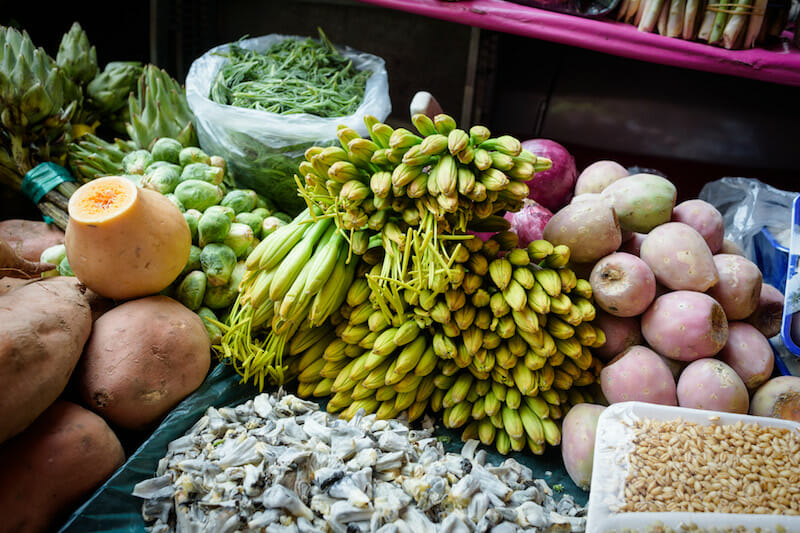 On a recent visit to the Tianguis de Martes in Condesa, which occupies three blocks around Calle Pachuca, we spotted something on the outer edges of the market that we rarely see for sale in the city: flores de maguey, or agave flowers. The agave, from which tequila and mezcal along with a variety of other products are made, flowers not annually, but only once near the end of its 10-80 year lifespan, depending on the variety and conditions. Early spring is the time for it.

Before the buds open, its towering spear-like stalk, called a quiote, is cut down and the valuable core of the plant (piña) is harvested for the production of mezcal or tequila. Like the spears of an ancient war, the stalks are left scattered on the ground. Right behind are foragers who treasure the edible buds, a delicacy that will wind up either on the plates of the indigenous poor, or on high-end tasting menus at top restaurants. 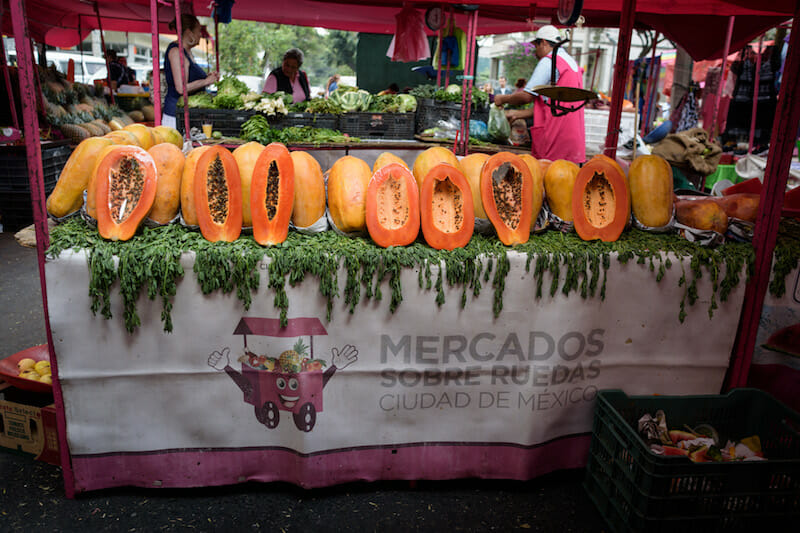 The elderly couple selling these flowers told us they came from the area around their community, a municipality north of Toluca called Ixtlahuaca. For more than 20 years, they have made the two-hour journey each way in a shared truck to this tianguis. In lieu of a stall, they make their display using upturned milk crates and a tarp to provide a smooth clean surface. It’s possible to subsist on what they alone have to offer, from fat, meaty ayocote beans to free-range ranch eggs (which make the most gorgeously golden scramble). Handmade tortillas and soft, delicately scented sweet breads made by other members of their community round out their display.

Ixtlahuaca lies in the shadow of a still active, but dormant volcano, which means rich soil for agriculture. When asked about how safe they feel, living by a volcano, the wife laughed and said, clucking: “Es muy, muy tranquilo!” Nodding to the woman beside her and still laughing, she said, “Mejor que Michoacán – allí se matan!” (“Better than Michoacán – there they kill!”) A reference to the control a drug cartel has in that state, particularly over avocados. Certainly a challenge to doing business that they are happy not to have to deal with. 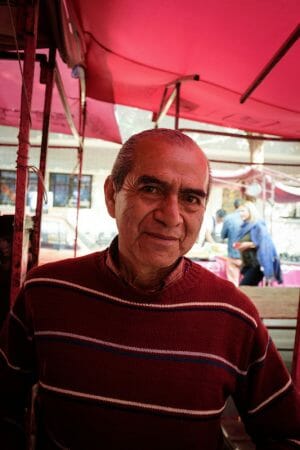 The approved vendors, found under the pink awning, also have some spring surprises in store. Take Mario Hernandez iBañez, who has spent 47 of his 73 years on the tianguis circuit. As a fee-paying member, he sets up and tears down in a different location each day of the week. It was during a recent visit to Sunday’s Sullivan Tianguis that we stopped by his stall to see what he had on offer.

Mario and his wife begin their day at 2 a.m. at the Central de Abastos – he must get there early to claim choice goods from his suppliers. He’s proud to claim he was one of the first tianguis vendors to stray from the familiar Mexican ingredients and offer such “exotics” as Napa cabbage, okra and kale to local customers. Mario emphasizes that much of his produce comes from the Puebla area, a state slightly southeast of Mexico City – Cholula, specifically, where he says the water is cleaner than in Xochimilco, the area of Mexico City known for its agricultural tradition.

Mario can also be counted on for big bunches of local and seasonal greens including, on our recent visit, mallow (malva) and herbs that are particular to Puebla, like papaloquelite, a distinctly medicinal herb used on the traditional cemita sandwich and sometimes found on taco stands where the entire cow, eyeballs and all, is being used – it’s said to aid in the digestion of rich meats.

At the Sunday market, Mario’s neighbor was a fruit vendor who travels along the same tianguis circuit. The delicious perfume of the approaching mango season met us as we approached. Piled in a tidy mountain were the cutest little golden Baby Ataulfo mangoes, the result of failed attempts (or a happy accident?) in creating the Ataulfo cultivar (stunted trees bring stunted fruit). There were also uncultivated criollo mangos, which have no value on the export market. One diminutive variety of these mangos is sold while green – tart, these are often cooked with sugar, or given the “lime and chile” treatment. Otherwise, they ripen to a messy combo of sticky juice, cheesecloth-like fiber and an unreasonably large stone. On the other end of the size spectrum, there was the large Paraiso, a dusty green variety, blushed with golden orange and red, which many vendors might call “Oro.” Then there was the Petacón – the name refers to a “big bottom” – related to both the prized Kent and Tommy Atkins varieties.

When asked what fruits he’ll have in the coming month he told us: “Muchos tipos de ciruelas.” These many types of ciruelas, or plums, include golden spheres the size of cherry tomatoes and the ovoid red, orange and green splotchy jocote. The latter, a native plum also known as ciruela huesito, has a unique and delicious flavor – think creamy pineapple-banana – and an extra-large hueso, the stone inside, which accounts for 50 percent of its volume.

These markets begin winding down around 4 p.m., when one of the weary vendors – whoever is most ready for it that particular day – decides to initiate the end-of-day teardown. Some bartering goes on – exchanges between vendors as well as local regulars who come to collect the spoils. Many, like Mario, have by now been up and going for 14 hours and are eager to rest. By 6 p.m., they all roll away, most facing a long journey home through the chaos of Mexico City and another morning that will come very soon.