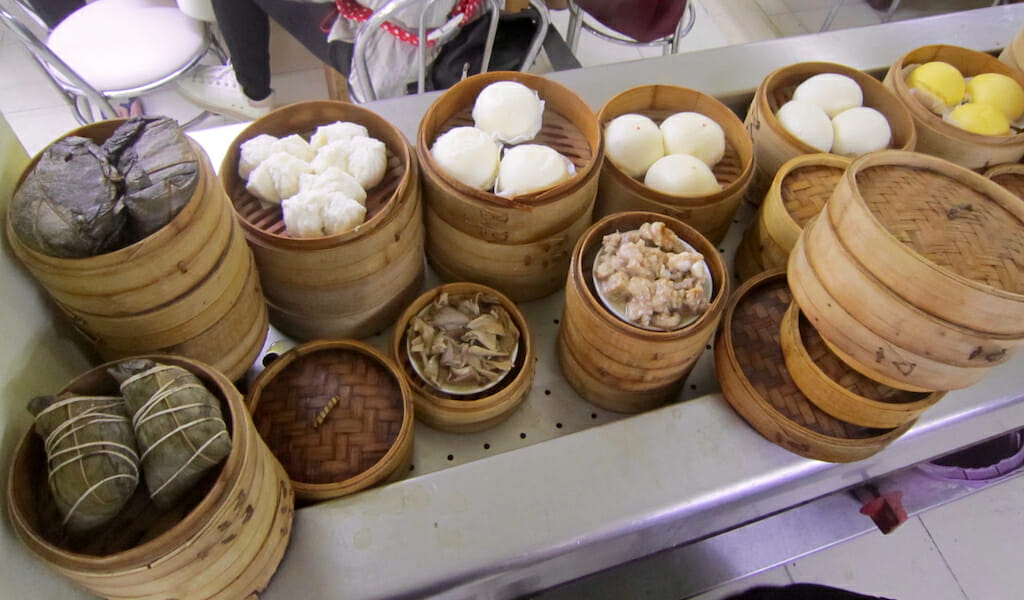 Before we got down to the business of food, there was the business of tea. As soon as we were seated at one of the large round tables at Jing Teng in Mexico City’s Viaducto Piedad neighborhood, our server, Montse, placed a pot of piping hot red tea on the lazy Susan in front of us.

As we took our first sip, we noticed the steam billowing out of the kitchen and the chatter of Sunday morning patrons casually conversing in Cantonese in between long stares at a mounted television blasting a cable Chinese news program.

An unassuming diner, Jing Teng caters to the community of (somewhat) recently arrived immigrants from China who have settled in Viaducto Piedad, a working-class neighborhood located several metro stops to the south and east of downtown Mexico City, right in the flight path for the city’s airport.

The first major wave of Chinese immigration to Mexico began in the mid-19th century after the U.S. shut down its borders to Chinese women in 1875 and later banned immigration of both men and women from China with the 1882 Chinese Exclusion Act. After gaining a foothold in the country, that first group of about 7,000 Chinese nationals was followed by successive waves every two or three decades, with the latest arriving in the late 1990s and into the 2000s.

Natives of Hong Kong, husband-and-wife team Yan Huai Wu and Se A Yo landed in Mexico City in 2007 and opened this spot three years later, offering succor to homesick patrons and a glimpse at “real” Chinese cuisine for locals accustomed to the bastardized fare available among the red and gold chintz of downtown’s Barrio Chino, which was established in the early 20th century. 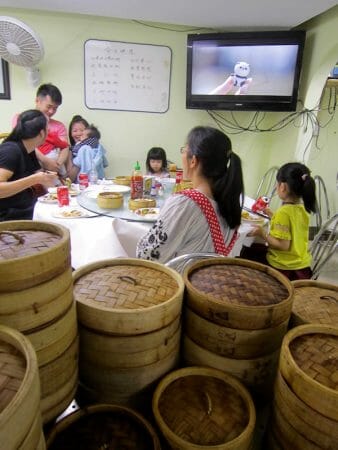 Those quotation marks around the word “real” danced in our head as we got our bearings. Wasn’t it a good sign that the place was packed with Cantonese speakers? Were we going to get to sample something – dare we think it – “authentic”?

At its noblest, perhaps, the search for authentic cuisine can be framed as an effort to find the source of the culinary river, to experience what it is about certain dishes or dining experiences that led to their propagation over time.

Having never been to Hong Kong, we found ourselves at an experiential disadvantage. How would we even know if it were the real deal? Where’s our magic cuisine detector? But whatever it is or isn’t, the idea of authenticity must somehow be connected to an individual’s first deep experiences with a cuisine, whatever that may have been, and passed then through the filters of later experiences and the tides of age and memory.

More importantly, here at Jing Teng, we would hazard a guess that the meal is no less “real deal” for the Chinese diners even though they sip their Coca-Colas and squeeze Sriracha sauce onto their plates, two non-Chinese products that only came into global ubiquity relatively recently.

Before going too far down the rabbit hole of this philosophical debate, we thought it best to try the food. After observing a young mother with a child in one arm deftly sorting through dim sum trays stacked four-high, picking and choosing with casual aplomb, we followed suit. Rifling through the baskets ourselves, we landed on pork spare ribs served in black bean sauce, and mushroom and pork dumplings, and were pleased with both; the mini-black bean clusters, in particular, packed a satisfying umami punch when paired with the ribs.

The dim sum is put out in the mornings and usually lasts until early afternoon – the earlier you go, the fresher it will be. Sundays feature specials, like roasted duck and mussels with tausi (fermented black bean) sauce.

After the dim sum we ended up ordering one of the two-person package meals from the expansive menu, which is loaded with helpful pictures that show generous portion sizes. What we got was actually more in line with the fare at most Chinese restaurants in Mexico – chicken chop suey, spring rolls, fried rice with vegetables, “BBQ” wings, cashew chicken, and chicken noodle soup. To their credit, the ingredients for all the dishes were notably fresh and carefully prepared.

Everything good and magical about a particular dish or cuisine is purely personal and experiential, and ultimately irreplicable as well.

It seems like there’s just no getting around local habits. The chop suey, for example, is a dish often reviled in foodie circles for its American origin (gasp!), but for many Mexicans a Chinese meal is not complete without it.

Along the same lines, one member of our party had to ask four times to get a lime for the soup – the relationship between lime and soup is very real and very deep for Mexicans, and she preferred no soup to soup without a squeeze of lime.

Between bites, we had Montse, who gamely agreed to be our translator, ask the owners why they came to Mexico and opened the restaurant. She reported back that more than anything it was about economic opportunity – the restaurant market in Hong Kong is highly saturated and bringing their fare to Mexico represented an opportunity to truly grow.

Montse has worked at Jing Teng for about five years and over time was able to understand spoken Cantonese, even if she’s still very tentative about speaking it. She expressed her admiration for both her bosses and seemed quite pleased for the opportunity to work there and learn.

Pleasant enough but shunning the spotlight, owners Yan Huai Wu and Se A Yo were less than enthusiastic about giving us a photo. Se A Yo flat out denied us a pic; however, she was eager to open up the dim sum baskets to create a camera-friendly display. She gave us a wink and a flourish that we interpreted as, “Spotlight goes here, thank you.”

But Montse was glad to fill in some of the context for us, adding later in an aside that the small “authentic” restaurant scene in Piedad Viaducto is actually fiercely competitive (Jing Teng contends against other spots like Chuan Yue Xian and the better-known Ka Won Seng), and that while there might appear to be a lot of solidarity among the community, there is also a lot of ambition in the picture. 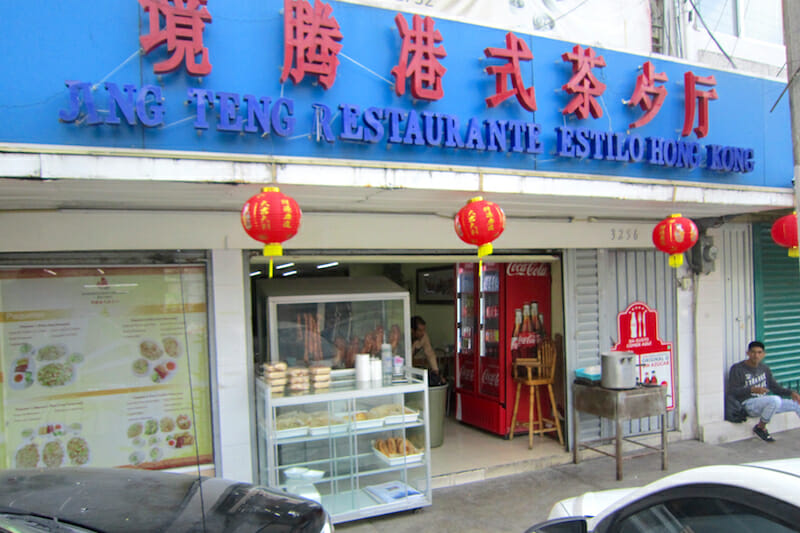 It’s no surprise then, given the stiff competition, that previous generations of family-run Chinese restaurants adapted their food to Mexican tastes in order to broaden their market. They found success by steering their menus away from dishes that they saw as veering too far from the Mexican flavor palate, and instead adopting similar spice profiles and picking up some of the grease-friendly habits of Mexican street food.

There are a handful of upscale Asian fusion restaurants in town – China Garden comes to mind – that pride themselves on authentic recipes, but these tend to go with an “exclusive exotic Asian fantasy” dining experience complete with silk robes and koi ponds.

Jing Teng, on the other hand, is sparse and unadorned, and its patrons breeze in and out in shorts and T-shirts. We felt at ease to explore here, which was comforting.

The noted columnist, journalist and editor Gustavo Arellano has skillfully decried what he calls the “fetish of authenticity.” Although admitting that he was once fanatical about authenticity, he ultimately argues that it is a useless term, and his argument is sound.

We might say, however, that authenticity is more like a mirage, always out of reach but quite real in the mind – the desire to possess a perfect recreation of experiences personal and shared. And therein it may have something of value.

We would argue the reason foodies fail in their quest is that they are looking for something external that does not – that cannot – exist. If there is any truth or reality to authenticity, then it is that everything good and magical about a particular dish or cuisine is purely personal and experiential, and ultimately irreplicable as well.

It is the amalgam of memories and associations one has with a dish, often tied to loved ones from the past, happy memories flash frozen and stacked upon one another like so many dim sum trays.

Then let us deftly move to the tray on top, the one we shared at Jing Teng. Nostalgia might have helped to make it sweeter, to experience it more as the other patrons surely did, but it certainly doesn’t discount the delicious meal we shared with friends.