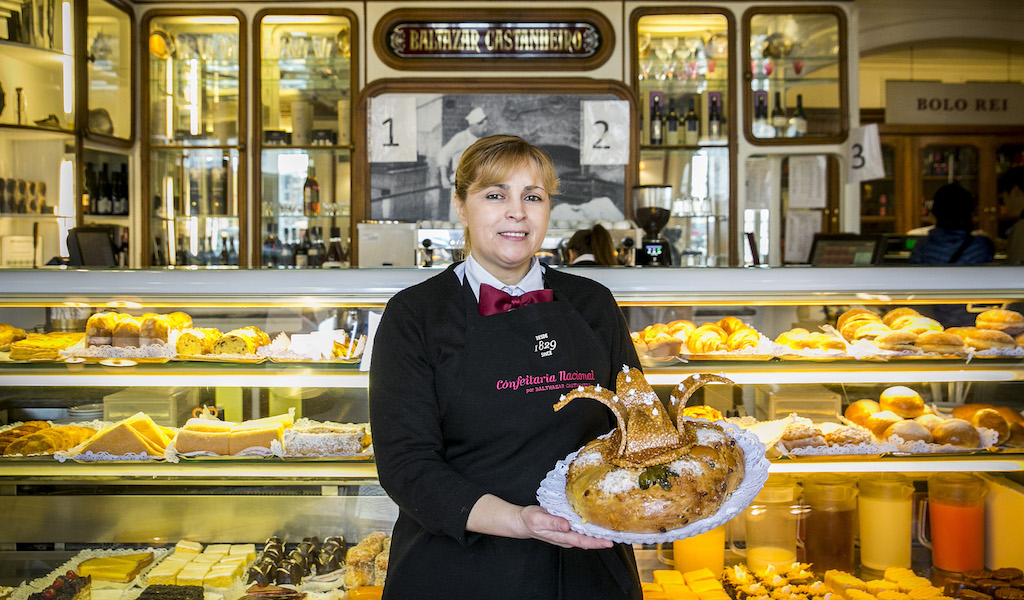 In a nation with so many baking and confectionary traditions, it’s surprising that one of the most popular cakes – the bolo-rei – was imported from another country (a sweet tooth does not discriminate, apparently). Translated as “king cake,” the bolo-rei was brought to Portugal from Toulouse, France, by one of the oldest bakeries in Lisbon, Confeitaria Nacional.

Over the years, the bolo-rei has become a staple during the festive season: ubiquitous on the table before, during and after Christmas and New Year, and certainly a must for Dia de Reis (Epiphany) on January 6, when it’s baked in its fanciest form with a nougat crown (made of caramel and almonds) and fios de ovos (“egg threads,” or eggs drawn into thin strands and boiled in sugar syrup).

Though January 6 is not an official holiday, most Portuguese will bring home a bolo-rei – either the traditional one or the one with the crown that is made especially for this day – to eat with their family. And on this day, pastelarias (patisseries) become as busy and bustling as in the lead-up to Christmas.

Similar to the ring cakes popular in France and Spain at this time of the year, the bolo-rei is a kind of brioche cake, not too sweet, covered with nuts and candid fruit, which are also mixed inside. In recent years another version made without the candied fruits and called bolo-rainha (“queen cake”) has grown in popularity. It’s a bit more expensive since it has more nuts (almonds, pine nuts, walnuts and cashews) and is sadly less colorful, but we think it tastes better without the overly sweet candied fruit. 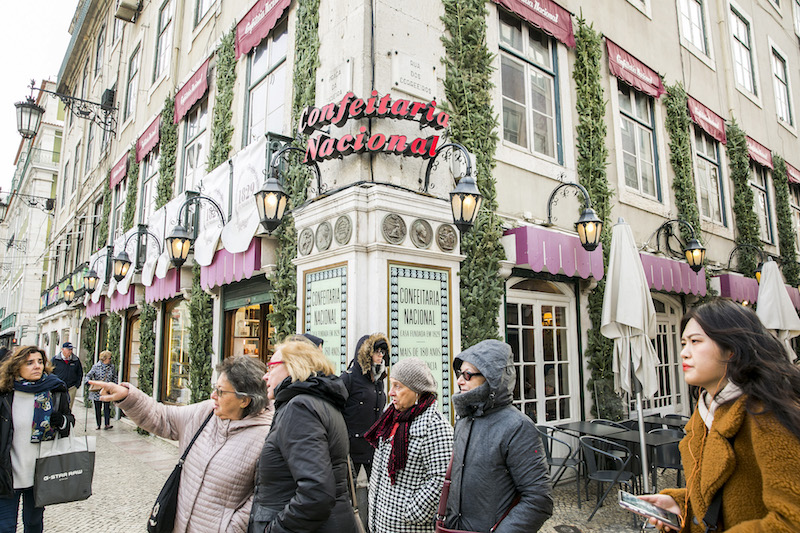 We have Confeitaria Nacional, one of the oldest bakeries in Lisbon, to thank for this Epiphany tradition. Founded by Balthazar Roiz Castanheiro in 1829, this jewel of a bakery was opened in Praça da Figueira, a large square in the central Lisbon neighborhood of Baixa, where it still stands to this day.

His youngest son, Balthazar Castanheiro Jr., succeeded him. In 1871, he had the first ever phone line installed in Lisbon, connecting the shop to the factory (urgent calls had to be made, as pastries were – and continue to be – serious business). Not long after, he brought the recipe for bolo-rei, a cake he had tasted in Toulouse during one of his many trips across Europe, back to the city, together with a pastry chef and assistant from the region.

“He brought back the gateau des rois, the recipe from Toulouse, which had a soft, bread-like dough, not the puff-pastry version from Paris,” explains Rui Viana, the sixth generation of the Castanheiro family to run the bakery.

Since its introduction at the end of the 19th century, the bolo-rei has become hugely popular not only in Lisbon but all over the country. Many other pastelarias followed Balthazar’s lead and began baking this ring cake for Christmas.

The bolo-rei also survived the fall of the Portuguese monarchy in 1910, when the republicans tried their best to rename the cake. But they eventually gave up – even a massive shift in the political system couldn’t touch the beloved cake.

The bolo-rei has become hugely popular not only in Lisbon but all over the country.

Nothing has changed since that first bolo-rei was baked in Confeitaria Nacional’s kitchen (originally in Chiado, although the factory has since moved to Campo de Ourique) – the current version is exactly the same. As with just about every successful baked good, there’s an essential component of the recipe that is kept secret, and only Rui and one chef currently know what it is.

The origin of this type of cake is believed to date back to the Romans, who allegedly celebrated the winter solstice with a cake made of dried figs, dates and honey, and a fava bean hidden inside. Later, it was baked in Catholic countries to celebrate Christmas and Epiphany.

Not surprisingly, the cake is still found in a number of places with large Catholic populations: the rosca de reyes (tortell de reis in Catalan) is commonly eaten on Epiphany in Spain and Mexico, while king cakes are popular in New Orleans, though they’re traditionally eaten a bit later, around Mardi Gras. And, of course, there are various versions in France.

Similar to the king cake found in southern France, the bolo-rei used to have a small coin or trinket baked inside (not unlike the vasilopita in Greece). “Originally our cake had a coin in it, usually a pound in gold, an idea [Balthazar] got from his trips abroad,” says Rui. “He thought it would be a good way to attract customers.” Unfortunately, the practice of adding a small trinket has been banned by the Economic and Food Safety Authority (ASAE). 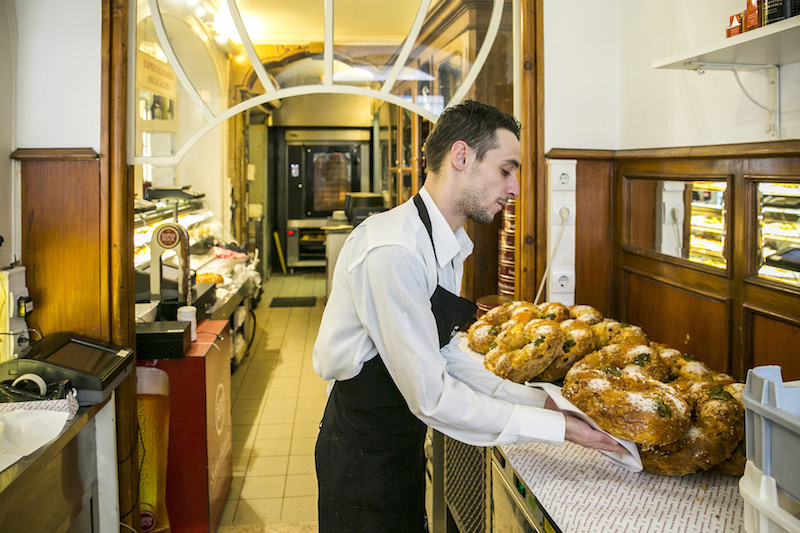 Still, even without the coin or trinket, the bolo-rei at Confeitaria Nacional is a bestseller. Every Christmas season and on January 6, lines snake out the door and around the block. The wait time for a cake in Praça da Figueira, even with lots of helpful staff on hand, can be up to an hour. The best way to avoid the lines and still get a freshly baked bolo-rei is to stop by one of the other Confeitaria shops, like in Amoreiras.

There’s a reason for this success. Rui says that his bolo-rei follows all the original and traditional baking techniques. “It takes a long time to ferment and to work the dough, and I don’t allow any changes or additives,” he says. He estimates that in the Christmas rush, they sell around 2 tons of cake per day.

If you don’t want a full cake, you can sit in the tearoom upstairs, with its original 18th-century murals and ceiling, and enjoy a slice of bolo-rei with a hot chocolate or a good galão (similar to a latte). But if you prefer something sweeter, there’s an extraordinary selection of pastries and small cakes at this historic bakery – it’s an assortment fit for a king.

This article was originally published on January 4, 2019. 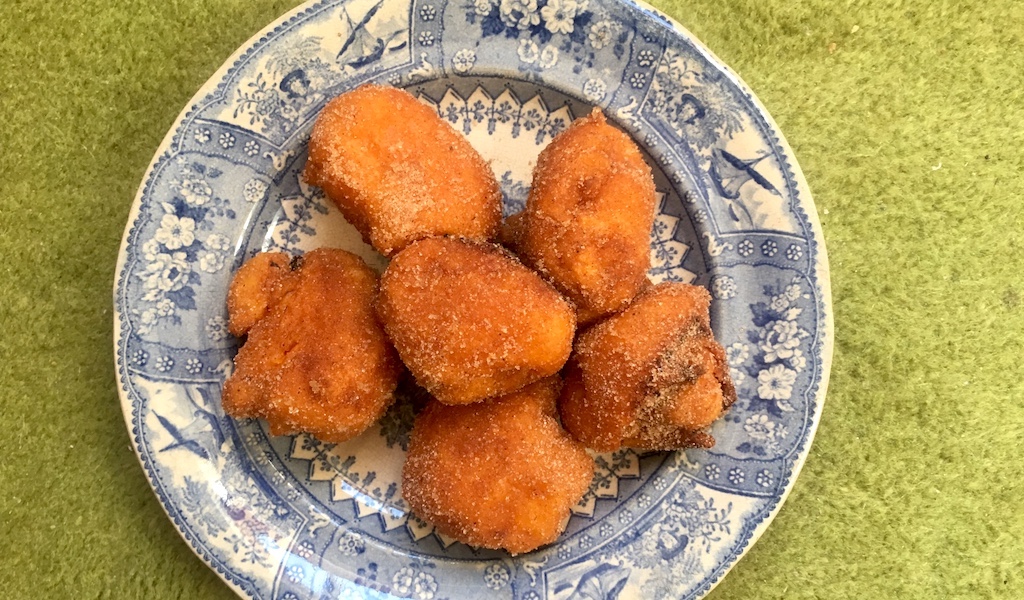 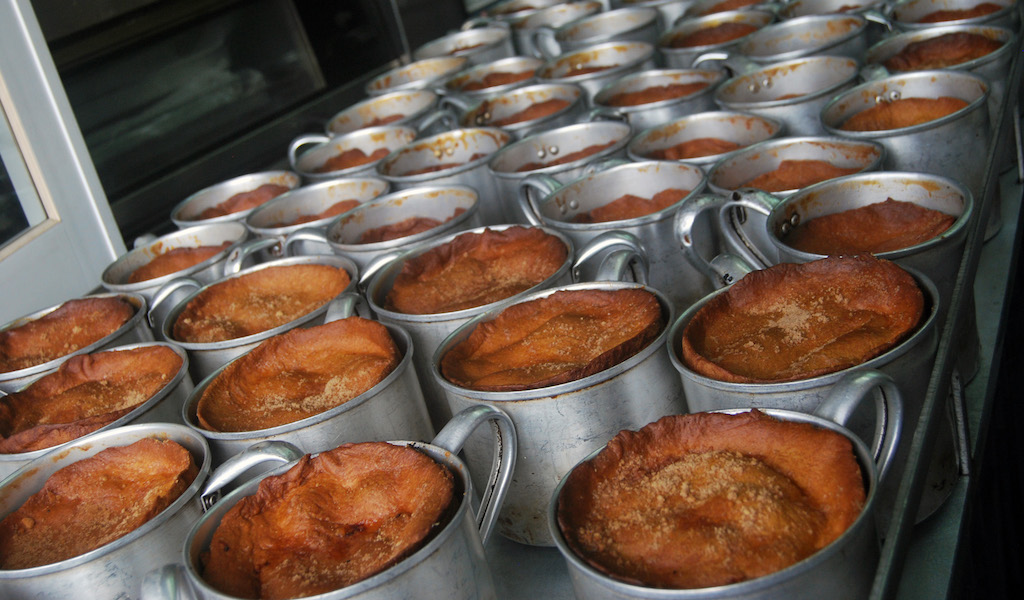 Lisbon | By Célia Pedroso
By Célia Pedroso
LisbonA visit to a pastelaria in Lisbon in the lead up to Easter brings with it new surprises. Alongside the usual pastries and cakes, you’ll spot folares, loaves of sweet bread, some topped with hardboiled eggs, and many surrounded by a colorful assortment of almonds. This type of bread, which contains ingredients forbidden during Lent,…
Confeitaria Nacional
Praça da Figueira 18B, Baixa
Tel. +351 21 342 4470
Web: www.facebook.com/confeitarianacional
Hours: 8am-8pm