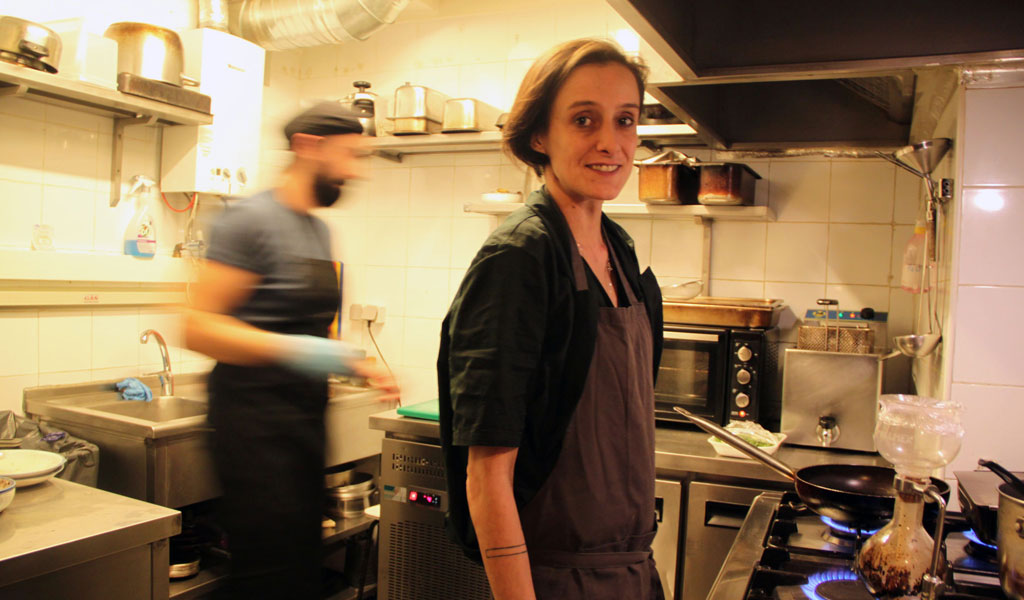 Though it’s an age-old method for preservation and flavor enhancement all over the world, the smoking of meat, fish, and cheese is not a notable tradition in southern Europe.

In Portugal, in the old days, salt curing was more common – particularly for the national staple, cod. However, the presence of smoking traditions in the north, particularly around the Minho river, indicates the possibility that the Vikings’ favorite method for cooking fish may have reached all the way to the northeastern Iberian peninsula.

Some examples of foods cooked by the smoke of burning dry, resin-poor wood include smoked allis shad, found close to Portugal’s northern border with Galicia, especially around the Douro river, as well as lamprey – a not-so-pretty but sought-after ingredient. Not far from there, in the village of Seixas, there is another little-known but long-burning tradition of smoking plaice and peixe branco seco, tiny fish caught in the Minho’s waters. Unfortunately, tasting these specialities is almost impossible outside of local seasonal fairs. 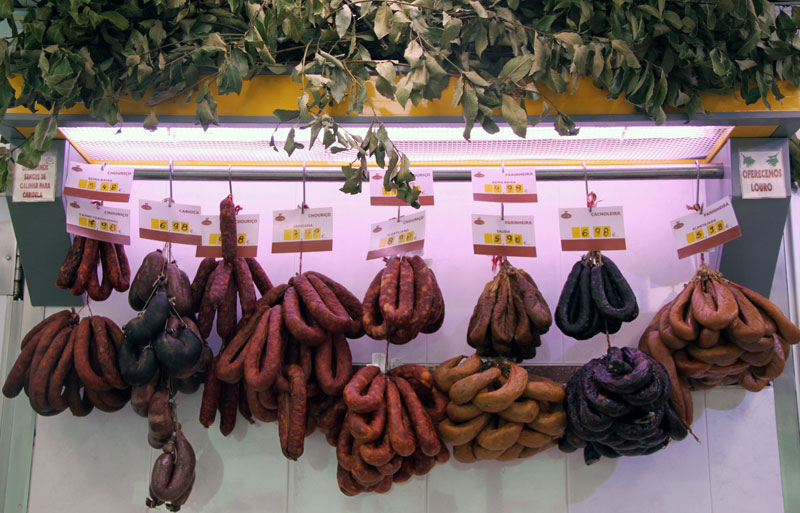 Smoked meat, however, is easier to find in Portuguese cities, including Lisbon – particularly because of the rise of gastronomic events often related to tourism. Besides the common chouriço, Bízaro ham, salpicão (pork sausage) and alheira (a kosher sausage invented by Portuguese Jews at the end of the 15th century) or butelo (meat-stuffed pork intestines that’s also composed of bones and cartilage) are unique to the country.

A few smoked cheeses also exist, but this micro-culinary category is just at the beginning of being discovered. The best way to taste these and other smoked foods is to visit the villages where they are made during one of their annual food fairs.

In the capital city, there’s one standout spot for aficionados of smoked food: Fumeiro de Santa Catarina, a tiny place with no sign located down a narrow road in Bica, close to the scenic viewpoint known as Miradouro do Adamastor.

Owner Mariana Cardoso invents experimental and modern dishes and also turns out excellent versions of the classics. She moved to Lisbon several years ago from São Paulo with a hankering for the original flavors she was brought up with (her grandparents were Portuguese expats). She decided to stay longer in this “more quiet city” and continue her passion. “I always liked to observe food preservation processes. I used to have a jam and tinned fish business.” While organizing informal supper clubs with friends, her testing of smoking techniques led her to open her own restaurant dedicated to the craft. 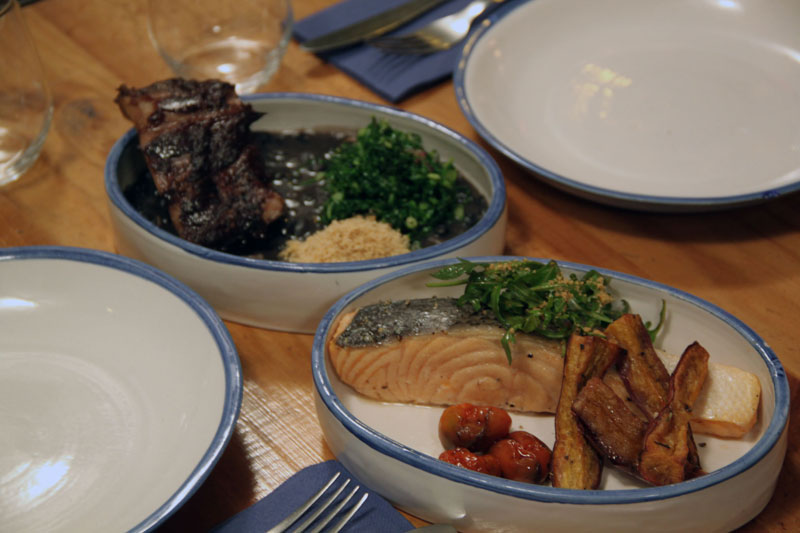 The menu at Fumeiro only has a few sharing plates that use traditionally smoked ingredients, such as bacon, chouriço and bacalhau confit, while others are smoked in the kitchen with specific tools and materials. Salmon fillet smoked with lemongrass leaves in a special box placed on the range, yellow peppers smoked with Applewood or almond cake smoked in bay leaves are some of the gourmet-sounding but simply prepared plates on offer.

Contrary to what one might expect, Fumeiro de Santa Catarina is not a smoky place; it feels more like a clean hipster cafe. The lack of fumes can be attributed to the techniques the cooks use: combustion is cold and never takes more than 20 minutes, with the ingredients absorbing the essential oils of the wood or leaves that are burned. Every material used in the smoking chamber lends a particular flavor and aroma to the food, which is why anyone working with these processes is often obsessed with wood; Mariana is probably one of the few Lisboetas who can distinguish the kinds of flavor created by a sauvignon barrel versus a whisky barrel.

Put that in your pipe and smoke it. 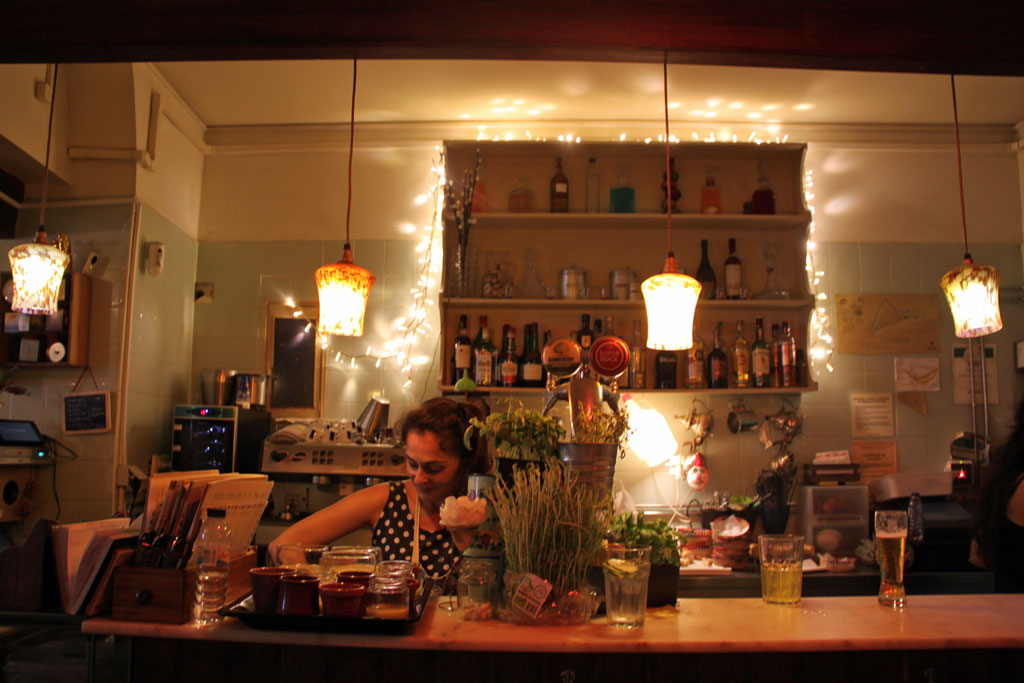 Lisbon | By Francesca Savoldi
By Francesca Savoldi
LisbonDespite being home to Lisbon’s most photographed street, Bica has maintained its close-knit-community feel, with encroaching internationalization still held at arm’s length from these bumpy cobbled lanes and steep stairways. The small residences here have generally been passed down through generations, meaning a steadfast family vibe where everyone’s laundry is, literally, there for all to…

Madrid | By Syma Tariq
By Syma Tariq
Madrid Sitting at a table in Lucio, a long-established tavern in the heart of Madrid’s most famous tapas street, is a singular experience that has a slightly surreal, Buñuel-esque touch. Queues formed of Madrid’s born-and-bred elite snake past the elegant wooden bar, the coiffed connoisseurs greeted with affection by the landlord himself as they…
Fumeiro de Santa Catarina
Travessa do Alcaíde 4C, Lisbon
Tel. +351 92 640 9775
Hours: Tues.-Sat. 7pm-12:30am