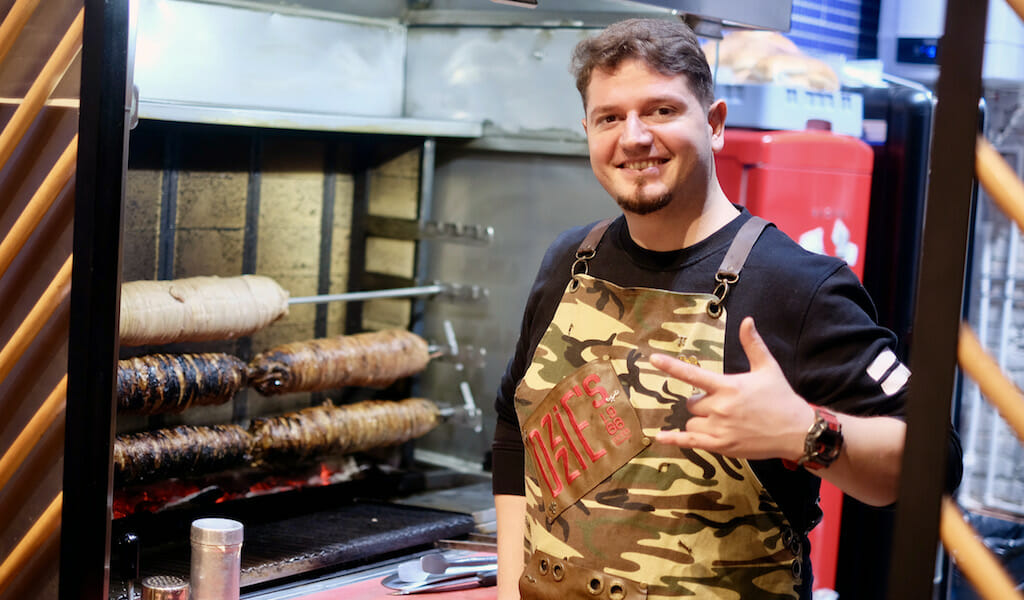 It’s just shy of noon when we step into the new location of Ozzie’s Kokoreç in Istanbul’s Asmalımescit neighborhood. Proprietor and usta Oğuzhan Sayı and his wife Gizem are preparing for another busy day in their compact, sharply-designed new restaurant.

As we begin to chat, Oğuzhan gets a call that he has to take. It’s from the Hilton, which has requested a large order of Oğuzhan’s specialty. And while kokoreç – rolled lamb intestines roasted over a spit before being chopped up, grilled and doused with a layer of herbs and spices – is primarily known as a humble street food staple, one that’s most popular among those who have had a few, we aren’t surprised at the loftiness of this order. Having had the pleasure of eating at Ozzie’s several times, we can confidently say that if the stuff found on the street or in chain restaurants is hostel-level eating, what Oğuzhan serves up is the Hilton of kokoreç: fantastic five-star fare.

The 32-year-old Oğuzhan indirectly inherited the trade from his late father, Ali, who we wrote about in 2012 and who sadly succumbed to cancer in 2015. Ali migrated to Istanbul from the eastern province of Bingöl about half a century ago and in 1968 began grilling kokoreç alongside his uncle in Beyoğlu’s iconic Çiçek Pasajı, a beautiful arcade now lined with touristy meyhanes. He then went on to open his own place down the hill in Dolapdere, today an area that, despite going through a wave of demolitions and gentrification, still has a bad reputation for crime. 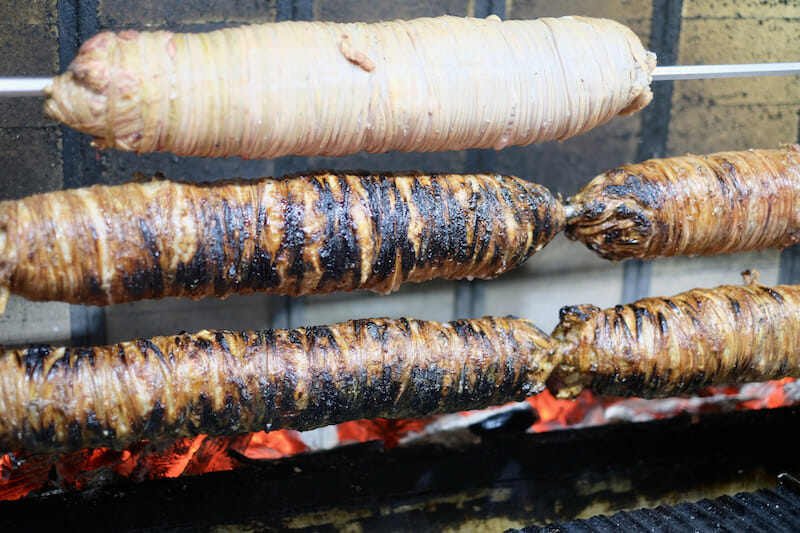 It was a different world during his father’s early years in the city. “[Dolapdere] was a beautiful place. It was 70 percent Greek and there were Roma and Armenians. There were all kinds of different people and it was the heart of commercial trade,” Oğuzhan said. But by the time Ali opened his shop, many Greeks had already left, particularly following the horrific events of September 6-7, 1955, and the Cyprus conflict in 1964. Many of the buildings in the area were left abandoned before being occupied by migrants from the southeast and eastern provinces, many fleeing the conflict between Kurdish militants and the state that raged throughout the 80s and 90s. Today, the only Greek traces left in Dolapdere are the splendid Panayia Evangelistria church and Ideal Salam, Istanbul’s sole pork butcher shop, run by the Greek Kozmaoğlu brothers.

Ali usta wanted to teach the trade to his son, but Oğuzhan wasn’t interested. He studied to become a surgical technician, and was working in an Istanbul state hospital when his father passed away. Eventually things at work soured and with the encouragement of a friend, Oğuzhan decided to immerse himself in his late father’s craft. “I switched over from humans to animals,” he said.

He consulted a number of masters that Ali mentored and claims to have put on 30 kilograms during the intense regimen of training and testing that he put himself through. Initially starting with a food cart at events and later re-opening the Dolapdere shop Ali was forced to shutter after he fell ill, Oğuzhan was successful in replicating the brilliance of his father, and Ozzie’s Kokoreç became a quick sensation. Like his old man, Oğuzhan only uses lamb intestines wrapped by hand around lamb sweetbreads. “Preparing it by hand requires cleaning, which is very detail-oriented, tiring and expensive,” he said of the process. The vast majority of kokoreç in Istanbul is made from beef, rather than lamb, and is not hand-rolled.

Oğuzhan was successful in replicating the brilliance of his father, and Ozzie’s Kokoreç became a quick sensation.

His efforts did not fall on deaf ears, and the small Dolapdere shop has been written up by a stream of journalists including Turkey’s most popular food writer, Vedat Milor, who declared Ozzie’s Kokoreç to be the best he’s ever eaten in Istanbul, no small accolade coming from the distinguished Milor.

Despite the hype, Oğuzhan realized it was time to leave Dolapdere. Numerous construction projects have blighted the area, including one in neighboring Tarlabaşı that has dragged on at a snail’s pace for nearly seven years. In August, Ozzie’s moved to its new location in Asmalımescit, though Oğuzhan refuses to sell his father’s old shop in a historic Greek building, which his family still owns. The new, more logical location in Asmalımescit, just steps away from the Tünel funicular and the Şişhane metro station, has been instrumental in bringing in an influx of new customers, ensuring that the place is packed throughout business hours, where supplies sometimes run out before closing time.

Every successful person is surrounded by a mob of unruly haters, and Oğuzhan is no exception. In a post-modern world of Yelp reviews and online food delivery services, where ratings are crucial, opportunists and trolls have become a thorn in the side of restaurateurs. “There are people who write bad reviews solely for the purpose of getting free food,” said Oğuzhan. What’s more is that he adheres to a reservation-only policy, which has ruffled many a feather. 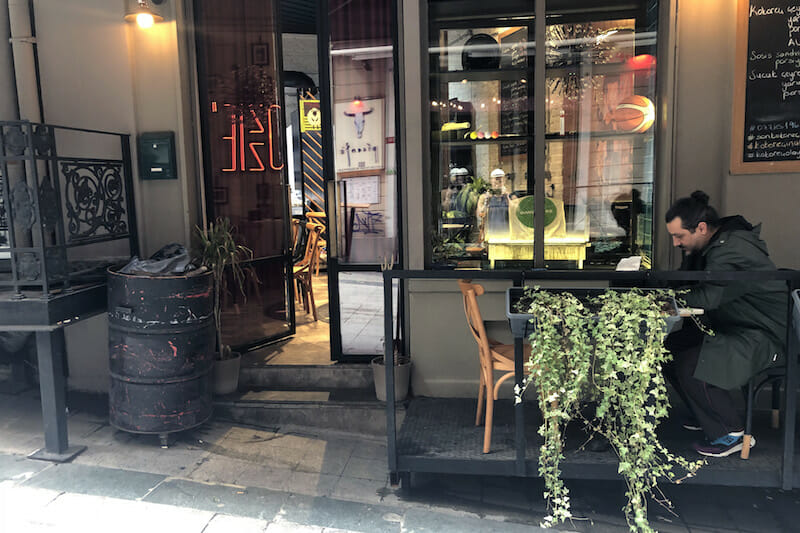 The strict reservation requirement has solicited complaints, though it is not the product of snobbery or elitism; to the contrary, it is part of a system that ensures Oğuzhan knows exactly how much product to have on hand, since his kokoreç is hand-rolled and not pre-assembled and frozen, like practically every other kokoreç joint in the city. His wife, Gizem, is the only other employee on the floor, and she runs a tight ship while taking phone calls, running orders and seating guests. Apart from the kokoreç, they serve their own sosis (sausage) and sucuk (Middle Eastern garlic sausage), which goes great with a dazzle of house-made spicy mustard.

On our first visit, we arrived about half an hour late, and were told that we would have to wait. This was not a problem – we were late, after all – and we appreciated being seated in spite of being so tardy. Another group of customers also came in late and were informed that they would also have to be patient. This wasn’t received well and they launched into a flurry of rude remarks. Eventually, Oğuzhan emerged from the kitchen and told them that they would not be served and that they had to leave immediately. A shouting match ensued, but Oğuzhan stood his ground and booted the lot.

They left hungry, while we patiently waited and proceeded to get our hands on a portion of those glorious guts, from which emanated smoky, gamey and earthy flavors. We devoured every last bit. Ozzie’s may require reservations, but we certainly have none when it comes to the little eatery’s somewhat eccentric ways – the payoff is worth it.