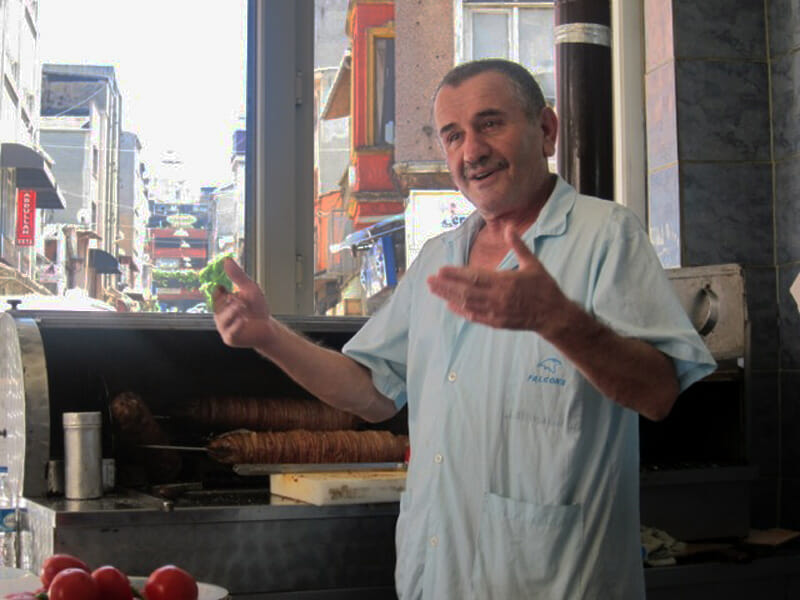 Editor note: We are deeply saddened to report that Ali usta succumbed to cancer in 2015 and his shop has closed. But his son Oğuzhan continues the tradition with Ozzie’s Kokoreç in the nearby Asmalımescit neighborhood.

Recently, while continuing our research into how kokoreç (grilled lamb intestines) became a fast-food staple in Istanbul, we were told by our favorite kelleci (vendor of cooked sheep’s head), Muammer usta, about one of the oldest kokoreç masters around. Ali usta’s shop is in Dolapdere, down the hill from the Tarlabaşı Sunday market and just past a large plane tree that is a neighborhood landmark, standing among tiny workshops, furniture depots and decrepit old residential buildings.

We’d come here to better understand the background of kokoreç culture in Istanbul: how and when it changed from a dubious street food into a widely loved fast food. With almost 50 years of hands-on kokoreç experience, Ali usta is one of the few resources on the subject. As he explains, in late 1960s Istanbul, kokoreç – made by wrapping stringy, springy lamb intestines around a core of skewered sweetbreads or other offal – was a street food delicacy loved by a few but not yet discovered by the masses. Of course, the masses had not yet arrived. Today Istanbul has a population of some 15 million hungry souls, but in 1968, it was a city of only one or two million people. “You didn’t find kokoreç on every corner but those who knew it, ate it,” Ali usta said.

The craft of kokoreç-making was traditionally the livelihood of a small guild whose origins, curiously, lie in the Balkans. For most of the 20th century, Turkish citizens of Albanian ancestry have had a strong presence in Istanbul’s slaughterhouses and, more specifically, in organ butchery, a role that extended to production as well. (The street food specialty Arnavut ciğeri, or Albanian liver, got its name not because it is an Albanian import but because it was sold on the street by Albanians. The word kokoreç most likely comes from the Albanian word kukurec.)

“There was Süleyman usta working in the garden of the Bomonti Beer factory. In the Çiçek Pasajı in Beyoğlu there was Behçet usta, an Albanian, and my uncle Mehmet the Kurd, who was not Kurdish, in fact, just dark-skinned. My uncle worked alongside Lazaros, an Albanian from Macedonia,” Ali usta recalled. He told us that during the ’60s and ’70s, kokoreç peddling was just the front end of a business whose backside was in the slaughterhouses in Sütlüce on the Golden Horn.

“During the day we’d go around with a basket of sliced bread and a cooked roll of kokoreç, selling it on the street. In the season, we had a little workshop near the slaughterhouses. In May, when they were butchering lamb, we’d work until three or four in the morning cleaning and wrapping kokoreç into rolls.” Ali usta speaks of that period with nostalgia. Wrapping your own kokoreç, to him at least, is how an usta proves his chops. In the same way that handmade pasta bears the stamp of the maker, kokoreç too had greater variation in those pre-industrial days. A man really had to be an usta (or “master”) to turn the raw material into a fine product.

But the conditions were less than ideal. “In Sütlüce you had people cleaning kokoreç under the stairs. It was not hygienic,” said Şeref Acehan, a third-generation organ butcher, also of Albanian descent, who runs a meat shop in the Beyoğlu Fish Market. “Kokoreç needs to be cleaned really well. You understand? Look, I sell the stuff, but I won’t eat it out and I wouldn’t feed it to my kids,” he added.

According to Şeref Bey, in Sütlüce in the 1970s, kokoreç was almost considered a discard and could be bought very cheaply from livestock brokers: “The livestock would be slaughtered and the butchers would come and write their number on the carcass they wanted. But before that, we [the organ butchers] and the kokoreççiler and the tanners would come and buy our materials.” The small cadre of Istanbul kokoreç sellers survived on the availability of castoff intestines. Supply met demand without a middleman. If you were willing to get your hands dirty and work hard, the opportunity was right down there in the slaughterhouses on the Golden Horn. 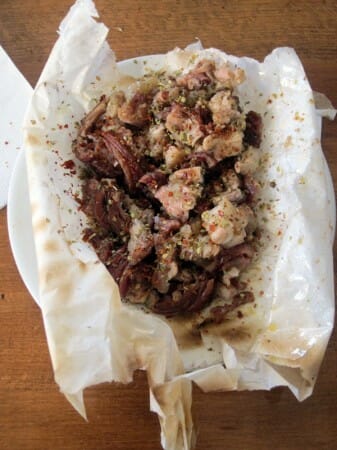 As the Sütlüce slaughterhouses came to be seen as unseemly and were eventually closed down in the 1980s (the district is now home to a convention center, although there is still a “Bloody Street” and a “Vein Street”), the ustas’ access to raw materials in their freshest state nearly disappeared. The process became industrialized and the usta was forced out of his production position and into that of mere grill man and client to food producers. Today, buying a roll of kokoreç is no different from buying a box of frozen hamburger patties: you call up the wholesaler. It can even be done online. “Any kokoreççi in Istanbul today who says he wraps his own rolls is lying. There are no kokoreç ustas left in Istanbul, just some guys working a counter,” said Ali usta.

But the stuff coming out of Ali usta’s shop nevertheless bears the mark of a true craftsman. The kokoreç is slowly turned over oak charcoal, then roughly chopped on a cutting board so well-worn that it has a deep valley running down the middle. Then, if you are lucky – as we were on one recent visit – Ali slips the heap into a parchment pouch and folds the corners closed for a quick roasting over the fire. Perhaps originally designed as a takeout vessel, this kokoreç en papier seemed very sophisticated to us. This method softened the rough edges and liquefied the fat without losing the tang of the fire. Opening the bundle, we felt as if we’d stepped into a well-stocked cigar humidor, and we dug in like connoisseurs. 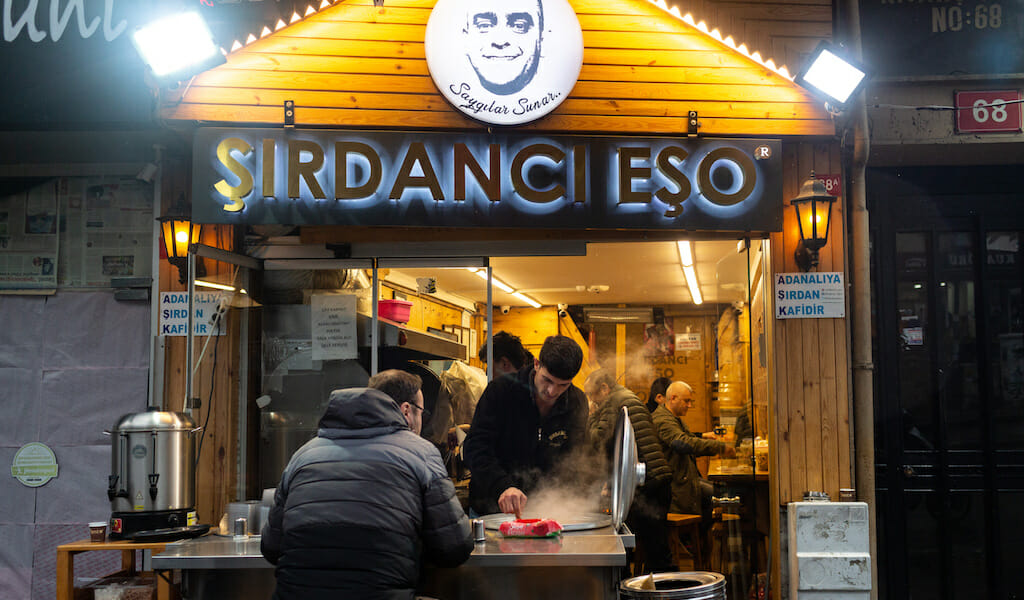 Istanbul | By Geoffrey Ballinger
By Geoffrey Ballinger
IstanbulFrom the leaf-thin fried liver of Edirne to mumbar, the spicy rice-stuffed intestines of eastern Turkey, Turkish cuisine is rich with organ meat delicacies. Sakatat, as offal is called in Turkish, is approached with a fair bit of reverence (and sometimes caution). But even the most die-hard işkembe (tripe soup) lover might shy away from…