A Greengrocer and Neighborhood Institution in Istanbul's Şişli | Culinary Backstreets 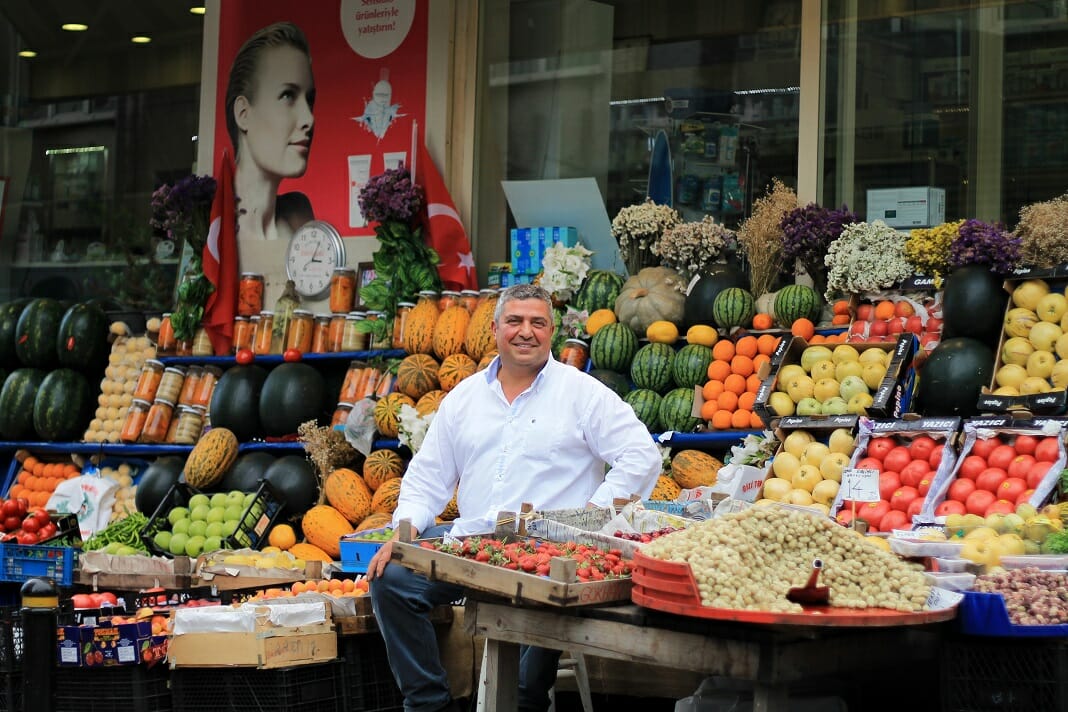 Stretching 25 feet alongside a pharmacy in the heart of Istanbul’s Şişli district, just a three-minute stroll from Osmanbey metro station (Pangaltı exit), lies Uğur’s fruit and vegetable stand. Day in and day out, come rain or shine, Uğur sits and smiles, utterly engulfed by the fruits and vegetables he sells. Hundreds of people stop by his stand every day: family, old childhood friends, local politicians, tourists. He asks them simply what they need and gracefully bags and weighs the produce on an old scale before placing it gently in their hands. He’s more than just a manav, or greengrocer; he’s an uncle for the local children passing by, a walking, talking cookbook, a neighborhood encyclopedia, a walk-by shrink. He and his brothers are part and parcel of daily life in Istanbul, flag-bearers of food tradition from days of Ottoman old.

Overflowing with produce, Uğur’s teeming stand is a succulent sight to behold, a produce eater’s paradise. Among the vibrant mosaic of fruits and vegetables are mottled “anjelika” plums of dark wine and coral, miniature pears from Izmir, speckled and striped pepino (otherwise known as sweet cucumber) and even glass jars of homemade zeytinyağlı kudret narı, a mixture of Indian bitter melon and olive oil that has medicinal properties, such as treating stomach ailments. Flowers and herbs adorn the stand and a sky-blue hand-held radio plays songs by Cem Karaca and other classic Turkish artists. 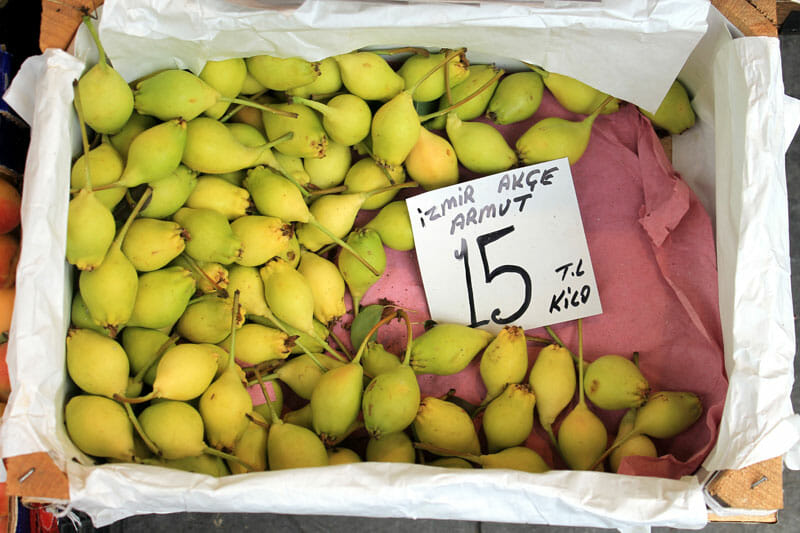 Uğur greets us with a “Hoş geldin canım benim!” – “Welcome, my dear!” – followed by a firm handshake and a warm kiss to each cheek. At first glance, you would think this middle-aged man with the quick wit was more of a mayor than a manav. Donning a pristine white oxford shirt over his modest paunch, Uğur has the slightly mischievous, broad grin of a Cheshire cat with a full set of matching pearl-white teeth, cherubic olive-toned cheeks and an infectious, mirthful laugh. It’s only when you catch a glimpse of his plump, calloused, mulberry-stained hands that you realize he actually spends his days selling fruits and vegetables.

Amidst the hustle and bustle of Şişli’s Ergenekon Caddesi, Uğur’s stand is colorfully woven into the landscape of cafés, modern supermarkets, bakeries, Roma flower peddlers, butcher shops and used electronics stores. In fact, this particular family-run greengrocer business is somewhat of a local institution; Uğur and his three older brothers, Kemal, Alaattin and Nurettin, have lived and worked in the same neighborhood, on the same street corner, for upwards of 60 years.

For Uğur and his brothers – whose ancestors migrated around 130 years ago to Istanbul from Siirt, a city in Turkey’s southeast – the greengrocer business runs in their blood. Uğur’s father worked as a wholesaler in Eminönü, the former location of Istanbul’s largest fruit and vegetable market, known as Meyvehoş or hâl (now located behind Fatih in Istanbul’s Bayrampaşa district). After a bout of financial trouble with a venture in the bus transportation business, Uğur’s father started the greengrocery anew in its current location with the help of a former wholesale partner from Eminönü. Uğur started helping out his father and brothers with the business after school during his elementary school days. 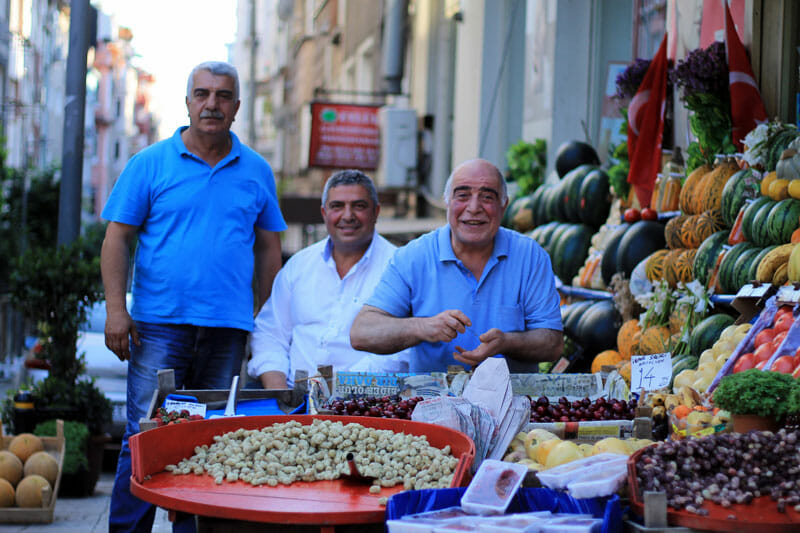 Since then, the brothers have kept the business running smoothly, owing much of their success to sülalecilik – their strong ties between family members and one another (we were told this is typical for people from Siirt). Uğur’s brothers all have distinct personalities: Kemal is the kindhearted, mustachioed curmudgeon of the bunch who speaks more with facial expressions than with words; Alaattin is the wise poet with an ever-cheery disposition; and Nurettin is the sage, soft-spoken brother who started the business with their father. Each brother plays his part: Kemal and Nurettin head to Bayrampaşa in the wee hours of the morning to gather the produce from throughout the land. There are peaches from Tarsus, sweet cherries from Kemalpaşa, apricots from Mersin, tomatoes from Izmir. While the elder brothers rest, Uğur and Alaattin set up the stand around 9 a.m., carefully arranging the fruits and vegetables in small portions. After having a late breakfast, they rearrange the stand and bring out the more sun-sensitive fruits – namely mulberries, raspberries and cherries.

“Knowing what’s fresh and in season is the most important aspect of this business. If you don’t know what you’re doing, you’ll easily get cheated by people and go bankrupt,” Uğur says as he skillfully slices us an orange, fanning the segments into a star. “There’s a saying in our trade: Sat beni, satarım seni!” (“Sell me or I’ll sell you!”) Uğur also takes note of his neighborhood’s tastes, making sure to have fresh produce such as avocado or sweet basil for his most cosmopolitan clients.

Uğur leads us to the end of his stand and into the cave-like basement of the pharmacy, which the brothers use as a multipurpose storage room. There are assorted chairs and stools, old newspapers, names and phone numbers written on the wall, a few worn tables, crates of onions and potatoes, boxes of pepino and apples stacked to the ceiling, the ubiquitous space heater, an Atatürk clock, a small sink and even a television. Here, the brothers chat over tea with friends and family, share meals and cheer on their favorite Istanbul football team, Beşiktaş. Farther back is a separate room with a stove and oven, a large table for family gatherings and Ramazan feasts, a small cash register and the entrance to the walk-in cooler, where most of the produce is stored overnight. 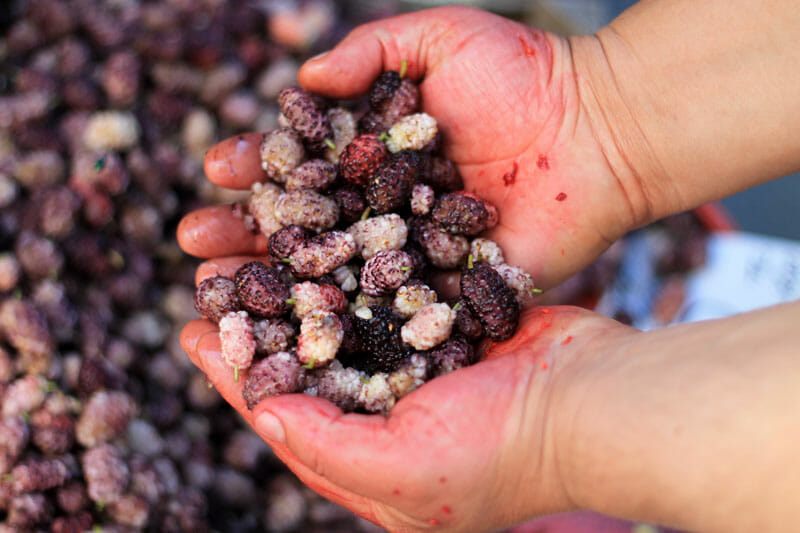 Unlike the average pazar, Uğur and his brothers’ boutique-style setup offers only the highest-quality handpicked produce, which allows them to stay ahead of the competition. What’s more, their lavish displays of fruits and vegetables evoke the neighborhood greengrocers that have been a facet of daily life in Istanbul for centuries.

In the late 17th century, Ottoman Turkish travel writer Evliya Çelebi chronicled the ins and outs of daily life in Constantinople and throughout the Ottoman Empire in his well-known travelogue Seyâhatnâme. Çelebi vividly describes the Procession of the Guilds, a rare and great spectacle of all the tradesmen of Constantinople, a parade of sorts for the sultan. There were guilds from all walks of life: carpenters, goldsmiths, tavern-keepers, beeswax sellers, fur-makers, butchers, porters, coffee merchants, shoemakers, fish-cooks, coppersmiths, gravediggers and, of course, the manavlar loncası, the Guild of the Fruit-Merchants.

In a translation provided by John Freely in his book Stamboul Sketches, Çelebi describes the guild in great detail: “Some dress in robes made of chestnuts, reciting verses of the Kuran while holding rosaries of dried raisins. They also build artificial ships, which are full of fruit, each ship being towed by a thousand men. The sails, mast, prow and stern of each of these ships are ornamented with fruit kernels. Merchants flock in crowds to enter these fruit-ships to fill their baskets.”

As our interview with Uğur is coming to an end, a regular customer walks by and asks how he’s doing. “Kaymak gibi oturuyorum!” Uğur responds with a grin. He then explains the Uğur-ism that we have come to know and love. It literally translates to “I’m sitting like clotted cream,” and for Uğur, that means he’s relaxed, utterly content. It made certain sense to us, since kaymak, as clotted cream is called in Turkish, happily rests atop milk or yogurt. But perhaps it’s also emblematic of his family’s journey, of their proverbial rise to the top.

(Translation help for this article was provided by Büşra Yılmaz)

Add to favorites
Uğur Manav
At the corner of Ergenekon Caddesi and Türkbeyi Sokak alongside Arı Eczanesi, just up the road from the Osmanbey metro station (Pangaltı exit), Şişli
Tel. +90 532 263 5113
Hours: 9am-10pm