Editor’s note: This post is the first installment of “Best Bites of 2012,” a roundup of our top culinary experiences over the last year. Stay tuned throughout this week for “Best Bites” from all of the cities Culinary Backstreets covers.

Hai Di Lao
We’re usually loathe to mention a restaurant that has locations all around China, but we were blown away by the dedication to customer service here – something that is sorely lacking in China. Too often, it’s a choice between authentic flavors or service. Not at Hai Di Lao. Friendly waiters changed our entire hotpot’s broth when we decided it had a bit too strong of a hǎixiān (seafood) flavor for our liking, and they even managed to snag us off-menu carrots from the employee meal. This might sound petty, but Chinese fúwùyuán (waitstaff) are normally not known for their willingness to compromise or indulge special requests.

Hai Di Lao’s fiery Sichuan hotpot broth is lovely in winter, and concocting our own dipping sauce from the huge range of ingredients made for a personalized experience. But it was the army of genuine, smiling waitstaff busying themselves slinging fresh noodles before our eyes, putting our cell phones in protective cases, wiping our fogged eyeglasses and pouring cups of delicious sour plum juice (酸梅汤, suānméi tāng) that added a special factor that made us feel warm and fuzzy inside. Or was that the Sichuan peppercorns?

Liu Shi’s Roast Pears
Liu Shi is so elusive that there is a certain Bigfoot-hunting element to his appeal. We first came across the smiling, mobile pear roaster near the Fangbang Lu night market street, and hoped to add him to our nighttime culinary walks. Unfortunately, his times and locations proved too random. When you do catch him, Liu Shi’s roasting machine is certainly a sight to behold. Four drawers with individual slots for one pear each are his core business. His machine slowly roasts the Asian pear in its own juices and even has an extra-small tap to easily funnel more pear juice into your waiting bowl. Mr. Liu has rock sugar on hand to make the healthy snack into a perfect dessert. For just a few RMB, we slurped down fresh pear soup with locals, equally impressed by the ingenuity and deliciousness of it all.

Picnic from Jiashan Market
Shanghai’s damp, bone-chilling winter lasted well into April this year, so we celebrated the first sunny Saturday of spring with a trip to Jiashan Market, our local farmers’ market, where customers hobnob with locals and expats selling their cottage-industry goods. After picking up pork rillettes from Humble Meats, grilled sausages and onion chutney from local jam queen Amelia, and a packet of Strictly Cookies’ irresistible banana-walnut cookies, we headed to the Okura Garden, a Japanese hotel overlooking one of the few parks in the city to allow you to sit on the grass. While digging into our DIY picnic, we watched a Chinese wedding take place under the gazebo. Unfortunately, Okura Garden fell in line with the keep-off-the-grass policy of the rest of the city’s parks by the end of summer, meaning that next year we’ll have to find a new place for impromptu snacking.

Ultraviolet
When Ultraviolet opened in spring of this year, expectations the world over were high, and we never in our wildest dreams imagined that it could live up to the barrage of hype that – as much as the construction delays – had plagued the venue over the past three years. The concept (still) sounds absurd: a “full sensory dining experience” that promises “psycho-taste,” by pairing each dish with not just a drink, but a sound, visual and, occasionally, a scent. Such a scheme could easily fall victim to the overindulgent fusion of culinary and hipster culture that has been mocked relentlessly in food blogs all year, but it doesn’t. Half the fun is the surprise that accompanies each new dish – from the floor-to-ceiling video screens, to the exuberant waitstaff, to your nine dining companions – so we wouldn’t want to give away too much. Let’s just say that one of the 22 courses in our meal nearly brought a grown woman to tears. (Address: Undisclosed location; you are picked up at Mr & Mrs Bund restaurant and taken there by van; Tel. +86 21 6142 5198, Advance booking required) 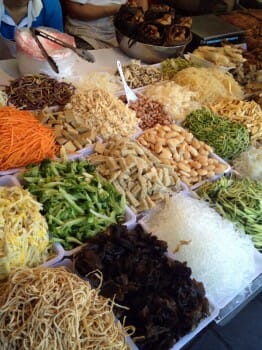 The first bite of liángpí (凉皮) – a DIY spicy cold salad – means only one thing: spring is just around the corner. So imagine our delight when we turned onto Wulumuqi Nan Lu while still suffering from a winter cold and saw our favorite liángpí vendor’s countertop festooned with white plastic trays stocked with glistening seaweed, julienned carrots, transparent glass noodles (粉丝, fěnsī) and more. Dinner plans of chicken noodle soup were scrapped as we piled blanched broccoli, gigantes beans, gummy wheat gluten (烤扶, kǎo fū) and silky bamboo tofu (腐竹, fǔzhú) onto our tray and handed it back to the vendor, asking for extra spice to get our sinuses seasonally ready. He whipped it around in a mixing bowl, dolloping in spoonfuls of salt, sugar and sesame seeds, then a generous dash of chile oil, before finishing it off with a fistful of cilantro. Just what the doctor ordered.