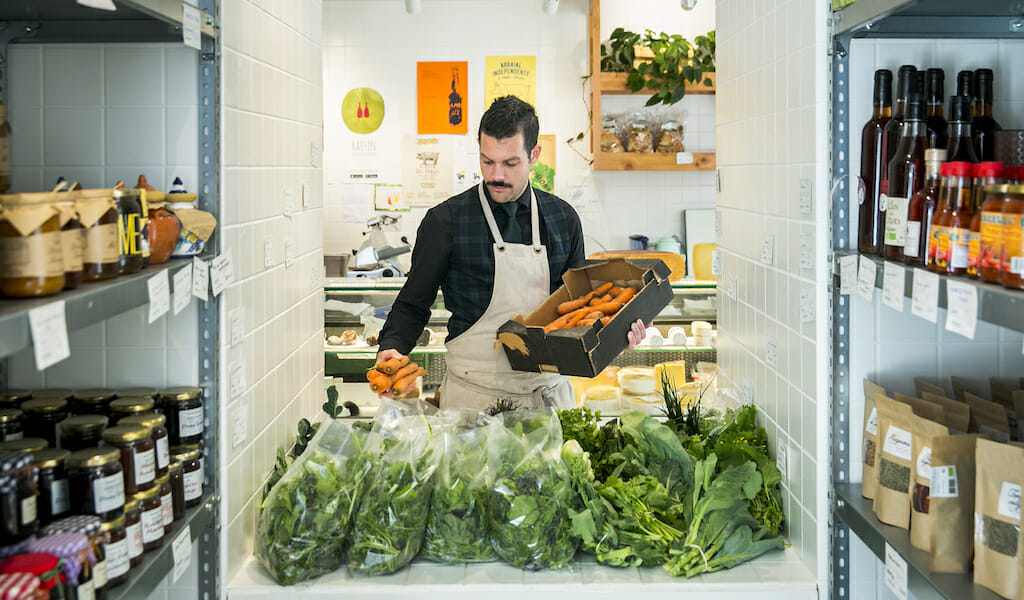 Lisbon’s indie culture scene has gone through various iterations over the years. In the 80s, influenced by the London indie scene, the city was animated by independent record shops, music clubs and bars, mostly in Bairro Alto. And in the 90s, the newspaper O Independente emerged and won over Lisboetas with its irreverent style.

Although the indie scene has stagnated somewhat recently, one woman is working to reinvigorate it by adding a new sector: food and wine. And despite the fact that Rita Santos only opened her shop, Comida Independente, in March of this year, it has already won a legion of fans.

Located in the quiet backstreets between the busy neighborhoods of Cais do Sodré and Santos, Comida Independente is one of the best grocery shops in Lisbon, attracting food lovers from all over the city. And even though it’s close to Mercado da Ribeira, which is home to a large number of small grocery stores, produce vendors and gourmet food stalls, there’s nothing quite like it.

Rita’s original idea was to sell the best of Portuguese gastronomy while exclusively featuring small producers. “In the end, we managed to have 80 percent of our stock made by Portuguese producers, while the rest is from small producers in other countries, especially wines, the section where we have more non-Portuguese offerings,” she explains. 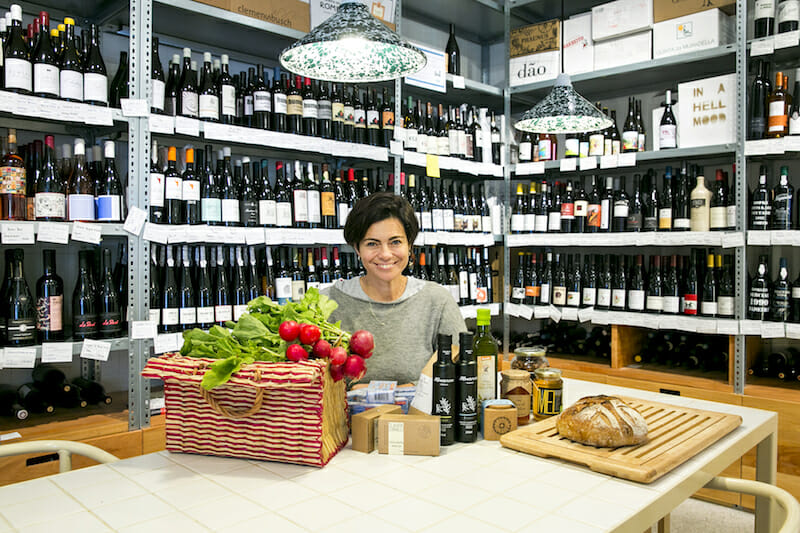 The wines, natural and organic wines in particular, are at the heart of the shop, with its regular wine tastings drawing in big crowds. Cheese, however, is a close second. And we can see why, having spotted on our most recent visit Maçussa chèvre (goat) cheese alongside different types of Terrincho Velho sheep’s milk cheese, which are semi-hard or hard and made with milk from the Churra da Terra Quente breed, and Azeitão, a soft sheep’s milk cheese made with a thistle rennet. The first is particularly difficult to find in Lisbon, and all three are high-quality cheeses from small producers.

“We wanted a wide range of goods – we didn’t want to limit our offerings,” Rita says. “So for instance on the chocolate side we have Claudio Corallo but also Feitoria do Cacau [the first works with cacao from the island of São Tomé e Príncipe, the second with cacao of various origins]. We wanted to have everything, from bean to bar, while respecting their origins.”

While exploring their coffee offerings, we were happy to see the very special coffee beans from Flor da Selva – the only wood-fired roaster remaining in Portugal – on the shelves, while the in-store espresso, which you can sip on as you shop, is made using beans from the Lisbon coffee specialist Sgt. Martinho.

Most of the shop’s products change depending on the season. “The shop is always full but we do have some ‘casualties,’ for instance when the goats are suckling their young we don’t have goat cheese for sale,” Rita explains. On our most recent visit, the store was stocked with pumpkins, radishes and various types of chard, while tomatoes and cucumbers were nowhere to be seen.

“Not everything artisanal was good, and many trips were made in vain.”

Though Comida Independente opened in March, Rita spent over a year laying the groundwork for the project. Most of her time was spent traveling across Portugal to find enough high-quality products to stock the shop. “Not everything artisanal was good, and many trips were made in vain,” she says. For example, she had to visit 15 different producers just to find two excellent versions of Serra da Estrela cheese, the gooey, soft sheep’s milk cheese made in this mountain range.

“But the list of producers started to grow organically, and we were getting so many recommendations from other people in the region or other producers,” she adds.

On her quest, Rita also received a lot of support from food writers and chefs alike. “They became ambassadors for our project and some, like João Rodrigues and Nuno Diniz, helped us find artisans, too,” she says.

There’s hardly anywhere else in the city that offers so many great choices in one place, from canned fish from Matosinhos to olive oil from the Algarve, honey to flor de sal, craft beers to salt cod and meat of all kinds – beef, pork, chouriços and ham.

People visit Comida Independente not only to shop, but also to eat. “We’ve noticed that people are fond of coming in to taste the food here. That makes us happy, we want people to come here and share food, discuss food, and celebrate food,” Rita says. In addition to hosting food events and wine tastings, the shop is particularly popular on Thursday evenings, when the bar sells wine by the glass, usually with a delicious petisco, a small bar snack, on the side. 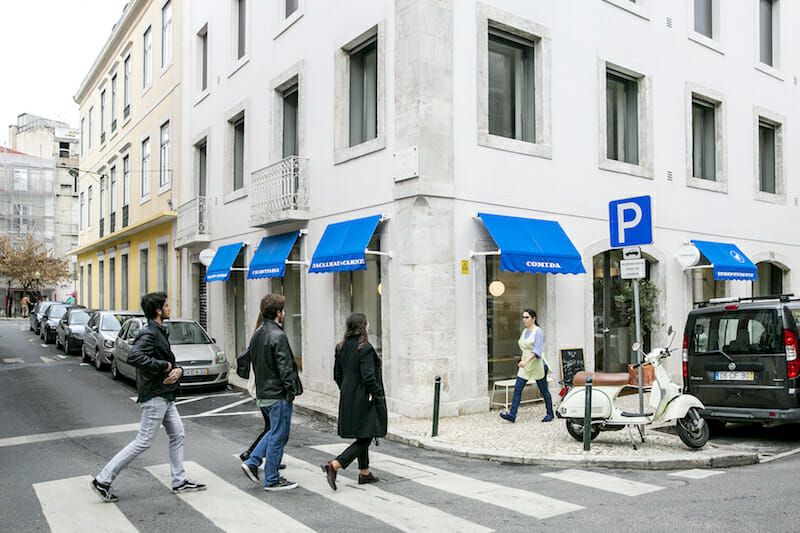 “Wine plays an important role because it’s the best expression of our project,” Rita says. “It’s a product of nature – each bottle has its own terroir – that the producer adds to.”

Yet natural wines are a new territory for Rita – she didn’t even know what natural wine was a year ago. During her travels she met some natural winemakers and then she found Os Goliardos, originally a wine bar but now a retailer with a large portfolio of natural and biodynamic wines.

Given the importance of wine, Rita can usually be found working alongside Olavo, the former sommelier at the Lisbon restaurant Leopold, or Inês, another sommelier.

The shop itself is beautifully lit and has a relaxed layout – it’s no wonder that people like to linger. But Rita’s original idea was to find space in a market, such as Mercado da Ribeira, a place where people have come to buy food products for centuries. Try as she might, she wasn’t able to find a suitable spot, which led her to open at this location. She wants Comida Independente to be “a shop for everyone really, not for tourists.”

Her success to date reflects a demand for good wine and food, whether it’s fresh or in a tin, in an unpretentious atmosphere. The kindness, friendliness and professionalism of Rita, Inês and Olavo are certainly a breath of fresh air amongst the many soulless “gourmet” shops that abound in Lisbon.

Surprisingly, Rita, who owns the shop with two business partners, is relatively new to the food world. Before opening Comida Independente, she worked as a project manager in large multinational companies. “I traveled a lot and was lucky to visit many countries and restaurants,” she says. “But I was feeling thirsty for authenticity. It’s good to go back to the basics, to the simple things in life.”

We couldn’t agree more – this is the kind of new indie wave we can get behind. 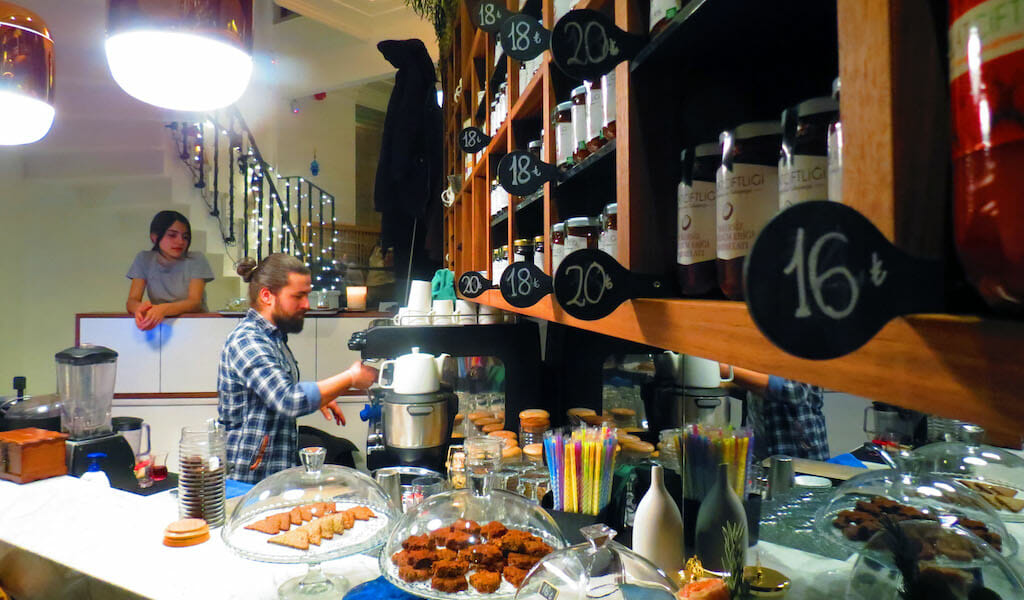 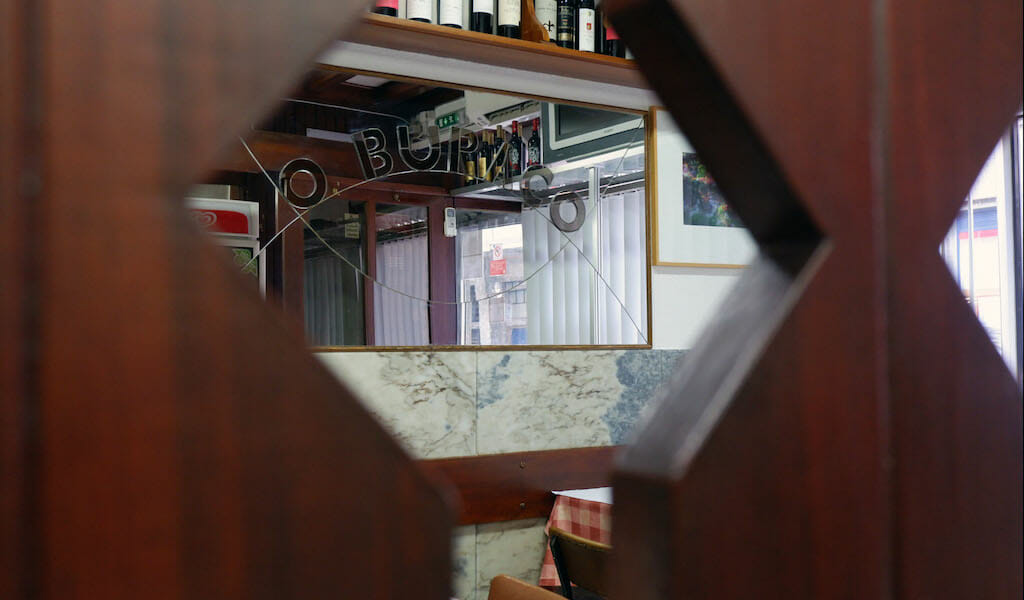