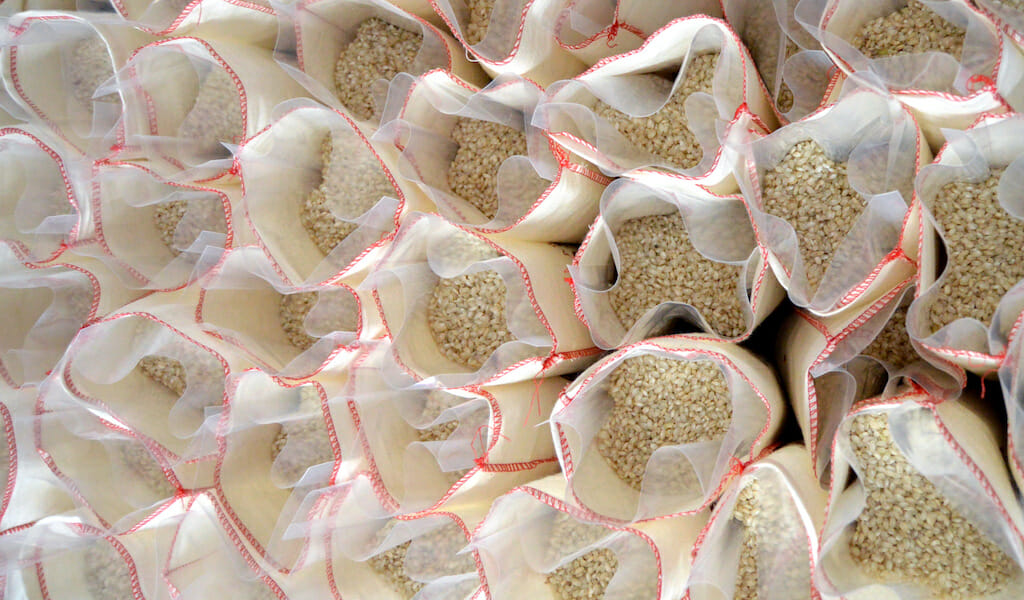 The Delta de l’Ebre is a magical part of southern Catalonia’s Tarragona region. A flat swampy area where the Ebro River meets the sea, the delta contains within its confines a natural park rich in fauna and flora as well as 20,500 hectares of rice fields; the ecosystem allows both to coexist in harmony. The area is perhaps at its most magical when the water rises up to cover the plots, creating what the rice producer Teresa Margalef calls a “land of mirrors.”

Until the arrival of the Arabs to the Iberian Peninsula in 711, rice in Spain (and Europe) was a non-cultivated grass with Asian origins; wheat was the crop of choice. The Moors, experts in its cultivation, started to implement their planting and harvesting techniques in the swampy areas in the south and east of the peninsula.

But despite this initial expansion, rice’s cultivation was abandoned for centuries after the expulsion of the Jews and the Moors in the 15th century, and at certain points forbidden due to the fact that the stagnant waters of rice fields were breeding grounds for mosquitos, which were known for spreading malaria. It wasn’t until the mid-19th century, when canalization became more widespread in an attempt to exert more control over waterways and reduce the mosquito population, that rice began to make a real comeback in different parts of Spain, including in the Delta de l’Ebre. 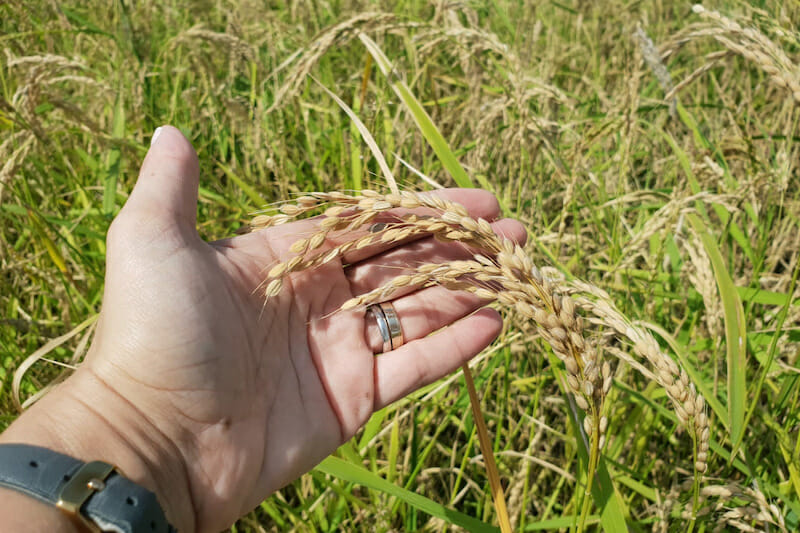 Currently, rice is the main economic activity of the Delta – it produces around 154,000 tons per year, which accounts for 19 percent of Spain’s rice production. The country is the second largest producer of rice in Europe, after Italy (although it lags far behind the major producers in Asia). In Delta de l’Ebre, around 70 percent of the production is in the hands of large cooperatives, like Nomen, Bayo, and Segadors del Delta, while the rest is spread out over a few independent producers, like EcoCastells, Mas Tramontano, and Molí de Rafelet.

To learn more about the rice grown in the Delta, we talked with Teresa Margalef, the third generation to run Molí de Rafelet, a family company that has been growing rice in the Ebro Delta since 1910. She and her brother Rafael Margalef decided to rescue an old rice mill of the family’s that had fallen into a state of disrepair; the wooden and stone beauty now produces some of the most prized rice in the region.

Teresa explains that the growing and harvesting cycle starts in April, when the rice fields are filled with water released from the canals. The rice seeds, having already been soaked for two days, are then planted in the fields, which at this point are covered by around 5 centimeters of river water (back in the day this was done by hand, but now it’s done by machines). The water circulates from the river to the channels around each plot in a constant but almost imperceptible stream – it never stops flowing.

“It is the kind of rice that when we are milling it, my brother and I can immediately recognize it just by the smell.”

In June and July, the rice fields start to become green; in August and September, the rice matures. Although the exact harvest time depends on that year’s conditions and the variety of rice, it is usually held sometime in October. After being collected, the rice is typically dried in an industrial drier, but at Molí de Rafelet they dry the rice directly in the fields, like their grandparents did.

After it’s sufficiently dry, the husk is removed, and it’s time for the grain to be polished (assuming the aim is produce white as opposed to brown rice). Most producers use an industrial water polisher, yet at Molí de Rafelet’s old mill, the grains are fed between two cones made of emery stone – a process not unlike filing your nails. While it results in a more irregular color, this type of polishing keeps the original flavor more intact.

Molí de Rafelet specializes in growing unique local varieties like bomba, marisma, carnaroli and their very special Gran Reserva. This particular variety, an older type of rice that was saved from extinction by a relative who collected its seeds, doesn’t have an official name, but continues to be planted and replanted generation after generation. “It is the kind of rice that when we are milling it, my brother and I can immediately recognize it just by the smell,” Teresa says. Produced in small quantities and always the first variety to sell out, Teresa describes it as “a wonderful kind of rice that is never overcooked and ends big and full of flavor.” 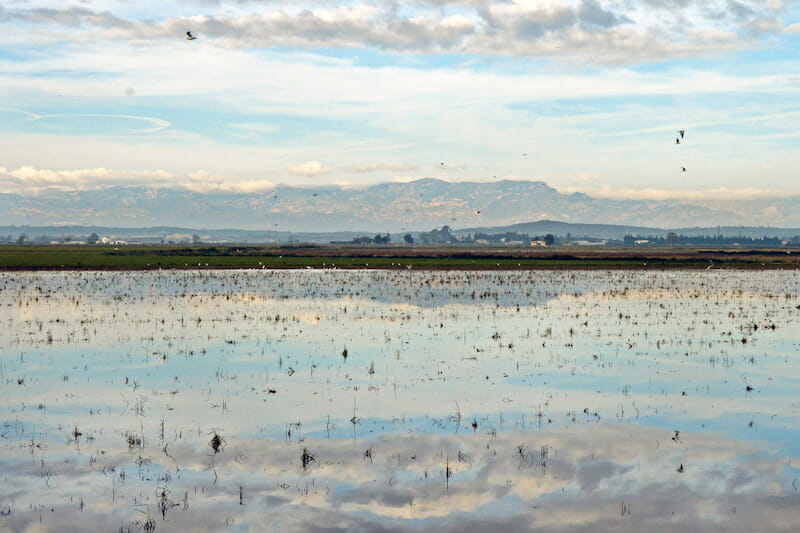 Like grapes, rice also has a terroir, and the same variety changes a lot depending of where it is cultivated – the soil, minerals, weather and more can affect the flavor, texture and also the cooking time. That’s why it’s important to know where your rice is coming from. Many customers (us included) looking for the best-quality rice buy from Molí de Rafelet, and their fantastic rice is also used in numerous restaurants, from famous Michelin-starred spots to smaller, family-run joints.

Now, after the harvest, when the rice is being milled and packaged, the water levels rise as tractors press the soil down to prepare the land for the next crop. The channels are closed, and the Ebro Delta goes into its dry period, waiting for the start of the cycle in spring, when once again it will be transformed into a land of mirrors.

Rice obviously plays a central role in the Spanish and Catalan cuisines, so there’s no shortage of places to purchase it in Barcelona. If you’re specifically looking for rice from the Delta de l’Ebre, we recommend visiting the beautiful Casa Gispert in El Born. In business since 1851, this store stocks Molí de Rafelet rice. Also in El Born, the wonderful Casa Perris, formerly known as Casa Torras, is a specialty shop that sells some 20 types of rice. Finally, Queviures Murria in L’Eixample is a stunning historic grocery store and deli that sells rice from the Ebro Delta.

Barcelona | By Paula Mourenza
By Paula Mourenza
BarcelonaSpain, Italy, Greece, Turkey, Portugal, Morocco, Tunisia – one thing that unites this swathe of the Mediterranean is olive oil, whose use in the Fertile Crescent can be traced back to 6000 B.C.E. Olives arrived in the southern part of the Iberian Peninsula around 9th century B.C.E. with the Phoenicians. Ancient Rome saw huge quantities…
Where to Buy Rice in Barcelona