Spain, Italy, Greece, Turkey, Portugal, Morocco, Tunisia – one thing that unites this swathe of the Mediterranean is olive oil, whose use in the Fertile Crescent can be traced back to 6000 B.C.E.

Olives arrived in the southern part of the Iberian Peninsula around 9th century B.C.E. with the Phoenicians. Ancient Rome saw huge quantities of olive oil from Hispania Baetica (currently Andalucía) being transported throughout the Roman Empire in millions of amphorae (made in Baetica).

Spain leads production of olive oil to this day, with 45 percent of the global total. The majority (65 percent) of Spanish olive oil production is sold to Italy, where this oil is mixed with others (normally of the same quality, but not always) and sold under an Italian label. Italian companies have also been acquiring Spanish producers and olive groves. 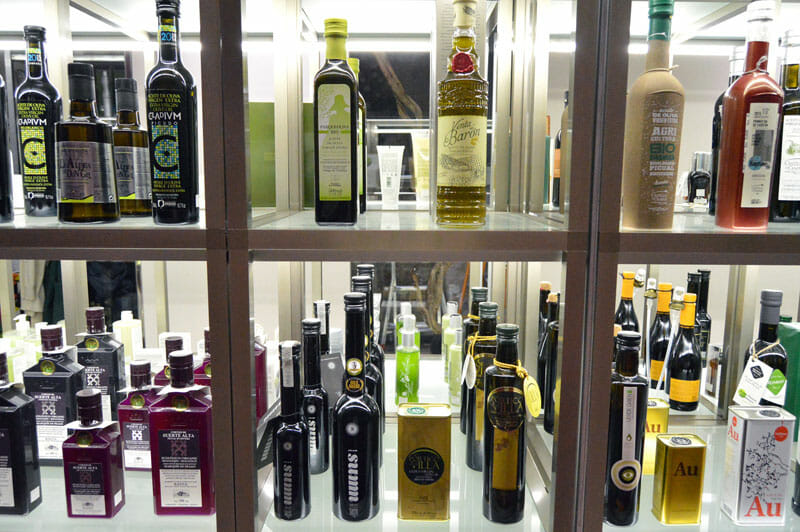 In recent decades, the Spanish olive oil industry – like many others in food – has impressively increased the quality and diversity of production, selling more high-quality extra-virgin olive oil in premium packaging instead of focusing only on quantity, sold in bulk, as it has in the past. This is not just a response to the market but also part of the wonderful culinary flowering Spain is experiencing. It’s a new golden (or, perhaps, greenish) age for Spanish olive oil.

In Spain, there are 260 different olive varieties spread throughout 32 Protected Designations of Origin, mostly in Andalucía. Only about 20 olive varieties are used for the best olive oil production. While blends can make great oils, Spain produces 60 single-variety olive oils, among them arbequina, royal, picual, hojiblanca, cornicabra, empeltre, lechín, picudo, verdial, manzanilla and morruda. From all those olives, each with its own fascinating organoleptic characteristics, a range of oils can be produced: Extra-virgin (perfect flavor and aroma), virgin (great but not perfect), olive oil (mix of refined and virgin) and lamp oil (refined and not edible).

Extra-virgin oil is cold-pressed only by mechanical means at temperatures under 27 degrees C from fresh, healthy olives with no defects and a maximum acidity of 0.8º. This oil must then be kept in a well-sealed, opaque bottle and protected from exposure to sunlight and heat to prevent oxidation.

As with wine, the characteristics of an oil depend on raw materials, terroir and harvesting and production methods. The combination of maturity and the amount of juice accumulated in the fruit also determines the ideal time to harvest to make the desired quantity and style of oil.

The trend in Spain right now is to produce greener and fresher single-variety extra-virgin olive oil and more organic ones. Olives harvested early – October, in Spain – when they are still a bit green, make oils with live polyphenols, intense, fresh herbal and fruity aromas, some bitterness and a peppery bite. These oils are best enjoyed raw, with bread or vegetables or as a finishing touch to point up the flavors of cooked dishes. 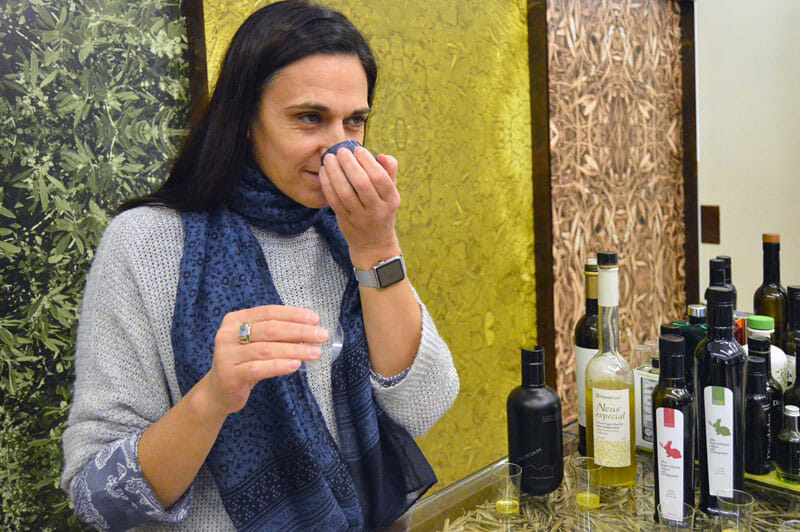 More mature olives produce oil with more golden tones, a nuttier and sweeter flavor and less bitterness and spiciness. This oil is less delicate, more stable and thus better for cooking. (Caveat emptor: the color of the oil varies according to olive type, maturation and production methods, so it’s not a reliable indicator of quality in itself.)

Alongside the rise of excellent extra-virgin is the increasing number of shops across Spain specializing in them, like the chain La Chinata. In Barcelona, in addition to the numerous gourmet shops and historic colmados – all of which have a selection of good local and Spanish extra-virgin oils – there are specialty olive oil shops that have an important role as distributors, educators and curators of market trends, connecting consumers and producers.

Ana Segovia opened Oro Líquido in the Barrio Gòtico in 2005, when she decided to change careers and reconnect with her grandparents’ land through olive oil. Segovia was born in France after her grandfather and parents left their native Andalucía to flee the civil war and Franco’s dictatorship. Located in the former antique shop that Segovia’s father opened after returning to Spain, Oro Líquido sells some of the country’s most prized and interesting extra-virgin olive oils, along with a top-notch selection of those made by Catalan producers and a range of olive oil-based cosmetics. Segovia took the time to explain to us the keys to recognizing good olive oil and also organizes useful tastings for international chefs and interested customers.

Inspired in the wine shops, Sandra Stefani opened OliSal in Gràcia nine years ago, with the idea of elevating Spanish extra-virgin olive oil to the gourmet level it deserves. The oils range from the most precious bottles to economy-sized garrafas and cans, and she carries a variety of salts and vinegars as well. We discussed with her how oil production and distribution in Spain have been changing. She also told us that the shop’s best customers, besides chefs and food lovers, are many of the elderly women in the neighborhood, who, with their knowledgeable palates – and modest incomes – spend more on good olive oil than others who are more affluent. 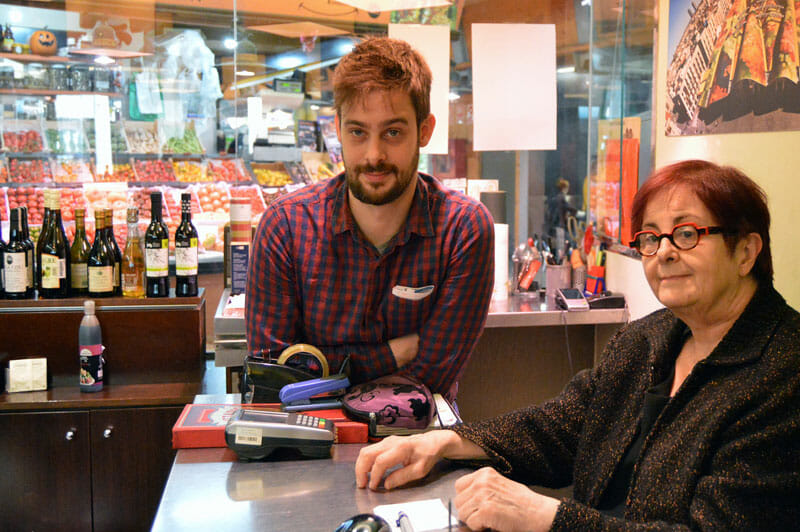 Inside Santa Caterina market, there’s Olis Oliva, a busy little shop that has also been around since 2005 and is managed by Ana María García Webermann and her son, Daniel Mercadé García. Weberman’s half-Spanish, half-French family comes from Alsace, and her inspiration for the shop comes from French gourmet olive oil shops. Olis Oliva sells wonderful, high-quality Spanish extra-virgin olive oil in premium packaging, small bottles that are easy to transport and also big plastic garrafas and tins. The shop also carries excellent Spanish vinegars, a few carefully selected Italian and French products and some wine – it’s the perfect place to buy an edible or quaffable present (whether for others or yourself).

This article was originally published on January 3, 2017. 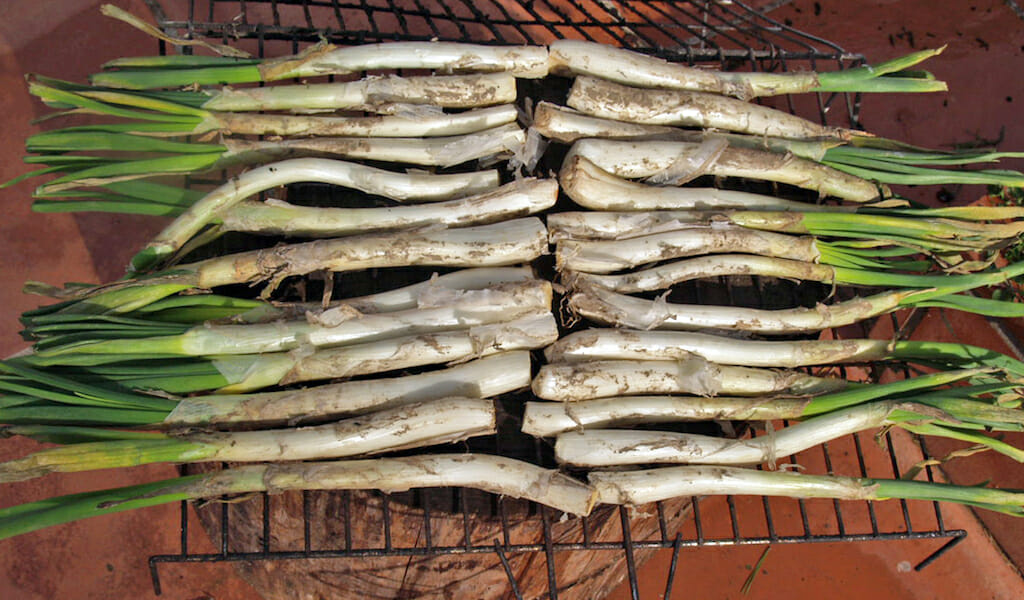