There is a day in February when we raise our noses to the sky like dogs and catch the first teasing wisps of spring. Our eyes widen, we nod and chime with giddy grins, “It’s coming.” Then the weather turns with a cold snap or even snow and we forget all about spring until one day in mid-March we wake up, pour a coffee, peer out the window and cry out, “Whoa, look!” jabbing our forefingers towards our tkemali tree and its little white flowers that bloomed overnight; the first blossoms of the year.

No fruit says springtime greater than tkemali, which is a cherry plum (prunus cerasifera) harvested young, when it is exquisitely sour. Together with fresh tarragon, it is the basis of the mandatory Easter dish, chakapuli. People are stocked with preserved sour plums just in case Easter falls too early on the calendar.

Although some people eat them on their own and dipped in salt, Persian style, tkemali are famously devoured in a bodacious dipping sauce, also called tkemali. Imagine what a juicy overgrown plum orchard would taste like in one big explosion – snappy tart with the fresh rawness of wild mint, cilantro flowers, young dill and garlic. 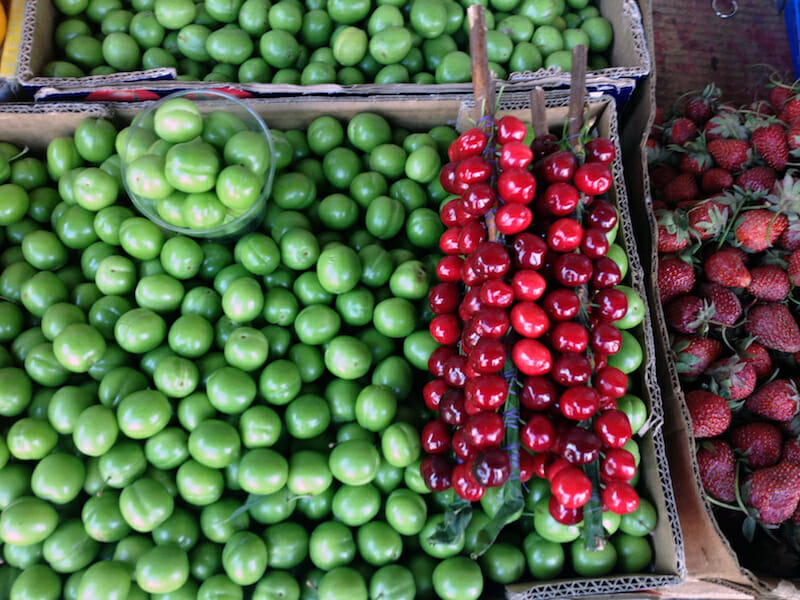 No home is tkemali-less, for it goes on just about everything: eggs, fried potatoes, chicken, roasted pork, lamb, beef and fish, you name it. You will never reach for a bottle of ketchup again. It may be so good you will find yourself drinking it by the glass.

“Tkemali is probably the most native Georgian dish we have. No one else makes it but Georgians,” affirms Irma Laghadze, a local culinary specialist and guide.

We are sitting with Irma and two cooking instructors, Teona Shamanauri and Tatia Tsitelashvili, around a table at their Tbilisi home. Outside in the garden, an apricot tree is in full bloom under a slowly budding cherry tree. Her tkemali tree has lost most its flowers, the young fruits not yet ready to pop.

Practically every family has their own designated tkemali maker, whether it’s mom, grandma or an aunt.

The girls are fasting for Lent and dreaming about how they will break it on Easter with chakapuli, “made from lamb, of course!”

“In Imereti, they roast chicken and serve it in a bath of tkemali,” Teona says, licking her lips.

Practically every family has their own designated tkemali maker, whether it’s mom, grandma or an aunt, and although ingredients vary little, no two versions taste alike. Some people might add spicy green or red pepper, fresh savory, or herbs like blue fenugreek, coriander and thyme. Others religiously stick to only fresh ingredients.

“Cilantro is best when it is flowering and has young seeds,” Teona insists. Irma agrees.

Tkemali is also made with alucha (prunus vachuschtii), a plum that is a tad less tart. Sometimes, it is not even made with plums at all. In west Georgia people make a similar sauce with pomegranates and Odessa grapes. Irma talks about how her grandmother made “isrim-makvali” using blackberries and unripe grapes with garlic and cilantro. She also says there is a sour cherry tkemali too. 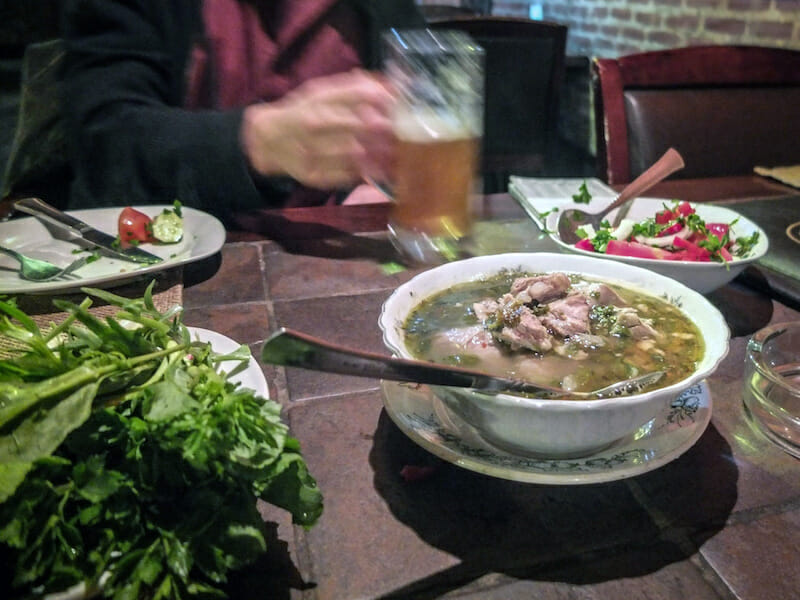 As spring blends to summer and the little plum ripens, the sauce becomes increasingly sweeter and redder. You can find both green and red at supermarkets, but the best tkemali comes from your personal source, whether it is a relative or the corner market.

We are particularly fond of Tina Nugzarashvili at stall 10 in the “new” Dezerter’s Bazaar building. Her sauces pack a spunky red pepper kick. Sometimes she will cook up a pot right there, on a little electric burner. Her red tkemali is perfect with roasted pork and ribs.

Our favorite tkemali, however, has yet to be discovered. Sometimes you dip a piece of bread into one that bowls you over in salacious moans only to drool over another somewhere else. For Irma, a fourth-generation native of Kutaisi, it was her mother that set the standard she measures everything by.

“My mom was the best cook. Whenever I taste someone’s tkemali, I am looking for my mother’s,” she says.

Editor’s note: Here at Culinary Backstreets, we eagerly await the coming of spring each year, not just for the nicer weather but also because some of our favorite foods and dishes are at their best – or indeed, are only available – for a short period during this season. So we are running a weeklong celebration – “Spring (Food) Break 2021” – of our favorite springtime eats. This article on tkemali was originally published on April 18, 2019.