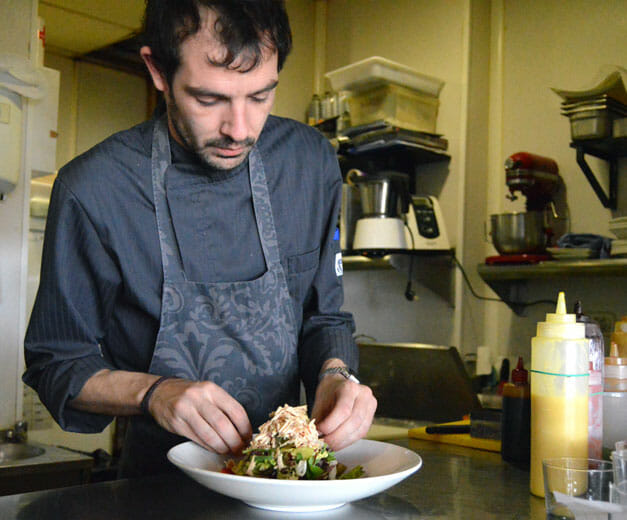 “We have paper tablecloths and napkins on the tables for two reasons: to not forget our roots as a workers’ canteen and because we prefer to spend the money on good product for our customers.” That was how Rafa Alberdi explained to us one of the keys to his restaurant, El Kaiku. Located in Barceloneta in front of what was once shipyards, the working man’s bar was transformed into an excellent neighborhood restaurant, where diners can enjoy cooking with traditional roots and modern leanings made from locally harvested seafood and other ingredients. The lovely terrace, one of our favorites in this city, is a boon as the weather warms up.

Alberdi’s parents, Basque in origin, opened the bar in 1973. During the 1970s and ’80s, El Kaiku (“bowl” in Basque) was among the establishments that catered to the 10,000 workers of the port, shipyards, factories and fishing boats of the area. It offered comfort food, with breakfast and a daily lunch menu, a combination of traditional seafood preparations and hearty stews and meat and bean dishes, all served on paper tablecloths and napkins at the long communal tables or the bar.

But with the arrival of the Olympic Games in 1992, all commercial activity was moved out of the old city to new port installations at Barcelona’s periphery. The area and the clients consequently changed, with a dramatic reduction in port workers and an increase in office and service workers, as well as local residents, deckhands and other sailboat staff and tourists. When his parents retired in 1993, Alberdi took over and decided to alter the focus of El Kaiku to account for the area’s changing demographics.

The consumption of fish and seafood is markedly higher now than it was some decades ago. The restaurant also experiments more, offering surprising combinations. As Alberdi says, he and his staff love to enjoy their work, and thus they cook what they want, which is why there’s always something different, creative, perhaps with a bit of international influence. Everything is always tasted and must be approved by the kitchen team, led by chef Carlos Reseco, and Alberdi, who was formerly a chef. 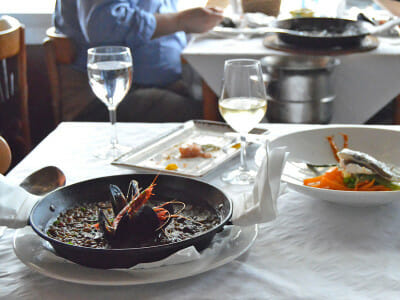 El Kaiku’s emphasis is on the seasonal, local and excellent qualities of the ingredients themselves. Some of the produce comes from Alberdi’s own vegetable garden in Masnou, just northeast of Barcelona. He also buys most of his seafood at the small neighborhood fish market (lonja, in Spanish, llotja in Catalan) of La Barceloneta, just as his family always did, in order to obtain a wide variety of fish – as well as better prices – and avoid the more overfished species. El Kaiku also sources exceptional products from other areas, such as scallops and cockles from Galicia.

The cooking style here is mostly based on coastal and fishermen’s traditions, which include seafood soups like suquets, rice dishes like arros melós and arros caldos, and ranxo d’abord (“ranch on board”), the lunch that fishermen used to make for themselves aboard ship, usually with some rice. The affordable prices, high nutritional value and proximity of the rice cultivation centers in the north of Valencia and south of Catalonia made the consumption of rice widespread along the entire coast – especially in combination with fish and seafood. El Kaiku also serves rossejat de fideus (fish or seafood stew with noodles, often with allioli, or garlic mayonnaise) and the more Valencian arroz a banda, two typical seafood preparations that use fish broth as the base.

There’s no shortage of rice dishes here, but among the most highly celebrated is the smoked Bomba rice with seafood. The rice comes from Catalan Carlos Piernas del Amor (Carpier), who cold smokes foods using pinecones. With this dish, Alberdi has modernized that old tradition of cooking rice in a big pan (paella) over a wood fire, which imbues the ingredients with a smoky flavor. The smoked rice is cooked to the perfect level of doneness – tender, al dente – and served with prawns, mussels, octopus, artichokes, mushrooms and leeks. Each bite bursts with incredible flavor. 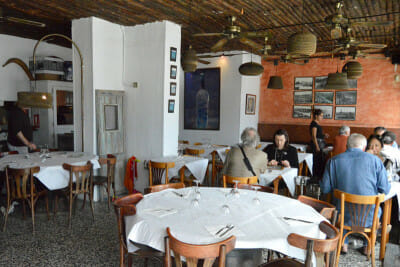 Among the other dishes, we also love the exquisite prawn tartare. The chopped raw prawns are dressed with an infusion made from prawn heads and coconut milk, minced leek and a light ginger foam and accompanied by seaweed bread. It’s creamy and fresh, delicate and delicious. Yet one more special preparation is the anemone tempura with lime, a soft creamy bite that tastes profoundly of the sea, which can be pointed up with a sweet, fruity Montsant wine reduction.

La Barceloneta is changing very quickly, but El Kaiku is still a place that puts its heart and soul into feeding local workers – albeit the 21st-century kind. 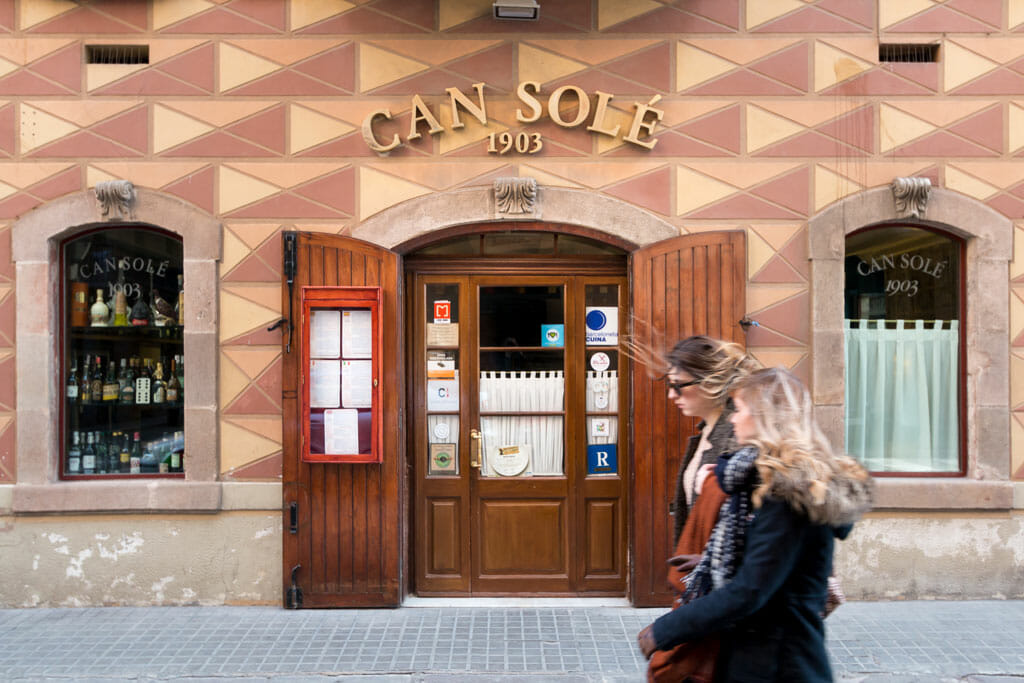 Check out the best of La Barceloneta with us!

Can Solé: From Fishermen to Famosos

Barcelona | By Sam Zucker
By Sam Zucker
BarcelonaSince the late 18th century, this quiet street corner in the salty seaside neighborhood of La Barceloneta has borne the name Can Solé. The long history of this tradition-steeped restaurant began with Gregorio Solé, owner of a shop of the same name, which sold soaps, oils and other sundries. In 1903, the space was sold… 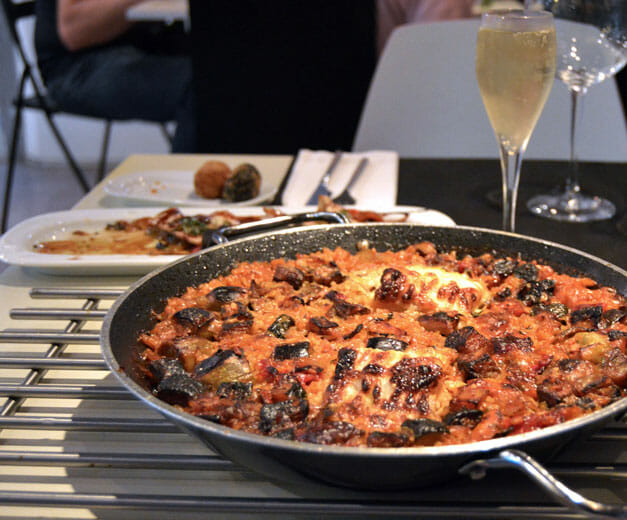 Barcelona | By Paula Mourenza
By Paula Mourenza
BarcelonaAs a side benefit of his former life as a financial advisor, Xavier Maymo got to spend 20 years dining at some of Europe’s finest restaurants. When he would return home after his business trips, he would relax by recreating the dishes he had enjoyed at these restaurants in his own kitchen. His mother had…
El Kaiku
Plaza del Mar 1, La Barceloneta
Tel. +34 93 221 9082 (reservations are a must)
www.restaurantkaiku.cat
Hours: Tues.-Sat. 1-3:30pm (from May 15-Sept. 15 also 7:30-10:30pm); Sun. 1-3:30pm<