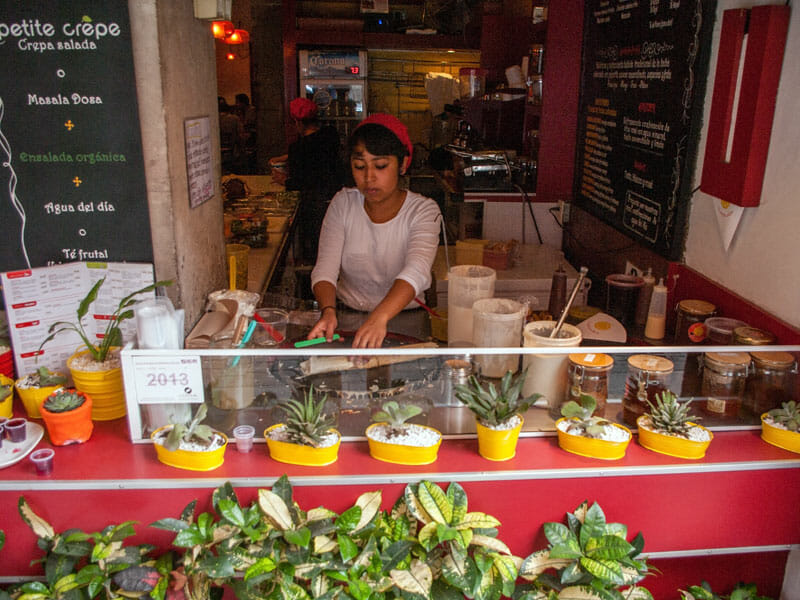 As diverse Mexican food is, there are times when we just have a craving for something different, which is why we were delighted recently to discover La Petite Crepe in the Centro Histórico, a tiny eatery producing delicious crepes and tasty beverages with an international pedigree.

Owner Sandra Calso grew up in Mexico City but dreamed of seeing other parts of the world. As a young visual artist, she got her wish, and ended up spending three years split living between France and India. After these formative years, she decided to return to her native city and open up an eatery based on the cuisines she learned to love during her travels. When La Petite Crepe opened eight years ago, it was a one-of-a-kind establishment in the neighborhood and, for the most part, it still is.

Tucked inside what looks like the former hallway of a historic building, La Petite Crepe is much longer than it is wide, with a tight prep kitchen in which a team of all-female employees in bright red bonnets somehow manages to maneuver. Two counters and a handful of colorful tables make up the dining area, which is mirrored on one side to give the illusion of greater space. Adorning the walls are hand-painted floral designs in greens and yellows that give the place a unique, homey feel. “I found this elderly man who painted them. It took over a month for him to do them, but they’re really beautiful!” Sandra explained. “No one does that kind of work anymore, so I wanted to hire him just for that because I really think it’s a dying art.”

We started out with savory crepes, ordering the “Campestre,” a plate-sized crepe filled with chunks of chicken, cooked almonds, gouda cheese and chives and folded into a triangle. Topped with a light drizzling of chipotle sauce, the crepe was delicious, with a smooth, mild flavor, and managed to create a culinary bridge between Europe and Mexico. We also tried the “Curry Caminos,” a long, tubular crepe – similar to an Indian masala dosa – that was filled with chicken chunks in yellow curry and gouda cheese. Though it was spicier than the Campestre, the combination of the curry and the light, sweet flavor of the crepe worked well, and we devoured it within minutes.

But of course what we were really waiting for were the sweet crepes. Sandra told us that the jellies in the sweet crepes, in flavors such as orange, apple, blackberry and strawberry, were all made in-house. She suggested we try one of her favorites, the “Rayito de Sol,” made with orange jelly, butter and dark chocolate both inside and drizzled on top. We could see why she had recommended it: the citrus and the dark cocoa flavors tasted amazing together. Hungry for more, we also tried the “Tentación,” filled with mascarpone, cream cheese, honey, walnuts and sliced kiwi. The kiwi and cheese gave it a fresh, light flavor that was very different from the Rayito, but no less worthy of our taste buds. 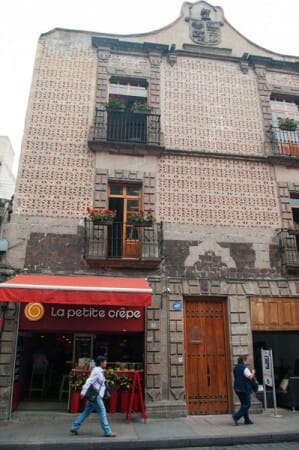 The menu at La Petite Crepe is surprisingly extensive considering the small size of the kitchen, and also includes panini and wraps in addition to the dozens of varieties of crepes. To wash all of the crepe goodness down, we ordered a “Mambo Mix” smoothie, a delectable concoction made with fresh bananas, strawberries, blueberries, mangoes and raspberries, as well as an Indian treat, a red fruit lassi, made with raspberries, strawberries, brown sugar, yogurt, cinnamon and other spices. There is also a selection of flavored teas and organic coffees, ensuring that no customer will ever go thirsty at La Petite Crepe.

As we ate, we heard from Sandra about the philosophy behind her restaurant, which was inspired by seeing many disadvantaged women during her travels and wanting to make a difference in her own country, where underprivileged women often face difficulties in finding employment. For her all-female workforce, Sandra only hires women who are struggling economically, such as single mothers and students trying to make ends meet, and her concern for her employees extends even to scheduling their work hours around long commutes or family responsibilities. From the constant smiles and hard work we witnessed from her team, it was clear that Sandra’s efforts were not lost on her employees, and that there was much respect and genuine appreciation all around. Her choice of location was also deliberate. “The Centro Histórico is different from most other neighborhoods,” she explained. “In some areas there are social and economic barriers, but in the Centro Histórico there are people from all walks of life who come from all over the city. I love the mix of people here.”

We came to La Petite Crepe for something different and that’s exactly what we found, not only in the mouthwatering selection of dishes and use of high-quality ingredients, but in an owner who chooses to do business with people in mind. It’s not often that doing good tastes so good. 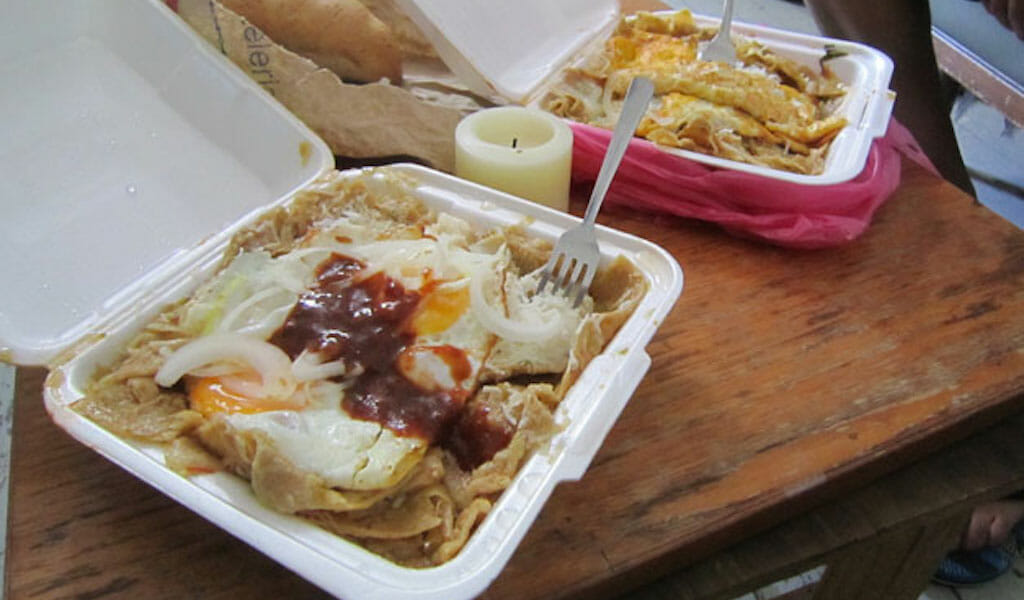 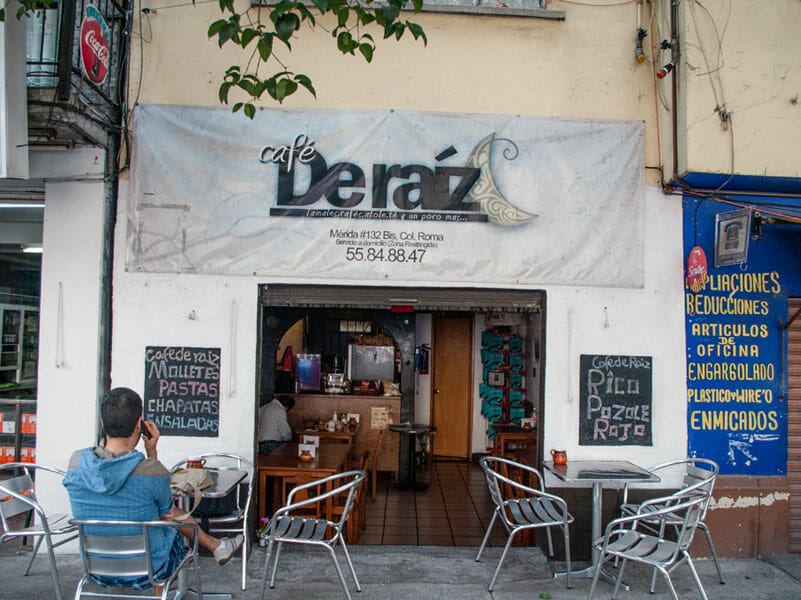 Mexico City | By Ben Herrera
By Ben Herrera
Mexico CityThe cuisine of Mexico City has long been influenced not only by waves of international immigrants but also by regional cooking from around the country. In the mid-20th century particularly, droves of workers and their families, lured by economic opportunities, arrived in the Distrito Federal from every corner of Mexico, bringing their local customs and… 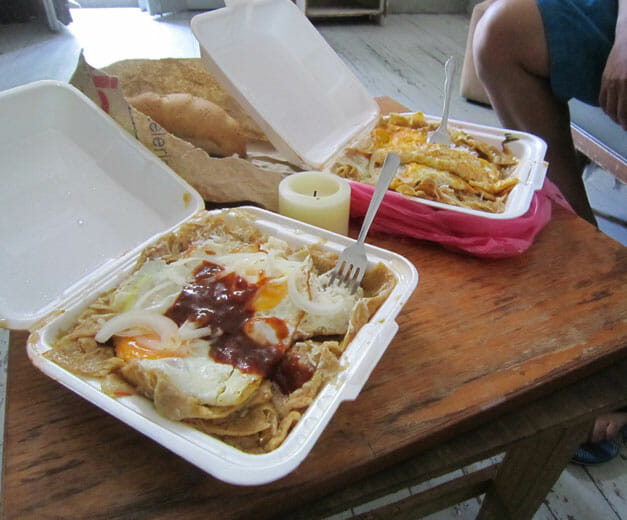