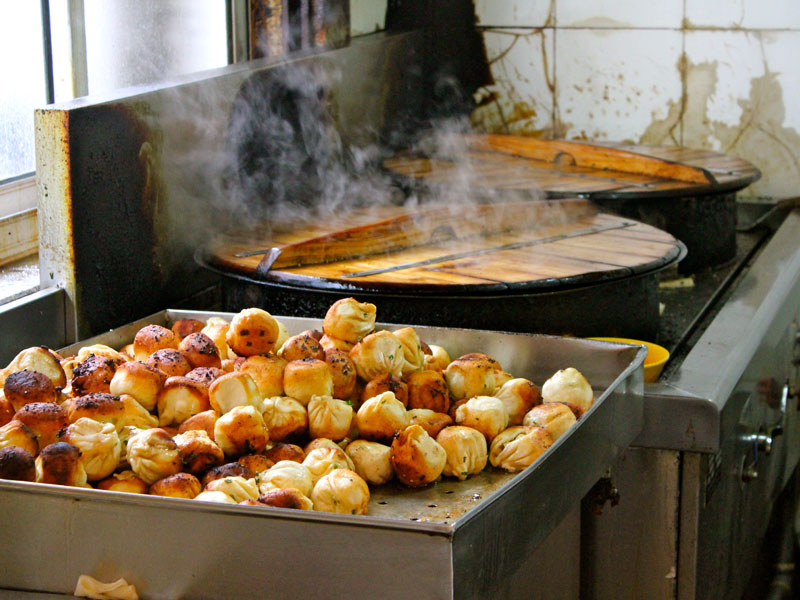 To qualify as a Chinese Time-Honored Brand (老字号, lǎozìhào), shops must prove that they’ve been a profitable business since 1956. Only about 1,000 brands across the country have achieved this honor, an impressive number considering the tumult of the last 60 years in China and the damage to hundreds of historical national treasures. Among these government-endorsed venues is Da Hu Chun (大壶春), one of Shanghai’s oldest fried pork bun shops, which first opened in the 1930s, less than a decade after its specialty dish, shēngjiān mántou (生煎馒头), was created.

While it’s not clear who first conceived of shengjian mantou, the dumplings are believed to have emerged in tea shops as part of dim sum, and specialty shops began selling them in the 1930s. Nearly 80 years later, Da Hu Chun has six restaurants across Shanghai, including the original location on Sichuan Lu. The narrow space, which has just four tables with wooden benches, shares its street address with a hybrid sit-down Shanghai-Sichuanese restaurant, but it’s not the mapo tofu or hongshao rou that brings in diners. The most popular dish is the Da Hu Chun buns, which are conveniently delivered piping hot from behind the partition that separates the hole-in-the-wall joint from the fancy restaurant.

But what makes these buns so darn desirable? Shengjian mantou – or shēngjiān bāo, as they’re known everywhere else in China except Shanghai – are pockets of juicy pork wrapped in bread dough, then arranged in a flat wok to deep-fry the bottoms to a crisp crunch. Hot water is also tossed into the pan to steam the top and sides of the buns. These delicious savory bites are sold throughout the city, but what sets Da Hu Chun’s particular variety apart is the way they are made.

There are two schools of thought when it comes to shengjian mantou: clear water (清水, qīngshuǐ) and troubled water (混水, hún shuǐ). You can easily tell the difference between the two just by looking at them. The “troubled water” variety is cooked by deep-frying the pinched dough in the oil, a method commonly used by street vendors around the city that hides the seam of the dough in the browned bottoms, creating buns of uniform size and shape.

Da Hu Chun, on the other hand, uses the “clear water” technique, in which the twisted seal of dough is left facing up and the half without the seam is fried in oil. The steam and wok-shaking distort these lumpy, twisted buns into

unphotogenic packages (at least compared to the perfectly homogenous buns served at the Yang’s Fried Dumpling chain). But the “clear water” method also allows for a different preparation process. Buns made this way have a thinner dumpling skin and contain less soup, so the focus at Da Hu Chun is really on the meat, juicy bits of pork that are sweetened with secret ingredients that taste just a little bit like peanut sauce – although the workers who hand-wrap the buns in the prep kitchen aren’t telling.

All of the restaurants bearing the Da Hu Chun name serve bowls of thin beef curry soup alongside the buns; the spices in the watery broth cut the sweetness and complement the fried Shanghainese comfort food. At each outlet, there are also a handful of menu benchwarmers that rarely get called up to play, usually variations on Shanghainese spicy meat noodles or “eight-treasures rice.”

The one additional menu standout that really holds its own against the buns and curry soup is Ding Lianfang’s “thousand-layer wonton soup” (丁莲芳千张粉丝汤, dīngliánfāng qiānzhang fěnsī), which is offered at the Yunnan Lu branch. The dish, which received its own stamp of time-honored approval from the government of Huzhou city, is named for the man who created it over a century ago. The soup includes pork and shrimp wonton wrapped in tofu skin (instead of the usual dough wrappers) and translucent noodles made from bean starch floating in a milky pork broth. Buns, wontons and curry soup… It’s no wonder Da Hu Chun has earned the title of “Time-Honored Brand.” 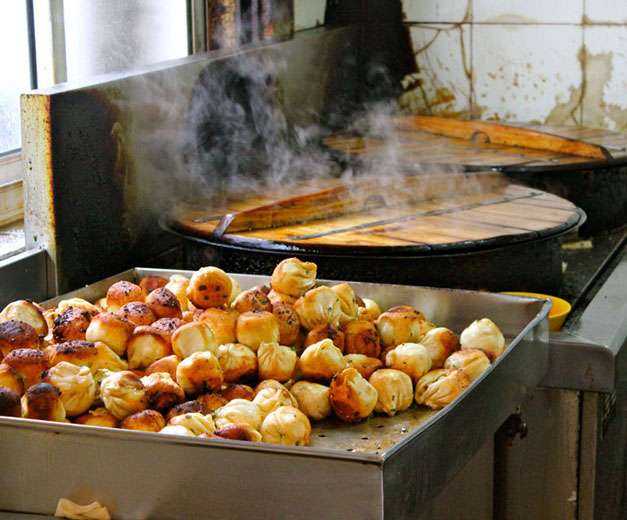 Shanghai | By Jamie Barys
By Jamie Barys
Shanghai -- Shanghai is a street food lovers' paradise, with carts slinging dumplings, pancakes, noodles, buns and grilled meats on sidewalks across the city, morning, noon and night. These are a few of our favorites. 1: Shengjianbao A Shanghai specialty, shēngjiān mántou (生煎馒头) – or shēngjiān bāo (生煎包), as they’re known everywhere else in China – are juicy… 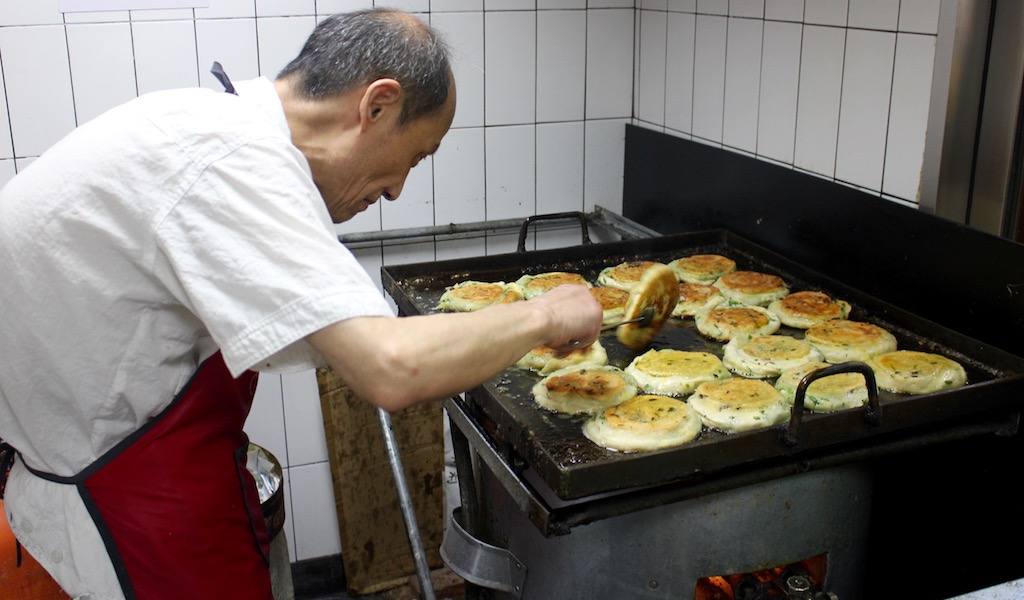 Shanghai | By Jamie Barys
By Jamie Barys
Shanghai -- In September of last year, Shanghai eaters were shocked when Mr. Wu shuttered A Da Cong You Bing, the city’s best scallion pancake shop. The only explanation for the abrupt closure was a worn sign on the door that read: “My family has a problem. The stall will be closed for a few… 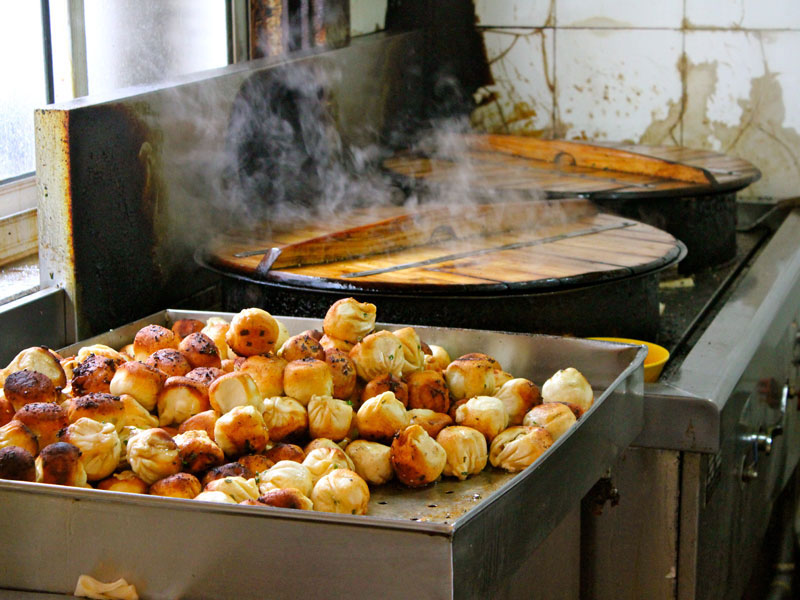 Shanghai | By Jamie Barys
By Jamie Barys
Shanghai -- Editor’s note: This week we are celebrating street food, in all its fascinating, delicious and sometimes offbeat forms. Each day, we’ll take a look at the top street foods in a different city that Culinary Backstreets covers. This feature from Shanghai is the first installment. 1: Shengjianbao A Shanghai specialty, shēngjiān mántou (生煎馒头) – or shēngjiān…