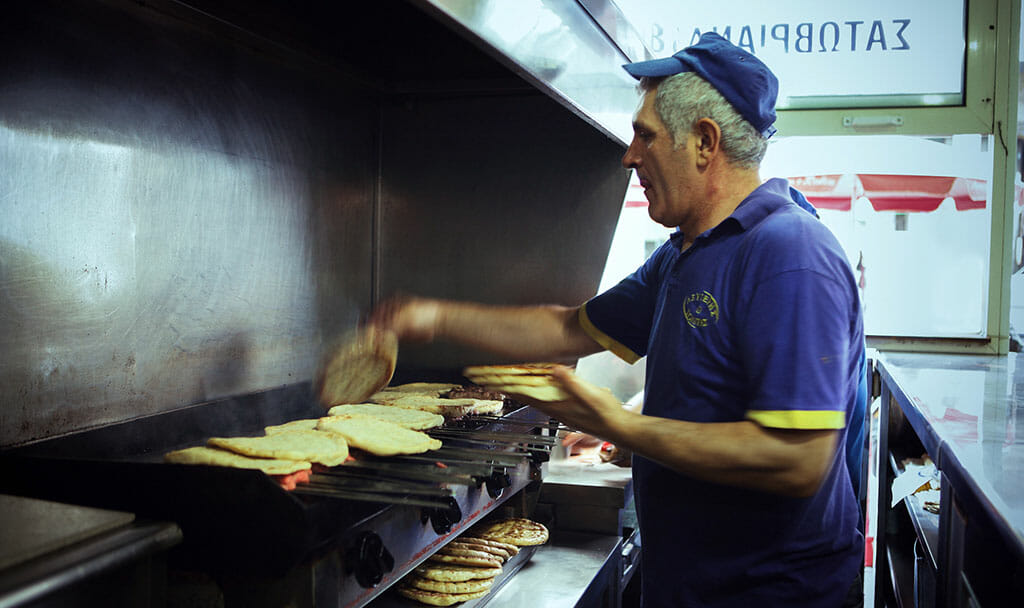 We first wrote about classic souvlaki joints a year and a half ago, and since then, those spots we recommended have only become more popular. We can’t take all the credit, however; as we mentioned in our primer, the humble dish has undergone a renaissance of sorts, and there are now all sorts of places you can find it – from hip and fashionable boîtes to traditional holes-in-the-wall. We’ve rounded up a few more that we love. 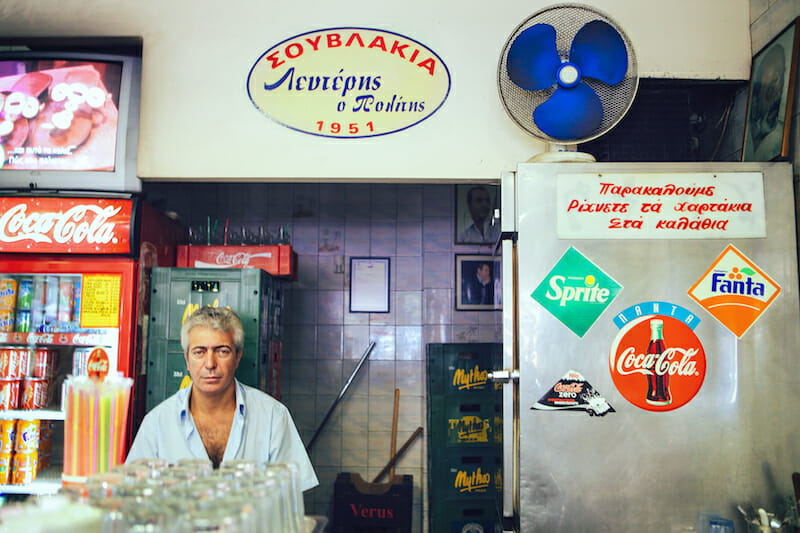 Hidden away in Satovriandou, a neighborhood filled with boarded-up storefronts located right behind Omonia Square, Lefteris o Politis has been in business since 1951 and has been a CB favorite for years. The shop, whose name means “Lefteris who came from Istanbul,” has remained unchanged since it opened. On the walls are old-fashioned Coca-Cola ads, a framed certificate indicating that Lefteris belongs to the trade union of souvlaki makers and a framed portrait of Stelios Kazantzidis, the beloved Greek singer whose tunes were filled with a life of tears, immigration and loss.

Unsurprisingly, there is only one kind of souvlaki on offer here, and it is spectacular. It’s a spicy meat kebab – which makes sense, considering the owner’s origins – made solely of beef, unlike most kebabs, and cooked on a traditional grill. It’s a dish for purists: beef kebab, tomato, thinly sliced onion and parsley wrapped in grilled pita. Despite the lack of sauce, the whole package is surprisingly spicy and succulent.

Giorgos-Manos is much less well known and a totally different animal. It’s located in Exarchia, Athens’ most turbulent yet interesting neighborhood, and a hub for intellectuals and students alike. Named after the owners, it’s the rare souvlaki joint that keeps banking hours. The only thing worth noting about the locale or décor is how little there is to note. Giorgos-Manos has the typical souvlaki joint setup, with wood paneling, some pictures from old Greek movies on top of the grill, a few seats and an extremely loyal clientele. Although Athenians like to eat their lunch late, this place is packed from 11 a.m. onwards. 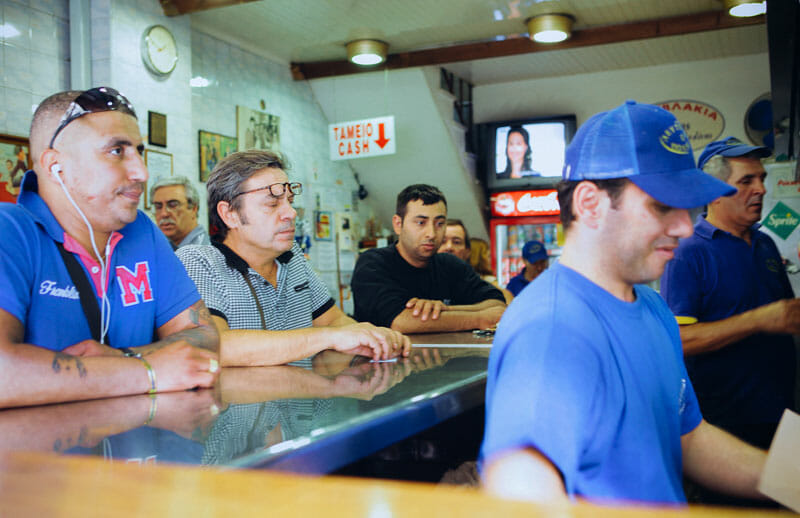 The souvlaki offerings are plentiful. The pork and chicken gyro and kalamaki (skewered pieces of meat) are very popular, but Giorgos-Manos’s specialty is the hard-to-find kontosouvli, large chunks of pork usually from the upper shoulder that are marinated for at least 12 hours in anything from onion juice to oregano, garlic or paprika and then placed on skewers. They offer a chicken kontosouvli as well, but we prefer the old-fashioned original, and we recommend getting it wrapped in pita with tzatziki, onion and parsley.

Whether we’re talking kontosouvli or kebab, one thing is for sure: Athenians are more passionate about their souvlaki than ever. A Greek lifestyle magazine recently devoted an entire article to whether it is sacrilegious or not to include fries in a pita-wrapped souvlaki. In the end, opinion was split. Some things, after all, are a matter of taste. 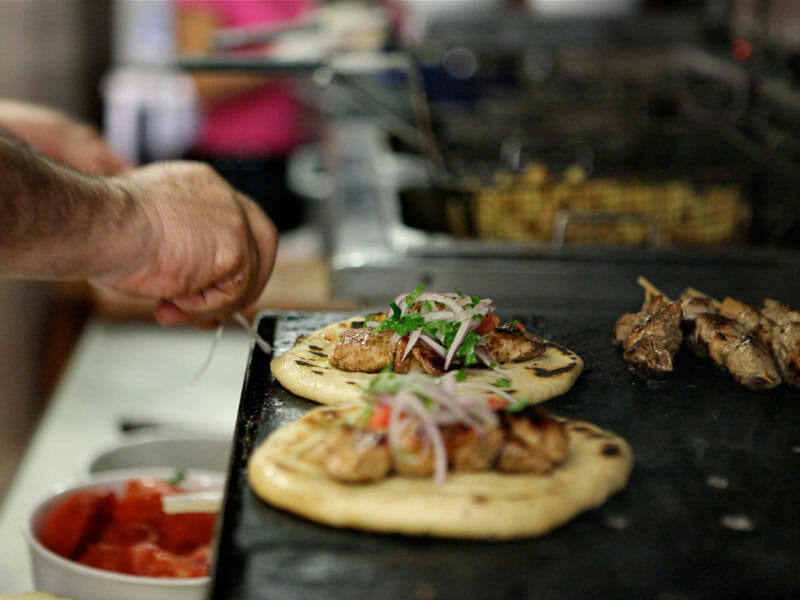 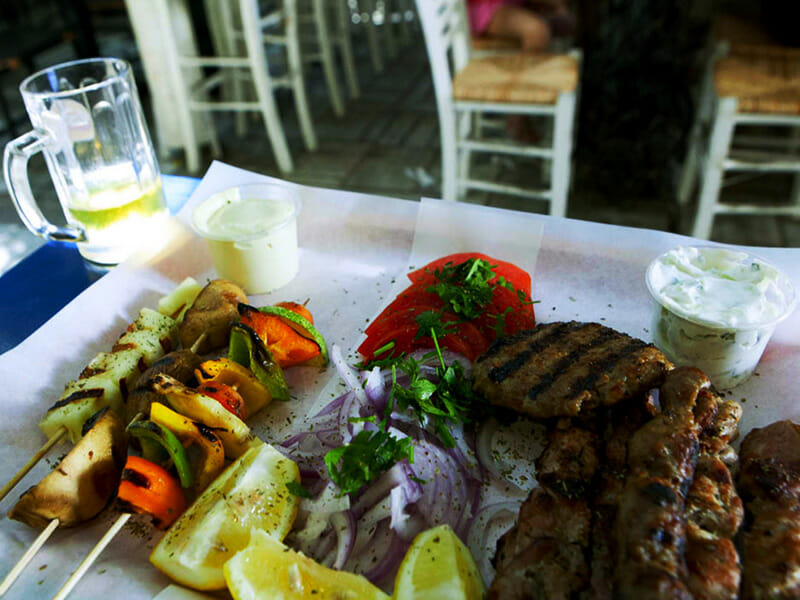 Athens | By Despina Trivolis
By Despina Trivolis
AthensIn the ’90s, as the first American burger and pizza chains began appearing all over Athens, it looked like the humble souvlaki was not the takeaway or delivery option of choice anymore. Luckily, the past 10 years have seen a huge comeback of souvlaki. Neo-souvlaki places that looked nothing like the greasy joints of the…

Athens | By Johanna Dimopoulos
By Johanna Dimopoulos
AthensIn the center of Exarchia, a hub of activism often referred to as the “anarchist” neighborhood of Athens, a small minimalist eatery with just a few tables outside opened last April and was an instant success by breaking all the rules. At first glance it looks like a regular souvlaki shop, with sauces and condiments…
Downtown Athens Souvlaki Classics, Part 2