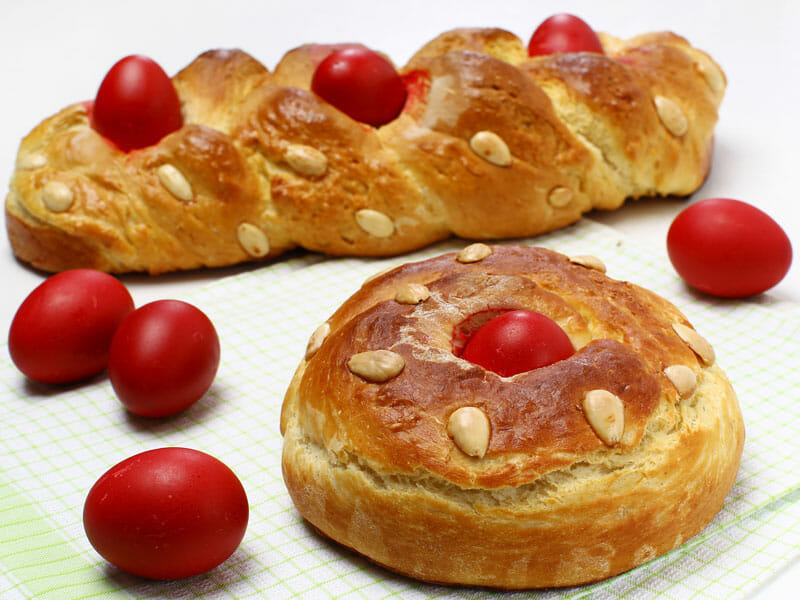 Forget about Christmas. In Greece, Easter is the main event, one where food, naturally, plays a starring role. It is also very much a holiday celebrated in the countryside: most Athenians go back to their villages during the holiday to be with their extended family and enjoy the Easter-related culinary delights of their home region.

After Greek Orthodox Lent, which lasts for 40 days starting on Lent Monday, Greece observes Holy Week, which leads up to Easter. (Orthodox and Western Easter only rarely fall on the same day, and the date of Orthodox Easter – which is May 5 this year – is calculated by a bizarre algorithm too complicated to explain here.) Holy Week is meant to be a period of “fasting” (that is, no meat or dairy products) for Orthodox Christians. Since many people in Greece observe it, there are even special Lent dishes at local fast food joints, and restaurants can be quite inventive. A favorite souvlaki place on the island of Corfu, for example, offers the option of a veggie souvlaki filled with zucchini fritters instead of meat.

While the rich culinary traditions associated with Easter vary somewhat from region to region, a number of customs have evolved during Holy Week that are typical throughout Greece. On Holy Thursday, most Greek families boil and dye at least a dozen eggs in a deep red color, symbolizing the blood of Christ. Nowadays, most Greeks use artificial dyes (our own favorite brand is Anatoli), although some prefer to use onion skins or beet juice to avoid using an industrial dye; the result is usually dark pink but still quite pretty. 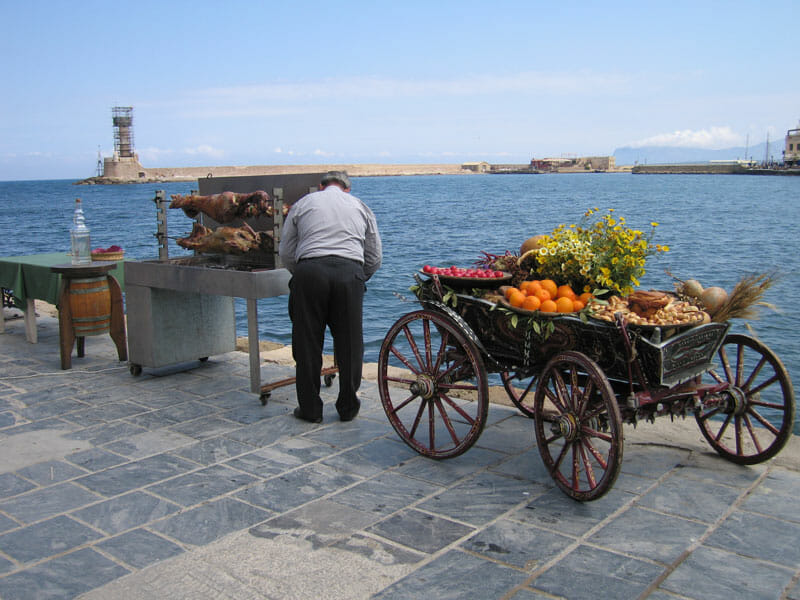 Tsoureki, a sweet Easter bread, is another food prepared during the traditionally frugal Holy Week. Although tsoureki is eaten year-round in Greece, Easter tsoureki is usually shaped into braids and decorated with a bright red egg on top. Made with a lot of eggs and yeast, the airy, white bread has a distinct aroma that usually comes from one of two ingredients (or sometimes both). The first is mastic, a highly aromatic plant resin with a vaguely pine-like smell that is only produced on the island of Chios in the Aegean. Mastic is used in all sorts of ways in Greece but mainly in chewing gum, cooking and liqueur. Alternatively, some recipes use mahlepi, a powdered spice that is made from ground red cherry seeds and tastes like bitter almond or bitter cherry. Tsoureki is always delicious, regardless of which flavoring is used.

The official kickoff for the meat-fest that is Greek Easter comes right after the church service observing the resurrection of Christ on Saturday night. Just after midnight, Greeks come home from church and first indulge in a game of tsougrisma, or egg-tapping, with their red eggs. Each person holds an egg and taps the eggs of others in the family. Whoever manages to break the other eggs without breaking their own is the winner. (Not surprisingly, this game usually awakens a competitive streak among a lot of participants, and fights have been known to break out when illicit tactics are used.)

After the egg-tapping, a special soup called magiritsa is eaten. The soup is made with lamb innards – any or all of the intestines, heart and liver, as well as the neck and the head (it really depends; each family uses the parts they prefer) – essentially, the organs that will not be cooked on a spit later. The other ingredients are dill, lettuce, onion and, traditionally, avgolemono, an egg and lemon juice broth (although some prefer the soup without the avgolemono). The soup is thick and full of flavor but is definitely a “love it or hate it” kind of dish.

But the food associated more than anything with Orthodox Easter is, of course, lamb cooked outdoors on a spit, a dish that has both Christian and ancient Greek roots. Choosing a lamb, putting it on a spit and cooking it over coals is quite a complicated procedure and is certainly not for novices. It usually takes hours for the lamb – which is regularly doused with olive oil, lemon, thyme and dill – to cook through, so the process starts as early as 7 a.m. on Easter morning. The typical Greek family enjoys Easter outdoors next to the spit, a scene rounded out with loud traditional music, wine, children playing and male family members arguing over who should be in charge of turning the spit (placing men next to any sort of barbecue is always slightly risky all over the world, and Greece is no exception). By the time the lamb is ready, everyone is tipsy and has already done a lot of nibbling at the petsa (the crackling skin of the lamb), the roast potatoes, the feta cheese and the salad. It’s a ritual that gets repeated year after year and one that we suspect – like the roasting of the lamb itself – has very deep roots. 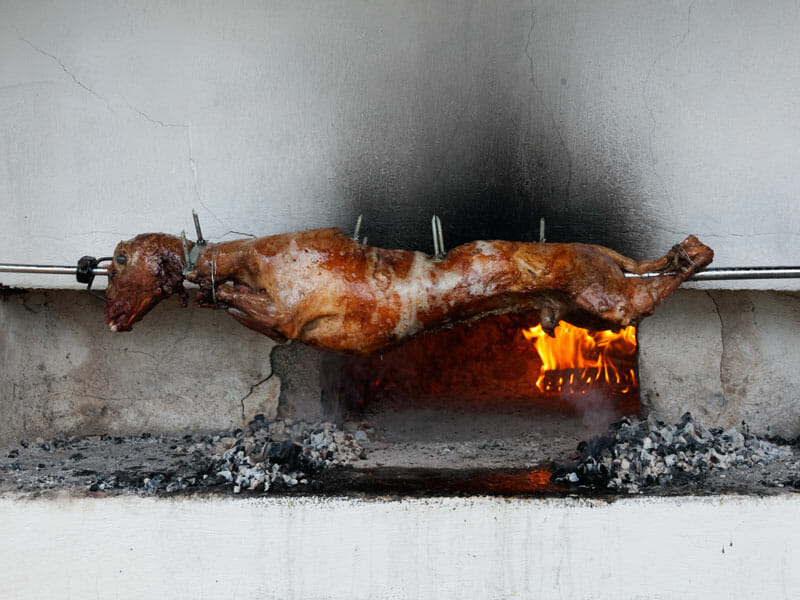 Unlike most other Greek Easter delicacies, tsoureki can be found year-round. For a good old-fashioned tsoureki flavored with mahlepi, try Asimakopoulos in Exarchia. One of the best patisseries in Athens, Asimakopoulos draws people from all over the city to sample their delicacies. Lido, a small, old-fashioned place in Pagrati that you’d probably never cast a second glance at if you weren’t looking for it, is another venue famous for its traditional tsoureki, which also comes in a chocolate flavor and a Lent variety (no eggs, or butter). For a more upscale version (not necessarily special to Easter), there is Terkenlis in the northeastern suburb of Chalandri, which makes the most famous tsoureki in Greece. A mini chain first started in Thessaloniki, Terkenlis is famous for its tsoureki covered in chocolate, lemon and, of course, chestnut cream – a calorie explosion that is more like a dessert than a bread, but is worth every bite.

For an Easter meal after midnight on Saturday, Ideal, an old-fashioned downtown Athenian stalwart, is a good choice. The restaurant offers magiritsa and an Easter menu amidst a setting of art nouveau décor. During the rest of the year, Papandreou, located inside the main meat market, is probably the only place in Athens that does magiritsa on a daily basis. Open 24 hours, every day of the week, Papandreou is a true Athenian institution, offering a wide variety of soups for those who have been up all night. 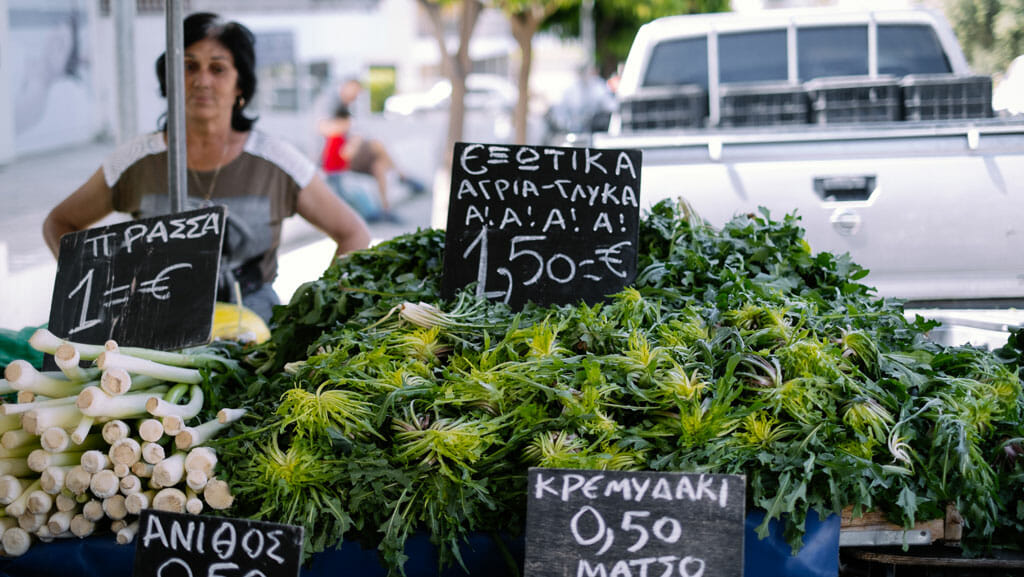 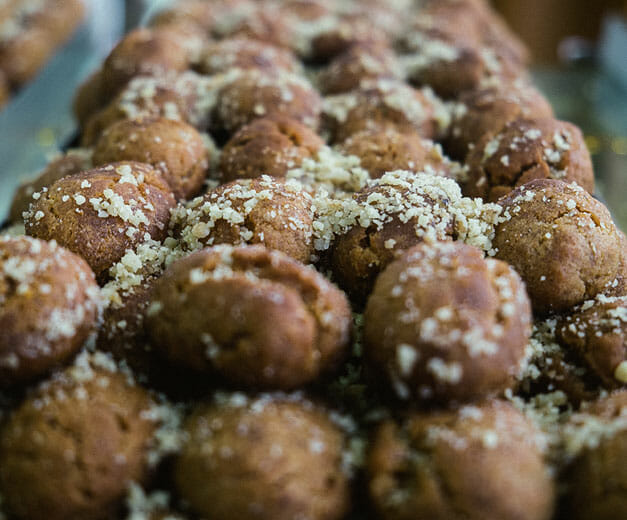 Athens | By Christiana Thomaidi
By Christiana Thomaidi
AthensThe debate rages on: which are Greece’s best traditional Christmas cookies, kourambiedes or melomakarona? Amongst our friends and family, moist, honey-soaked melomakarona win out over the crumbly, butter-rich almond kourambiedes. The word “melomakarona” is a combination of meli, which means “honey,” and makaronia, which comes from the ancient Greek word makaria (μακαρία), meaning “blessed” (and… 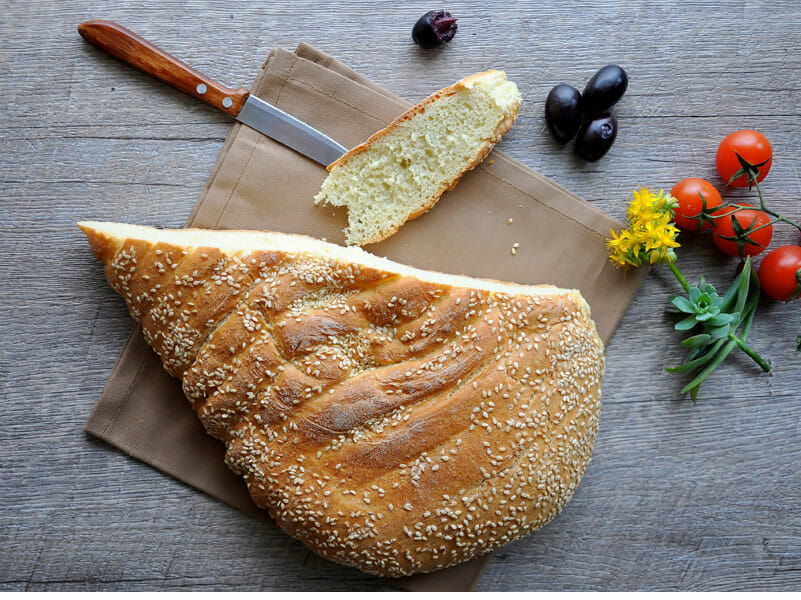 Ask CB: The Food of Lent Monday in Greece?

Add to favorites
The Food of Greek Easter in Athens